iOS 9 marked a significant milestone for the iPad platform. In contrast with previous iPhone interface adaptations, iOS 9 did away with longstanding preconceptions and allowed the iPad to reach beyond the comfort of familiarity with the iPhone’s experience.

Shedding the vestiges of intrinsic iPhone OS notions – namely, single-tasking through one app at a time – the combination of more capable hardware with features such as Split View and Picture in Picture inaugurated a new beginning for the iPad’s post-PC endeavors. iOS 9 reset the iPad’s expectations and potential, providing millions of disenchanted users with the modern, powerful PC replacement they’d been envisioning since 2010.

But in many ways, iOS 9 wasn’t enough. The productivity enhancements that set the iPad on a new course felt, in hindsight, like first attempts at reviving its software and app ecosystem. Key aspects of iOS 9 were evidently unfinished, possibly hinting at future optimizations and fixes.

That future didn’t arrive with last year’s iOS 10, which only added to the sense of wondering when the iPad’s next shoe would drop. Amidst consistently declining unit sales and following another bland (at least iPad-wise) mid-cycle update to iOS, the legacy of iOS 9 gradually shifted from a first step packed with promise to a bittersweet one-off effort to infuse new life into the iPad.

PDF Viewer is the easiest way to read, edit, and sign PDFs on the go.

With iOS 11, Apple’s iPad vision feels resolute again. Multitasking is blending with multitouch, giving drag and drop a new purpose; the Mac’s best features – from file management to the dock – have been rethought, simplified, and extended specifically for iOS. The iPad’s mission is to reimagine the very concept of a portable computer by empowering a new generation of users to do their best work wherever they are, whenever they want.

If anything, iOS 9 was merely the iPad’s overture.

The iPad, however, is only one part of the broader iOS story, which has been – and most likely always will be – characterized by the iPhone’s evolution and impact on our society.

From that standpoint, not only did iOS 10 deliver with upgrades to core iPhone apps such as Photos, Messages, Music, and Maps – it showed how Apple was judiciously planting the seeds for technologies and human interface guidelines that are blossoming in iOS 11. The two-pronged approach of iOS 10 – updates to consumer apps along with the first signs of native iOS machine learning – resulted in an iPhone update that felt impactful without the need for a ground-up redesign.

For the most part, iOS 11 follows the playbook of last year. The transition to a new design language is still in flux, with a progressive remodeling of iOS 7’s divisive aesthetic and the adoption of friendly UI elements that can guide users across the system. iOS 11’s most notable redesigns, including the App Store and Control Center, lay new foundations and fix what didn’t work before. Refinements – in some cases, reversals of ideas that didn’t pan out – are one of iOS 11’s overarching themes.

iOS 11 presents a cohesive narrative for both the iPad and iPhone.

iOS 11 also reaps the rewards of investments Apple made in iOS 10 and 2016’s iPhone line. From the upcoming wave of augmented reality apps to deeper computational photography and new responsibilities for iCloud, iOS 11 epitomizes – with remarkable accomplishments and a few missteps along the way – the focus and priorities of the modern Apple.

But perhaps more importantly, unlike iOS 10, iOS 11 presents a cohesive narrative for both the iPad and iPhone. A story where, for the first time in years, the iPad is informing some of the design principles and features of the iPhone’s software. Even from different angles, and each with its own past struggles, both acts in iOS 11 end up asking the same question:

Where does the modern computer go next? 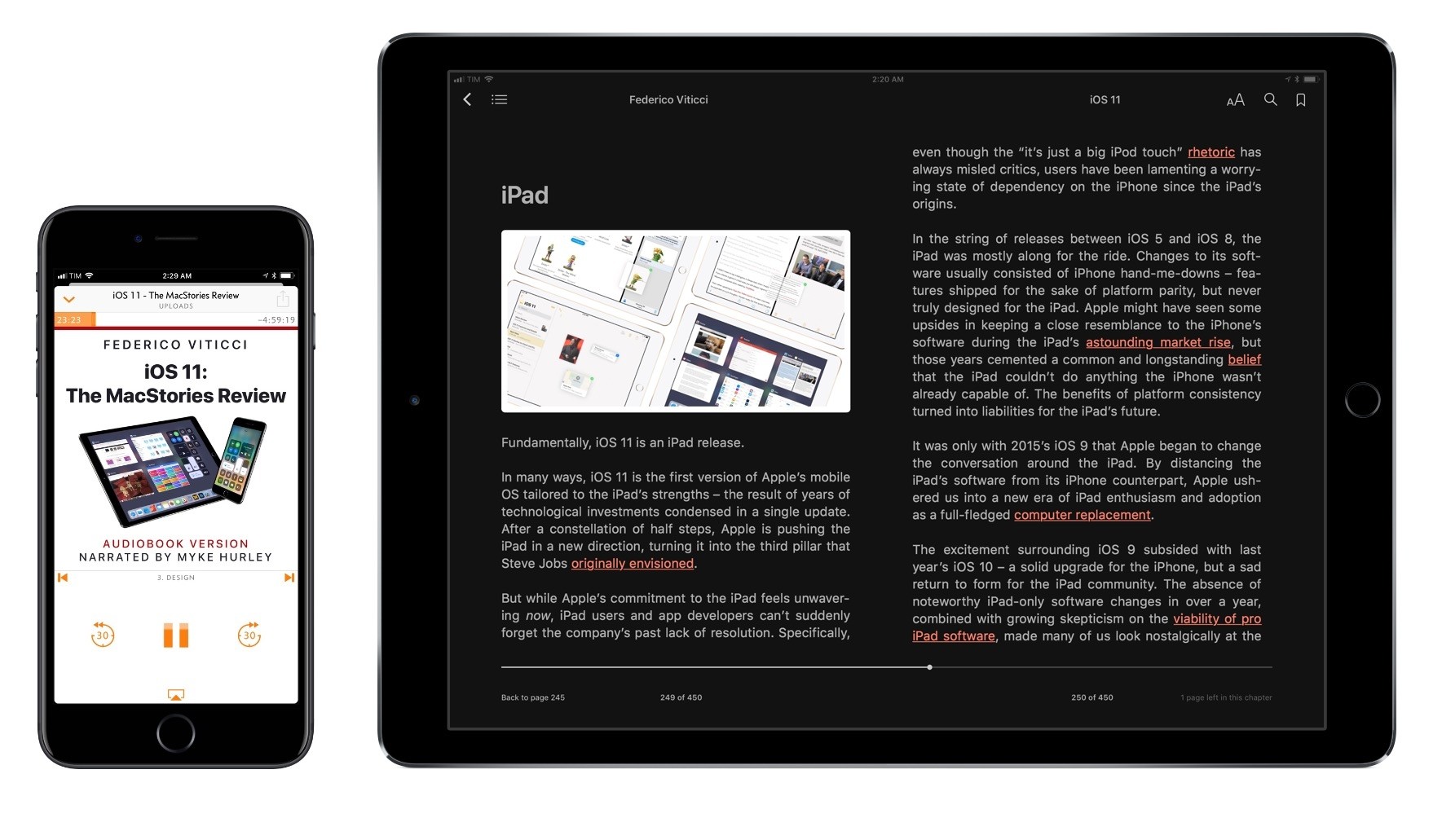 For the first time, our iOS review is also available as an eBook and audiobook.

Club members will also get access to an exclusive Making Of with a behind-the-scenes look at the review later this week. The Making Of will detail how this review was produced and edited by Federico and the rest of the MacStories team.

In addition, this year we are offering an audiobook version of the review, available separately at $9.99. The audiobook has been narrated by Relay FM’s Myke Hurley, and it features over 5 hours of spoken content provided as a single MP3 file with chapters for easier navigation.

By being a Club member, you’ll get access to an exclusive discount: you can get the audiobook at 60% off the regular price – only $3.99. Instructions to use the promo code are also available in the member Downloads area. You can listen to a free preview of the Introduction chapter from the audiobook below.

You can get the iOS 11 review audiobook here.