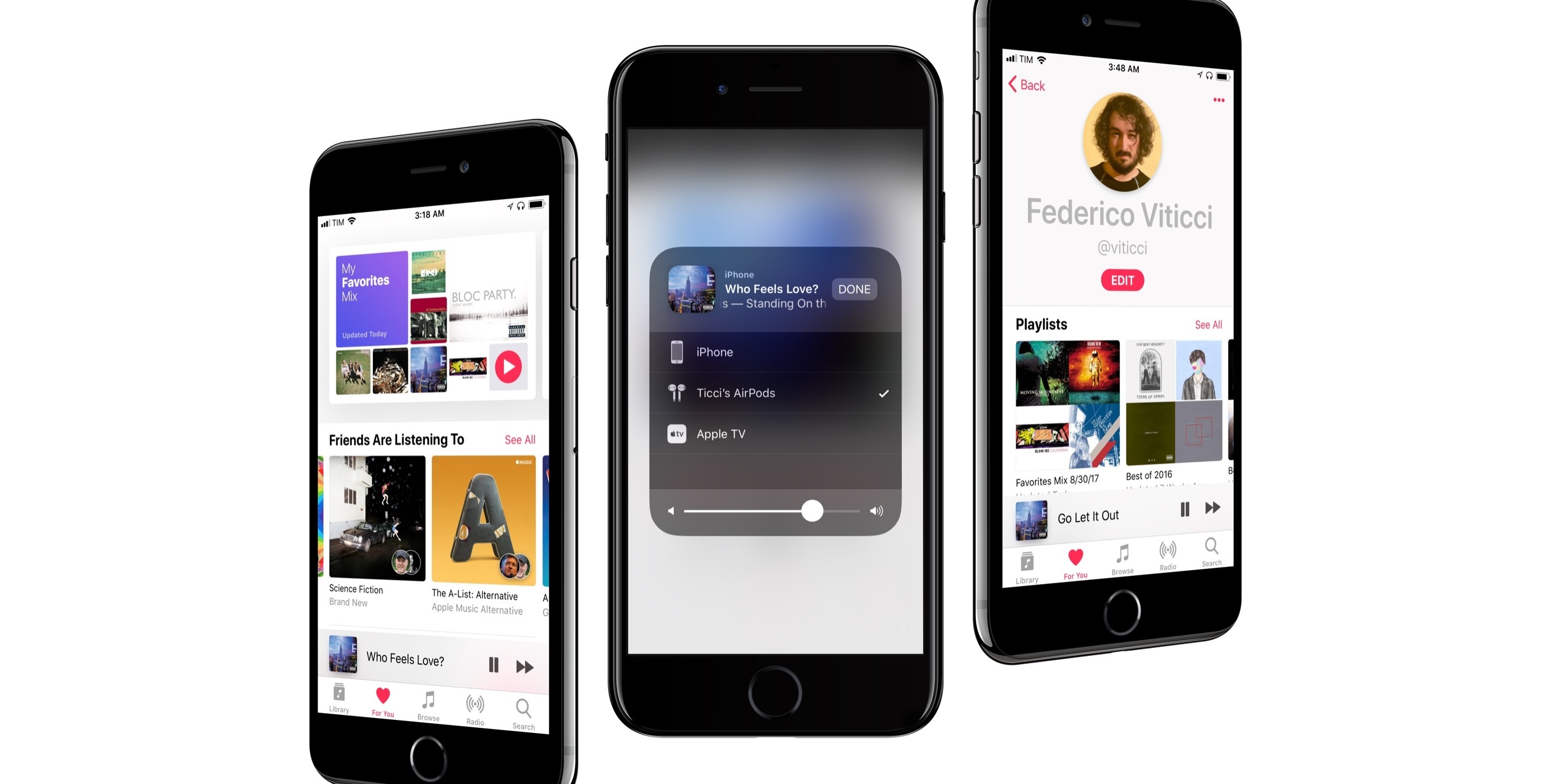 Time and time again, Apple has proven to be technically inept at building social networks. From the spectacular failure of Ping to the unceremonious demotion of Apple Music’s Connect, Apple has a history of misunderstanding social network mechanics and overestimating their skills in maintaining and scaling a social infrastructure for millions of users. Which is exactly what makes the effectiveness of Apple Music’s new social features all the more surprising.

With iOS 11, Apple realized what Rdio (forever in my heart) figured out years ago: people don’t want a quasi-Facebook product, that isn’t actually Facebook, in their music streaming service. Music streaming has become a commodity differentiated by hardware integrations, curation, and perhaps video. Music lovers only care about one thing in relation to other people on the same service:

”What are my friends listening to?”

That’s what Apple built in iOS 11. Apple Music subscribers can now create a profile for other users to follow. A profile can be public (anyone can start following you) or private (you have to approve new followers). There are no posts or status messages whatsoever: all you can broadcast is your listening activity (albums, playlists, and radio stations), which will automatically show up in a Listening To section on your profile. You can also make playlists you’ve created appear on your profile and in search results, but you still can’t create collaborative playlists with other users.

Your profile is accessed from the avatar in the upper right corner of the For You page. The following/follower approach is a basic one: you can share a unique iTunes link to your profile, and find friends sharing their listening activity by scanning your iOS contacts or by logging into your Facebook account.

John and Christina have great taste.

Music suggests other users after you start following someone.

Not only does Kyle star in Apple commercials – he also has great taste in music.

You can find more people to follow by tapping this button.

What makes Apple’s latest social music effort work is its focus on quality rather than quantity. There are no unread badges for friend updates – just a scrollable section towards the top of For You to see music your friends have been listening to. It’s a beautiful system with no comments, follower counts, or re-shares – just music.29

The keystone of this experience isn’t visiting a friend’s profile (though that’s possible) – it’s browsing the coalesced gallery of every album or playlist your friends have been into lately. This screen – effectively mirroring the old Rdio feature – catches two birds with one stone: it gives you a summary of what’s trending among people you care about, and it cuts to the chase by making music front and center. Friends are represented by tiny avatars on the corner of an album; they disappear once you tap them because they’re merely a conduit to new music.

As someone whose music taste is (and always has been) all over the place, I appreciate a straightforward social mechanic that lets me discover music from people I trust without the pressure of tending to another social feed. There is no social network layer pushing me to actively “share” my taste in music; it all happens automatically in the background. There’s beauty in these intentional constraints, which Apple tastefully stole from Rdio and repackaged in a 2017 product.

I haven’t been able to test apps supporting the new MusicKit framework yet, but it’s an important addition to the Apple Music ecosystem.

MusicKit, Apple’s response to the popular Spotify web API, allows iOS apps to integrate with the Apple Music service for metadata retrieval as well as streaming content. MusicKit enables apps to integrate with Apple Music and get access to artists, albums, songs, playlists, and even activities and curators. The MusicKit API returns JSON results and supports discovery operations such as search, charts, and personalized recommendations. To do this, iOS 11 has a new music permission dialog with a purpose string that explains why an app wants to access your Apple Music library and account.

I expect MusicKit to spark a creative, diverse ecosystem of music utilities – from alternative clients that stream songs saved in your library (if Apple allows them on the App Store) to fitness apps with deeper Apple Music integration.30 It’ll be interesting to see if MusicKit becomes as popular as the Spotify API – at least on the iOS App Store.

AirPlay 2 is another iOS 11 technology that’s difficult to test at this stage. A successor to the wireless protocol rolled out by Apple in 2010, AirPlay 2 improves upon the original in significant ways: it supports multi-room wireless audio, Shared Up Next for multiple Apple Music users, and system routing for regular and longform audio apps. To use AirPlay 2, you’ll need speakers compatible with the new protocol, which I haven’t been able to test as they aren’t available on the market yet.31 As for software, developers have to adopt new AirPlay APIs to use these features in their apps – the transition from the original AirPlay is not an upgrade they get “for free”.

With iOS 11 and AirPlay 2, developers of audio apps can mark them as sources of longform audio content. These can be music players, podcast clients, and audiobook readers. A longform audio app combined with AirPlay 2 streaming gains enhanced buffering (up to several minutes, so you can walk around the house without audio dropping after a few seconds) and it doesn’t get interrupted by system alerts such as message notifications or FaceTime calls. Sonos has long offered both features with their custom audio engine; Apple is going after the same experience with AirPlay 2 (which will also power the HomePod later this year). If you’re listening to a podcast on your living room speakers and an iMessage comes in, its “ding” sound will no longer cover the conversation; a phone call won’t pause music while you’re having dinner with friends.

To integrate with AirPlay 2 and directly select wireless audio sources, apps must use the native AirPlay picker UI. An example of this can be seen in the Music app, which has to display a dark, translucent popup even though neither gray nor transparency are part of the Music app’s design language anymore. 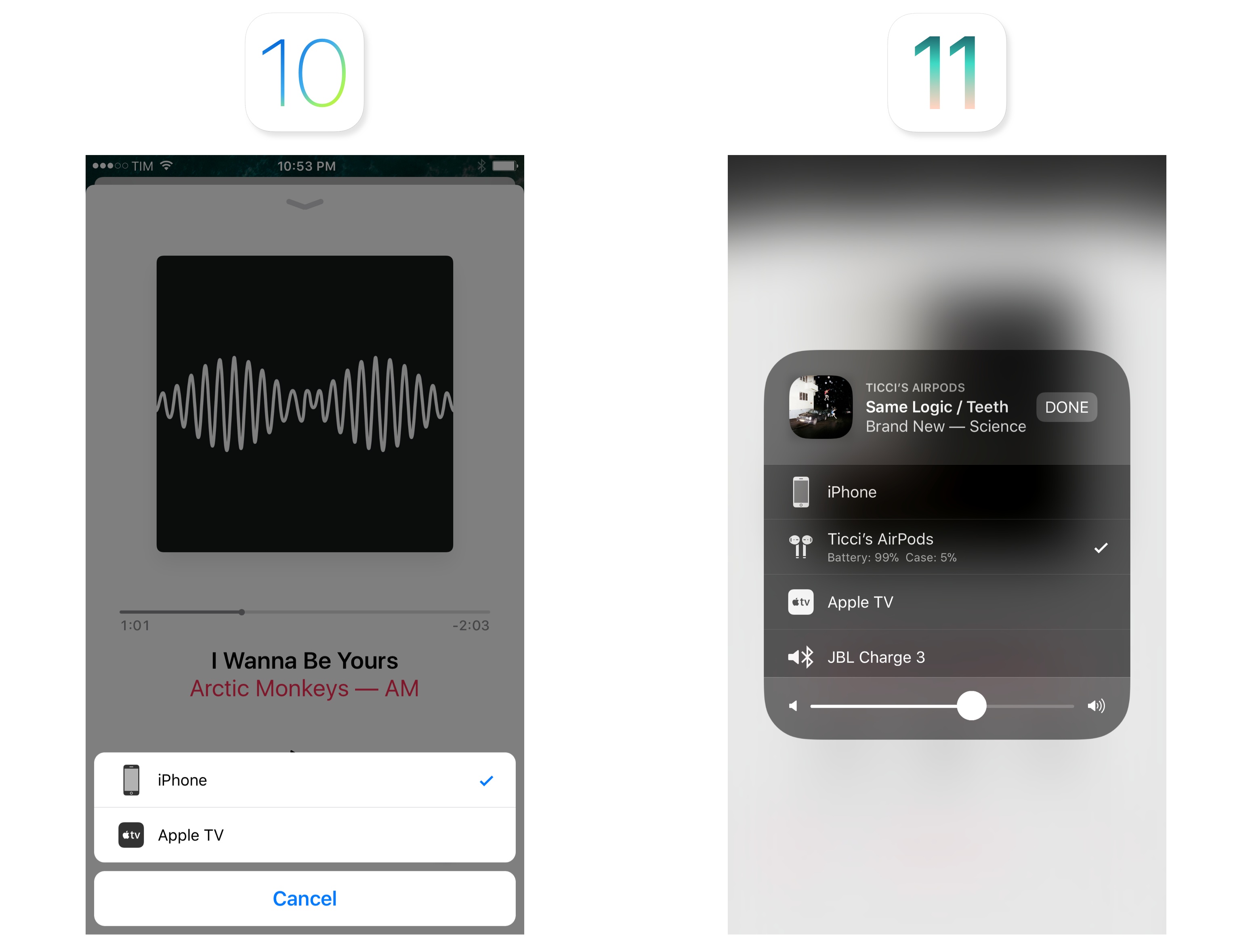 I suspect that most music players and podcast apps will soon support AirPlay 2 with longform routing. The benefits of improved streaming and multi-room technology are too strategically important to be ignored, likely resulting in a rich ecosystem of AirPlay 2-compatible apps ready for the HomePod’s launch in a few months.

Apple appears to be mostly content with the state of the Music app, ignoring drastic UI changes this year in favor of differentiation via content and social recommendations. Time will tell if the company’s plan will pay off and close the gap between Apple Music and Spotify’s subscriber base. As an iOS app, I still think Apple Music is superior to Spotify; the jury’s still out on which curation and discovery approach will eventually win – if there’s ever going to be a single winner in the streaming industry.