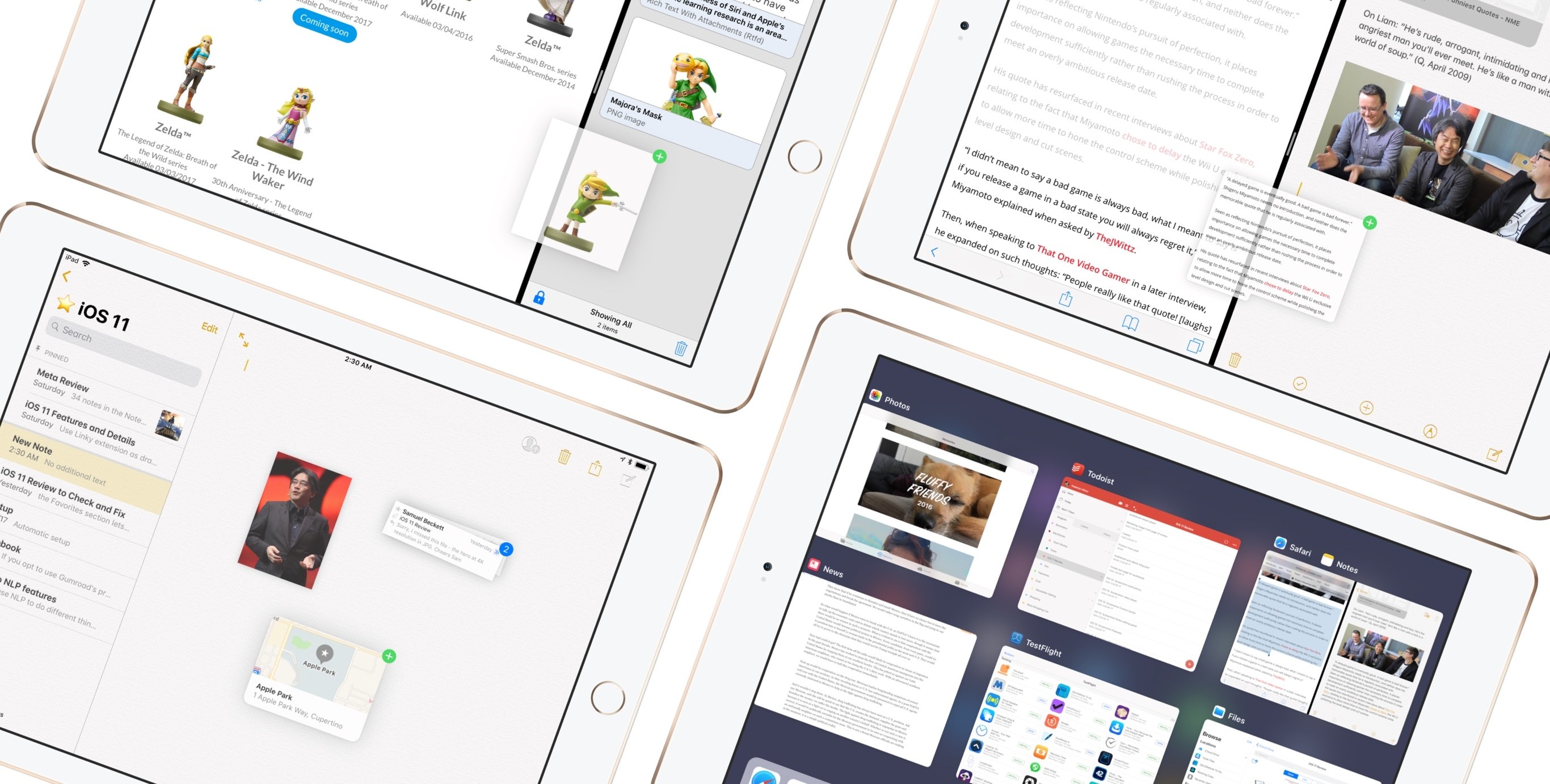 Fundamentally, iOS 11 is an iPad release.

In many ways, iOS 11 is the first version of Apple’s mobile OS tailored to the iPad’s strengths – the result of years of technological investments condensed in a single update. After a constellation of half steps, Apple is pushing the iPad in a new direction, turning it into the third pillar that Steve Jobs originally envisioned.

But while Apple’s commitment to the iPad feels unwavering now, iPad users and app developers can’t suddenly forget the company’s past lack of resolution. Specifically, even though the “it’s just a big iPod touch” rhetoric has always misled critics, users have been lamenting a worrying state of dependency on the iPhone since the iPad’s origins.

In the string of releases between iOS 5 and iOS 8, the iPad was mostly along for the ride. Changes to its software usually consisted of iPhone hand-me-downs – features shipped for the sake of platform parity, but never truly designed for the iPad. Apple might have seen some upsides in keeping a close resemblance to the iPhone’s software during the iPad’s astounding market rise, but those years cemented a common and longstanding belief that the iPad couldn’t do anything the iPhone wasn’t already capable of. The benefits of platform consistency turned into liabilities for the iPad’s future.

It was only with 2015’s iOS 9 that Apple began to change the conversation around the iPad. By distancing the iPad’s software from its iPhone counterpart, Apple ushered us into a new era of iPad enthusiasm and adoption as a full-fledged computer replacement.

The excitement surrounding iOS 9 subsided with last year’s iOS 10 – a solid upgrade for the iPhone, but a sad return to form for the iPad community. The absence of noteworthy iPad-only software changes in over a year, combined with growing skepticism on the viability of pro iPad software, made many of us look nostalgically at the days of WWDC 2015 and iOS 9 – a moment in time when the post-PC promise felt within our reach.

iOS 11 shows that perhaps we’ve been looking at the iPad’s trajectory from a distorted angle – guilty of framing our expectations with an iPhone model that the iPad can’t follow. Maybe the iPad doesn’t need to be in the same lane as the iPhone, advancing at the same speed every year. As iPad users, maybe we shouldn’t expect the future to be reinvented on an annual basis.

More than a follow-up to iOS 9, iOS 11 feels like a reintroduction of the iPad seven years after its launch. It would have been easier for Apple to take what worked in iOS 9 and smooth it out around the edges, releasing a spiritual “iOS 9.5”. A lot of iPad-only users would have been satisfied with such a release.

But Apple has bigger ambitions. With the tablet industry at an inflection point, iOS 11 sets the iPad on a bold, adventurous mission: