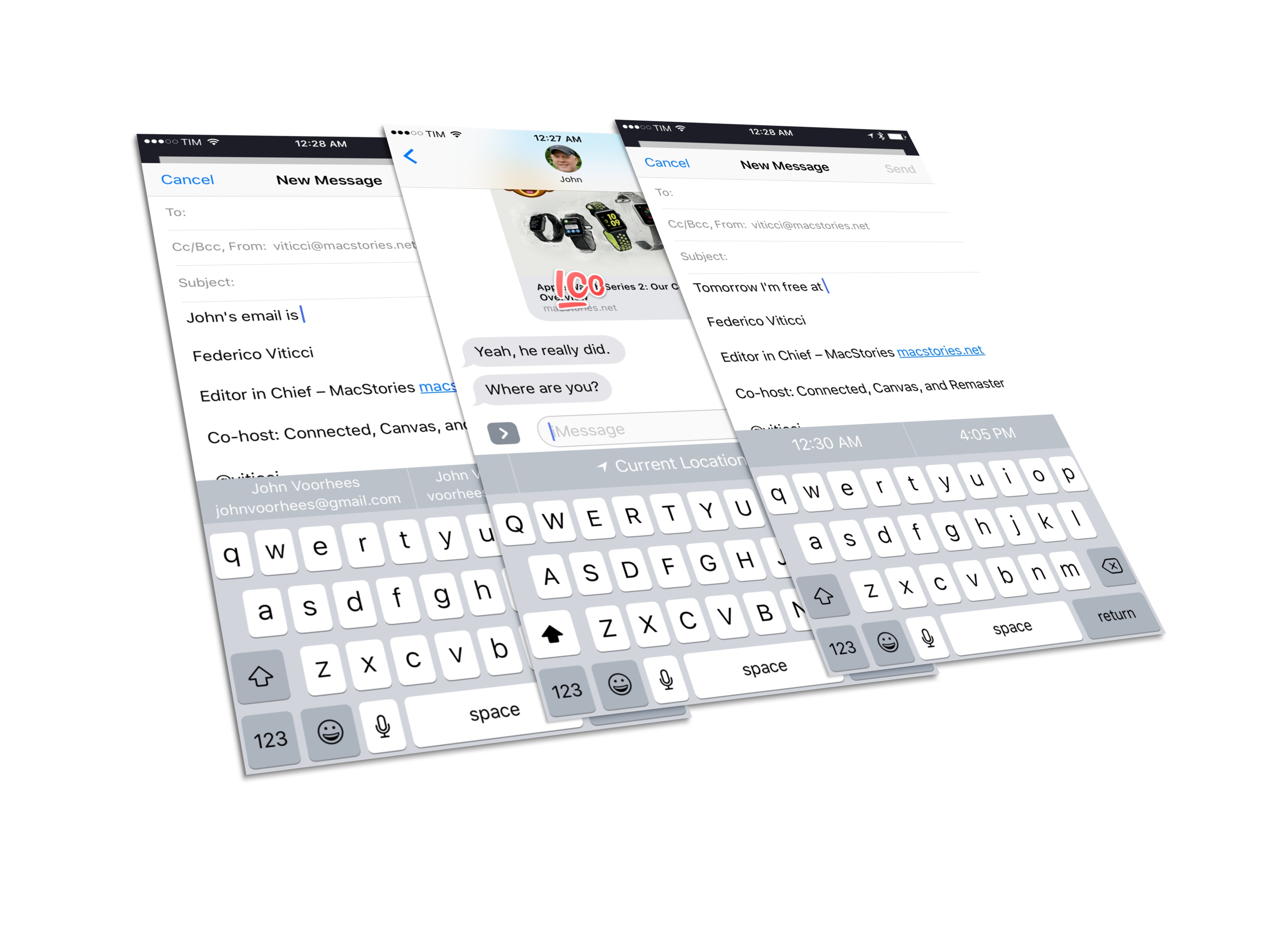 iOS’ Proactive assistant, introduced last year as a set of suggested shortcuts for apps based on user habits and context, is expanding to locations and contacts in iOS 10, and gaining a foothold in the system keyboard.

If you’re in an iMessage conversation and someone asks you for a contact’s phone number or email address, iOS will automatically put that suggestion in the QuickType keyboard for one-tap insertion. It doesn’t have to be a reply to an existing message: if you compose a new email and type “[Name]’s phone number is”, QuickType will also proactively suggest the phone number from your address book. 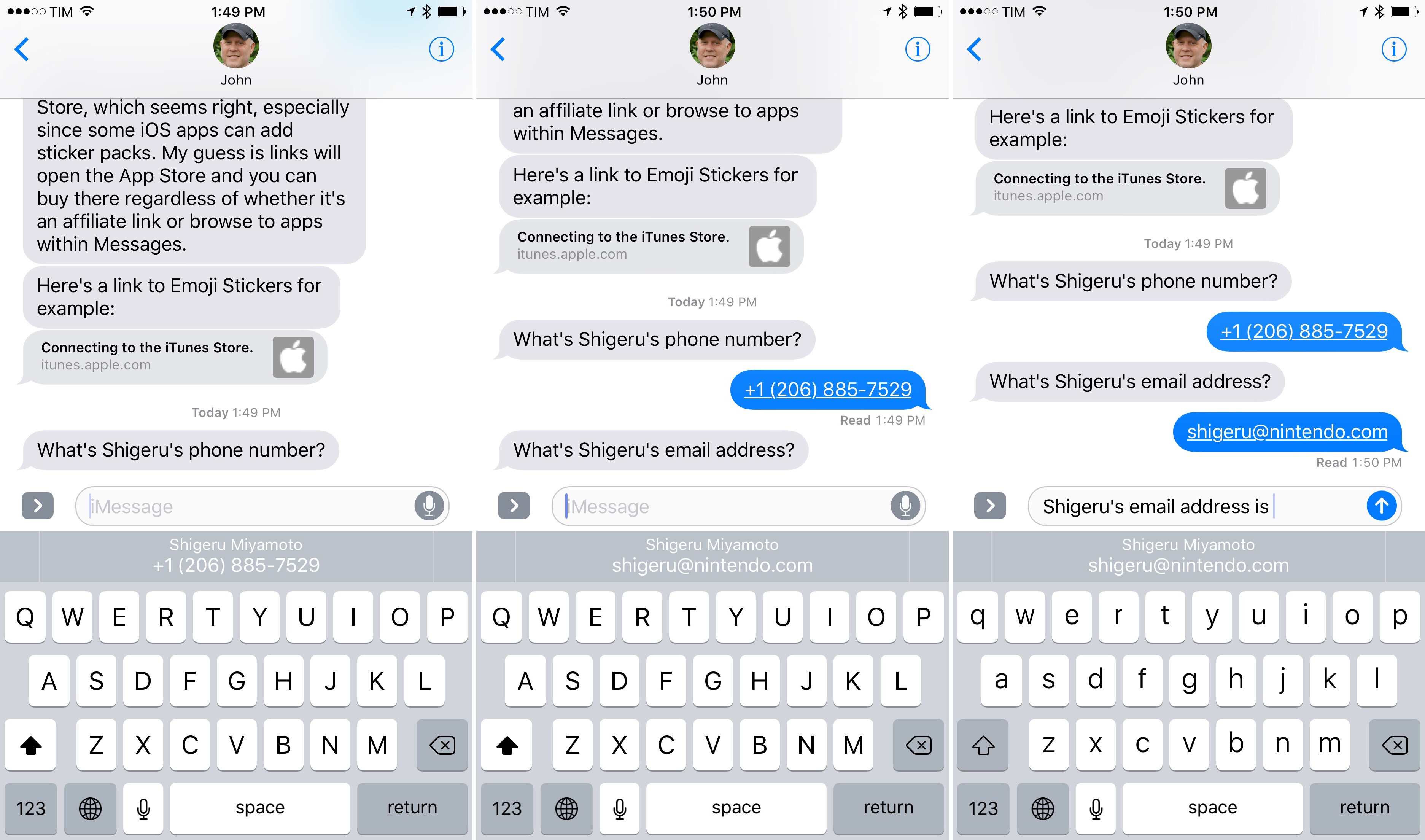 Even more impressively, if someone asks “Where are you?” on iMessage, QuickType will show a button to send your current location. Tap it, and a Maps bubble will be sent; the other person can tap it to open a full-screen preview and get directions.74 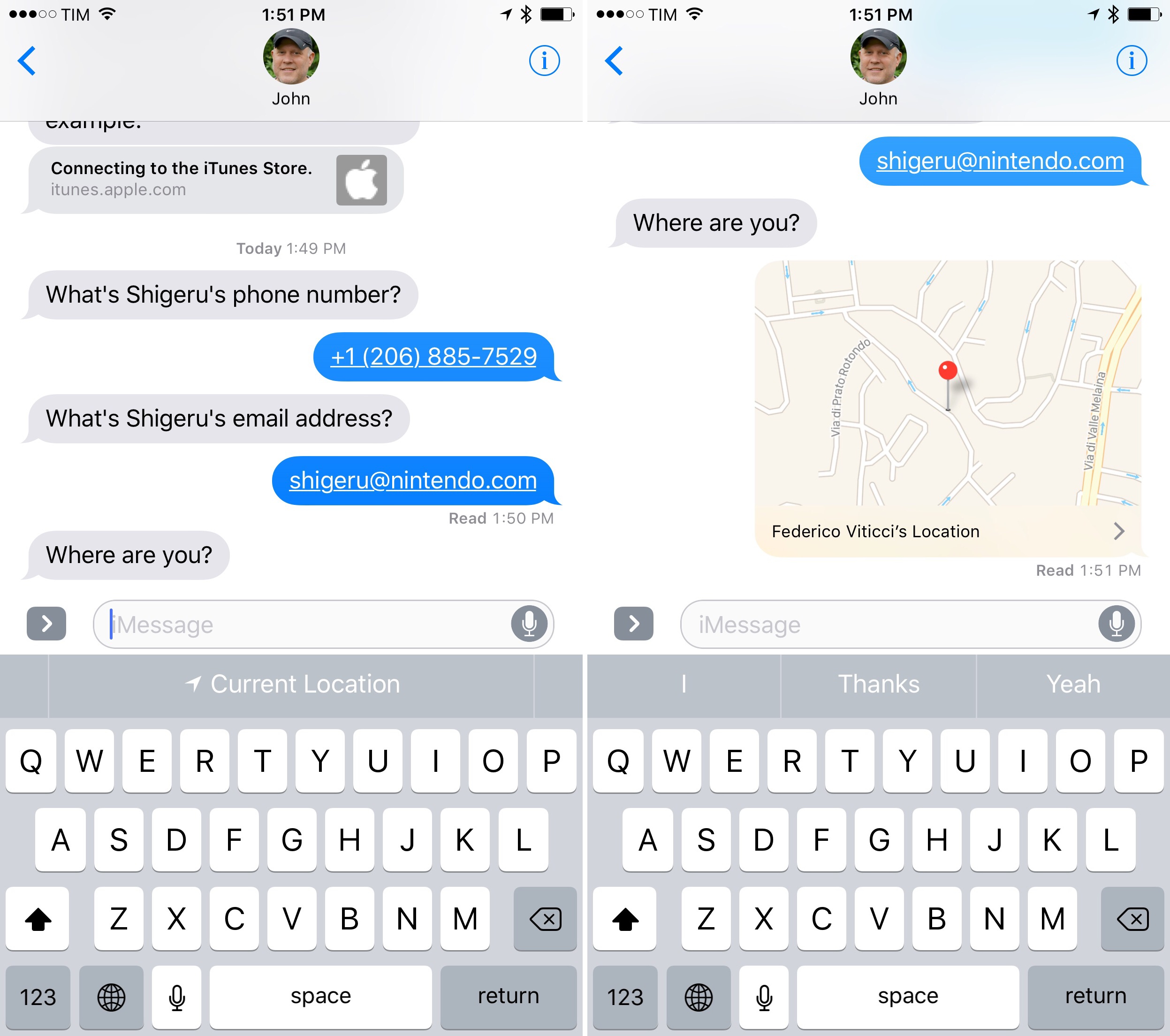 Sharing your current location from QuickType in iMessage.

NSUserActivity plays a role in proactive suggestions, too. Apps can push out activities for places and have them appear as suggestions in other apps. 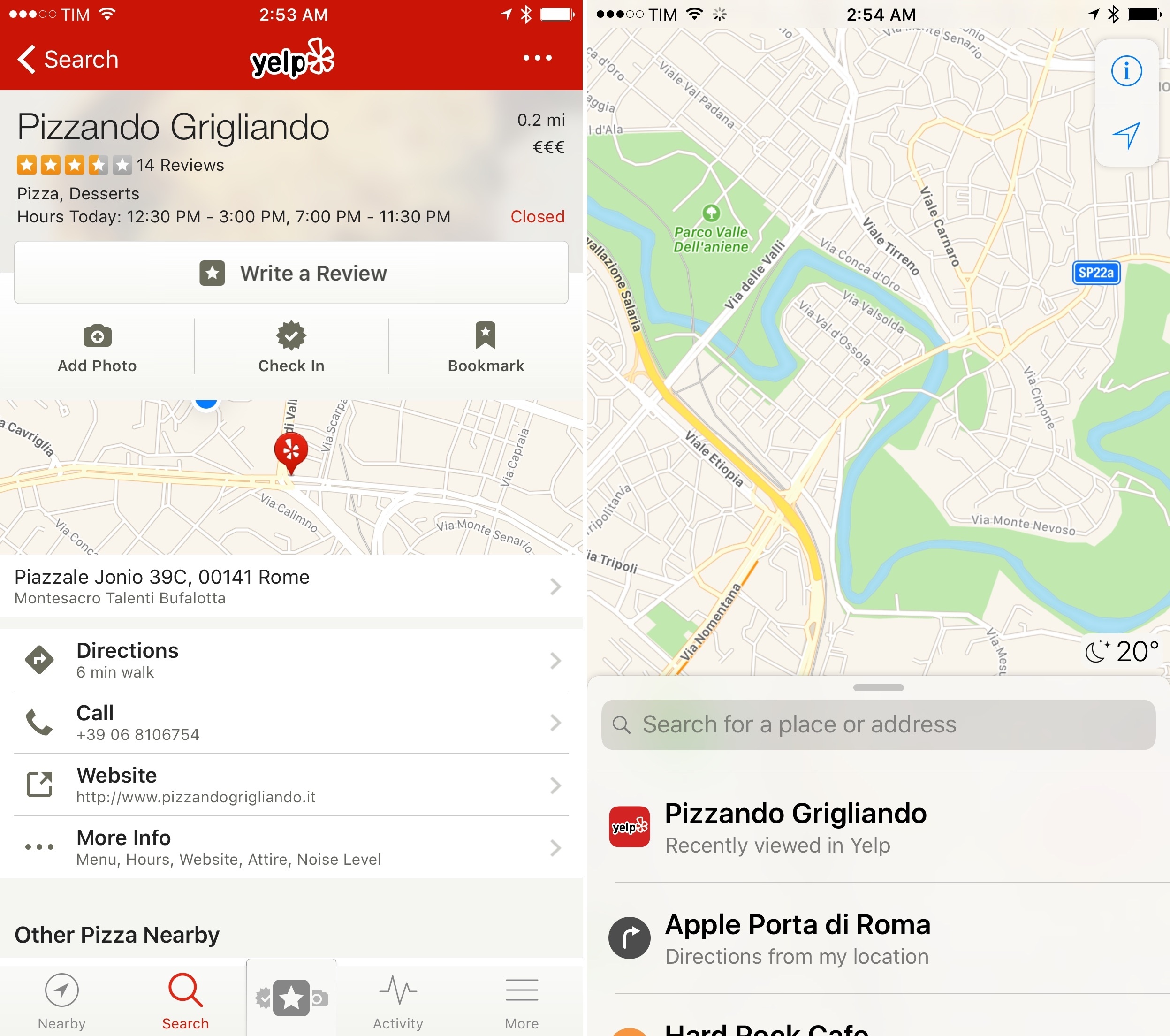 A Yelp suggestion in Maps.

A restaurant listing from Yelp, for example, can be suggested in Maps’ search view automatically; an app that displays hotel reviews can mark the location the user is viewing, and if the user switches to a travel planning app, that address can be proactively suggested without the need to search for it again.

Suggestions in Maps and Messages.

Suggestions in Safari and Maps.

Suggestions in Maps and Reminders.

Recently viewed places can even be suggested as shortcuts when switching between apps to open directions in Maps. 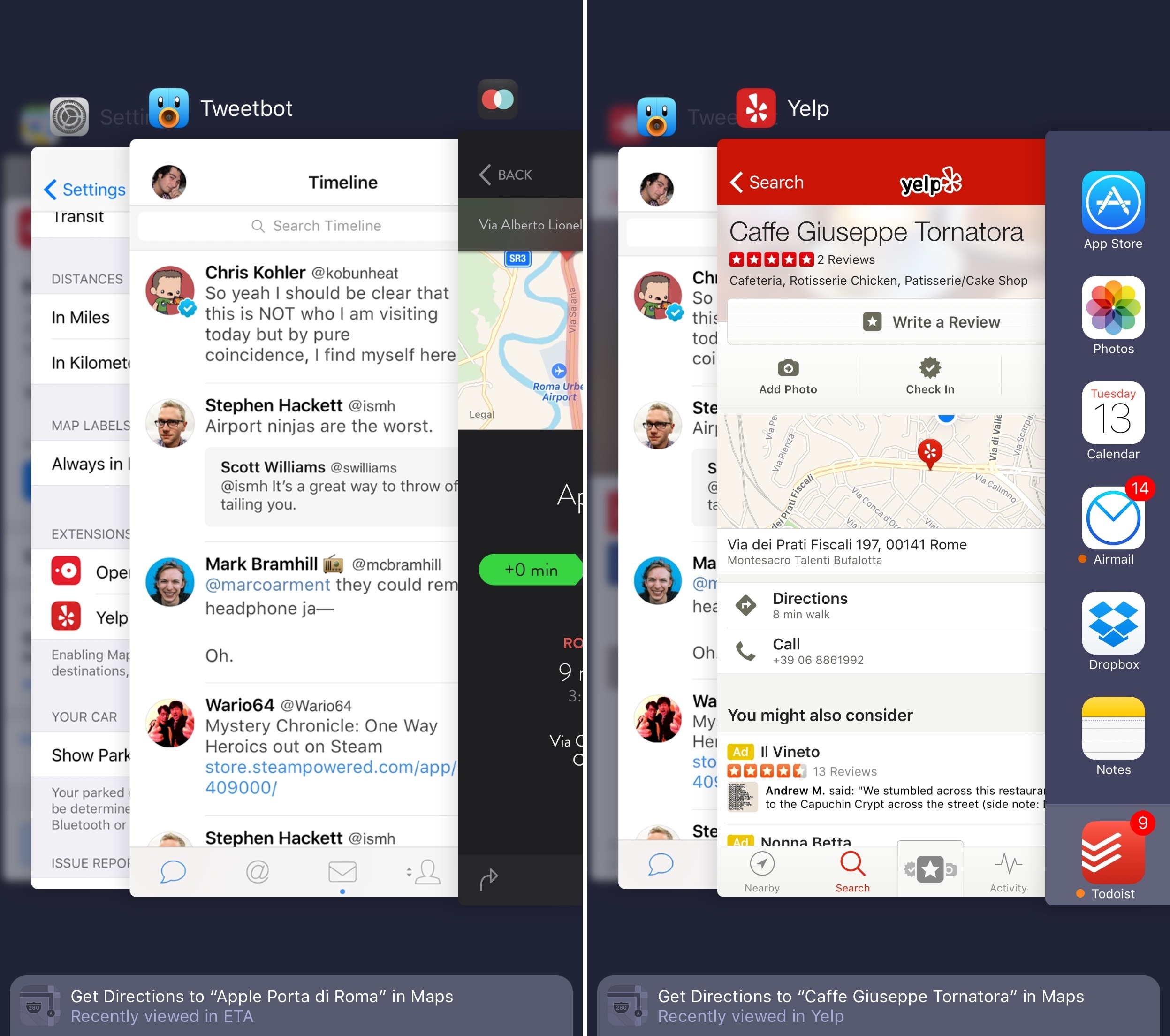 The system is an ingenious spin on NSUserActivity – a framework that developers were asked to start supporting last year for Spotlight search and Siri Reminders. By leveraging existing APIs and work developers have already put into their apps, iOS 10 can be smarter and use location-based activities as dynamic “bookmarks” in the system keyboard.

I’ve found other QuickType suggestions to be more inconsistent. When talking in English on iMessage, QuickType was pre-filled with suggestions for trigger sentences such as “Let’s meet at” or “We’re going to” because I was viewing a location in Maps or Yelp. I couldn’t get the same suggestions for different phrases like “Let’s have dinner at” or “See you in 10 minutes at”.

I couldn’t get proactive QuickType suggestions to work in Italian at all. This is an area where Apple’s deep learning tech should understand how users share addresses and contact information with each other. I’d expect Proactive to gain more predictive capabilities down the road, such as Calendar or Apple Music integration.

There are more instances of Proactive suggestions in iOS 10 that are subtle, but useful. When searching in Spotlight, QuickType will offer suggestions for locations and other content as soon as you start typing. Previous searches are listed at the bottom of Siri suggestions (and I haven’t found a way to disable them, which could be problematic). 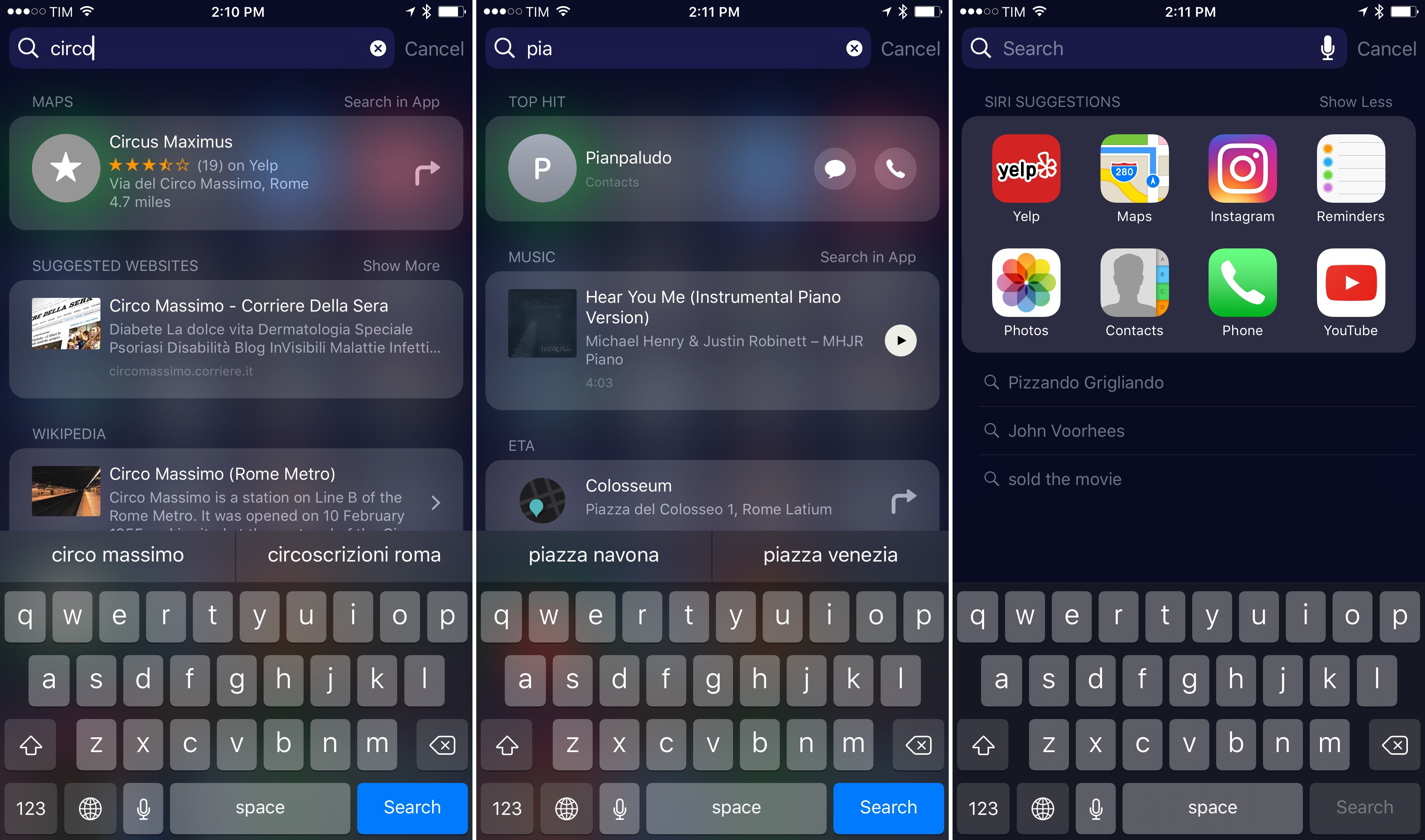 If you’re already looking at a location in Maps or apps that markup addresses correctly, you can invoke Siri and say “get me there” to open directions to the address you’re viewing. ETA uses this feature to start directions to a place you’re viewing in the app. 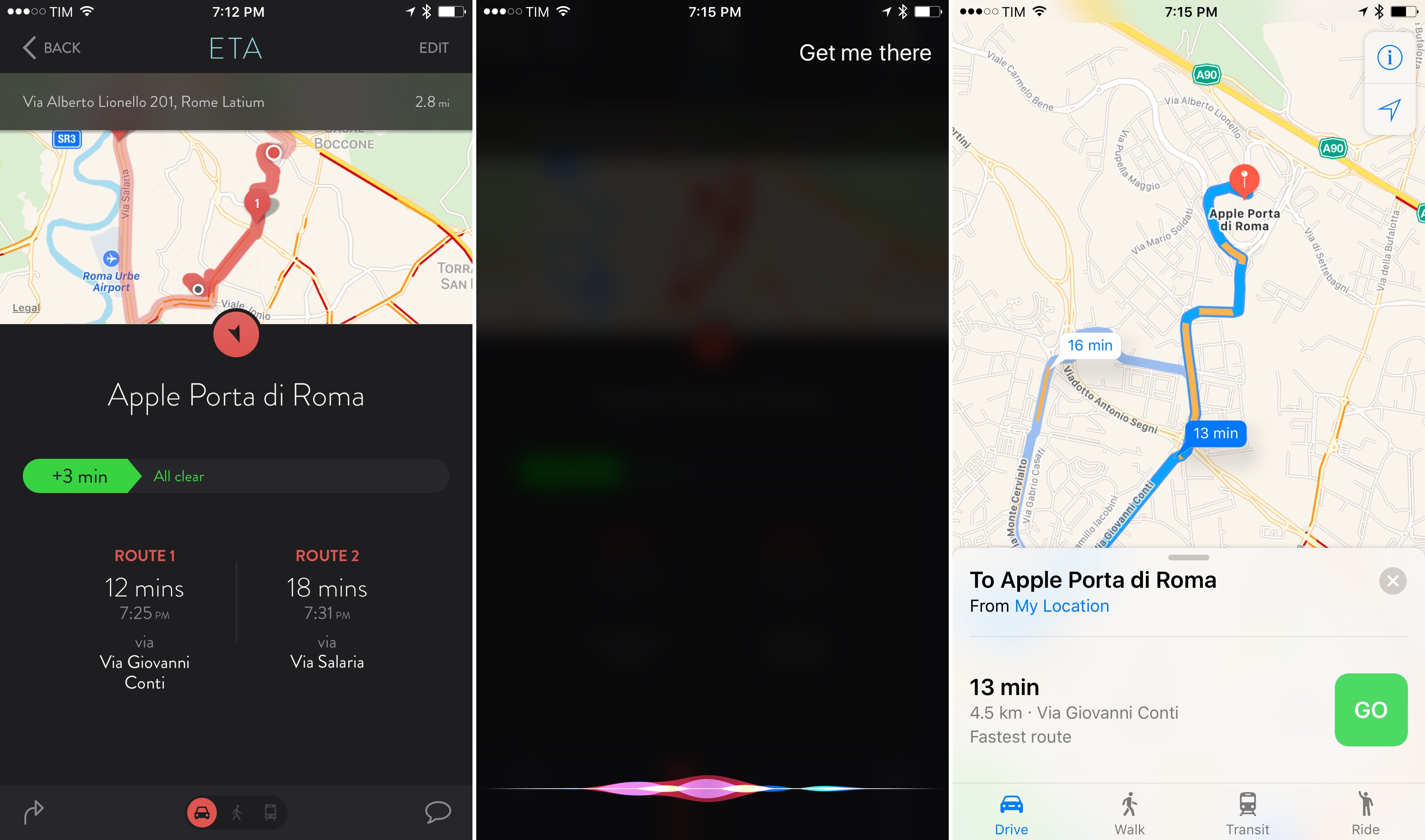 Opening directions from ETA with Siri.

It’s no Google Now on Tap, but it’s easy to see how Apple could soon replicate some of that functionality through various types of NSUserActivity.75

Apple is moving towards making Proactive more than a standalone page of shortcuts. Rather, Proactive is becoming an underlying feature of iOS, connecting an invisible web of activities when and where they make the most sense.