The Clock app has been updated with two new features aimed at people who use it at night: a dark theme (it looks nice) and Bedtime. 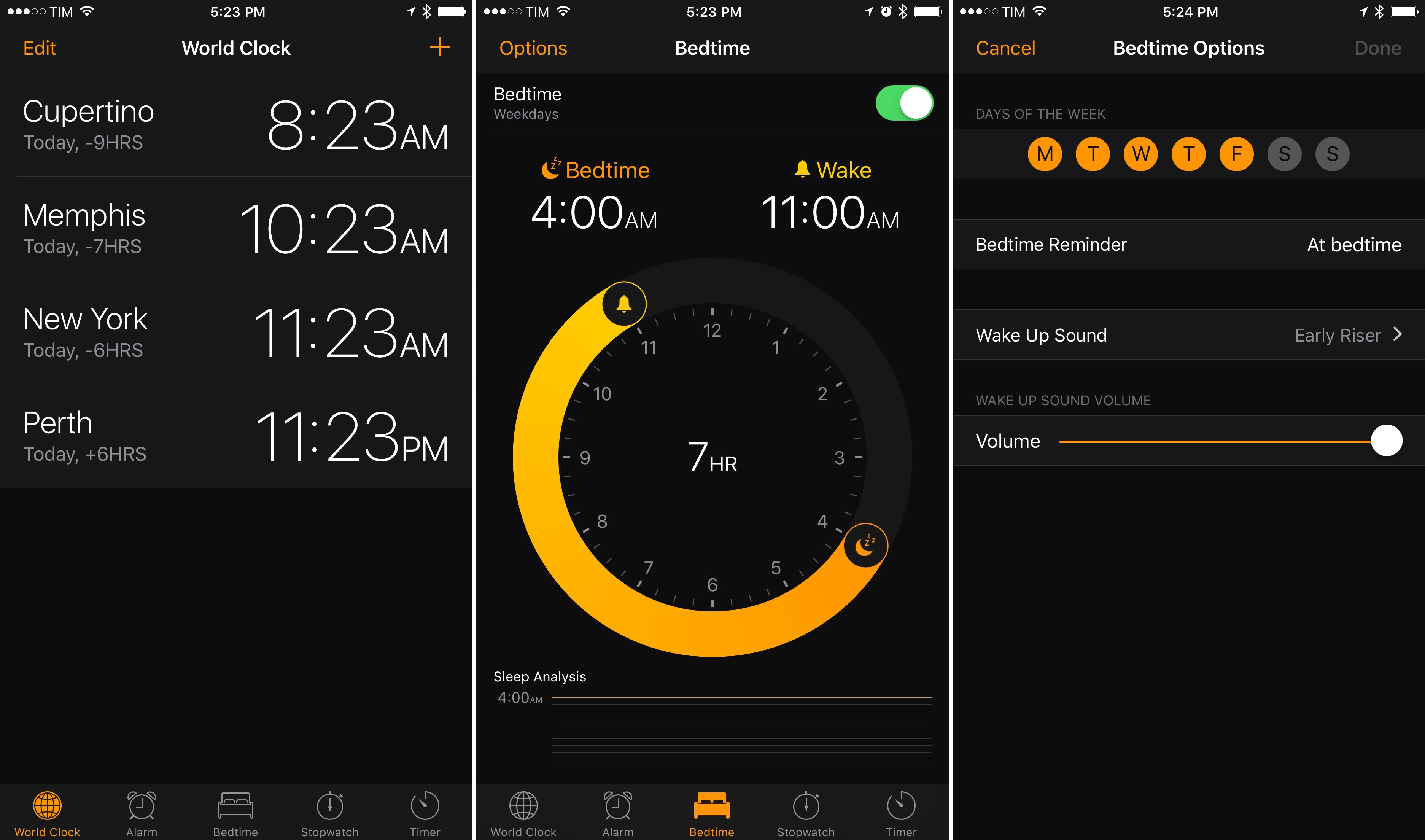 With Bedtime, Apple wants to give users with a morning routine an easy way to remember when it’s time to sleep. Like other sleep trackers on the App Store, Bedtime sends a notification a few minutes before bed, and it wakes you up with gentle melodies of growing intensity (you can choose from 9 of them, with optional vibration). The goal is to be consistent, always go to bed and wake up at the same time every day, and get a regular amount of sleep each night.

Bedtime has a good UI design with a dial you can spin to adjust when you’d like to sleep and wake up, and it’s integrated with HealthKit to save data under the Sleep Analysis category.

I can’t use Bedtime because, as someone who works from home, I never wake up at the same time every day and I don’t have kids to drive to school. Bedtime is too optimistic for my bad habits. I think it’s a nice enhancement, though, and I bet it’ll be quite popular among iOS users.

If all you ever wanted from the Activity app was a way to stay motivated by comparing your friends’ progress to yours, Apple has you covered in iOS 10.

Sharing is now built into Activity: once you’ve invited a friend to share data with you, the Sharing tab will display activity circles, total completion, and burned calories. You can tap through to see more details, hide your activity, and mute notifications; at any point, you can start an iMessage conversation with a friend – presumably to taunt or motivate them. 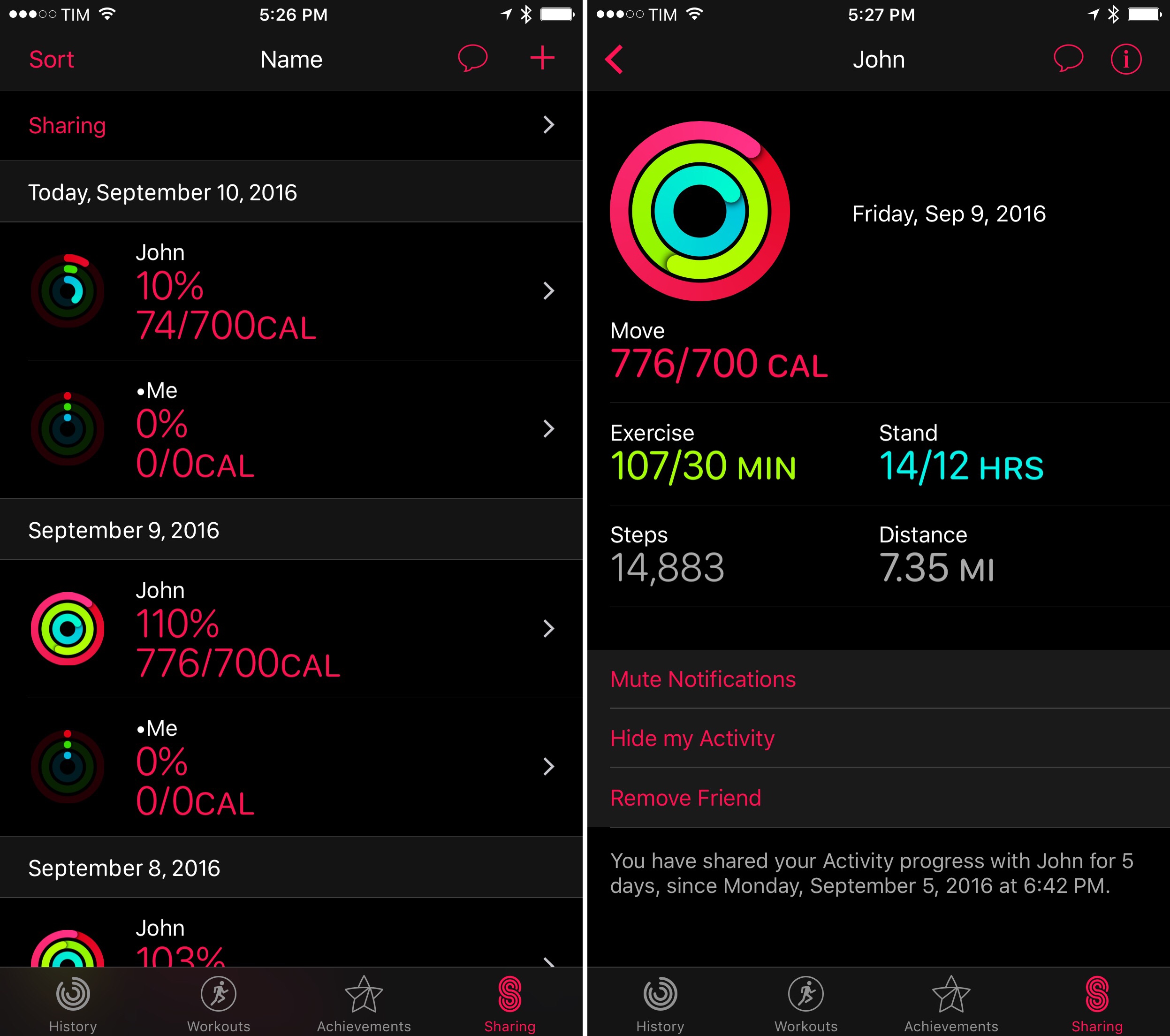 In my defense, I haven’t been wearing my Apple Watch for the past few weeks.

The “gamification” of Activity, combined with the Apple Watch, should help users push towards a daily goal and stay active. It’s a feature I plan to test more in depth once I get back into my exercise regimen.59 We’ll cover more workout and Activity changes in our review of watchOS 3.

As for Health, Apple has overhauled the app’s dashboard with four main sections represented by colorful artwork: Activity, Mindfulness, Nutrition, and Sleep. Each of these primary categories has an explanation video, and there’s also a general overview video about the Health app that you can watch by tapping a button at the bottom of the Health Data screen. 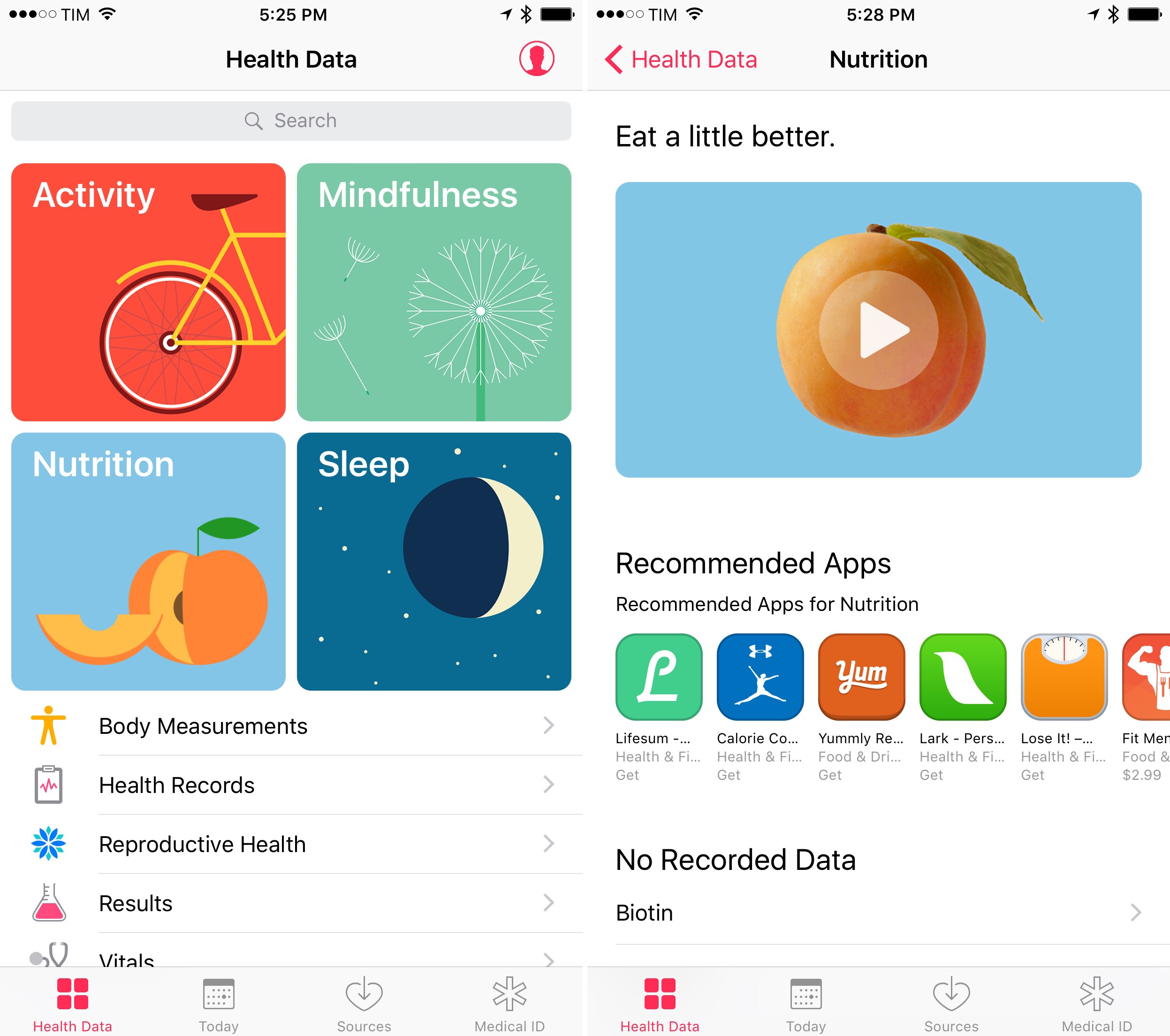 In an effort to make browsing Health less intimidating, Apple has simplified how you can view statistics recorded by your iPhone and Apple Watch. There’s a new Today page with a scrollable calendar ticker; you can tap any day to see all recorded data points as small previews (which support 3D Touch). Tapping one will take you to the category’s detail page, unchanged from iOS 9. 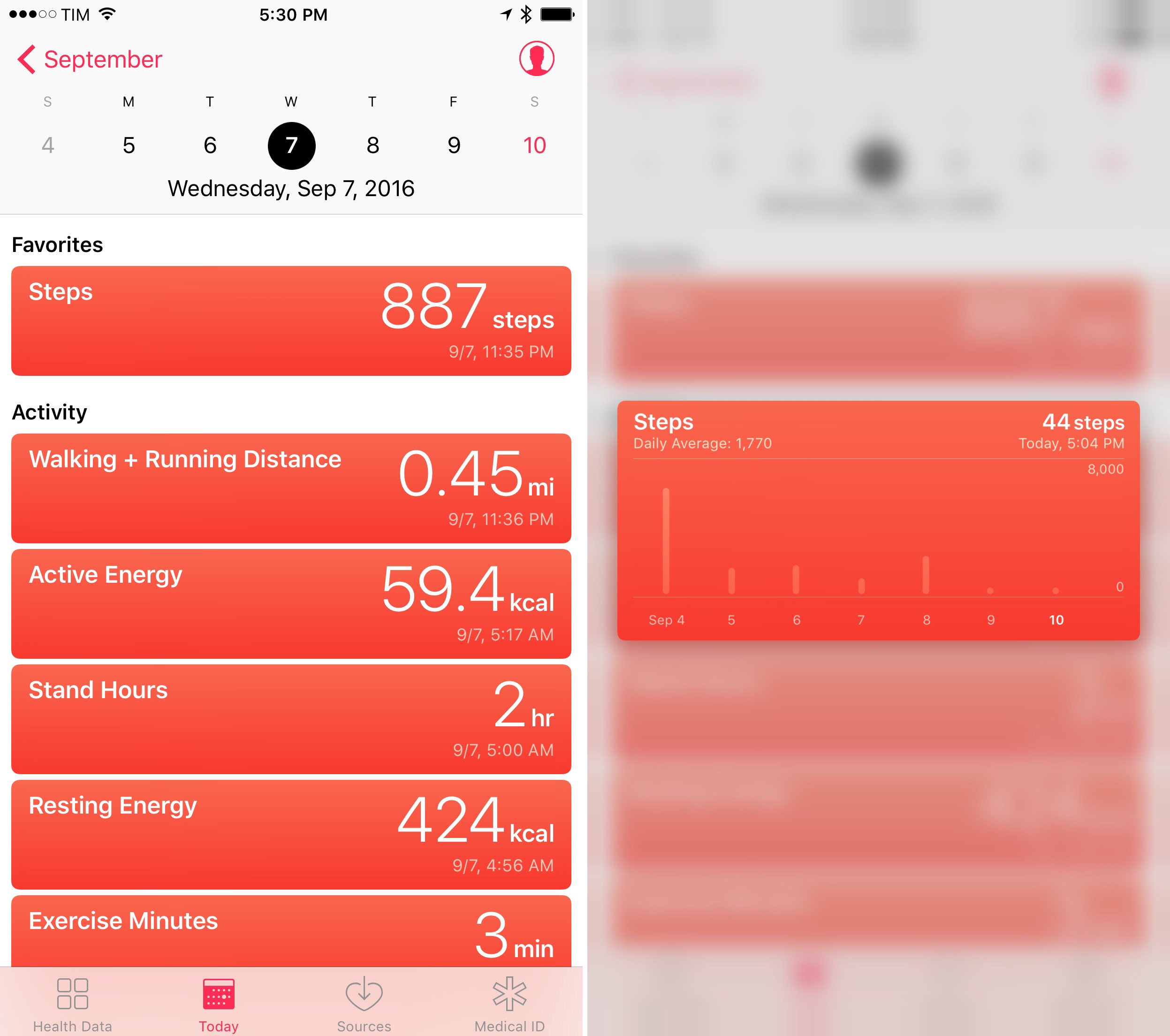 In the top right corner of the Health Data and Today pages, you’ll find a user icon to quickly access details such as date of birth, sex, and blood type. You can configure wheelchair use here, as well as export your recorded Health data as a .zip archive containing an XML backup. U.S. residents will be able to sign up to become organ donors with Donate Life (previously announced by Apple) in the Medical ID screen.

As I’ve been arguing for the past couple of years, the Health app will eventually have to find correlations between categories to help users understand how they’re living and what they should improve. Going beyond data collection and graphs should be the ultimate goal to turn Health into an assistant rather than a dashboard of data points. Until that’s the case, making the app prettier and easier to use is a good call.

Apple is adding another feature as part of the Continuity initiative launched two years ago: clipboard transfer between devices.

The option, dubbed Universal Clipboard, is designed to have (almost) no interface and “just work” in the background. After you’ve copied something on one device, pasting on another nearby will fetch what you originally copied on the first device and paste it. Universal Clipboard works with text, URLs, images, and other data types that can be pasted on iOS.

Like other Continuity functionalities, Universal Clipboard uses Apple IDs and peer-to-peer connectivity (Wi-Fi and Bluetooth) to determine devices in your proximity. Universal Clipboard is only engaged when you paste on a second device – it’s not constantly pushing your copied items to iCloud or broadcasting them to all devices nearby. Because Universal Clipboard is meant to quickly switch from one device to another, there’s a two-minute timeout on copied items – you won’t be able to paste an image you copied two days ago on your iPhone in a message thread on the iPad today.

In my tests, Universal Clipboard worked well. It takes about a second to paste text copied from another device. Pasting a photo was the only case where I came across a “Pasting from…” dialog that loaded for a couple of seconds. 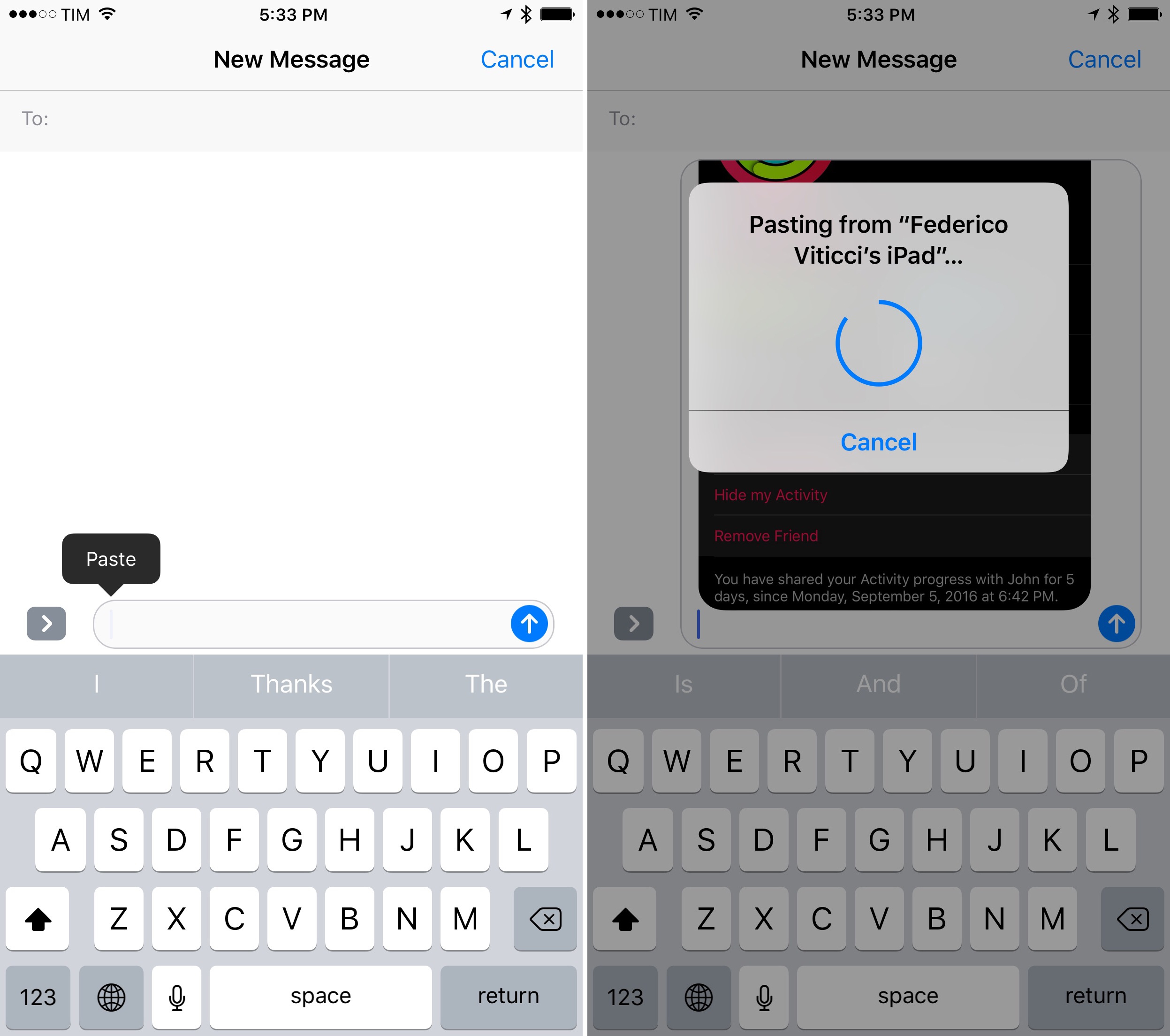 Pasting an image with Universal Clipboard.

Universal Clipboard’s no-configuration approach may concern developers who don’t want data copied from their apps to propagate across devices . To ease those qualms, iOS 10 includes an API to restrict the pasteboard to the local device or set an expiration timestamp. I suppose AgileBits and makers of other content-sensitive apps will provide settings to control the behavior of Universal Clipboard and disable it permanently. 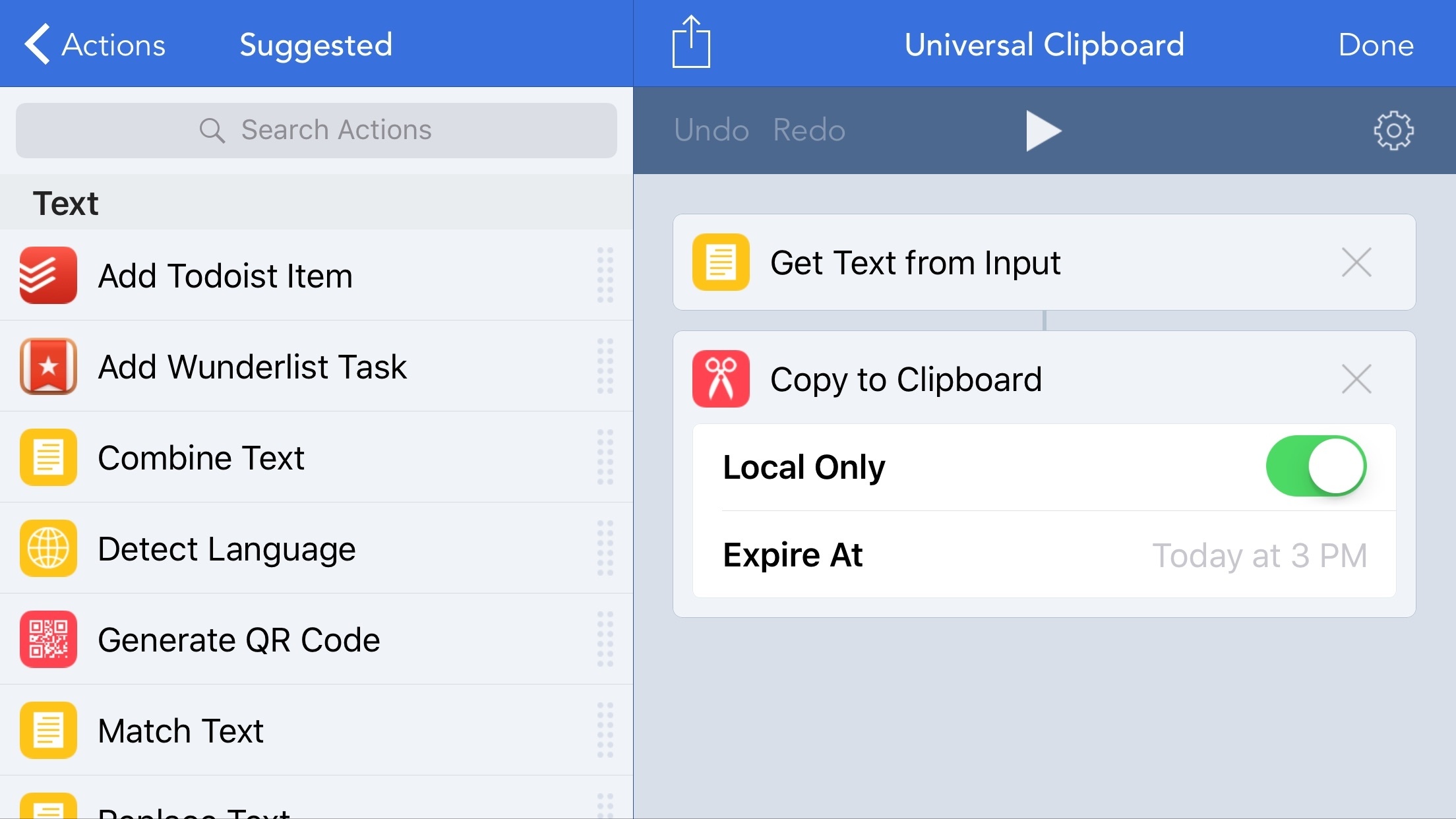 It’s not a replacement for dedicated clipboard managers such as Copied and Clips, but Universal Clipboard is ideal if you don’t want to think about transferring clipboard contents between devices. When you need it, Universal Clipboard lets you paste a link copied on the iPad into a WhatsApp message on the iPhone, or a photo from the iPhone into Notes on a second device. There are no clipboard entries to organize and no persistent storage of information to worry about. Like opening apps through Handoff, it’s a nice option to always have with you.

Calendar’s new features in iOS 10 are aimed at speed and location.

Data detectors for dates and times in iMessage conversations have been improved so they can pre-fill the event creation screen with details fetched from messages. If you’re planning a dinner with friends over iMessage and mention a place and time in the conversation, tapping the data detector should bring up the event creation UI with “dinner” as title and location/time properly assigned. When it works, it’s a neat trick to save time in creating events.

When creating an event in the Calendar app, iOS 10 suggests similar events so you can re-add them with one tap. 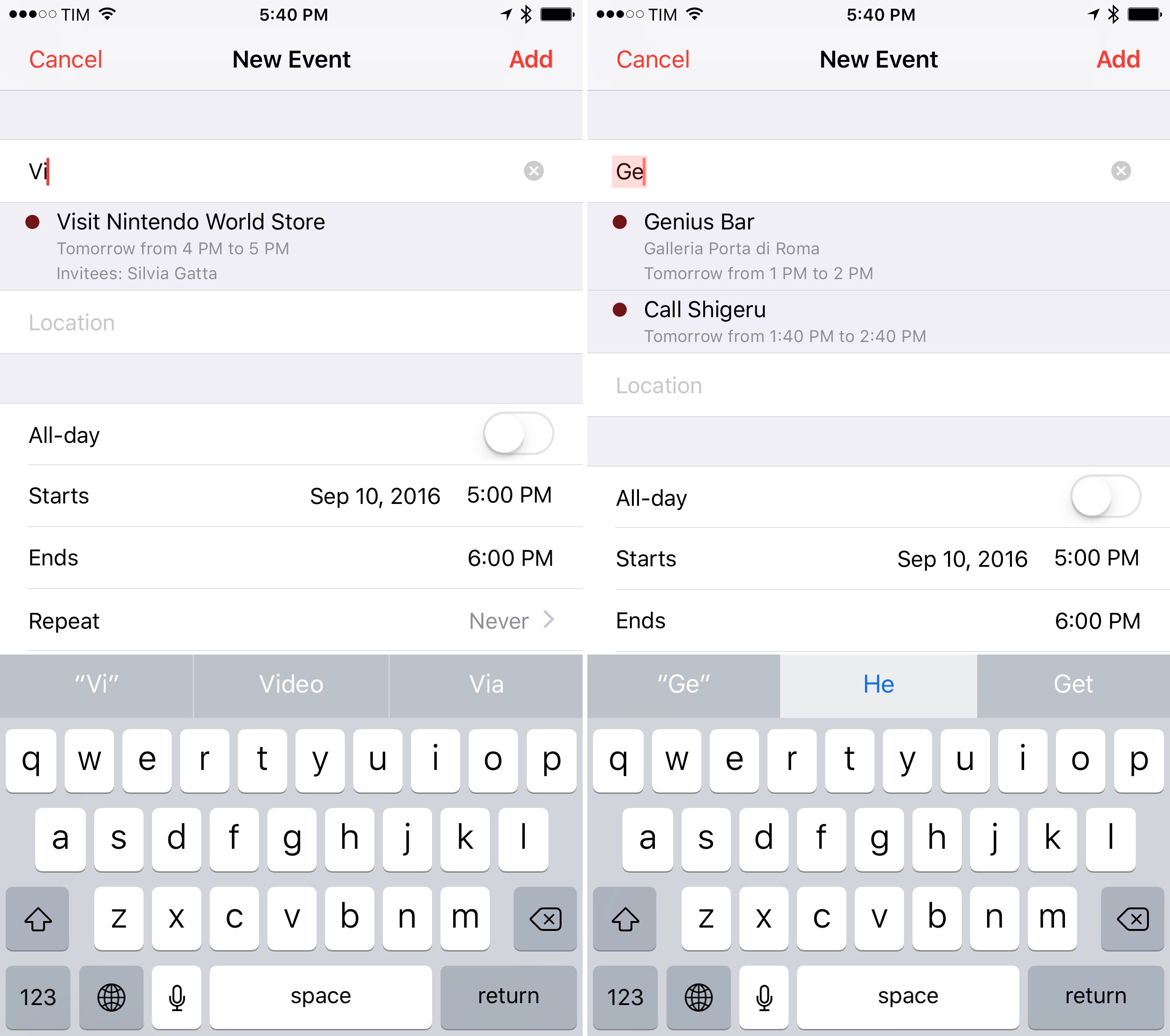 It’s not clear how far back into your history iOS 10 goes looking for old events. Event suggestions are handy – they’re not real event templates, but they pre-fill locations and times, too.

Speaking of locations, iOS 10’s Calendar can suggest a location to add to an event with one tap. If I had to guess, I’d say that iOS uses old events with the same name and frequent locations to suggest an address. And, if you create an event with travel time, Calendar will use the location of a previous event (not your current location) to calculate how long it’ll take you to get there.

Apple’s Calendar app isn’t as versatile or powerful as Fantastical or Week Calendar. But I’m not a heavy calendar user, and iOS 10’s proactive Calendar features have been smart in small and useful increments. I’m going to stick with Apple’s Calendar app for a while.

iOS users have long clamored for the removal of pre-installed Apple apps from their devices. Such desire is understandable: Apple has kept adding built-in apps every other year, which hasn’t helped the perception that Apple itself is wasting users’ storage while also selling 16 GB iPhones as base models.60

iOS 10 adds the ability to remove the majority of pre-installed Apple apps61 from the Home screen. These are:

There’s a catch. By removing an Apple app, you won’t delete it from the system entirely – you’ll remove the icon and delete user data inside the app, but the core bits of each app – the actual binary – will still live in the operating system. According to Apple, removing every app listed above will only recover 150 MB from your device. If you were hoping to get rid of every Apple app and suddenly gain a couple of GBs of storage, you’ll be disappointed.

Deleting a pre-installed Apple app works just like any other app on iOS: tap & hold on the icon, hit Delete, and you’re done. For each app, iOS will warn you that you’ll either lose your data or access to specific features, such as location sharing with Find My Friends, the Calculator icon in Control Center, or email data stored locally.62 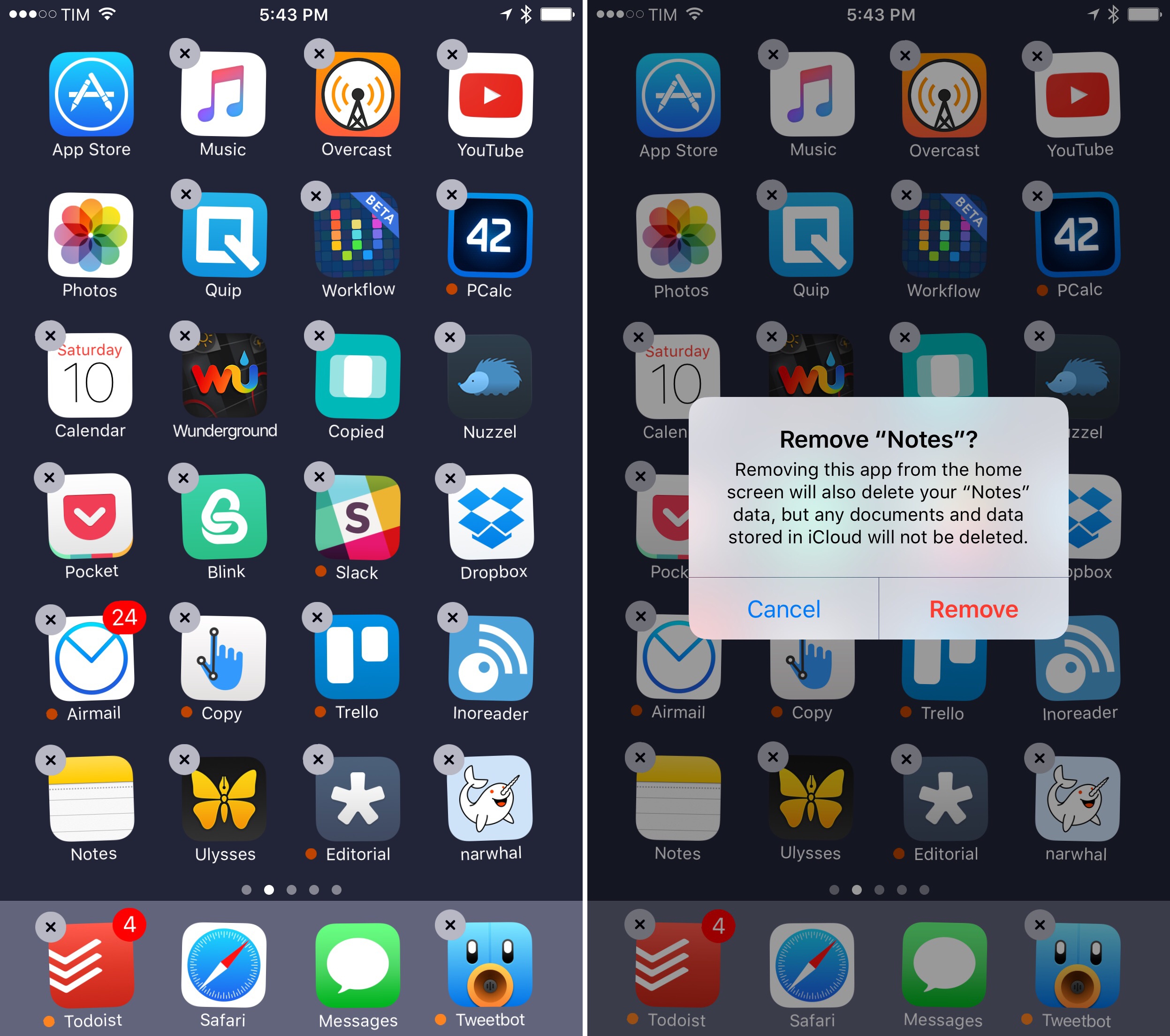 Removing apps based on core system frameworks won’t delete data inside them. If you remove Contacts, your contacts won’t be deleted; the same applies to Reminders and Calendar, plus other iCloud data and documents. Effectively, you’re removing the shell of an app and its settings; deleting Mail, for instance, removes all your accounts from the app. If you remove Reminders and ask Siri to create a reminder, though, it’ll still be created and made available to third-party clients via EventKit.

Restoring previously removed Apple apps could have been more intuitive. You have to open the App Store and search for the name of an app, or look for Apple’s developer profile page and tap the download button for each app you want to bring back. It would have been nice to have a dedicated area in Settings to view which apps have been removed with an easier way to restore them. 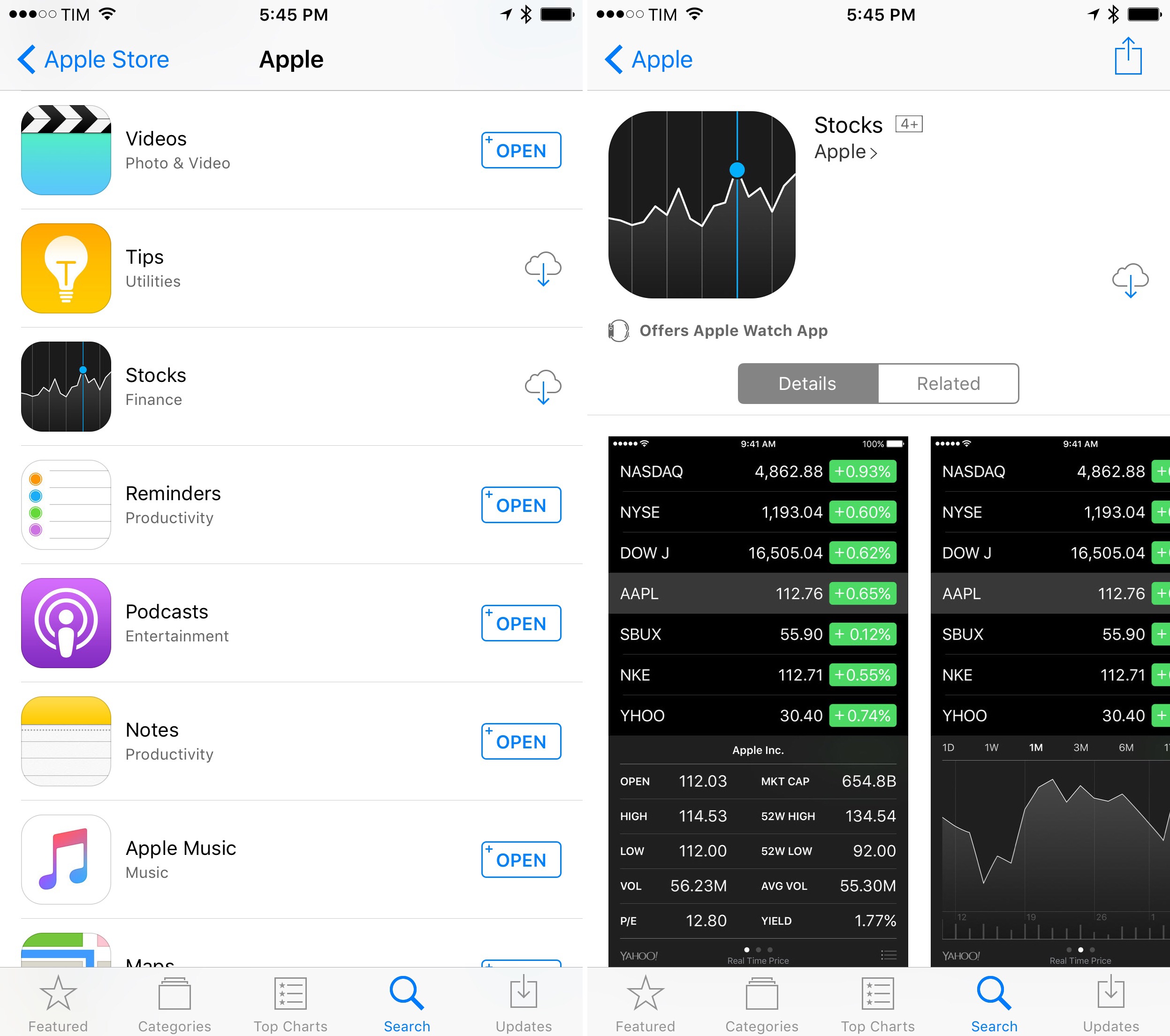 Restoring Apple apps is further confirmation of the fact that those apps aren’t actually gone – they’re just hidden. The download isn’t a download: it takes less than a second and it doesn’t even show a progress bar. Try this for yourself: remove an Apple app, find Apple’s developer page on the App Store, put your device in Airplane Mode, and hit download. The app will reappear on your Home screen without the need for an Internet connection.63 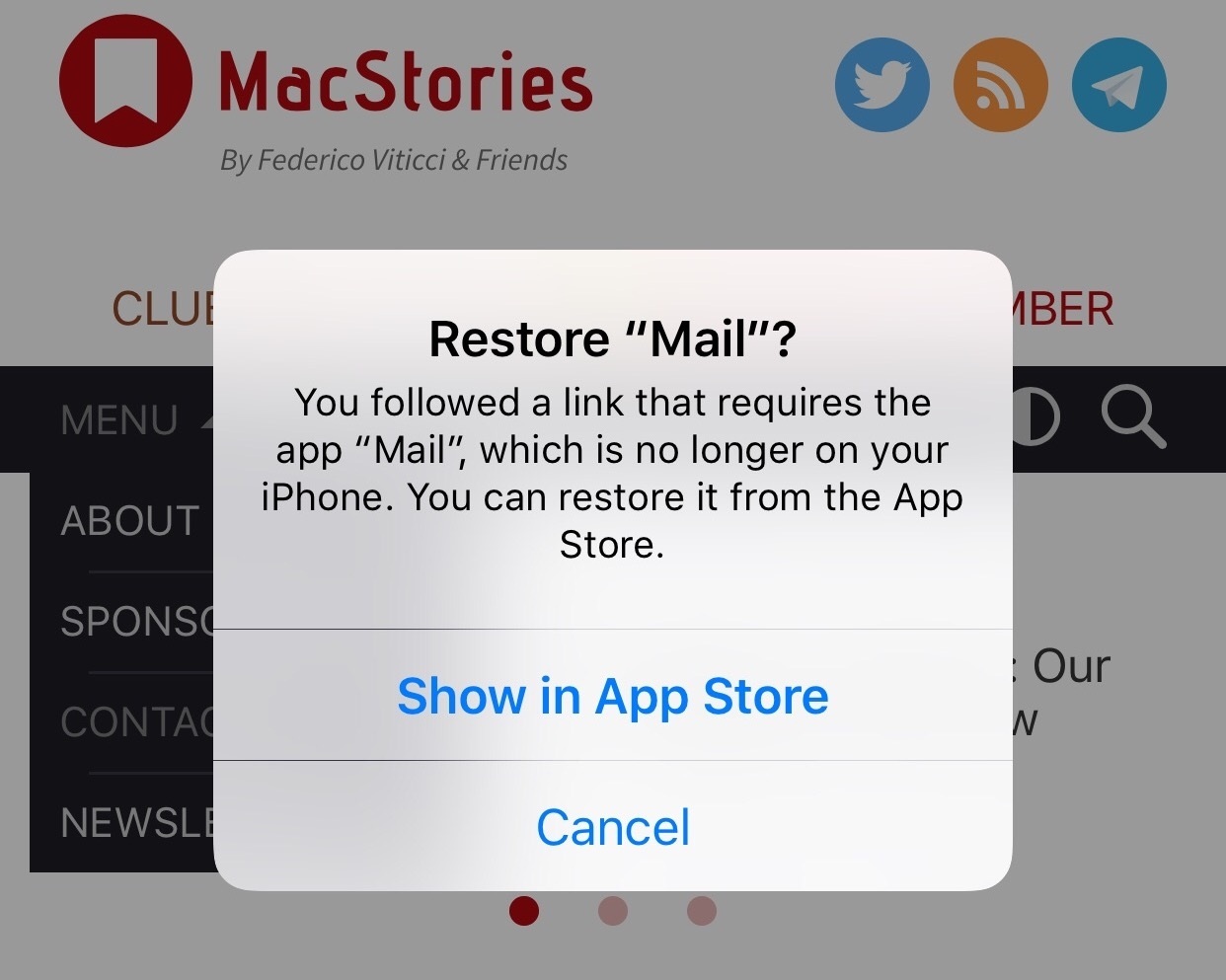 With the current system, a removed Apple app can’t be replaced as the default choice with a third-party alternative. If you tap a mailto: link in Safari, iOS won’t ask if you want to use a different email client; it’ll tell you to open the App Store and re-download Mail (same with links to shared notes and other apps). Is Apple preparing for a future of customizable default apps?

As a company that prides itself on the tight integration of its hardware and software, caving to user pressure on the matter of pre-installed apps must have been, politically and technically, tough for Apple. The result is a compromise: Apple is letting users get rid of those Tips and Stocks apps (among others) that few seem to like, but they also can’t completely delete apps because of their ties with the OS.

Some people will complain about this decision. I’m not sure users would like the opposite scenario where entire frameworks are deleted from iOS (if even possible without breaking Apple’s code sign), third-party apps lose access to essential APIs, and each download consumes several hundred MBs. Given the architectural complexities involved, the current solution seems the most elegant trade-off.