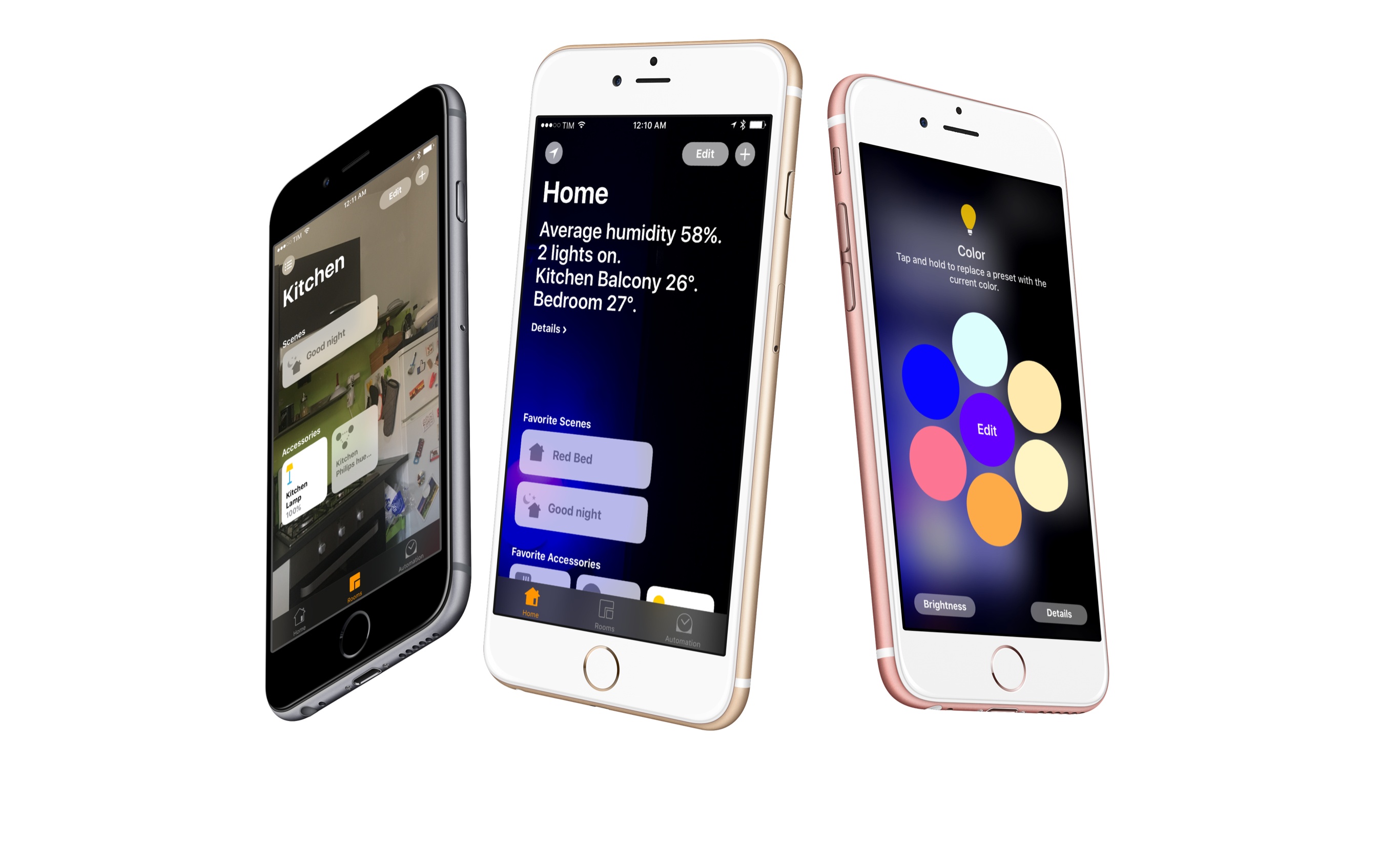 Apple’s home automation framework, HomeKit, is ready for prime time in iOS 10. In addition to a dedicated page of shortcuts in Control Center, HomeKit is getting a native app for accessory management. It’s also expanding to new types of accessories, including cameras.

Like iCloud Drive graduated to an app after a framework-only debut, all your HomeKit accessories can be accessed from a Home app in iOS 10. You won’t find the complexity of advanced tools such as Matthias Hochgatterer’s unfortunately-named Home in Apple’s take. Instead, Apple’s Home app will greet you with the same bold look of Apple Music and News. 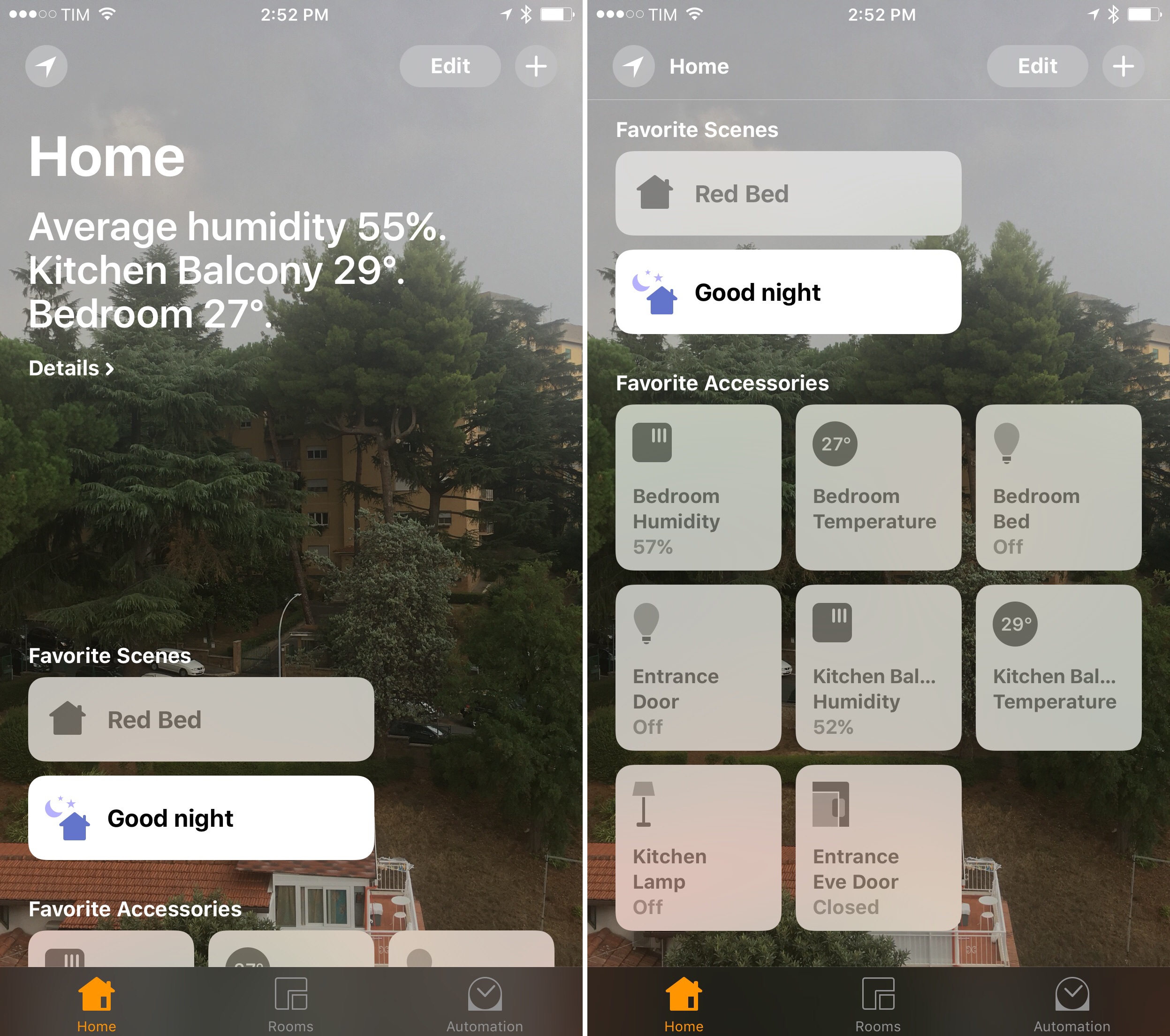 Home works with any HomeKit accessories previously set up on iOS 9. One of the biggest flaws of the old HomeKit implementation – the inability to set up new accessories without an app from the vendor – has been fixed with iOS 10’s Home app, which offers a complete setup flow from start to finish.

Rooms are a section of the app, while your favorite accessories and scenes are highlighted in the main Home dashboard. They’re the same shortcuts used in Control Center. 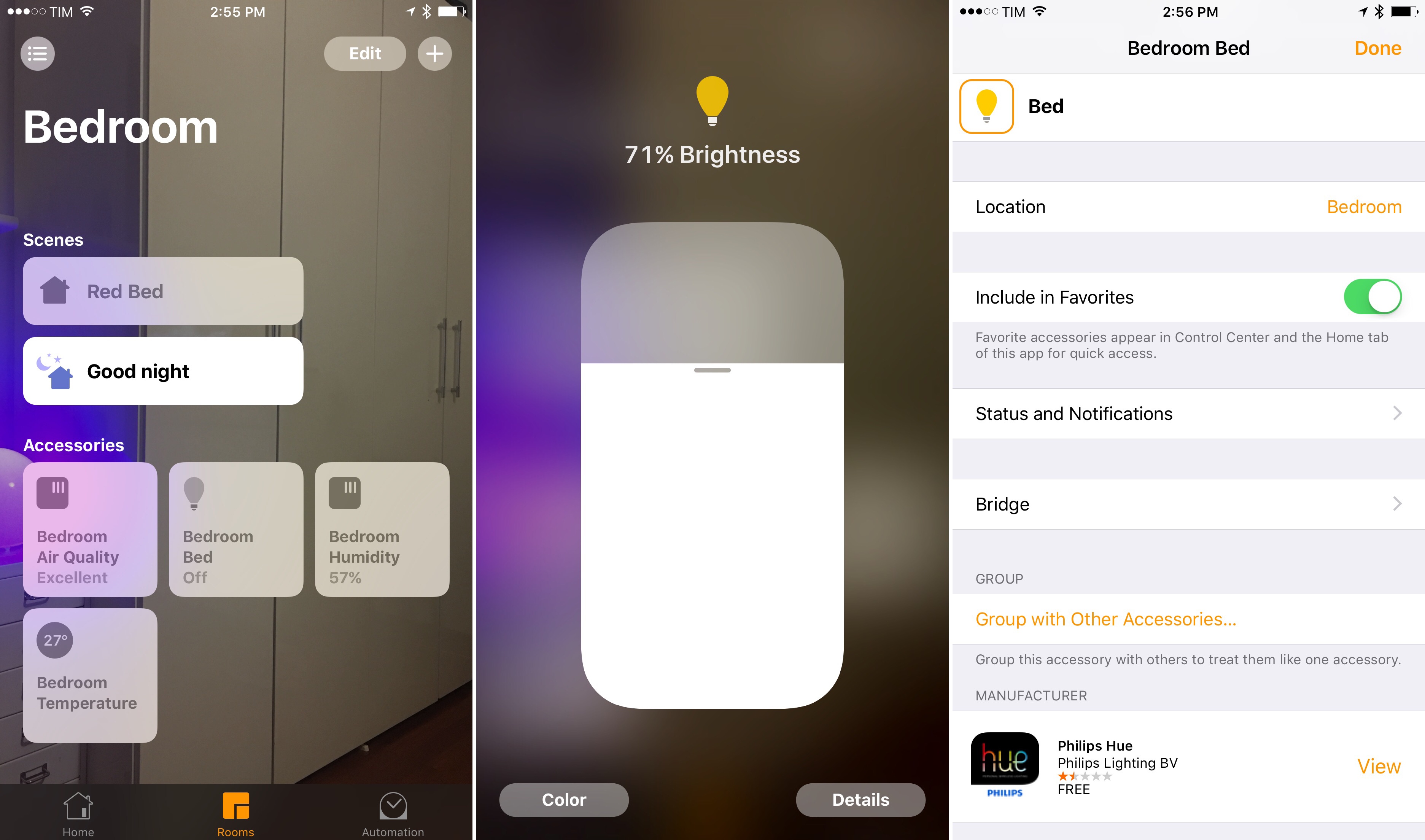 Long-tapping an accessory in a room to open its detail screen.

Apple offers a collection of suggested scenes to get started – such as “Good morning” or “I’m home” – but you’ll want to create your own scenes, choosing from custom icons50 and any accessory action you want.

Tap the ‘+’ button to create a new scene.

You can choose a custom icon.

Most users will only use Home for the initial accessory/scene configuration and to add favorites in Control Center, but there are hidden tricks in the app that are worth exploring (and, like Apple Music, concerning from a discoverability perspective).

You can find a summary of average conditions and statuses at the top of the Home page. You might see humidity, temperature, and door lock status in this message. You can tap Details for an accessory overview. 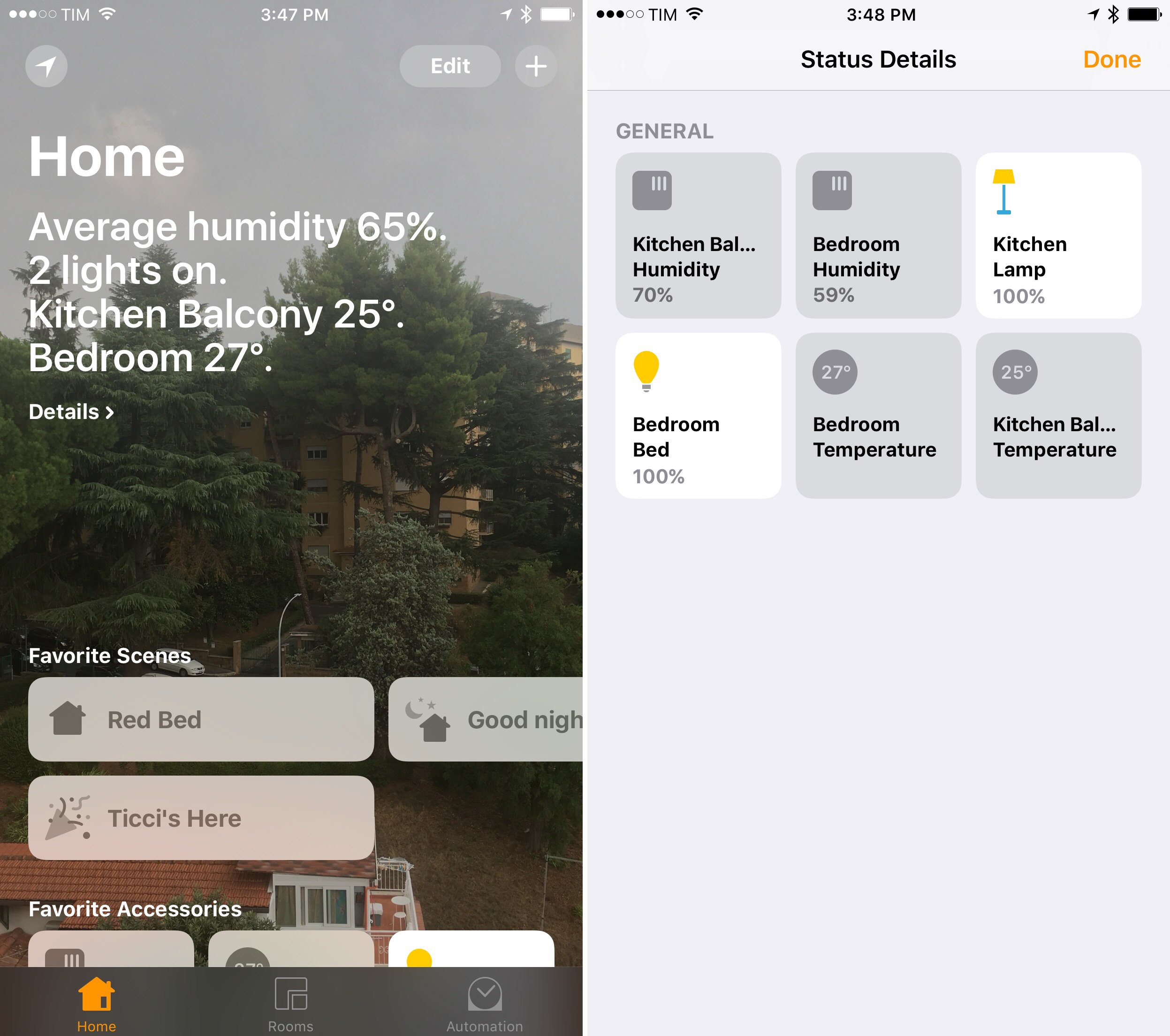 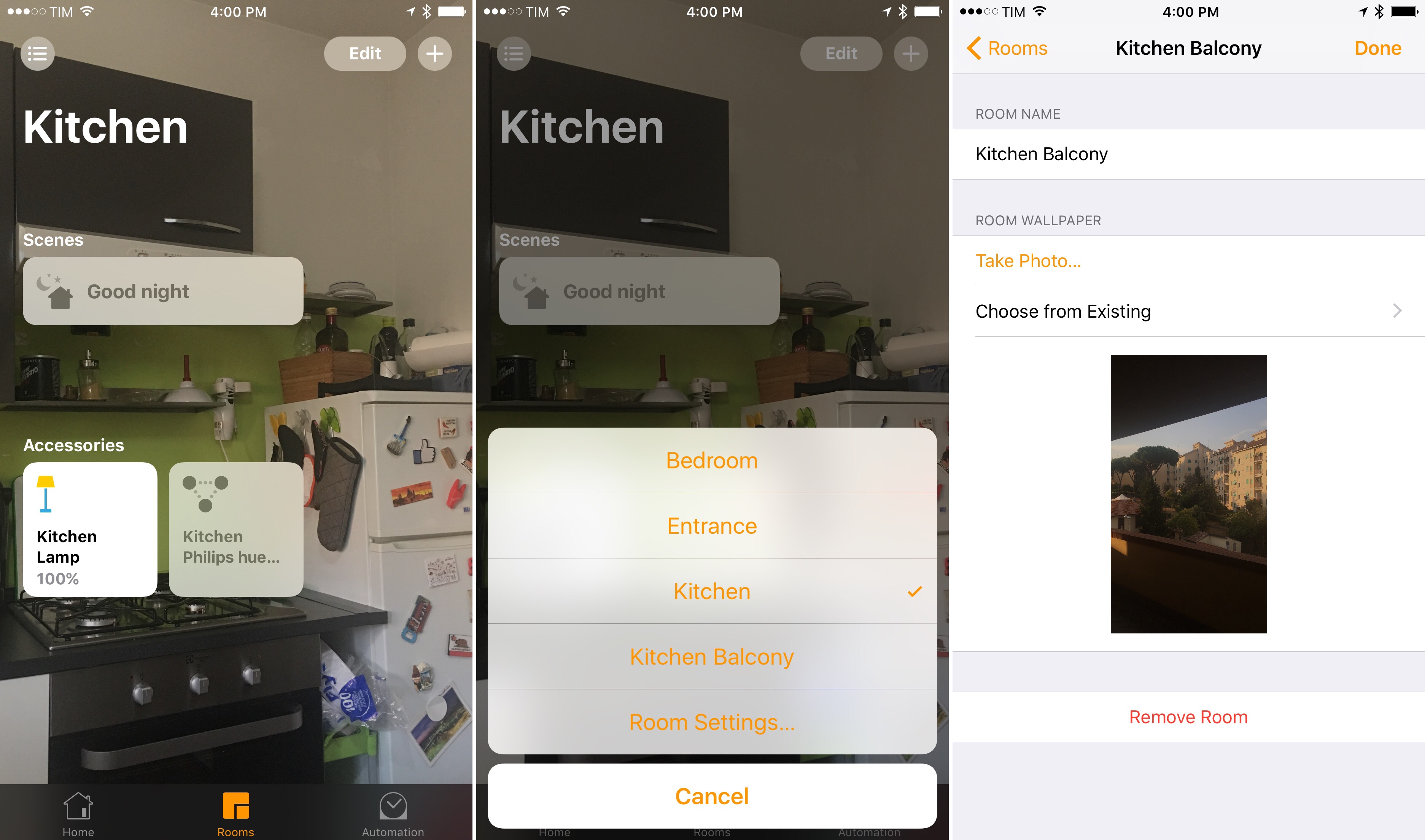 Custom wallpapers for multiple rooms are a nice touch: they make the Home app look like your home, but I wish they synced with iCloud.

Some of the app’s features are too hidden. To navigate between rooms, you can tap the menu at the top, but you can also swipe between rooms. There’s no visual cue to indicate that multiple rooms live on the same horizontal pane. The design language shared by Apple Music and Apple News means both apps have this feature discoverability issue in common.

Similarly, buttons can be pressed with 3D Touch or long-tapped to open a modal view with intensity levels and settings for colors and more.

There’s no way of knowing that more functionality lies beyond these “special taps”. And that’s too bad, because this view lets you manage useful options such as accessory grouping51 and bridge configuration.52

A front-end HomeKit interface has allowed Apple to bring deeper management features to iOS. First up, sharing: if you want to add members to your home, you can invite other people and give them administrative access to accessories. You can allow editing on a per-user basis, and you can also choose to let them control accessories while inside the house or remotely. 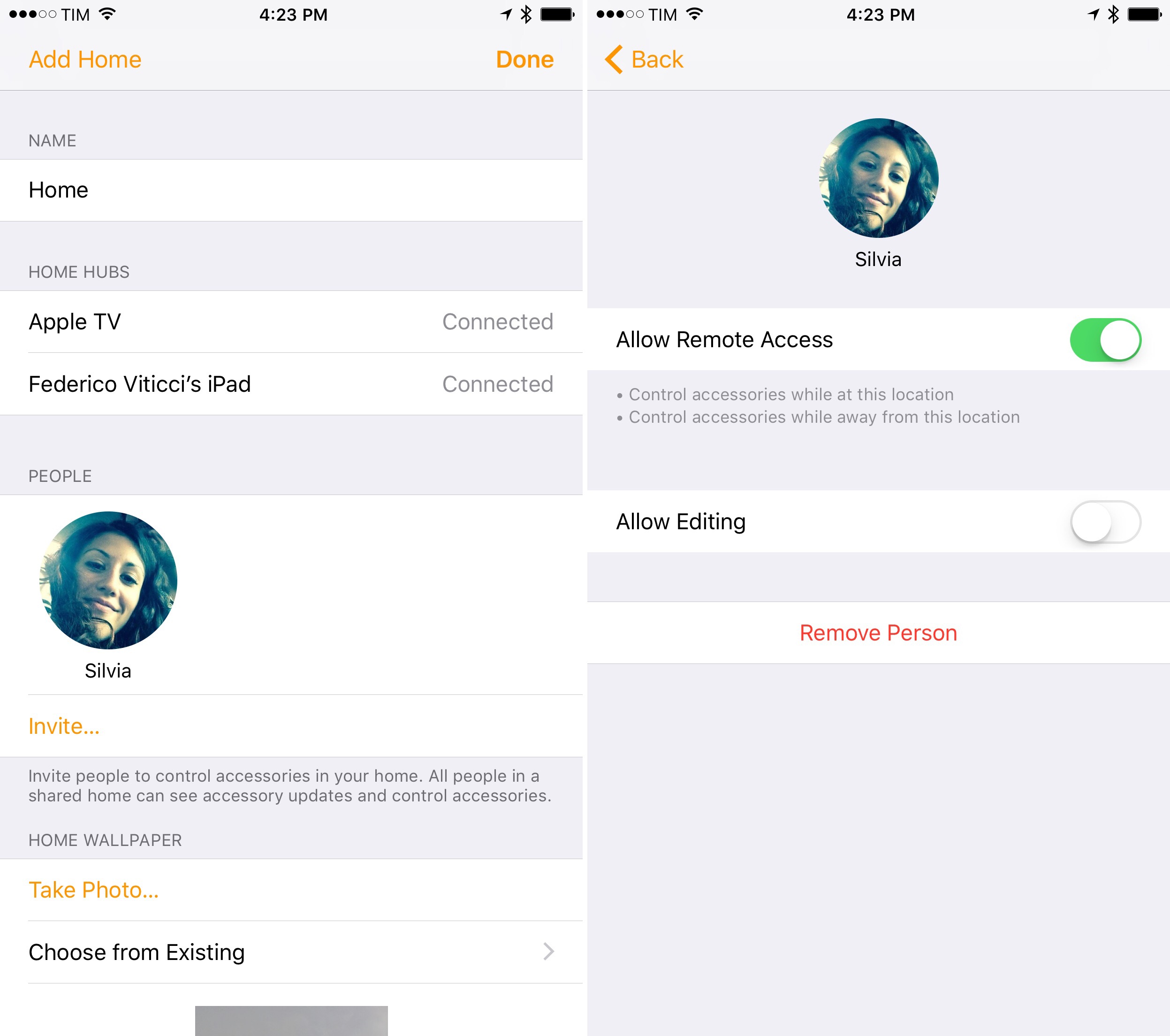 This ties into the Home app’s second advanced feature – home hubs. What used to be an opaque, poorly documented option in iOS 9 is now a setting screen: your Apple TV or iPad can be used as HomeKit hubs when you’re not at home. As long as the devices are plugged into power and connected to Wi-Fi, you can use them as bridges between a remote device and your accessories at home without additional configuration required.

Remote control comes in handy when you consider HomeKit’s deep integration with iOS in Siri and Control Center. In my tests, I was able to turn on my espresso machine remotely when I was driving home just by talking to Siri. Control Center’s Home page works with remote control: I can turn off my lights with one swipe, or I can check the status of my door anywhere on iOS.53

There’s also automation. Third-party HomeKit management apps have long offered ways to set up rules and triggers to automate accessories and scenes based on specific conditions. iOS 10’s Home app brings a simpler interface to have accessories react to changes at home in four different ways:

When creating a new automation, you won’t be presented with an intimidating workflow UI. Apple has nicely separated the individual steps behind an automation: first you’ll choose the accessory or trigger that will start an automation, then you’ll be shown a handful of options. If you want to turn off your lights when the door closes, for instance, you first choose from Door: Open/Closed then move onto selecting scenes or lights.

There’s no complicated language to learn for automation. (Tap for full size)

I set up some automation rules in the Home app a couple of months ago, and they’ve been running smoothly since. Every day at 5 AM, lights in my bedroom and kitchen are turned off because I’ve likely gone to sleep by then. In another automation, my bedroom light turns red if the humidity level rises over 60%.

In the future, I’d like to see the ability to create nested automations with support for presence recognition. Currently, I can’t tell the Home app to send me a notification if the main door opens and I’m not at home, or to turn off the lights if it’s after sunset and nobody’s home.

Last, HomeKit is expanding to new types of accessories. With iOS 10, third-party manufacturers can create:

Cameras and doorbells were two highly requested enhancements to HomeKit. Third-party HomeKit cameras aren’t available on the market yet – which is unfortunate, as I couldn’t test them for this review – but I plan on buying one as soon as possible.

Apple’s plan for the connected home is coming together in iOS 10. Platform fragmentation has been a fundamental problem of third-party smart home devices and hubs: we’ve all heard the tales of devices being unable to talk to each other, being discontinued after a couple of years, or having to support external APIs to bring some communication into the mix.

Home automation is best experienced as a tightly integrated extension of our smartphones.

With HomeKit, Apple’s closed and slower approach is paying off in consistency, durability, and integration with the OS. The Elgato sensors I bought nearly two years ago have worked perfectly with iOS 10 since the first beta. I don’t have to worry about companies supporting IFTTT, Wink, or other protocols as long as they work with HomeKit.

In Apple’s ecosystem, I can always extend my setup. When you consider extra functionalities such as rich notifications, Siri, remote hubs, and Control Center, it’s clear that home automation is best experienced as a tightly integrated extension of our smartphones.

I want to believe that the rollout of HomeKit accessories will continue at a steady pace with a Home app front and center in iOS 10. Even if that’s going to be a problem for my wallet.