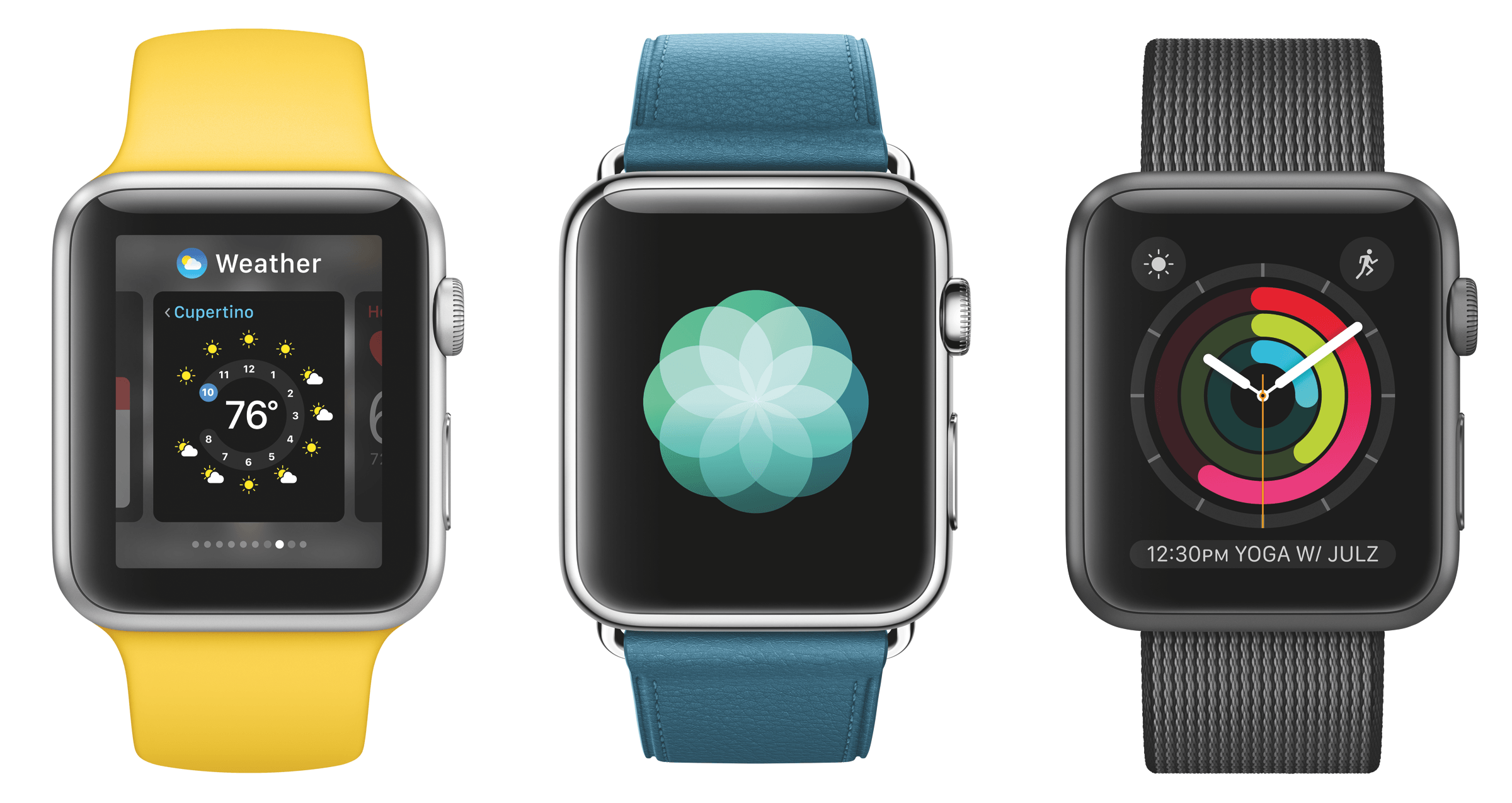 Apple this morning announced watchOS 3, the next version of the Apple Watch’s operating system, at their WWDC keynote event. A big focus of the release revolved around much needed speed improvements throughout the system, but the announcements also emphasized improvements in health and fitness, accessibility, and messaging. There was also a pretty large overhaul of some of the main functions of previous versions of watchOS, including a complete change in the features tied to the Watch’s Side Button.

Gone from the Apple Watch is the somewhat ill-conceived Friends interface. This circular wheel of friends’ faces was described last year as one of the Watch’s biggest features, so important as to be accessed by clicking one of the only two physical buttons on the device. At today’s event, Apple did not even mention the complete removal of this interface from the system, but simply noted that the Side Button is now the entryway to the Apple Watch’s “Dock”.

The Dock is a familiar metaphor to Apple users, a prominent user interface affordance on OS X (now macOS) and iOS. It’s the place where users store their most used apps in order to make them more easily accessible than the rest of the apps on their systems. This is the same role the Apple Watch’s Dock now plays: tap the Side Button to see your Watch face shrink back into a horizontal-sliding set of app snapshots, very similar to the interface for switching between different Watch Faces in watchOS 2. Although I haven’t put my hands on the beta yet to figure out exactly which apps show up in the dock and how they get there, Apple’s press release says it’s filled with users’ “recent and favorite apps”, so I would assume it is a combination between your most recently used apps and apps that either you choose, or that the Watch figures out you open most frequently (I’ll have a more detailed discussion of this and other functionalities in my watchOS 3 review in the Fall).

Assuming the apps located in the Dock are predictable, it sounds like the Dock will be a great new way to switch between apps on watchOS. As for the Friends interface, good riddance, you won’t be missed.

The Apple Watch’s Side Button has also picked up another new feature: tap and hold on the button to activate SOS. This new feature on the Watch is capable of calling emergency services no matter where you may be in the world. After holding down the Side Button, you will see the SOS interface show up on the screen, with a countdown timer prominently displayed in the middle. The countdown timer is to confirm that you don’t activate this feature by accident, because once the countdown expires the Apple Watch will immediately contact the emergency services and notify your emergency contacts with your location and the fact that you (or someone around you) is in trouble.

An amazingly considered aspect of this feature is the “anywhere in the world” part. If you are in a different country, you may actually not even know the emergency services number, but your Apple Watch does. So no matter where you are, and regardless of whether you know how to do so, you can hold down the Side Button on your Apple Watch running watchOS 3 and it will send help your way.

Along with the end of the Friends interface, it seems that watchOS 3 marks the termination of Glances. In watchOS 1 and 2, Glances were the interface accessed by swiping up from the bottom of the Watch Face. These were snapshots into the information provided by various apps, but could not accept any input other than tapping anywhere on them to open the app in question. At first glance 1 it seems that the functionality of Glances has been moved into the Dock interface, where apps are supposed to have their snapshots of information updated regularly so as to be always, or at least mostly, up to date. However, the snapshots in the Dock are actually snapshots of each app’s actual interface, which in watchOS 2 was something designed completely separately from each app’s Glance.

Replacing the swipe-up gesture on the Watch Face which used to bring up Glances is the new Apple Watch Control Center. This is an interface of buttons, most of which used to be clustered in the leftmost Glance in watchOS 2. From what Apple showed in their screenshot, Control Center will include the current battery percentage of the Watch, a button to switch into Airplane mode, a Silence button, a Do Not Disturb button, an iPhone locator button (which makes your iPhone ring regardless of whether its sound is off), and a new Lock button (which presumably locks your Watch, but maybe could lock some of your other devices too?). At the top Control Center also shows whether your Watch is connected, and whether it is via the cloud (Wi-Fi) or directly to your iPhone over Bluetooth. There also seems to be more options below, but they didn’t scroll down durning the keynote. I’m hoping the music controls from the watchOS 2 music Glance will be there, as that is the main reason I ever swipe up in watchOS 2, and the only use I have for Glances that I will be sad to see go away (I rarely use the watchOS 2 Glance with the Control Center features).

One of the main complaints about watchOS 2 regards how slow it is, and Apple claims to have mostly fixed this on watchOS 3. According to Apple, app launching happens a full 7 times faster on the new OS than it did on watchOS 2. Furthermore, watchOS 3 includes improvements in background fetching of information which should allow apps to stay more up to date more of the time. Complications should see these improvements in particular, as Apple now guarantees that they will receive updates up to 50 times per day, a guarantee that was not present in watchOS 2. Time will tell if these claims pan out, but I’m hoping that the Watch can hold up to them, even on its current hardware.

For fitness and health improvements, one big focus Apple has taken is on adding social features. In watchOS 3 users will have the option of sharing their fitness data with friends and family. You can then see the data of those who have shared with you, and compare yours to theirs by sorting daily activity information on a variety of metrics. You can even receive notifications regarding the progress throughout a day of those who have shared with you. Activity sharing is connected with the Messages app, so you can communicate back and forth with Smart Replies that are specifically geared towards fitness and activity goals and competitions.

The metrics which you view yourself while working out have been expanded to display five different metrics on screen at once: distance, pace, active calories, heart rate, and elapsed time. The Apple Watch will also detect temporary stops in workouts and pause the workout until you start again.

watchOS 3 includes an all new app called Breathe, which can walk users through deep breathing sessions to calm and relax them. These walkthroughs can be visual by looking at the Watch throughout, or they can occur via haptic feedback and vibrations which will communicate directions. The sessions will last between one and five minutes, and at the end of them users will receive a heart rate summary based on the exercise.

Fitness and health features in the Watch have also been improved for wheelchair users. After enabling an option, wheelchair users can have their activity tracked based on a variety of different pushing methods, as well as seeing notifications for it being “time to roll” rather than “time to stand”. Apple has worked with some top organizations which provide aid to those in wheelchairs in order to identify many of the most common pushing techniques for moving the chairs, and track activity based around them.

In watchOS 3, Apple has consolidated the steps involved in sending messages to contacts, removing the step of hitting the “Reply” button and placing the controls for replying directly on the notification view for new messages. Message replies are now more powerful and expressive with the addition of stickers and handwriting recognition, or “Scribbles”, as well as new expression options such as invisible ink or shout messages (more on these coming in my iOS 10 overview). All of the options for replying to messages are available in the same spot, so you can pick between them and send whichever response you wish right away without having to drill down multiple levels to get to the right place.

watchOS 3 packs in several new watch faces, such as a Minnie Mouse face to match the old Mickey face, an Activity face to see your activity rings large at any time, and a new Numeral face which is extremely minimal. Apple has also added Complications to some of the older watch faces, including the Photo, Time Lapse, and Motion faces. The new Faces Gallery view in the Apple Watch app on the iPhone will allow you to easily see which third-party apps offer which complications so you can more easily pick those you like best. Finally, Apple Watch faces can now be switched between simply by swiping left or right from either edge of the Watch while on the main watch face view. Apple hopes making switching between faces even easier will encourage more Watch users to swap faces based on their mood or a day’s events.

Other new watchOS 3 features include the addition of the new Home app to control your HomeKit devices directly from your wrist, the ability to use
Apple Pay inside of Apple Watch apps (a feature that has been on iPhone for a while now), and perhaps most notably, the ability to unlock your Mac automatically if your Apple Watch is unlocked and nearby when you open your Mac. While I can definitely see some potential security implications of that last feature, I’m hoping that Apple has taken those into consideration, and that this feature will purely be a big convenience.

All in all, watchOS 3 seems like a great update over the Apple Watch’s previous operating system. Apple is making a lot of promises with the new OS, and I will be very intrigued to see how well they are able to pull them off. Speed improvements are much needed, and the rethinking of some of the poorer interface design elements of watchOS 2 and earlier show that Apple does not have too much hubris to admit when it is wrong and change course. I’m looking forward to getting my hands on the update and diving deeper into the messaging and other enhancements, and I’m hoping that they do start to provide enough functionality that I can start using my Apple Watch for more than just triaging notifications and checking the time.

The watchOS 3 developer preview is out now on Apple’s developer portal, and will be released as a free update for all Apple Watch users this Fall.