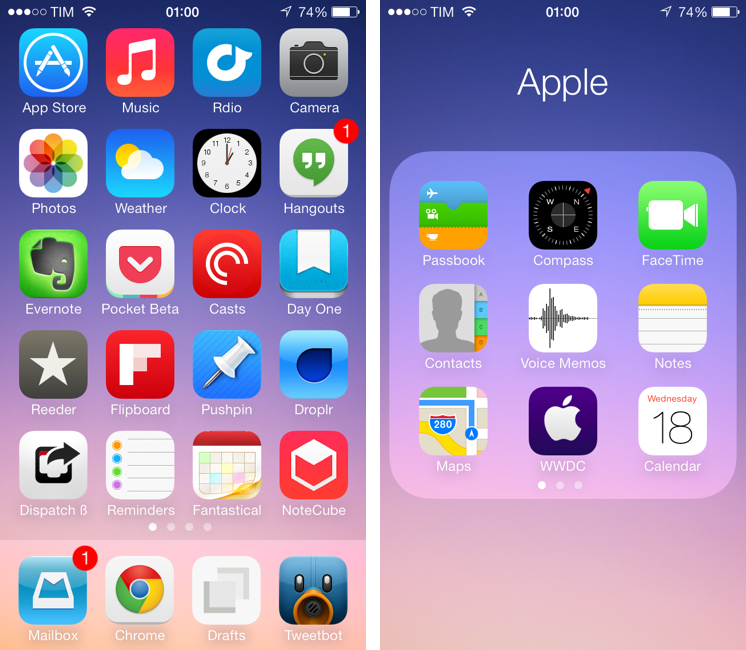 iOS 7, released today, is a deep reimagination of Apple’s mobile platform: using familiarity and the need for a reset as catalysts, iOS 7 represents Apple’s attempt to make iOS ready for the future. iOS 7 is, effectively, the epitome of a large company that knows it’s time to get rid of cruft and inconsistencies to bring a new order to a platform that has grown exponentially in the past five years. For developers, iOS 7 brings powerful new tools that will allow for a new generation of more flexible, intelligent, and versatile apps. iOS 7 is not perfect: there are rough spots and some wrong assumptions, but it’s not flawed or, as many will argue in the next few weeks, a “mistake”. It would be extremely silly and shortsighted to judge iOS 7 by the look of its application icons or the gradients Apple has decided to use on some graphics. More than any other Apple product, iOS 7 isn’t just defined but how it looks: iOS 7’s new look is devoted to functionality – to how things work.

It’s difficult for me to offer a comprehensive review of iOS 7 today, because I have only been able to test a fraction of the third-party apps I will use on a daily basis with my iPhone and iPad mini. Mirroring the concept of “design is how it works”, I would say that, for me, iOS isn’t just how Apple’s apps work on it – it’s increasingly become about how apps from third-party developers can take advantage of it.

I have been running iOS 7 on my iPhone 5 since Apple released the first beta in June. I later installed the OS on my iPad mini, and have been working with an iOS 7-only setup ever since. As MacStories readers know, I primarily work from my iOS devices, which helped me get a good idea of how iOS 7 will change the way I write, take photos, respond to emails, listen to music and podcasts, and all the other things that I use iOS for.[1] Fortunately, I had the chance to test a good amount of third-party apps that solidified my thoughts on iOS 7 and the way it impacts my digital life and workflow.

It was also hard to get ahold of fellow iOS 7 users in my town. While I imagine that it would be easier to come across a nerd running an iOS 7 beta at a bar in San Francisco, I didn’t have much luck in Viterbo, Italy. I tested new features like AirDrop – which allows you to share files and information locally with other iOS 7 devices – with my iPhone and iPad, and, in the past week, managed to convince my girlfriend to install iOS 7 on her iPhone.

I needed to provide this context: my livelihood directly depends on iOS and how I can work from my iPhone and iPad without having to use my Mac. Therefore, if you’re looking for a list of new features and smaller details of iOS 7 (and there are many), bookmark this article. My “review” of iOS 7 will focus on my thoughts on the update, how it made my iPhone and iPad better devices, and what I believe iOS’ future will be going forward.
END_OF_DOCUMENT_TOKEN_TO_BE_REPLACED

In some ways, iOS 6 is not a major update. And yet, in others, it’s possibly the biggest thing to happen to iOS since iPhone OS 1. Both of these assertions have far-reaching consequences for the users, third-party developers, and Apple itself.

In June, soon after the official announcement and preview of iOS 6, I concluded my general overview of the software with four questions. Looking back at that article now, those questions are more relevant than ever.

The answer to three of them is “no”. The last one – whether Google will release a standalone Maps application for iOS on the App Store – could be a “most certainly yes”, but we don’t know any more details.

iOS 6 is a controversial release, in that through the following days we’ll likely witness several news outlets and independent bloggers declare Apple’s doom or absolute genius, depending on the Internet clique they choose to side with. I think that, in this case, the truth lies somewhere in the middle – a gray area that needs a calm and thorough consideration. At the same time, I also believe that the “controversial” nature of iOS 6 needs to be analyzed for its various facets and reasons of existence. Why did Apple choose these features for iOS 6? What does the user make of it?

I have been testing iOS 6 for the past weeks, and I have (slowly) come to the conclusion that there’s no easy way to cover this update with a traditional review strategy. Instead, I have decided to take a look at the software from multiple perspectives, understanding the possible implications, downsides, and improvements for each one of them.

While last year I would have answered to the question “Should I upgrade to iOS 5 right away” with a resounding “Yes”, this year I’m not so sure about the “right away” part. END_OF_DOCUMENT_TOKEN_TO_BE_REPLACED