The Utility of iPad Multitasking

My work for MacStories and Relay FM involves writing posts, doing research in Safari, taking notes, managing email, and communicating with others. I use a lot of apps every day, and while I try to automate tedious and repeating tasks as much as possible, there’s always quite some switching required to jump from app to app, even after the extensibility brought by iOS 8.

iOS 9 has profoundly changed the way I work from my iPad. This has been true for Apple apps, as well as third-party ones I’ve been testing this summer.

I’ve come to use Apple’s Notes app every day. Thanks to its built-in support for Slide Over and Split View, I’m using Notes as a persistent scratchpad next to Safari, Mail, and Messages. While the use case is the same as before – I’m taking notes or reading text from a note – the speed and the simplicity granted by multitasking are completely new. I’ve been able to read Apple’s documentation for iOS 9 on one side of the screen and take notes at the same time with Notes in Split View; I can scroll my Twitter client, take a quick note with Slide Over, and later reopen that note while I’m talking to Myke so we can go through the thoughts I saved.

Notes and multitasking have also been phenomenal additions when testing new apps and updates for MacStories reviews. When I’m trying a new app, I can use multitasking to save first impressions about the interface and user experience. Later, when I have to send feedback to the developer, I can put Mail and Notes in Split View, copy and paste text, and I’m done. 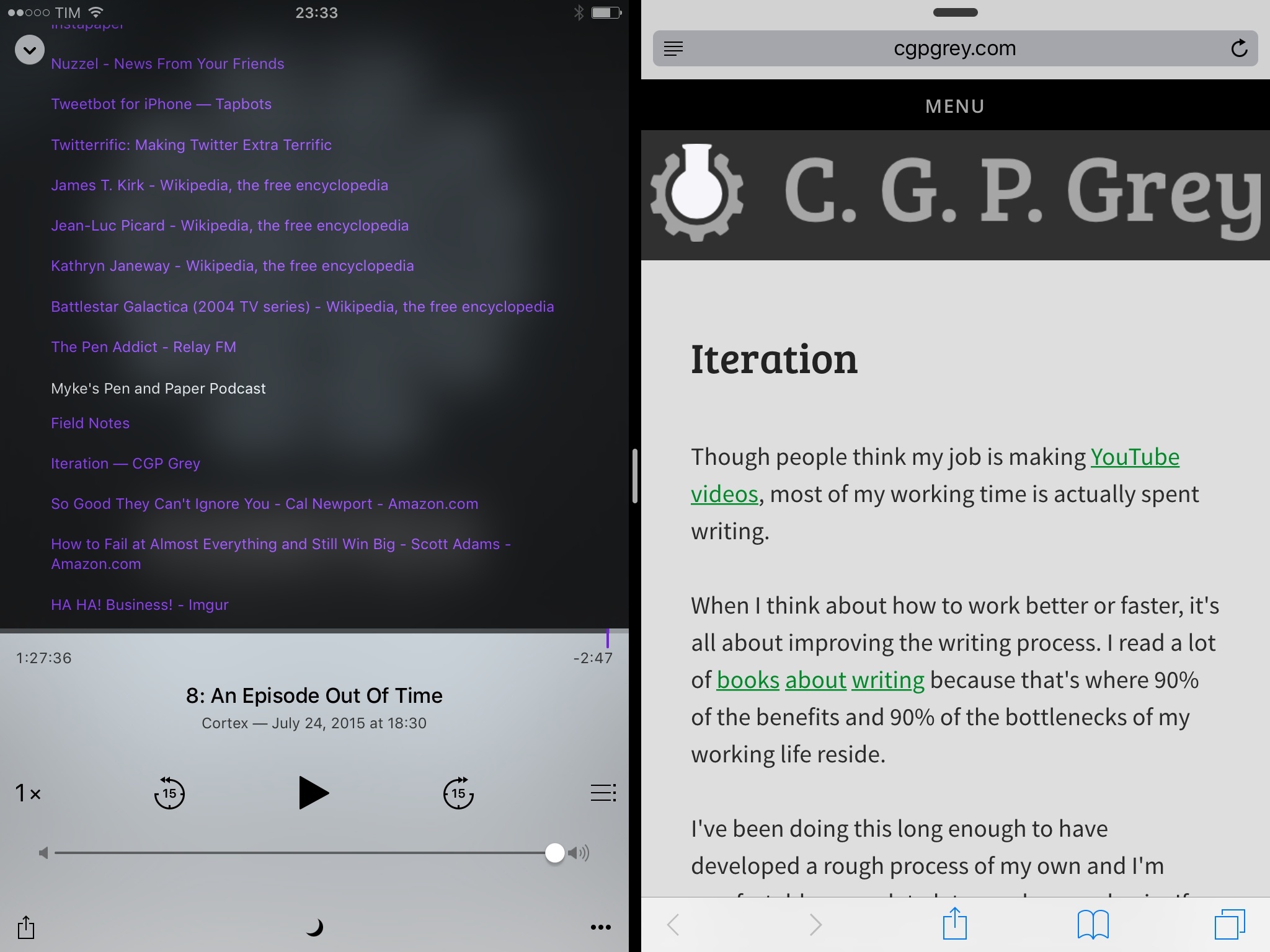 The savings granted by iPad enhancements in iOS 9 may seem small as individual entities, but they add up over time. If I’m listening to an episode of Mac Power Users and I want to open show notes in the browser, I can just put Safari next to Podcasts, tap all the links I want to check out, and Split View will open those links in Safari on the right side. 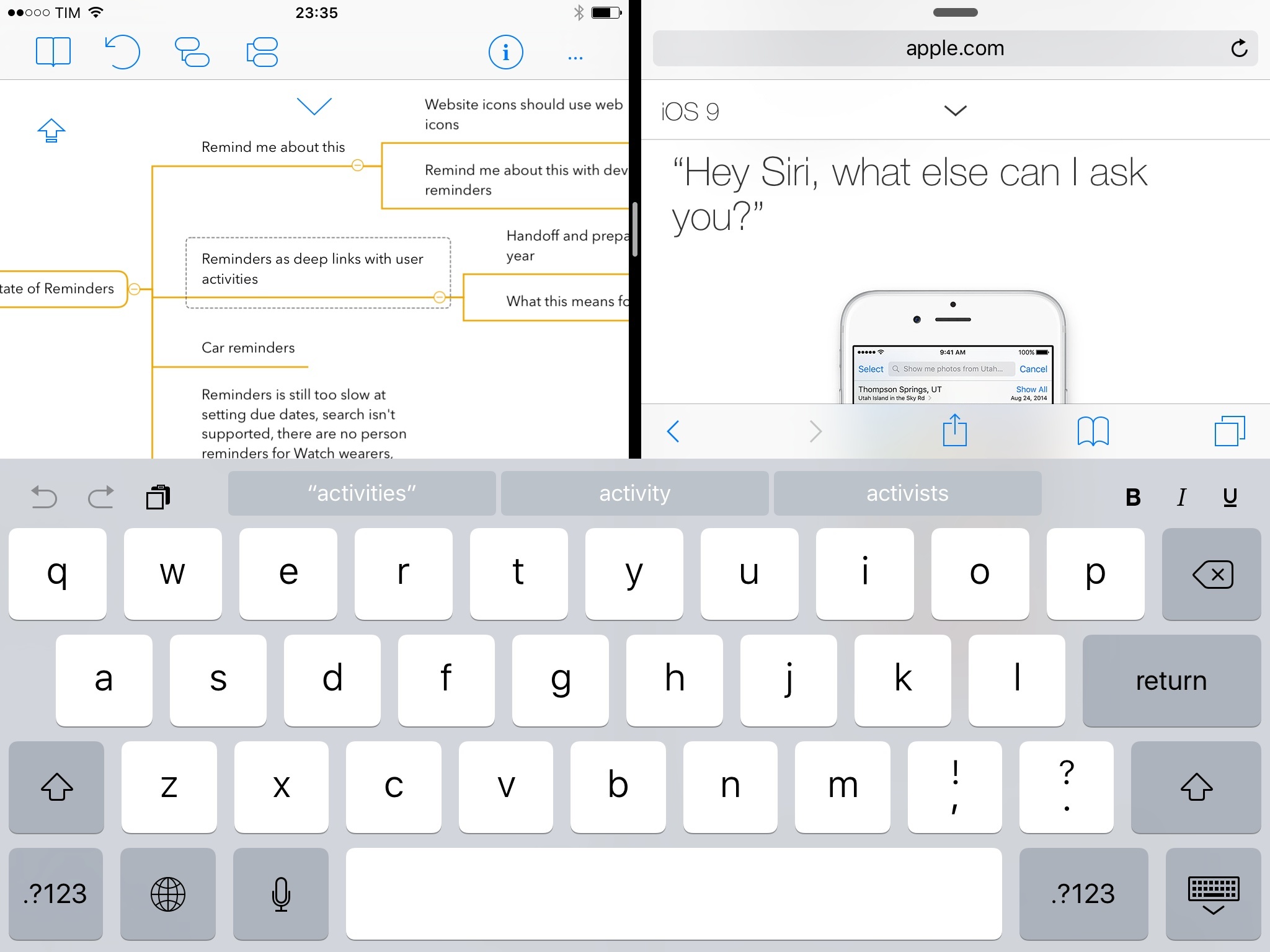 If I’m researching a topic and I realize I need to visualize it with a mind map, I can fire up the excellent iThoughts, split the screen to have Safari next to it, and turn my iPad into a more proficient research tool that is both a mind map and a browser at the same time.

In fact, this review has been entirely researched, composed, and edited on my iPad Air 2 thanks to iOS 9’s new iPad features.

Soon after Apple seeded the first beta of iOS 9 to developers, I installed it on my iPad and started working on iOS 9 research. Since then, I only used a Mac twice for tasks related to the review that couldn’t be done on iOS. First, I had to install the beta OS on my iPad and transfer WWDC session videos to the Videos app with iTunes.35 Then, I had to use El Capitan’s Safari Web Inspector to measure performance of Content Blockers in iOS 9’s Safari. These two occasions aside, OS X was never involved in any part of the writing or editing process on my end.

With Videos and Picture in Picture, I was able to play a WWDC session while looking up information in Safari and taking notes at the same time. With the new Shortcut Bar and cursor control gesture, formatting and editing text in a note (to fix typos, delete lines, or create headings) was quick and painless. If Picture in Picture was getting in the way, I could dock it to the side and hide it from view. For about two weeks, I only took notes, watched videos, took more notes, and copied and pasted links and images from Safari36 into Notes in Split View. I saved tweets about interesting iOS 9 features from Twitterrific into Notes with the share extension, too.

Then, when the time came to turn my notes into an outline with some kind of structure, I used a beta version of iThoughts to enter Split View so I could look at the notes and mind map side by side. This way, I was able to have my stream of notes on the right and paste them or rewrite them on the left in the mind map. iThoughts has fantastic shortcurts to create new nodes and sub-nodes with the Return and Space keys of the software keyboard, and that (combined with swiping) was a great way to create branches in seconds. If I needed to insert images in the mind map, I could use the built-in image picker or copy an image from Safari in Split View and paste it into the map. This went on for about a month. 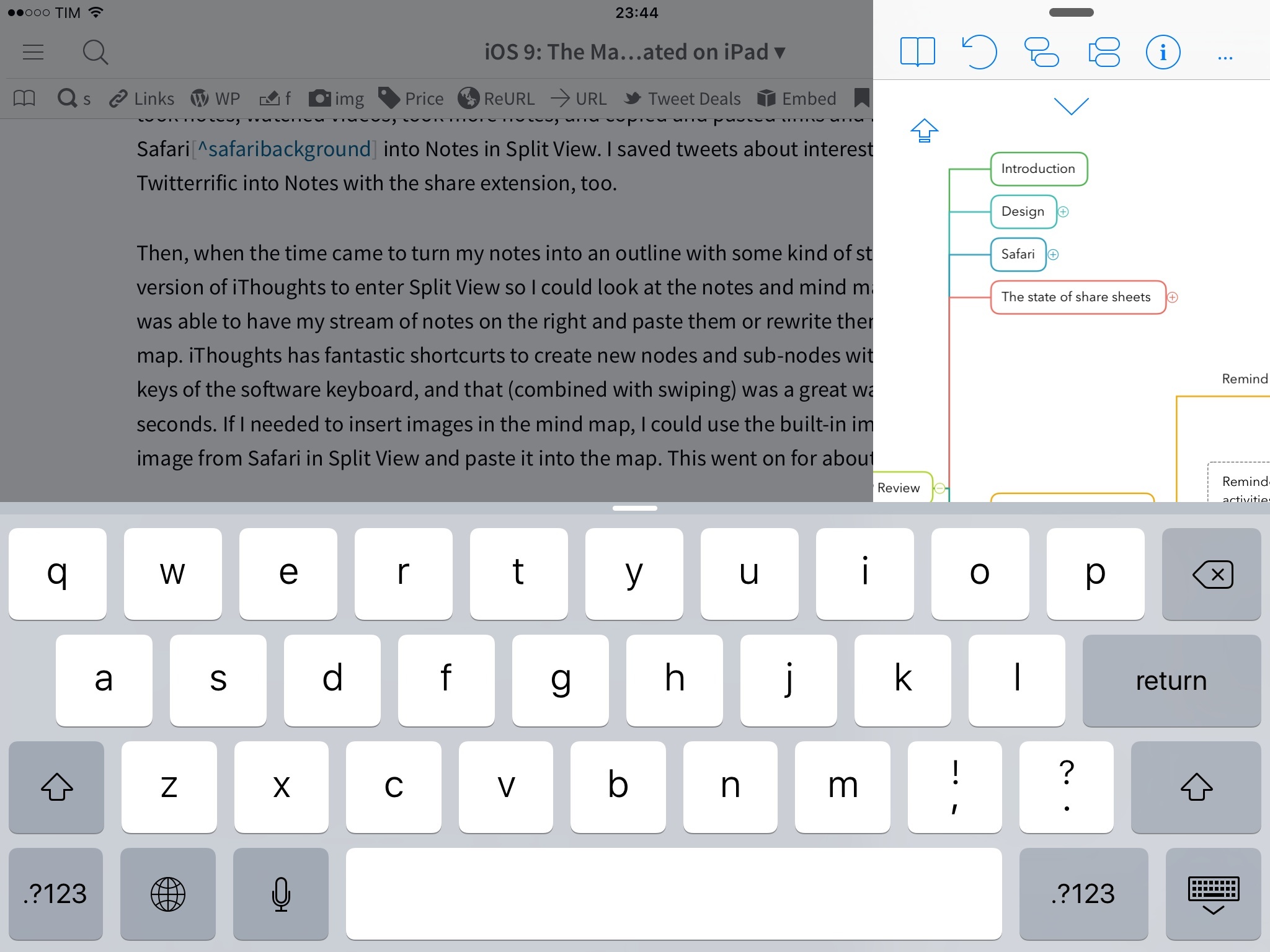 When I started writing the actual review in mid-July, I used Slide Over extensively because Editorial – my text editor of choice – didn’t support iOS 9 multitasking. This is the unsung benefit of Slide Over – it brings the convenience of iOS 9 multitasking to any app, regardless of their support for the more powerful Split View.

I’ve used everything in Slide Over while writing in Editorial. I used it to reply to iMessages without leaving Editorial so Myke and my girlfriend didn’t think I was ignoring them (I was just very focused). Safari, iThoughts, Photos, Notes, and Mail were excellent to look up my mind map and reference material while assembling chapters. Later on, as I got more betas with support for iOS 9 multitasking, I used apps such as PCalc for quick calculations in Slide Over, Terminology to look up words in the dictionary (not even Apple has something like that), and Dispatch to instantly turn new email messages into tasks. 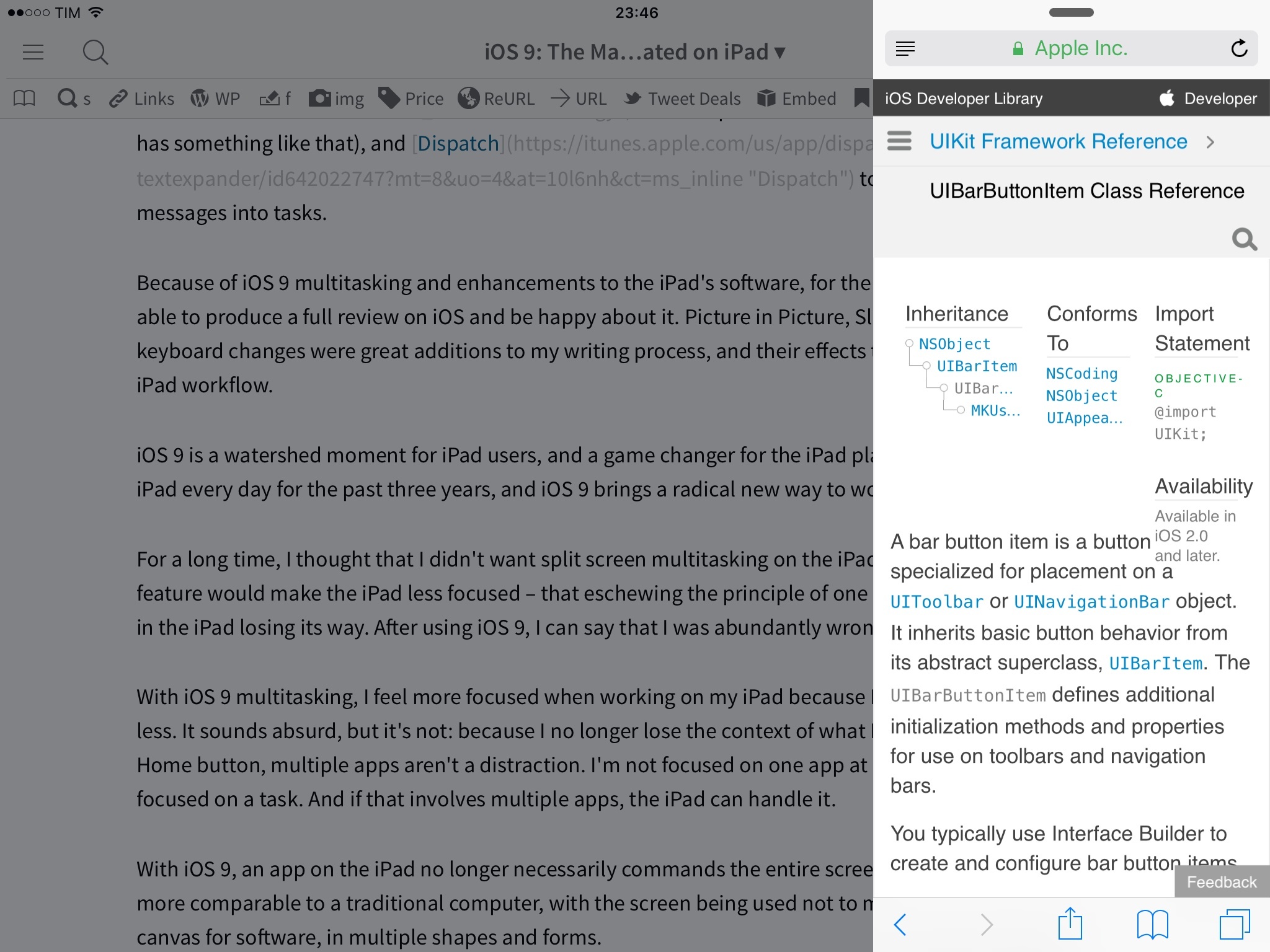 Safari is the perfect example for Slide Over.

Because of iOS 9 multitasking and enhancements to the iPad’s software, for the first time this year I was able to produce a full review on iOS and be happy about it. Picture in Picture, Slide Over, Split View, and keyboard changes were great additions to my writing process, and their effects touched every area of my iPad workflow.

iOS 9 is a watershed moment for iPad users, and a game changer for the iPad platform. I’ve been using the iPad every day for the past three years, and iOS 9 brings a radical new way to work with apps on the device.

For a long time, I thought that I didn’t want split screen multitasking on the iPad. I was afraid that such feature would make the iPad less focused – that eschewing the principle of one app at a time would result in the iPad losing its way. After using iOS 9, I can say that I was abundantly wrong. 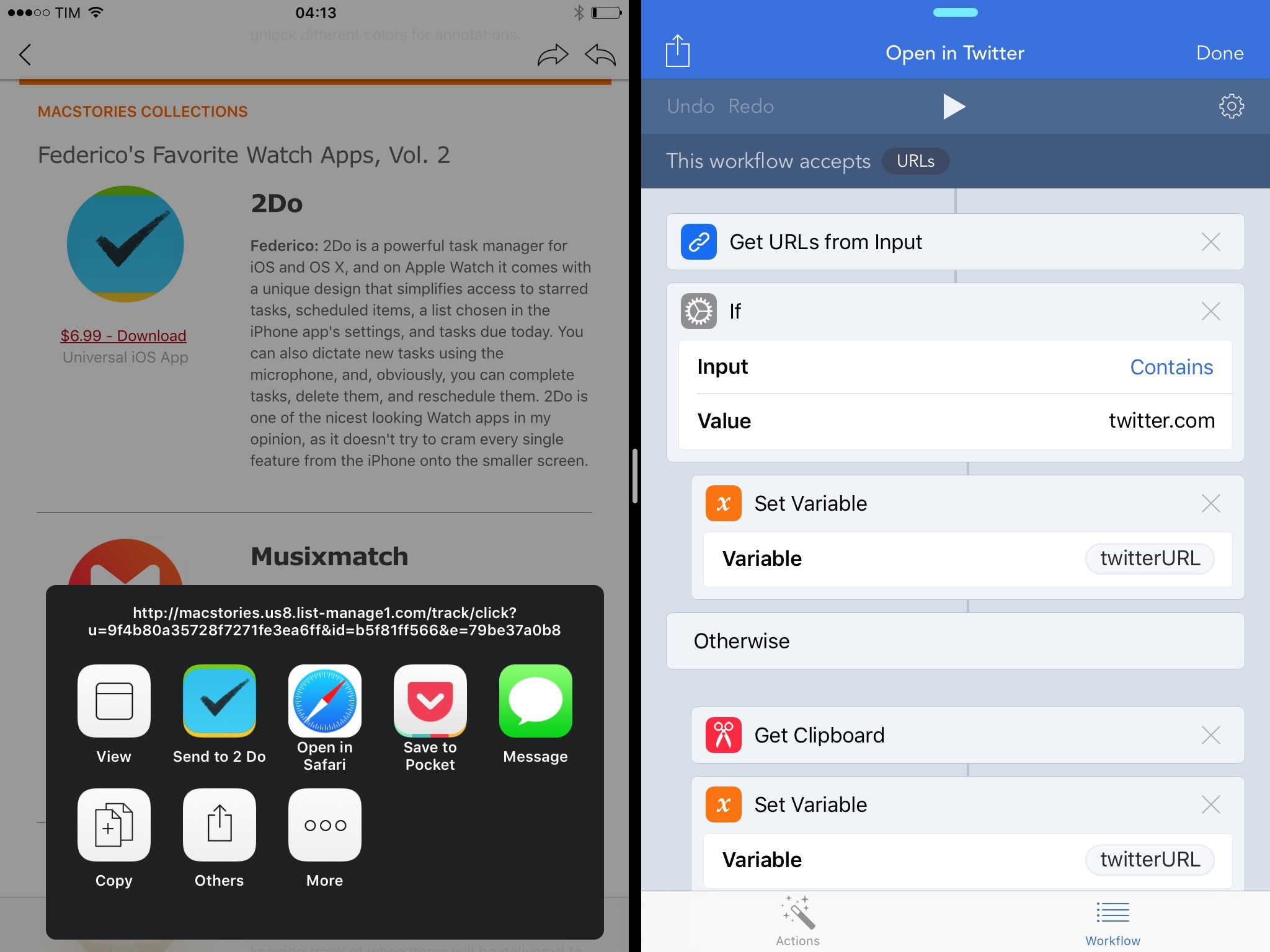 Working with Dispatch and Workflow in Split View.

With iOS 9 multitasking, I feel more focused when working on my iPad because I’m switching between apps less. It sounds absurd, but it’s not: because I no longer lose the context of what I’m doing by clicking the Home button, multiple apps aren’t a distraction. I’m not focused on one app at a time anymore. I’m focused on a task. And if that involves multiple apps, the iPad can handle it.

With iOS 9, an app on the iPad no longer necessarily commands the entire screen. This makes the iPad more comparable to a traditional computer, with the screen being used not to mimic a single utility but as a canvas for software, in multiple shapes and forms.

The complexities created by the ability to manage concurrent apps have been largely kept at bay by Apple’s design choices, which include limited compact sizes, selected corners for Picture in Picture, and, like extensions last year, a lack of tools to programmatically activate multitasking – meaning, you’ll always have to touch the screen to initiate Slide Over and Split View.

iOS 9 multitasking’s most evident pitfall is lack of drag & drop between apps in Split View. You would think that, given two apps side by side and a platform based on touch, Apple would have built a system to move information from one app to another. This isn’t available yet, and it’s my biggest wish for future iterations.

The inconsistencies of the classic app switcher and what’s still missing don’t change the underlying premise. iPad multitasking on iOS 9 transforms how the device can be used as a computer every day. I run MacStories entirely from my iPad, and multitasking has dramatically sped up how I work. But what Apple has done with iOS 9 on the iPad goes beyond multitasking alone.

For the first time since its launch in 2010, the iPad is ready to have its own unique OS. Apple’s focus on familiarity and consistency with iPhone OS was a selling point of the iPad five years ago, but with time it became a liability.

For the past four years, iOS for iPad has mostly felt like a rushed adaptation of the main iOS for iPhone, with uninspired designs scaled up from the smaller screen. iOS 9 shows some progress on this front – such as a redesigned Notification Center with two widget columns – but it’s possible to come across UIs that have been enlarged from the iPhone without proper consideration. However, the sheer amount of what’s new and exclusive to the iPad in iOS 9 offsets what is left over from the previous era.

Today, we’re seeing what iOS for iPad should be. A version of iOS that shares the same underlying technologies and design language of the iPhone, but optimized for the different hardware and interactions of the iPad. There’s still work to be done, but what we have today is an impressive step up from iOS 8. With multitasking, keyboard changes, bigger folders, and Picture in Picture, all past mistakes are forgiven.

iOS 9 is the first version of iOS that isn’t afraid to let the iPad be the iPad. Consistent with the iPhone, willing to take its own risks, and reminiscent of a Mac without the baggage of OS X.

With iOS 9, the iPad has entered adulthood.