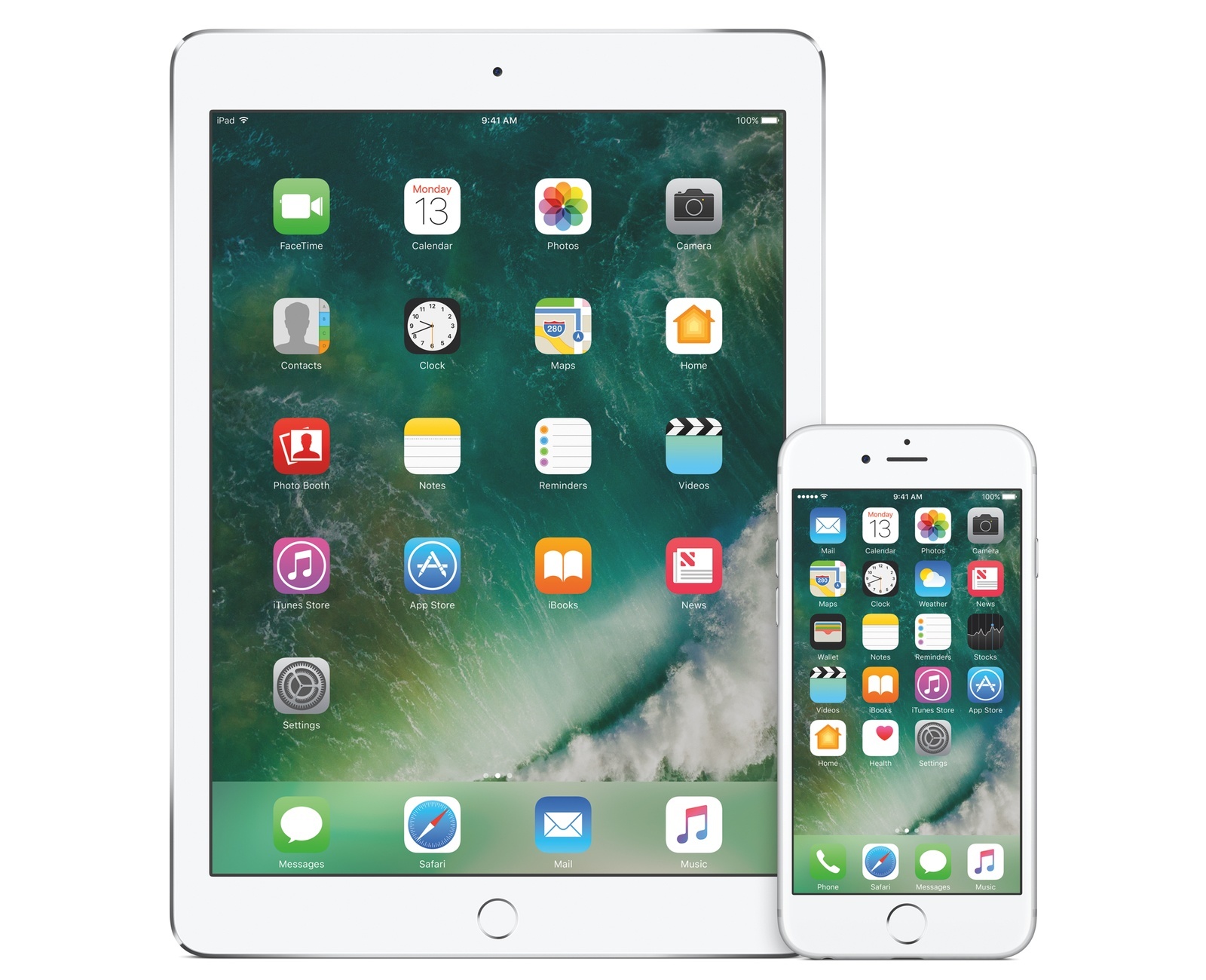 In my iOS 10 Wishes story from April1, I wrote:

I heard from multiple sources a few weeks ago that some iPad-only features will be shipped in 10.x updates following the release of iOS 10 in the Fall. I wouldn’t be surprised if some iPad changes and feature additions won’t make the cut for WWDC.

I didn’t have high hopes for major iPad-specific features to be announced at WWDC. Still, I was disappointed to see the iPad return to the backseat2 after last year’s revitalization. Every time Craig Federighi ended a segment with “it works on the iPad, too”, it felt like the iPad had become an afterthought again.

After WWDC, I strongly believe that Apple has notable iPad-only features in the pipeline, but they won’t be available until later in the iOS 10 cycle, possibly in early 2017.

What We Did Get

Before delving into what I believe is happening, I want to mention some iPad features that Apple managed to add in the first beta of iOS 10.

On the 12.9-inch iPad Pro, Mail and Notes now support a three-panel interface reminiscent of their Mac versions. This should make it easier to move across mailboxes and folders in Notes, though I suspect I’ll end up using it more in Mail.

I’d argue that the biggest change in iOS 10 for iPad is Safari split view. With this new mode, you’ll be able to view two webpages at once, which should come in handy for a variety of tasks. Safari split view doesn’t simply load two webpages in a single Safari window – it creates two concurrent Safari views. You can have one Safari view in normal browsing and the other set to private, or use Safari Reader in one view and regular Safari on the other side. 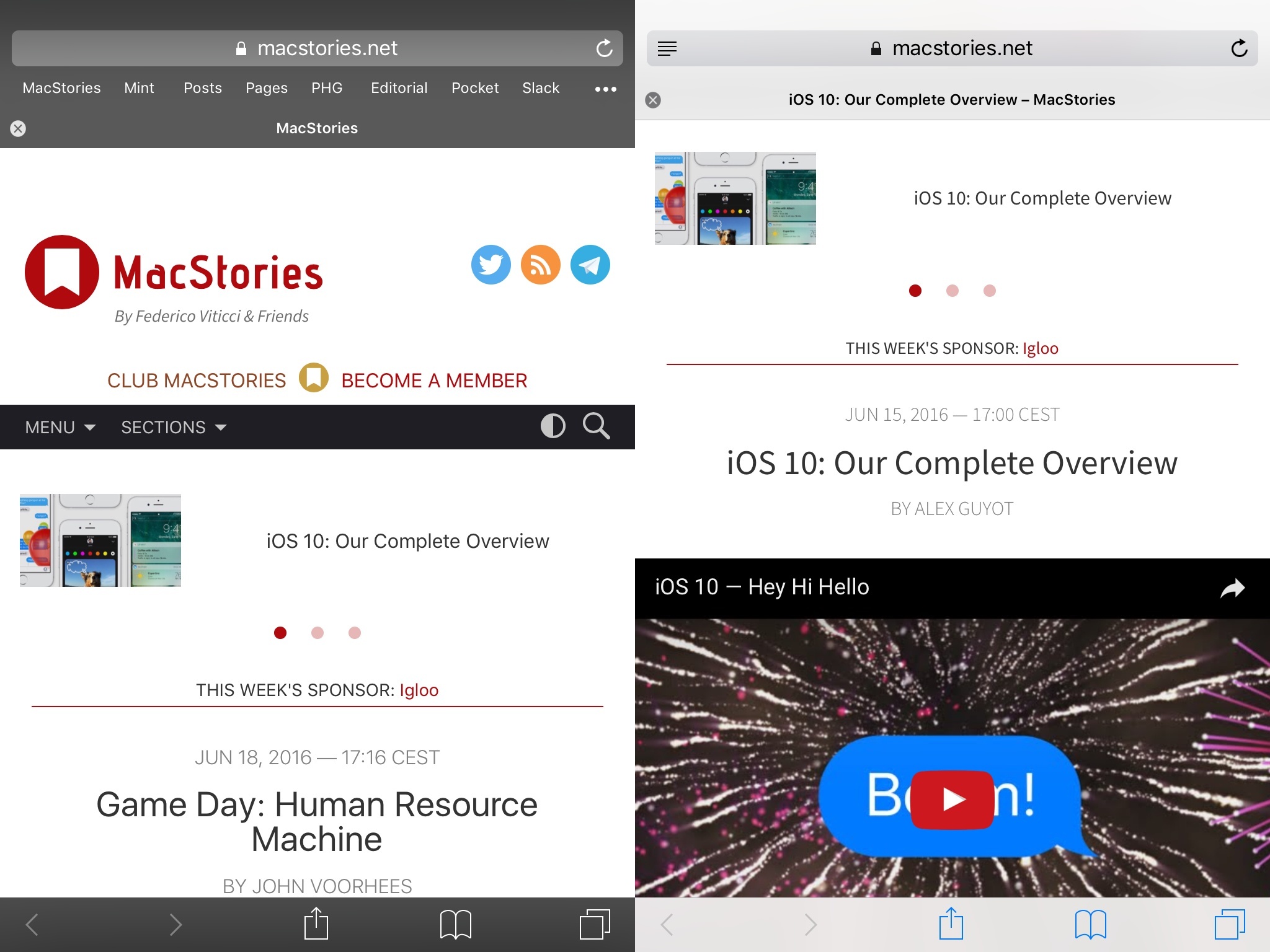 Safari’s in-app split view is solid, and it comes with a nice drag & drop animation to grab one page and drag it to the right side of the screen to create a split view.

You can even tap with two fingers on a link to quickly open it in split view.3 In my first tests on a 9.7-inch iPad Pro4, I can already see how Safari split view will save me time on a daily basis.

There are some welcome additions for external keyboard users as well. The behavior of Spotlight search has changed in iOS 10 to be in line with macOS – it opens on top of what you’re doing without going back to the Home screen. You can now take a screenshot from a keyboard (using the same shortcut of macOS, CMD-Shift-3), and a ‘Home Screen’ shortcut has been added to the Command-Tab app switcher. 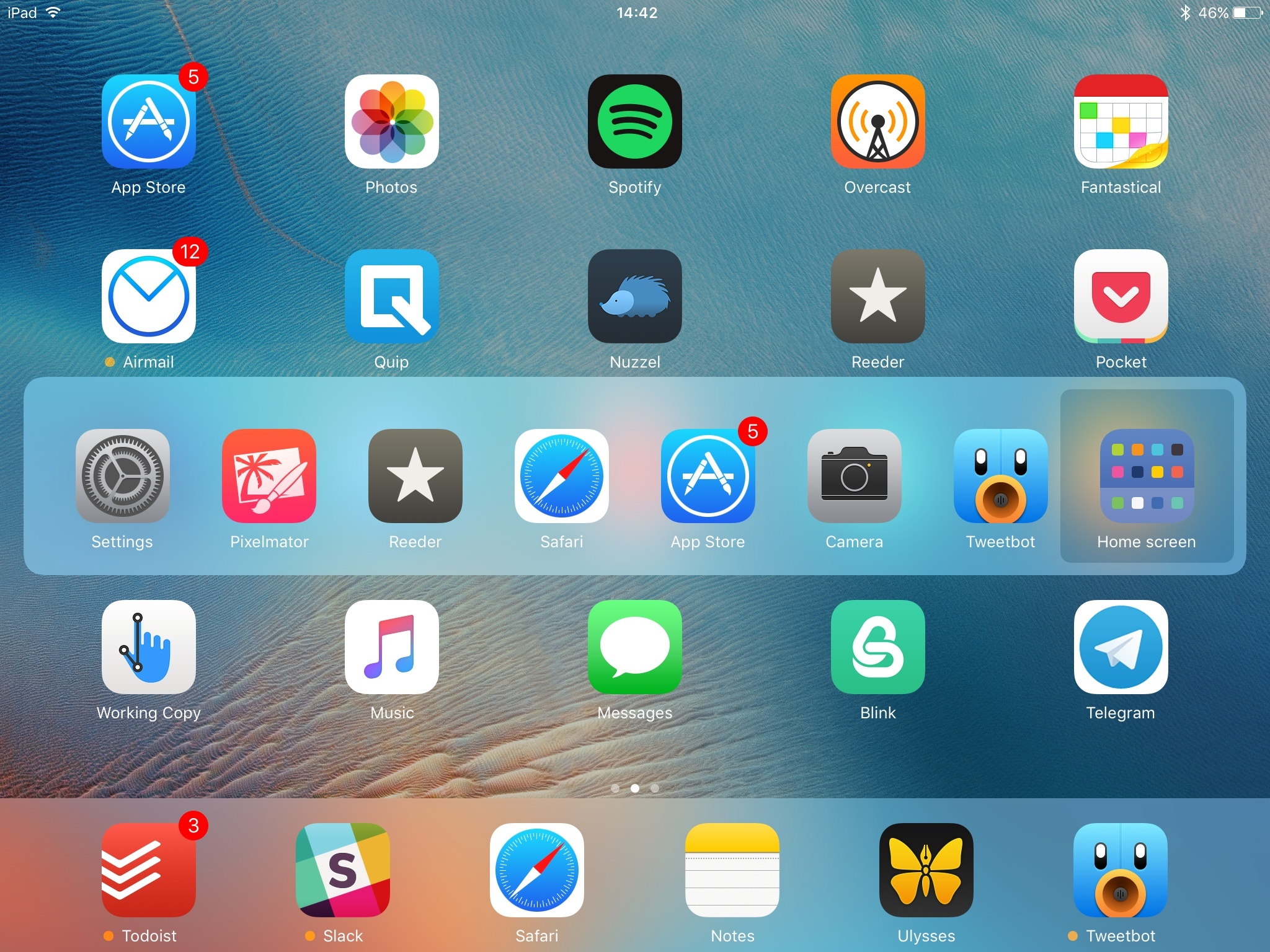 The updated Command-Tab switcher in iOS 10.

Alas, it’s still not possible to interact with Split View and Slide Over via keyboard shortcuts.

Last, I’d be remiss if I didn’t mention that iOS 10 allows you to set up an iPad for the first time in landscape mode. Finally.

A Note on Playgrounds

We didn’t get a full Xcode for iPad at WWDC 2016; unsurprisingly, Apple opted for porting the Playgrounds environment from macOS to iOS with a focus on education and learning Swift. And I think this is just as big a deal.

As someone who’s been looking to learn Swift 3, Playgrounds looks fantastic. Apple knocked it out of the park with rethinking Swift editing through touch – the special software keyboard and the way you can enclose code in loops are two of my favorite details. The lessons look great and the use of in-app split view is clever. I have no doubt other companies will start offering code samples and lessons to be imported and used in Playgrounds as well.5

I should also point out that Playgrounds is much more than a kids tool for learning how to code with games. During the week of WWDC, I’ve seen examples of messaging UIs built in Playgrounds, fully functioning web views, and even private APIs imported in the app.6 If you know what you’re doing and are familiar with Swift, you can build some pretty crazy things in Playgrounds.7

I love the idea of Playgrounds. Even if it’s not Xcode, it’s a bold first step in the right direction.

The iOS for iPad Cycle

We should be looking at what Apple did earlier this year with iOS 9.3 to understand the future of iOS for iPad.

While major iPad features such as Split View and Picture in Picture shipped with iOS 9.0 in September, iOS 9.3 was another milestone for the iPad in education. A release big enough that it deserved its own mini-site on Apple.com.

I wouldn’t be surprised to see Apple move from a monolithic iOS release cycle to two major iOS releases in the span of six months – one focused on foundational changes, interface refinements, performance, and iPhone; the other primarily aimed at iPad users in the Spring.

I think it’d make sense for Apple to dedicate more time and engineering resources to a separate, more focused iPad release. If history is of any indication, it’d be reasonable to expect more iPad changes coming with a big mid-cycle software update8 and an iPad media event in the Spring to refresh the 9.7-inch and 12.9-inch models.

Looking at the first beta of iOS 10, we can also infer what could be coming to the iPad during the iOS 10 cycle.

The three-panel Notes and Mail on the 12.9-inch iPad Pro and the redesigned Apple Music with a vertical music player suggest that Apple has been thinking on how to further optimize their UI for the iPad’s bigger screen. There are still too many instances of the iPad’s interface being an unimaginative and sloppy adaptation of its iPhone counterpart. The few changes in iOS 10 are welcome, and I expect to see more of them across the iPad line.

The key functionality missing from the iPad at this point is drag & drop between apps in Split View. The consensus from people I spoke with at WWDC is that Apple has been laying the groundwork for a proper drag & drop system framework. I’ve always found it odd that Apple hasn’t been pushing for more drag & drop features on iOS – a platform naturally suited for direct manipulation of content. I hope the ability to drag & drop stickers in iMessage threads and the new Safari drag & drop tab behavior are signaling changes coming down the road.

Speaking of Safari and tabs, I expect to see more in-app split views in Apple’s apps. In theory, nothing is stopping third-party developers from doing that today – just look at what iCab does for split web browsing, for instance – but I feel like Apple should set an example for others to follow. Apple should bring in-app split view to more apps where it’d make sense (Pages, Mail, Numbers, etc.).

Finally, 3D Touch. It’s safe to assume that it hasn’t been brought to the iPad yet because of simple ergonomics: the larger the surface, the harder it gets to apply the right amount of pressure while still holding the device. 3D Touch was designed with one-handed operation in mind, so your hand can hold the iPhone in the back as you apply pressure on the screen. That would be uncomfortable (or downright impossible) on an iPad. I’d be extremely surprised to see 3D Touch come to the iPad next year.

iOS 10 is shaping up to be a solid release, even if it doesn’t necessarily appeal to some parts of the indie developer community.

Messages is going to be a blockbuster – it is, for me, the single biggest announcement from WWDC 2016. SiriKit has been built very consciously and deliberately, and we can only imagine that more domains and intents are coming after the first initial seven. There are hundreds of refinements throughout the OS, and the general takeaway from Apple engineers I talked to is that the first iOS 10 betas will be the most stable in a while thanks to the work that went into performance improvements and reworked animations.9

I’m sad that we won’t see major iPad changes in September, and Apple still has a lot of questions to answer about the future of the iPad and pro apps. But if this means that iPad users will get more attention during the entire iOS 10 cycle – I think it’s a good move, and I’m curious to see what’s coming.