Everything Else and What I Couldn’t Test

There are dozens of other features in iOS 9 that, either in Apple apps or developer APIs, make iOS devices fast and more efficient. A few highlights:

Updated setup process. By default, iOS 9 prompts users to create a complex (6-digit) passcode when setting up a device for the first time. Other passcode types (such as 4-digit numeric code) are still available by tapping an options button. iOS 9’s setup also features a new option to move data from an Android device with a dedicated Android app made by Apple. 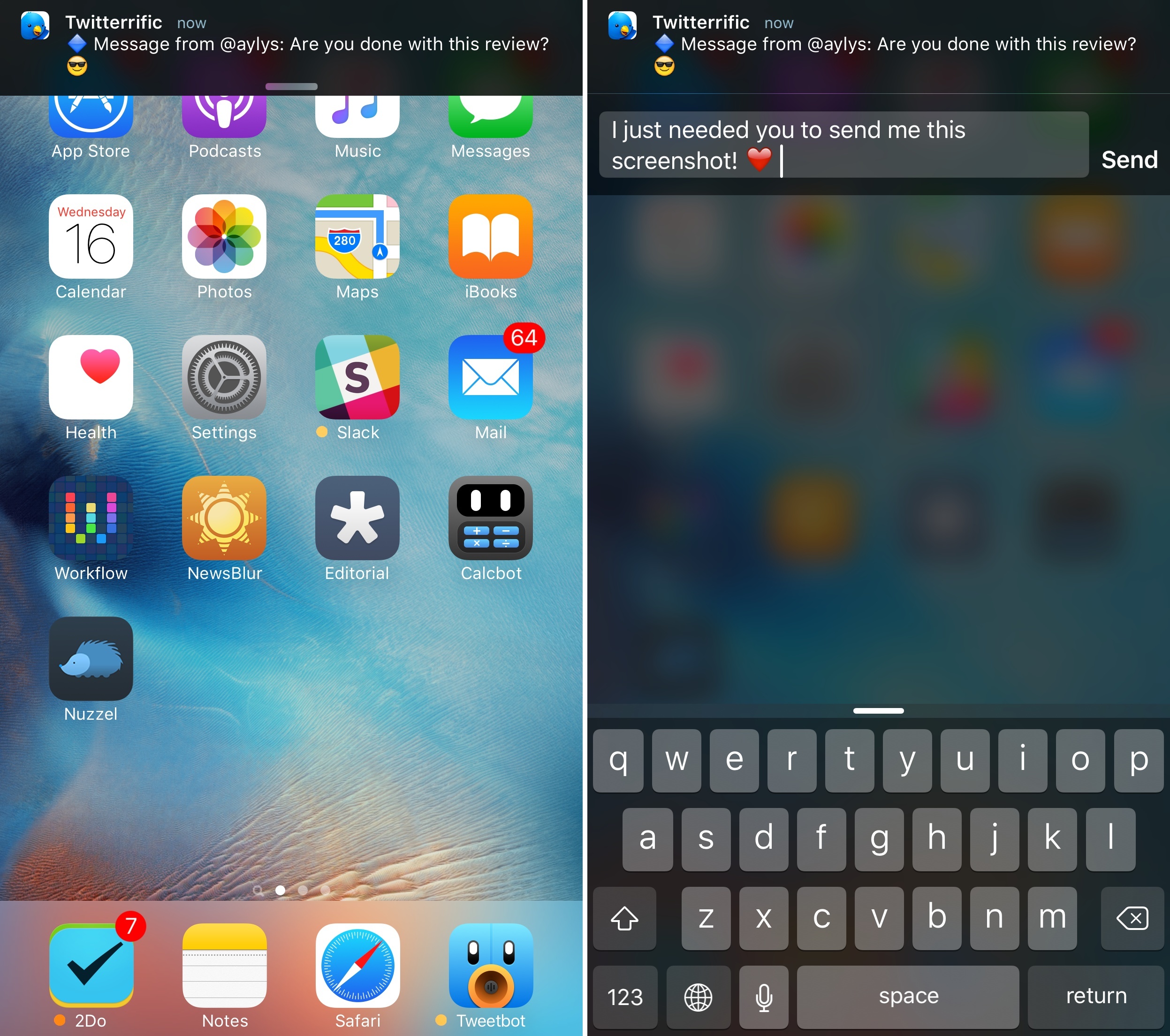 Yes, these are glorious.

Notification quick replies for third-party apps. In iOS 9, apps can implement quick replies in actionable notifications. Introduced with Messages last year, Apple has opened up the API to developers this year, allowing them to mix custom buttons with a text field to type a reply inside the notification without opening the app. I tested this feature with beta versions of Twitter clients and other apps, and it’s incredibly convenient. I expect all messenger-type apps to adopt this.

Trust developer certificates. Installing beta versions of third-party apps from outside TestFlight gets a little more convoluted (but also more secure) in iOS 9 with a new system that requires you to manually trust enterprise developer certificate. To do so, you’ll need to go into Settings > General > Profiles > Enterprise Apps and select an installed app you can trust; otherwise, it won’t launch.

Safari can save PDF to iBooks. In iOS 9, you no longer need a third-party app to save a webpage as PDF. A new iBooks share extension lets you to save any webpage as a PDF document into the app – perfect for reading articles later or sharing PDFs via email and annotating them with Markup.

Wi-Fi Assist. Available in Settings > Cellular Data, this new toggle allows an iOS device to use its mobile network when Wi-Fi connectivity is poor. A lot of people have welcome this option, but I prefer to keep it turned off as I like to know exactly which network I’m using, and the automatic switch between cellular and Wi-Fi is not clear in the UI.

ReplayKit for recording gameplay. For the first time, Apple is offering game developers an API to natively record gameplay without using a third-party SDK. ReplayKit can be initiated automatically by an app as the user is playing, or it can be started manually. Apps can ask users to record the screen only or also access the microphone to include game commentary. A video file generated with ReplayKit is then passed to the system share sheet in-app, so users can save it to the Photos app, send it to other apps, or share it on social networks. With ReplayKit, creating Let’s Plays and video reviews for iOS games should be easier and better integrated with the system.

Shared Links extensions. Apps in iOS 9 can plug into Safari’s Shared Links section to give users the ability to view links alongside RSS and Twitter links already supported in the browser. I suspect that news readers, social apps, and RSS apps will consider this extension type to make their items available outside in Safari, but I haven’t been able to test any of them yet.

Maps Nearby and route delays. In addition to public transit information, Maps for iOS 9 features Nearby categories (a more complete section of the same options in Search) to browse businesses nearby and explore places around you. Also, during navigation, Maps will show banners at the top of the screen for upcoming closed roads, roadwork, and faster routes.

Swipe down to dismiss photo previews. In iOS 9, swiping down when viewing a photo in Photos or Messages lets you close the preview instead of reaching out to the Done button at the top of the screen. Another example of a sloppy gesture that simplifies interaction and that cuts down the number of taps required to operate the OS. I’m using this every day now. 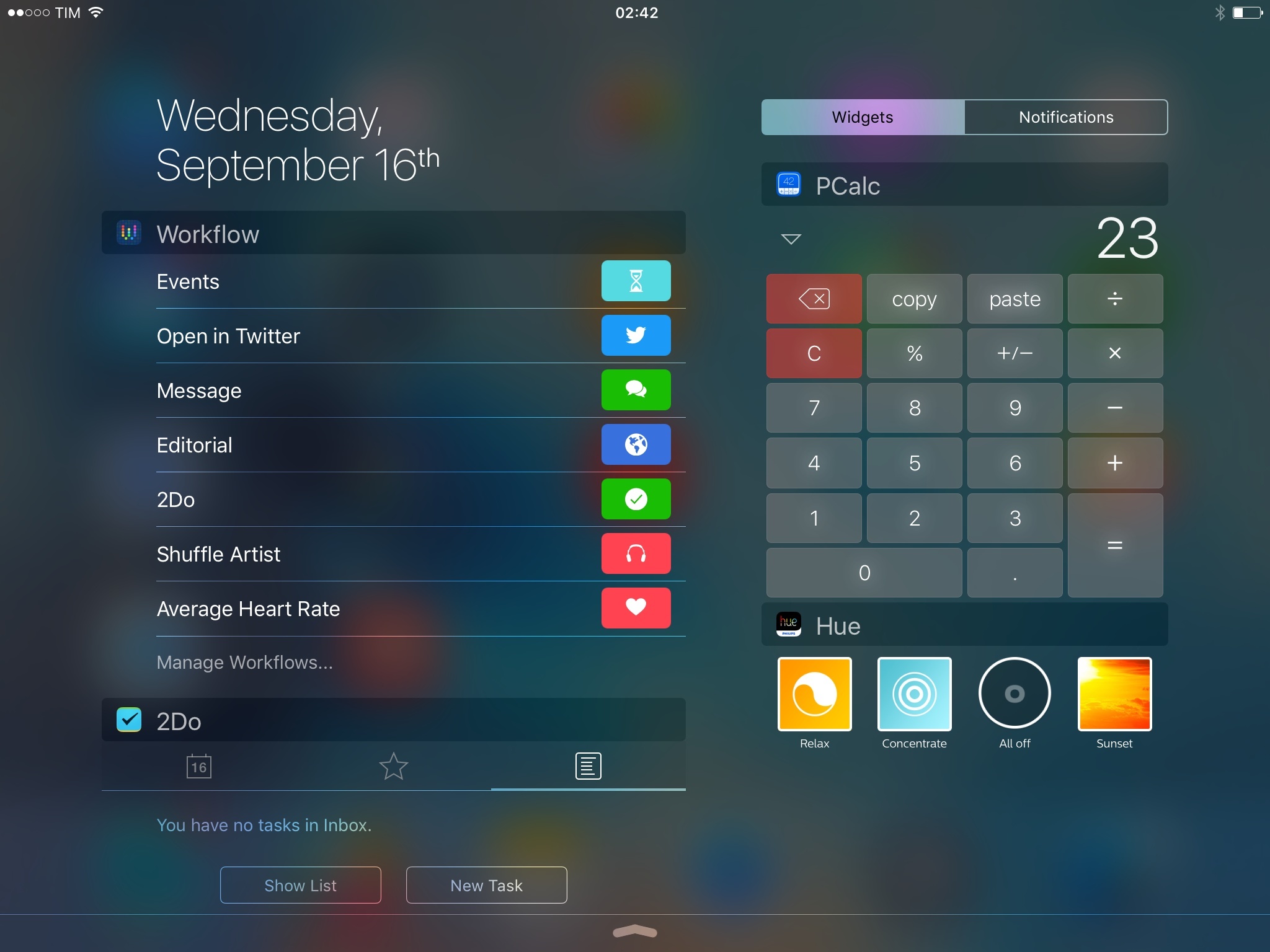 iPad Today view gets bigger. The Today view of the iPad in landscape mode has received a new two-column layout split in Today view and Widgets view. Widgets can still be added as before, but now you can choose to display them with a bigger column on the left (Today) or in a narrow column on the right. This brings a better visual organization of widgets without any functional difference between the two columns, and it takes advantage of the bigger screen to show more widgets at the same time. I’m looking forward to trying this improved layout on the iPad Pro. 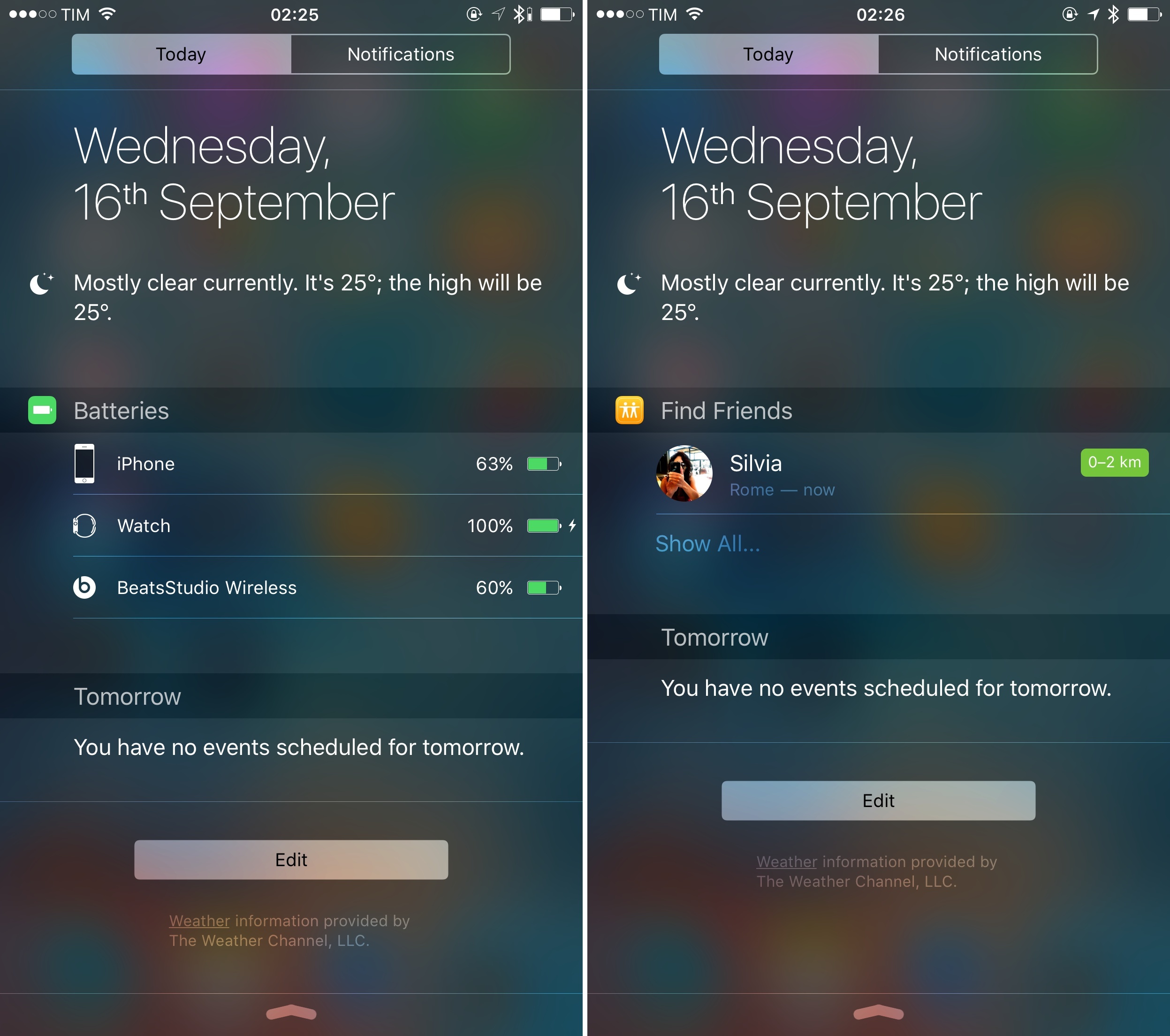 New widgets. Speaking of the Today view, iOS 9 adds new widgets for Find my Friends and to glance at the battery level of connected Bluetooth accessories as well as the device itself. The new ‘Batteries’ widget is automatically installed once you pair an Apple Watch with your iPhone – and it’s been a convenient way to check on my Watch battery level directly from my iPhone. Plus, iPhone, Apple Watch, iPad, and even Beats wireless headphones get nice icons to complement the widget’s appearance. 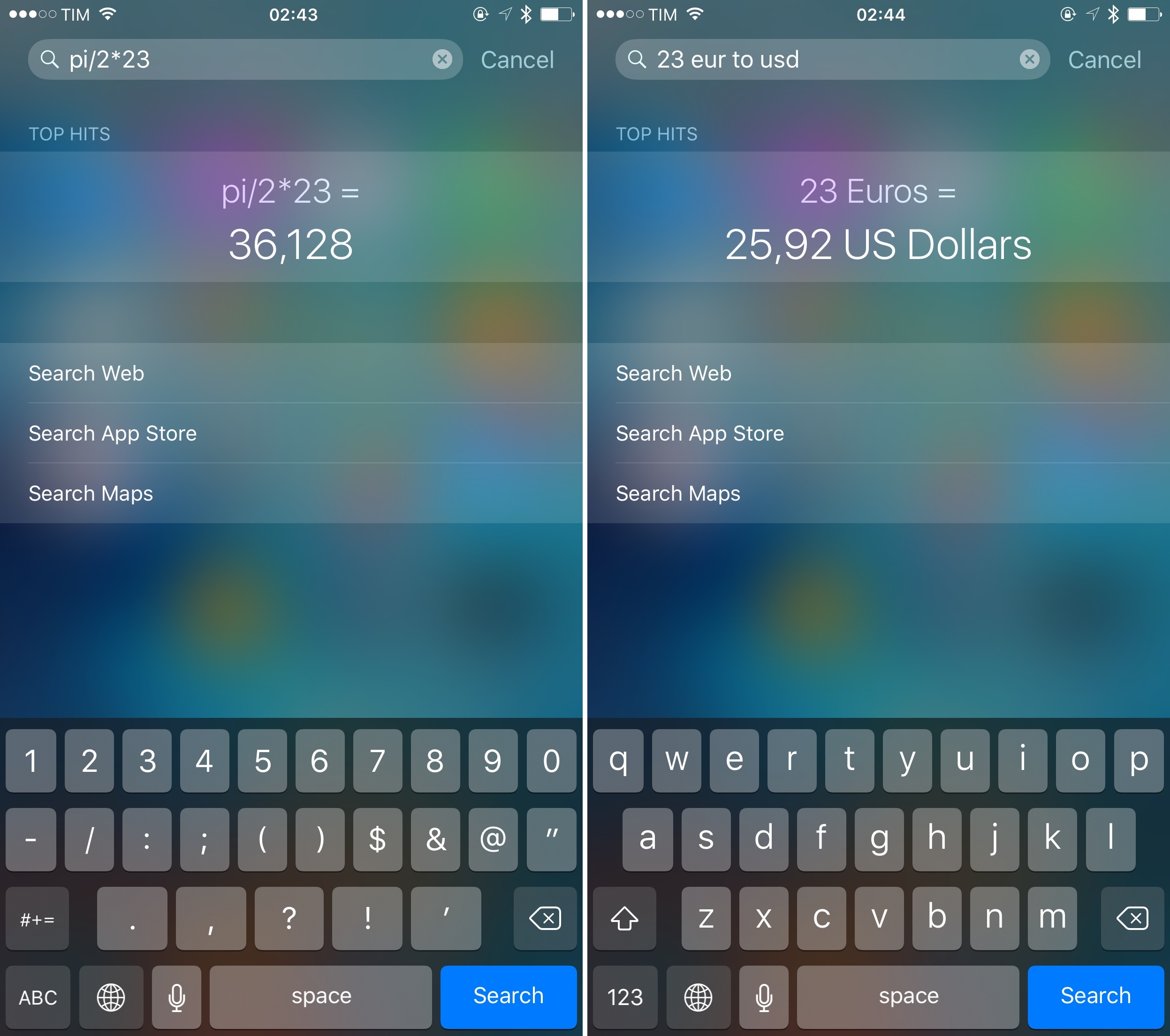 Spotlight unit conversions and calculations. The improved Spotlight of iOS 9 goes beyond Search and it borrows from OS X to let you perform quick calculations and unit conversions. You can convert currencies (type or dictate “10 USD to EUR”), perform operations (also with values such as “pi”), convert temperatures, and more. I’ve been using this regularly, and it reduces the number of apps I have to keep on my devices for basic conversions and operations. 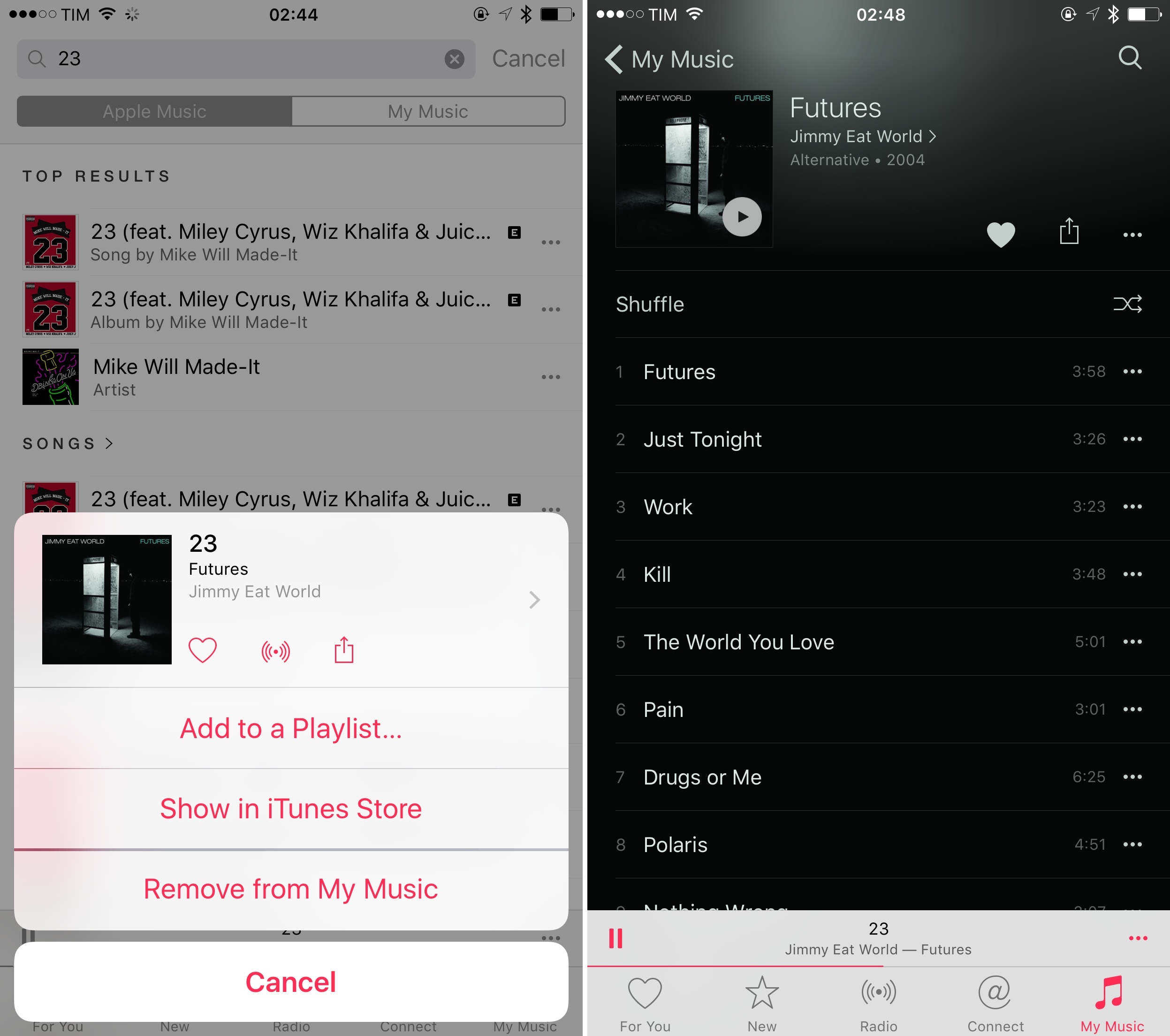 Apple Music gets a new contextual menu. The Music app went through a major redesign for Apple Music and Beats 1 in June, and iOS 9 brings a revamped contextual menu that packs more options in a cleaner presentation. The menu now displays a larger album artwork at the top that clearly indicates you can tap it to go to the selected item. Underneath it, new icons allow you to love a song, start a station, and share. A good improvement as Apple continues to fix and clean up the issues that affected the new Music app since launch.

Last, because of limitations in my country, unavailable hardware, or features that can only be tested after the public launch of iOS 9, here’s a recap of what I couldn’t test for this review: