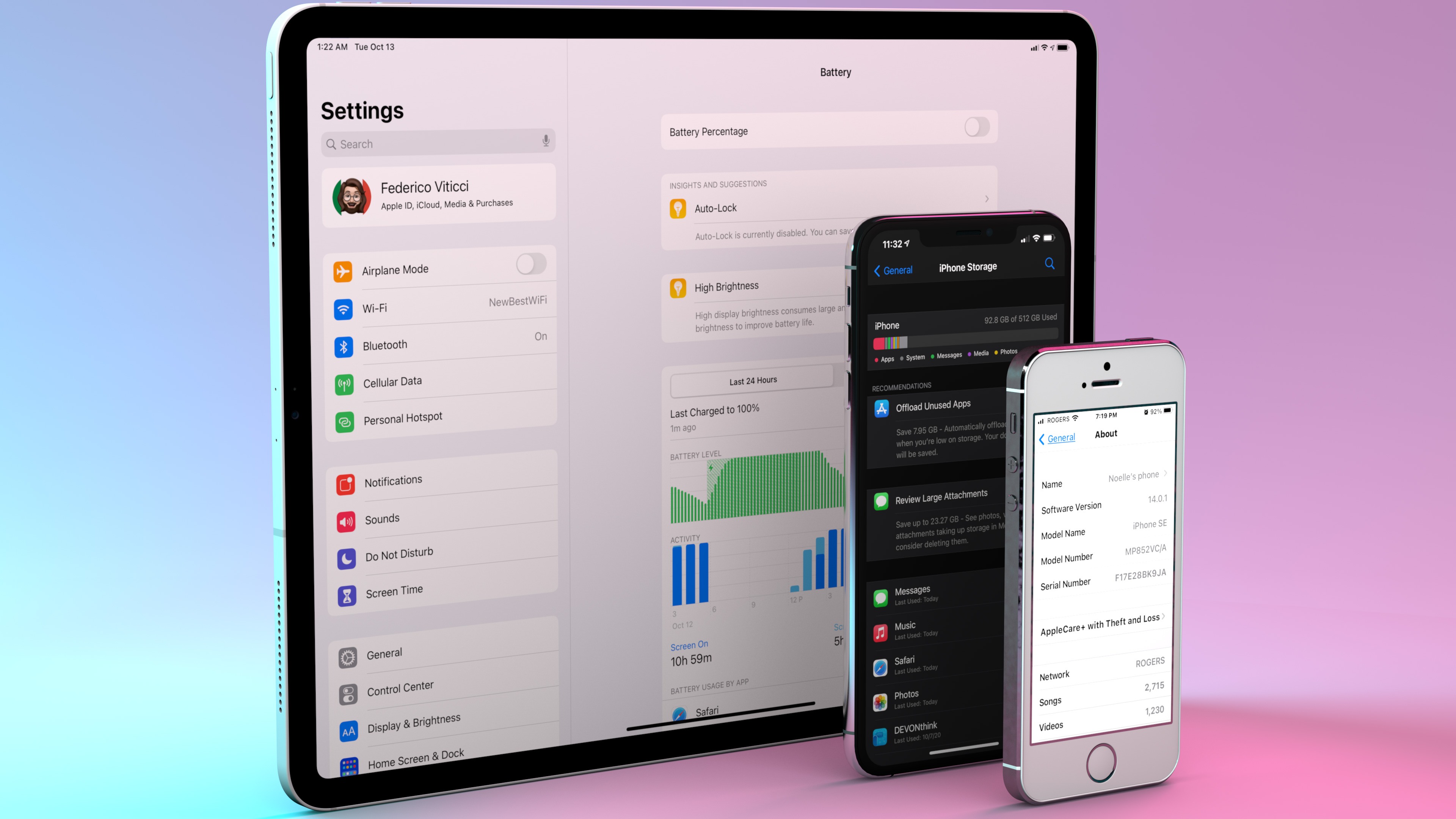 Over the past few years, the second chapter of my iOS and iPadOS reviews has usually covered setup and performance. Things are slightly different this year: there are no meaningful changes to the setup and onboarding process of iOS and iPadOS with the exception of redesigned buttons and new glyphs. Those are welcome visual updates – especially since they clarify what is a tappable button and what isn’t – but they bring no functional improvements to setting up a new iPhone or iPad for iOS and iPadOS 14. For this reason, I’m going to focus on compatibility and the performance issues I’ve noticed while testing both versions 14.0 and the 14.2 beta of iOS and iPadOS.

Screenshots throughout the story were captured on an iPhone 11 Pro Max and iPad Pro 12.9” running iOS and iPadOS 14.2, respectively. In most cases, from a design standpoint, there are no meaningful differences between iOS 14.0 and iOS 14.2; where appropriate, I’ve detailed which features or fixes will be coming in iOS 14.2.

As I wrote last year, it’s remarkable that Apple is still delivering software updates to devices like the iPad Air 2 (which was released in 2014) and the iPhone 6s line, proving once again that it’s always in the company’s best interest to keep existing customers happy without forcing them to purchase a new iPhone if they want to get access to new iOS features. As always, there are some functionalities that require newer iPhone generations than the ones technically compatible with iOS 14: for instance, Spatial Audio requires AirPods Pro, which are only supported on the iPhone 7 and later; digital car keys in CarPlay are only available on the iPhone XR, XS, and later. You can find the full list of supported features on Apple’s website here and here; where necessary, I will note in this review which features are available on which iPhone and iPad models.

The performance story of iOS and iPadOS 14 is a bit different. The short version: after last year’s unmitigated release disaster, I was hoping – based on rumors – for a return to iOS 12 levels of polish and stability. In my experience, iOS and iPadOS 14 haven’t been as buggy and rough as iOS and iPadOS 13 were at launch last year; however, I’ve encountered my fair share of bugs, crashes, and glitches in iOS and iPadOS 14.0, which haven’t met the high bar set by iOS 12 two years ago.

iPadOS 14.0 has been the most problematic release of the two for me from a performance standpoint. While on the first public release of iPadOS 14, I experienced several SpringBoard crashes on a daily basis; the Magic Keyboard occasionally stopped “accepting” three-finger gestures, forcing me to reboot my iPad Pro to get them working again; perhaps even more oddly, my iPad would outright stop responding to pointer input on the Home Screen whenever I installed or updated apps from the App Store or TestFlight. One day, I found squished icons on my iPad Pro; they only returned to their normal shape after a device reboot. 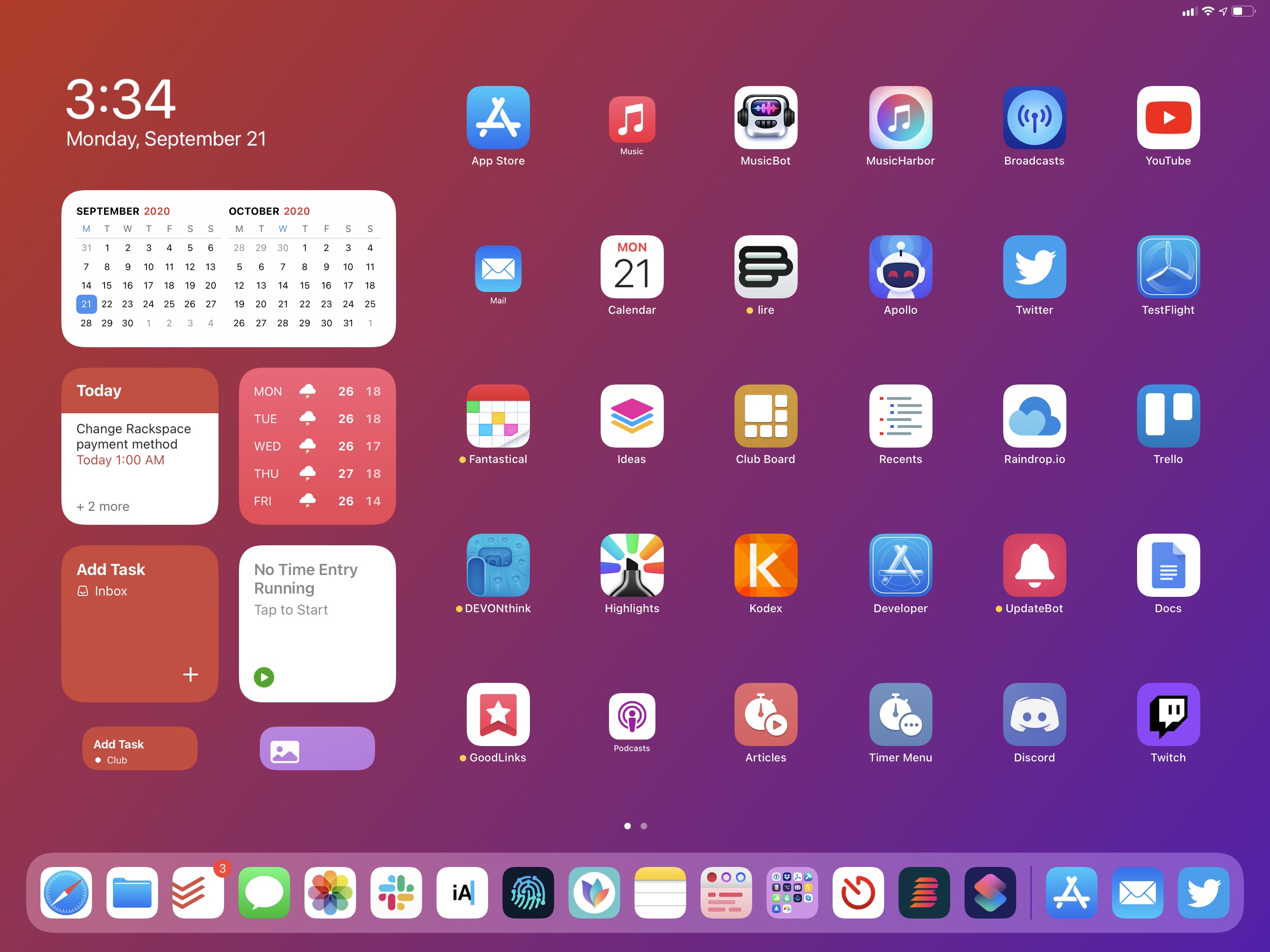 By contrast, iOS 14.0 has performed better on my iPhone and I’ve noticed gradual performance improvements over the summer beta cycle. One of my concerns going into iOS 14 was that widgets would often “get stuck” when updating data from their apps; while that happened often during the beta as I was testing TestFlight apps with WidgetKit support, widgets performed relatively well for me on the public release of iOS 14.0 and I haven’t run into cases of widgets not loading, displaying old data, or showing placeholder content. Your mileage, of course, may vary; I’ve heard from a few MacStories readers who have been experiencing these sorts of issues with widgets on their iPhones.

There’s one particularly problematic aspect of iOS 14.0 I want to point out though: rearranging icons and widgets on the iPhone Home Screen is often the cause of needless frustration and wasted time. Whenever I try to move from one page to another, or if I try to grab an app icon and drag it to a different page, it appears that iOS 14 gets a little too excited and randomly scrambles my carefully curated widget layout in ways I don’t expect. This issue is still occurring on the developer beta of iOS 14.2, and it’s hard to describe since Home Screen layouts can vary wildly from page to page, but I hope Apple can make jiggle mode more reliable and less…surprising in future updates.

As for iOS and iPadOS 14.2, I’m happy to report that this new version has fixed all the issues I was seeing with pointer control on the iPad Home Screen. I also haven’t experienced any SpringBoard crashes so far. The only problem I’ve encountered over the past couple weeks is sync delays in Shortcuts, which sometimes created conflicted copies between the iPhone and iPad when I made changes to complex shortcuts (such as MusicBot) on one device.

My overall take on the performance of iOS and iPadOS 14 is that this year’s releases haven’t been nearly as controversial as iOS 13, which is an achievement in and of itself considering the pandemic and everything else going on this year. If we evaluate iOS 14 in a vacuum, however, we know Apple can do better. At this point, I’m starting to wonder if iOS 12 will eventually be remembered as the “Snow Leopard release” in iOS history.