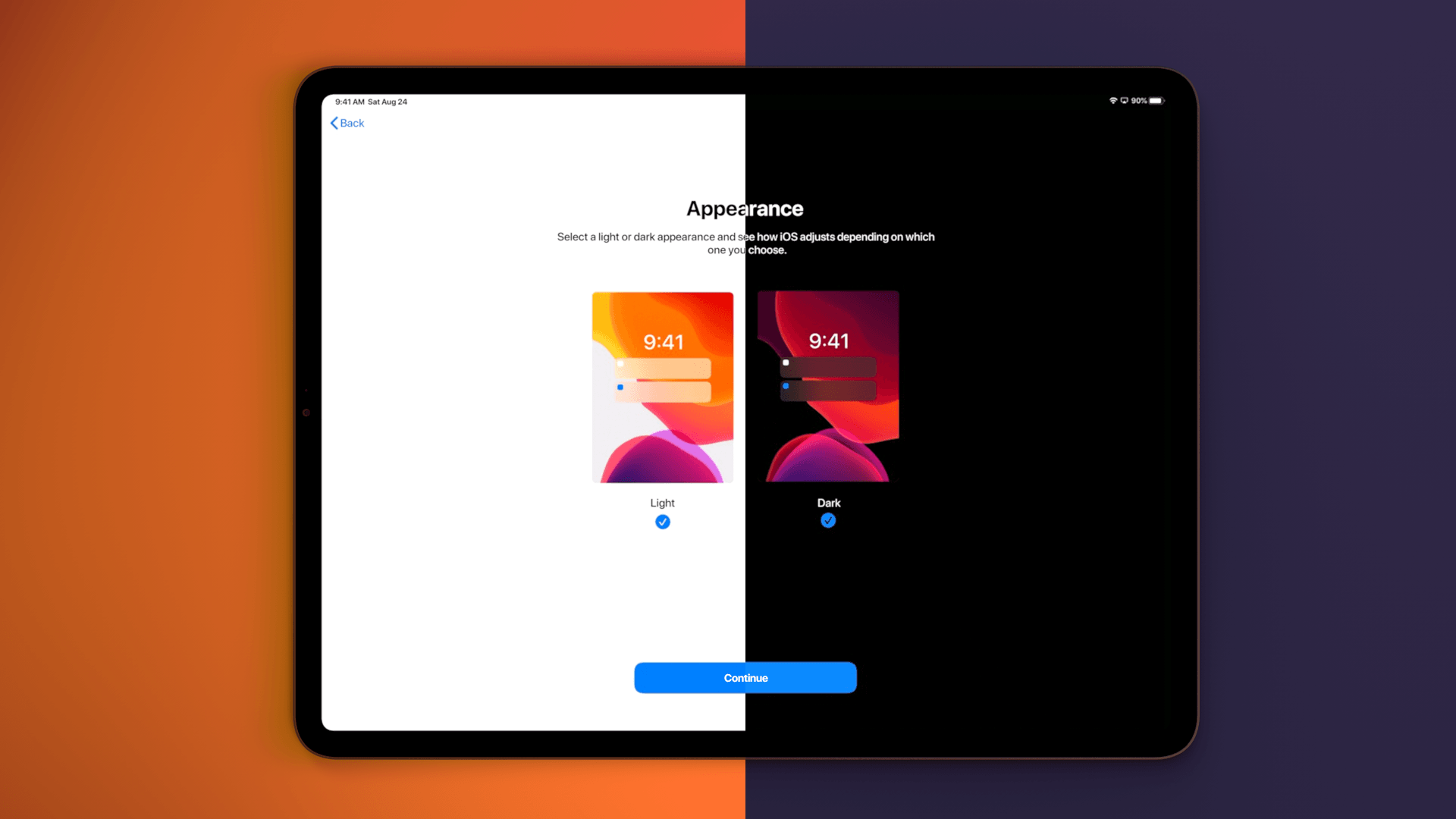 As I’ve noted on MacStories and shared on my podcasts over the past year, it is my understanding that one of Apple’s priorities in iOS 12 was to provide devices that had made the cut in iOS 11’s 64-bit transition with one last reliable software update. The company didn’t publicly admit this; perhaps in hindsight the multiple mentions of features that had been tested on an iPhone 6 Plus should have been a telling sign. For those devices, iOS 12 was the end of the line.

Screenshots throughout the story were captured on an iPhone XS Max and 2018 iPad Pro 12.9” running iOS and iPadOS 13.1, respectively. In most cases, from a design standpoint, there are no meaningful differences between iOS 13.0 and iOS 13.1; where appropriate, I’ve detailed which features or fixes will be coming in iOS 13.1.

iOS 13 formalizes what Apple somewhat implied last year by dropping support for devices released between 2013 and 2014. This means the original iPad Air, iPad mini 2 and 3, and 6th generation iPod touch are out; on the iPhone side, 2013’s iPhone 5s will not receive iOS 13, nor will the problematic (for developers, given its memory constraints) iPhone 6 Plus, or iPhone 6. Thus, the lineup of pre-2019 iPhones, iPods, and iPads that can be updated to iOS 13 is the following:

There’s little about iOS 13’s higher requirements that merits comment: by now, we’re used to seeing Apple raise the threshold every couple of years; iOS 13 follows the company’s trend of supporting iPhones and iPads with at least four years of free software updates. Owners of the discontinued iPad Air 2, which launched in October 2014 featuring an A8X SoC, will be able to update their device to iOS 13; the iPad mini 4, which came out in September 2015 carrying the less powerful Apple A8 chip, will also be eligible for iOS 13.

As always though, older devices may not be compatible with certain system features designed for more capable modern hardware. In this case, neither the iPad Air 2 nor iPad mini 4 will gain access to Animoji and Memoji stickers, new keyboard functionalities of iOS 13 that require an Apple A9 SoC and above. Additionally, ARKit 3’s people occlusion, motion capture, and multiple face tracking features are exclusive to the following devices:

Let’s start with the promises that can’t be immediately measured, and which we’ll have to trust Apple to deliver in the near future. According to the company, starting this fall apps from the App Store will be packaged with a new technique that should result in up to 50% smaller downloads. Similarly, Apple says that app updates should be up to 60% smaller on average. It’s unclear at this point whether Apple has further optimized their existing app thinning technologies, used a new compression engine for App Store binaries, or relied on something else entirely. It’s possible that these numbers may simply be a calculation derived from not having to embed Swift standard libraries into apps anymore thanks to ABI stability. I was unable to evaluate these app savings during the iOS 13 beta season as developers couldn’t push apps built with the iOS 13 SDK to the App Store yet. However, if Apple’s promises hold up, we should soon see a considerable reduction in the size of app downloads, which will help users with capped data plans as well as owners of devices with limited local storage. I assume the repercussions of these optimizations will be most evident on older devices without hundreds of GBs worth of free local storage.

According to Apple, a secondary effect of smaller app packages will be the increased speed of app launching. Because the system will be tasked with loading fewer resources upfront when launching an app for the first time, Apple claims that launching apps in iOS and iPadOS 13 will be up to 50% faster than before. Again, factual evidence on these improvements has yet to be gathered. I have some anecdotal evidence based on cold-launching built-in Apple apps on my iPhone XS Max test units running iOS 12 and iOS 13: apps on the latest OS appeared to be ready more quickly than their iOS 12 counterparts, but I’d rather wait for third-party developers to release their iOS 13 apps before calling Apple’s initiative a success.1

As for Face ID: the company hasn’t divulged any specifics on this, but their claim that Face ID unlocking should be up to 30% faster on all devices that support it (including the iPhone X and XR) thanks to iOS 13 has been backed up by my tests.

I’ve been using an iPhone XS Max running iOS 12 and another XS Max with the iOS 13 beta for the entire summer. Early on in the beta phase, it was clear that Face ID had been considerably improved in iOS 13, resulting in a faster unlocking process on the Lock screen. Even the animation of the padlock icon on the Lock screen is faster in iOS 13. You may think that a 30% speed increase is not a huge bump; in practice, the difference can be felt. By virtue of being faster, Face ID also feels more reliable than before, and therefore more naturally integrated with the hardware.

In the couple of years I’ve used Face ID on my iPhone X and XS Max, I’ve occasionally found myself longing for the days of Touch ID and its near-instant unlock on the Lock screen. I like Face ID, but I’ve always been aware of how I was trading some of Touch ID’s speed for Face ID’s futuristic, hands-free approach. I wouldn’t say that Face ID in iOS 13 is as fast as the golden days of the second-generation Touch ID sensor, but it’s very close now, and I haven’t thought about Touch ID once while using iOS 13 this summer.

Even more impressive is how Apple was able to improve Face ID exclusively via a software update, which makes you wonder how much faster it might still become with a new sensor in updated hardware. We’re closer than ever to the ideal of permanent ambient unlocking with no latency, and Apple’s getting there by optimizing the software that powers Face ID.

Back at WWDC, Apple mentioned its plan to bring a variety of other performance improvements to iOS 13, including: a more efficient shared cache system as well as cached system state; optimized background processes and a new BackgroundTasks framework for developers to tap into; reduced memory usage on Super Retina Displays (Apple’s parlance for the OLED displays in the iPhone X, XS, and 11 Pro); optimizations to FairPlay decryption (for DRM’d content). 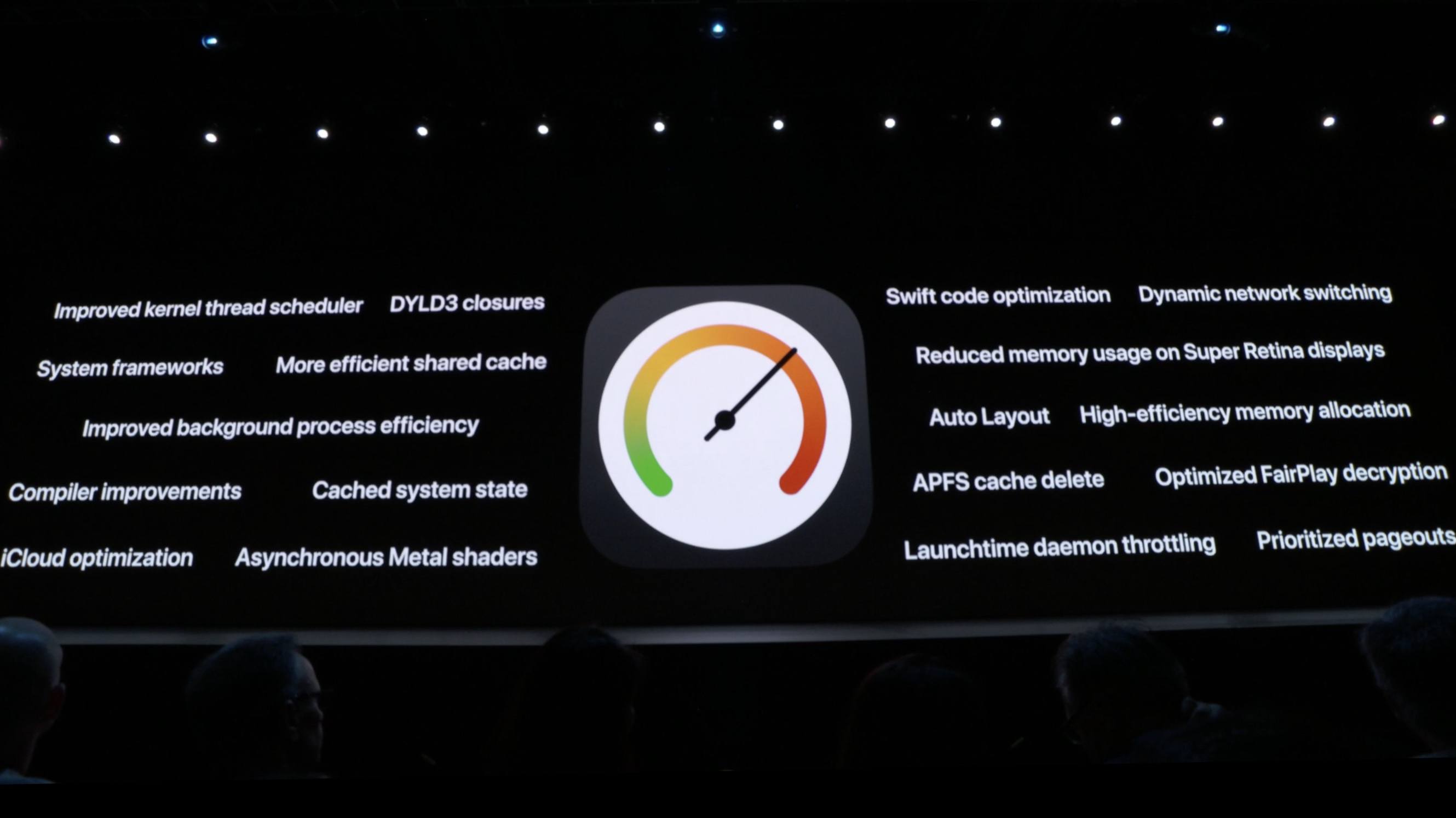 Unfortunately, in practice, it’s hard to tell whether any of these improvements made it into the first version of iOS 13, or what their impact on performance should have been. In my experience, following a notoriously rocky beta season, other aspects of the iOS 13.0 experience have fallen short of matching iOS 12’s stability and overall performance.

The first version of iOS 13.0 launching to the public today isn’t as polished or stable as the first version of iOS 12. In my tests, alongside the occasional SpringBoard crash, I experienced different types of glitches or slowdowns – from the Files app taking too long to display documents in a folder to the copy and paste menu failing to show me all options for selected text or Notes’ sync process hanging until the app was force-quit. It doesn’t help that features Apple initially promised as part of iOS 13, and which were available during the beta, were pulled from this first version and postponed until iOS 13.1. I get the sense that some of iOS 13’s instability may have been caused by the removal of functionalities that were supposed to be here today, but I may be wrong.

The first version of iOS 13 is by no means a “disaster”, as some have suggested on Twitter and other tech publications recently. But it’s not as tight or optimized as iOS 12 was at launch either. And maybe that’s the problem: performance and stability were a top priority for iOS 12 last year, and Apple treated them like actual features that deserved their full, undivided attention. iOS 12 spoiled us, but it seems that the same process can’t be repeated two years in a row. Hopefully, Apple will be able to rectify iOS 13’s stability shortcomings with iOS 13.1 and subsequent updates.

In terms of setup process, iOS 13 is another iteration on the slimmed down on-boarding flow that Apple revamped in iOS 11. 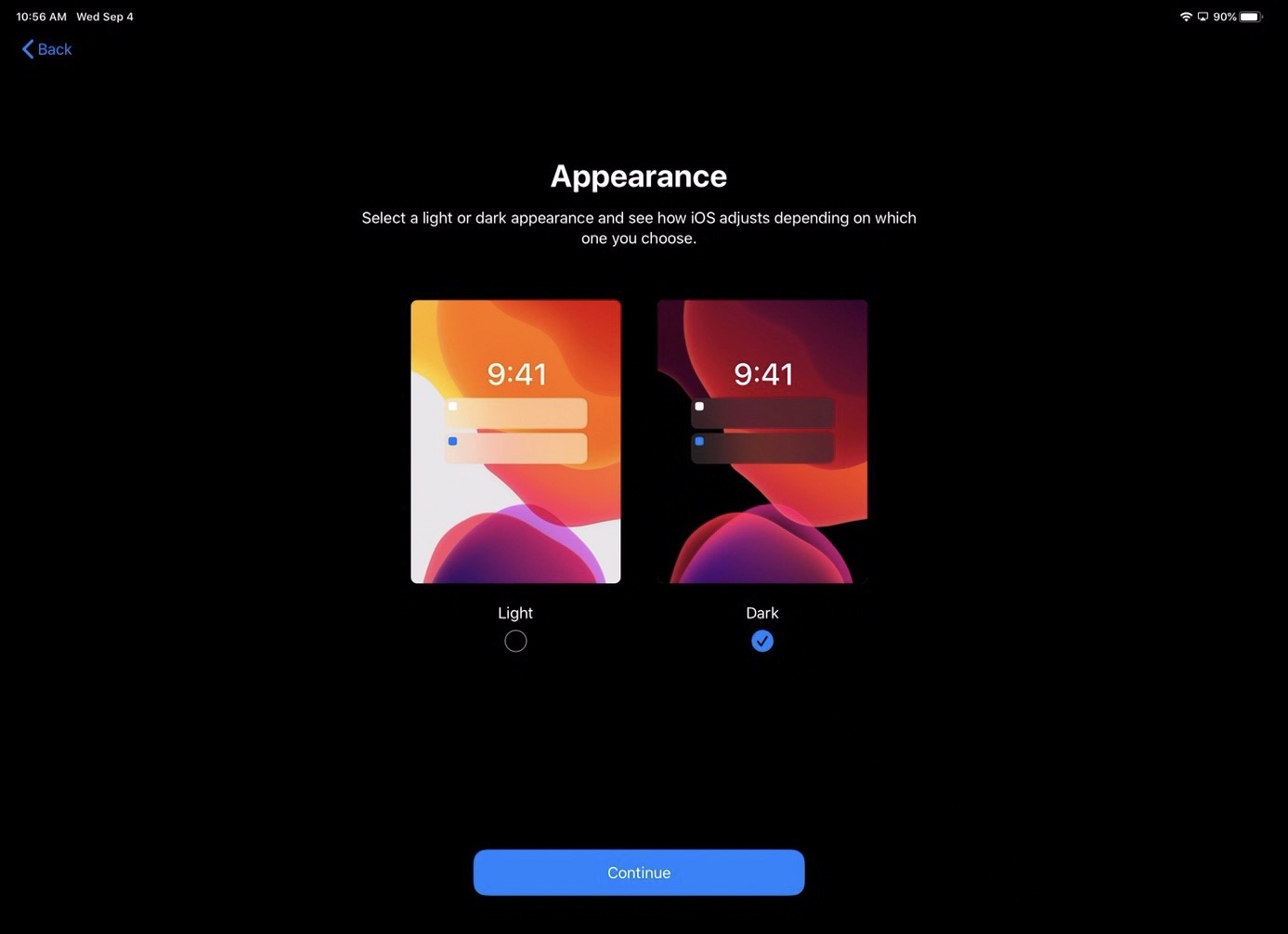 Obligatory screens explaining new system features such as dark mode (which can be enabled during setup) are the only change in iOS 13: extended data migration tools were introduced in iOS 12.4; there’s nothing else iOS 13 offers besides minor tweaks to descriptions and a page to test and preview dark mode. At some point, it would be nice to have more granular controls over which apps to restore from a backup, and in which order, during the setup process. Maybe next year.