Relaunching iOS for iPad as iPadOS must have been a careful balancing act for Apple. Redesign the OS too much, and you face the risk of alienating existing users; keep the status quo, and the rebrand may feel unmotivated, if not unnecessary. Apple largely succeeded in their effort: iPadOS 13 continues the trajectory of iOS 9 and iOS 11, but it does so with the newfound confidence of knowing that users demand the iPad go beyond the standard assumptions of a tablet.

You can still use an iPad like a “regular iPad” in iPadOS 13. You don’t have to learn the intricacies of multiwindow or connect a mouse to keep enjoying your classic iPad experience. Despite some missteps, Apple’s done a good job at introducing new complexity that only power users will stumble upon, relying on progressive disclosure to ease users into uncharted territories of the iPad experience such as managing multiple windows.

More than ever before, if you know how to operate the new tools at your disposal, using an iPad can now feel like a crossover between a tablet and a laptop – a computer with many of the same capabilities of a traditional laptop, but reimagined and redesigned for touch.

That’s exactly what I’ve been doing in the past three months since I installed the first beta of iPadOS in June. This review itself was entirely researched, written, and edited on an iPad Pro with iPadOS 13 and a combination of apps that offered multiwindowing capabilities. I usually kept at least three Notes windows open: in the research stage, one of them was paired with MindNode so I could transfer my notes to a map; another was combined with Google Docs in Safari to create my “podcast show notes” workspace; a third one was left open for general purpose note-taking. When I started writing the review in July using Drafts, I took advantage of the app’s multiwindow support to have one window for the latest chapter I was working on, and another open so I could read or manage my other chapters.

Working with multiple apps in Slide Over was essential to finishing the project on time: with Scriptable and Shortcuts always running in Slide Over, I was able to create advanced shortcuts that let those apps communicate with each other and perform tasks (such as uploading screenshots) within the context of Slide Over, without ever interrupting my Split View writing space. The ability to create Reminders windows dedicated to the ‘iOS Review’ project added a lot of flexibility to my workflow, but it also made me wish for the ability to create favorite and permanent workspaces, as I mentioned above. 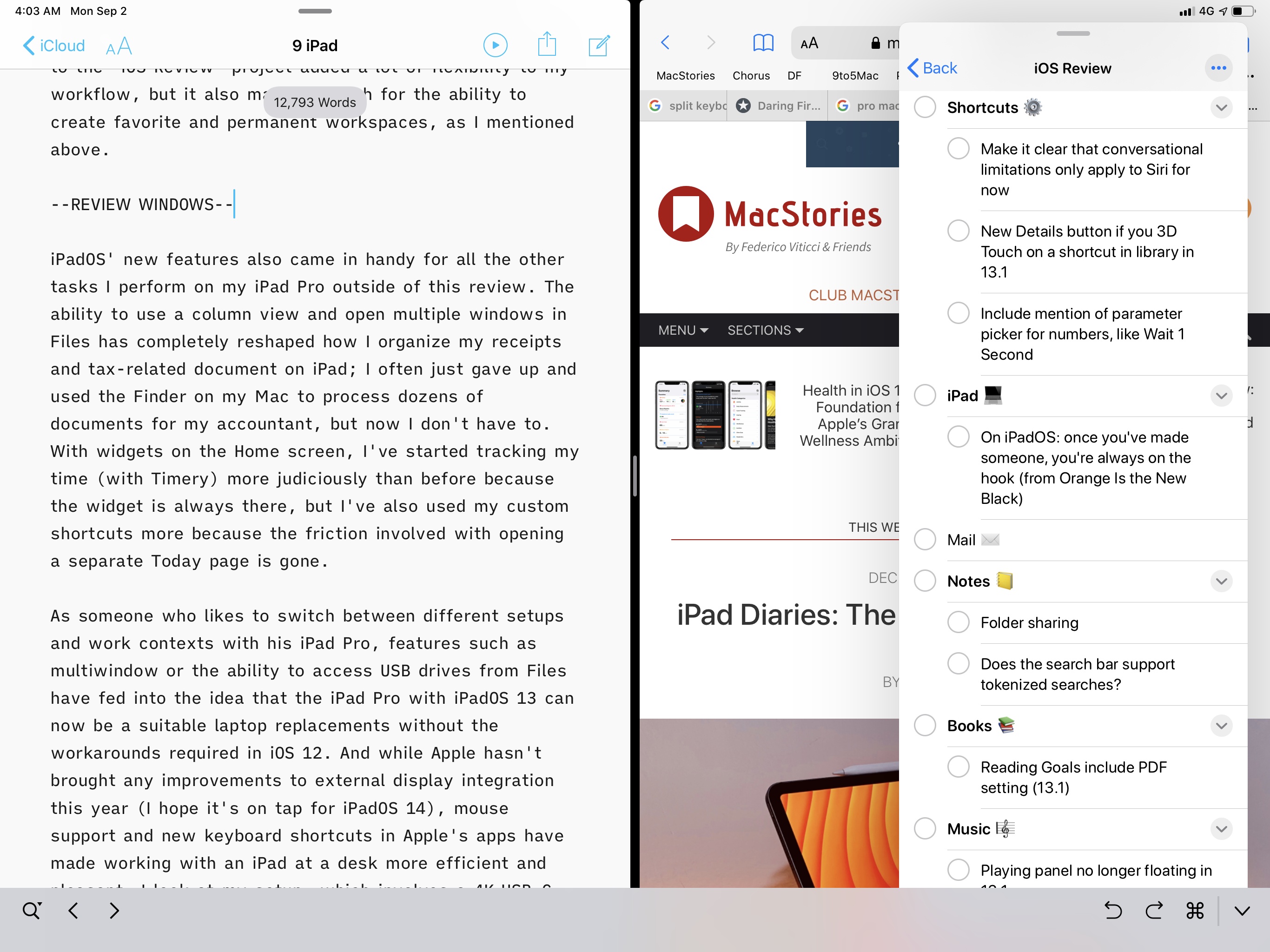 My typical editing setup for the review. 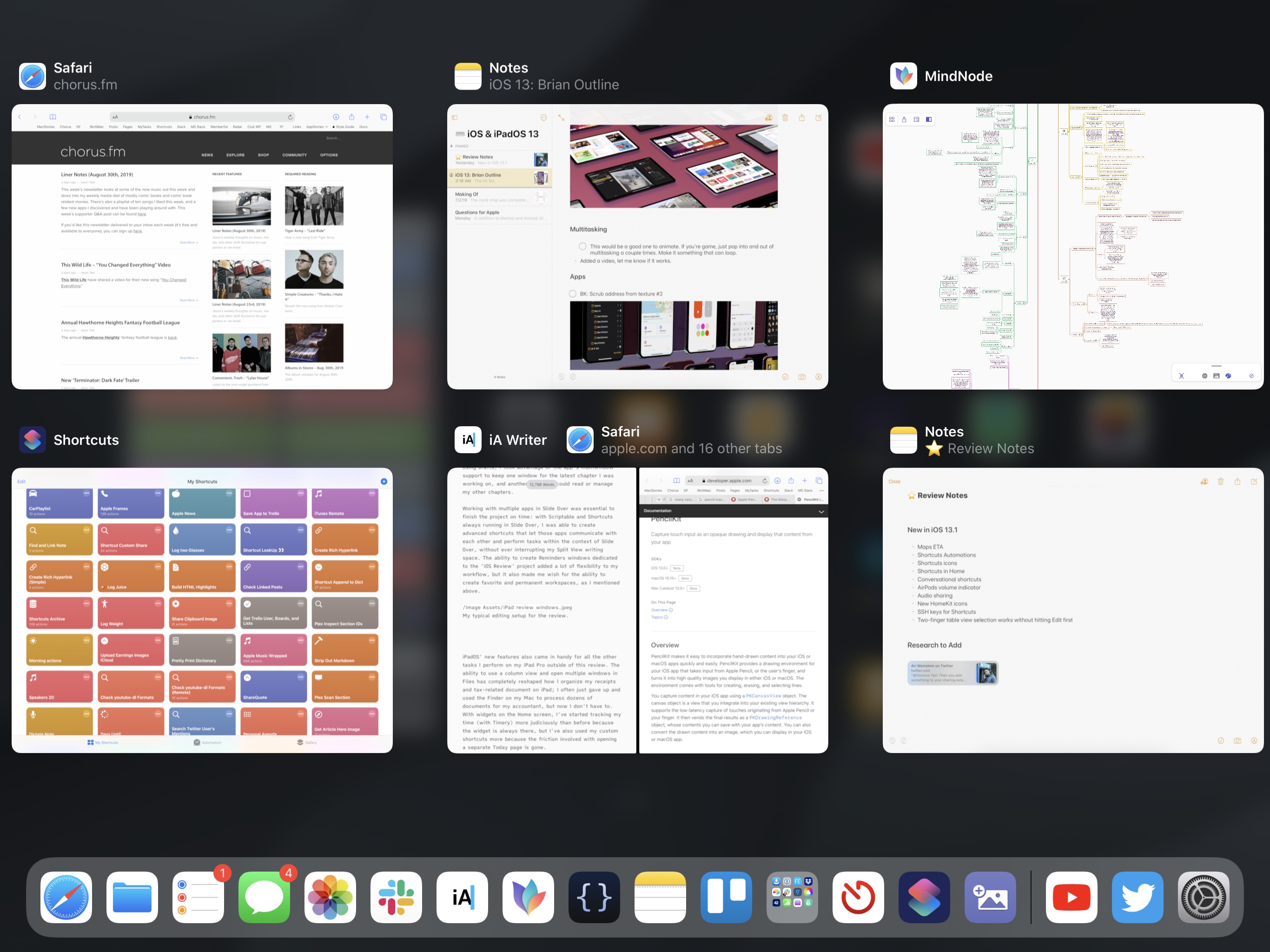 iPadOS’ new features also came in handy for all the other tasks I perform on my iPad Pro outside of this review. The ability to use a column view and open multiple windows in Files has completely reshaped how I organize my receipts and tax-related documents on iPad; I often just gave up and used the Finder on my Mac to process dozens of documents for my accountant, but now I don’t have to. With widgets on the Home screen, I’ve started tracking my time more judiciously than before because the Timery widget is always there, but I’ve also used my custom widget shortcuts more since the friction involved with opening a separate Today page is gone.

As someone who likes to switch between different setups and work contexts, features such as multiwindow or the ability to access USB drives from Files confirm that the iPad Pro with iPadOS 13 can be an exceptional laptop replacement without the workarounds required in years past. And while Apple hasn’t brought any improvements to external display integration this year (I hope it’s on tap for iPadOS 14), mouse support and new keyboard shortcuts in Apple’s apps have made working with an iPad at a desk more efficient and pleasant. I look at my setup, which involves a 4K USB-C display, a Magic Keyboard, and an MX Master 2S mouse, and I think it’s incredible how, with a single USB-C cable, all of these accessories can now be used either with a Mac mini or a 2018 iPad Pro.

The iPad Pro with iPadOS 13 can be an exceptional laptop replacement.

It takes a while to get used to iPadOS 13, particularly its multiwindow capabilities; after three months, I think I’m still adapting to them as well. Ultimately, adoption of multiwindow – along with desktop-class Safari, the marquee feature of iPadOS 13 – comes down to third-party developers, and I’m keen to see how quickly my favorite iPad apps will add support for opening multiple windows. For iPadOS 13 to succeed in professional environments, which is arguably what Apple wants from this update, developers will have to take Apple’s vision and run with it.

At this point, I don’t know if rebranding iOS as iPadOS means Apple will devote attention to the platform on a regular basis. Only time will gift us with that absolute certainty. But I know this: years from now, if Apple’s plan is successful, we’ll likely look back at iPadOS’ debut as an inevitable building block for the iPad’s future. Because in iPadOS lies more than a shiny new name: it’s a redefinition of intent and an altogether new vision for the platform.

There’s never been a better time for iPad users to come along for the ride.