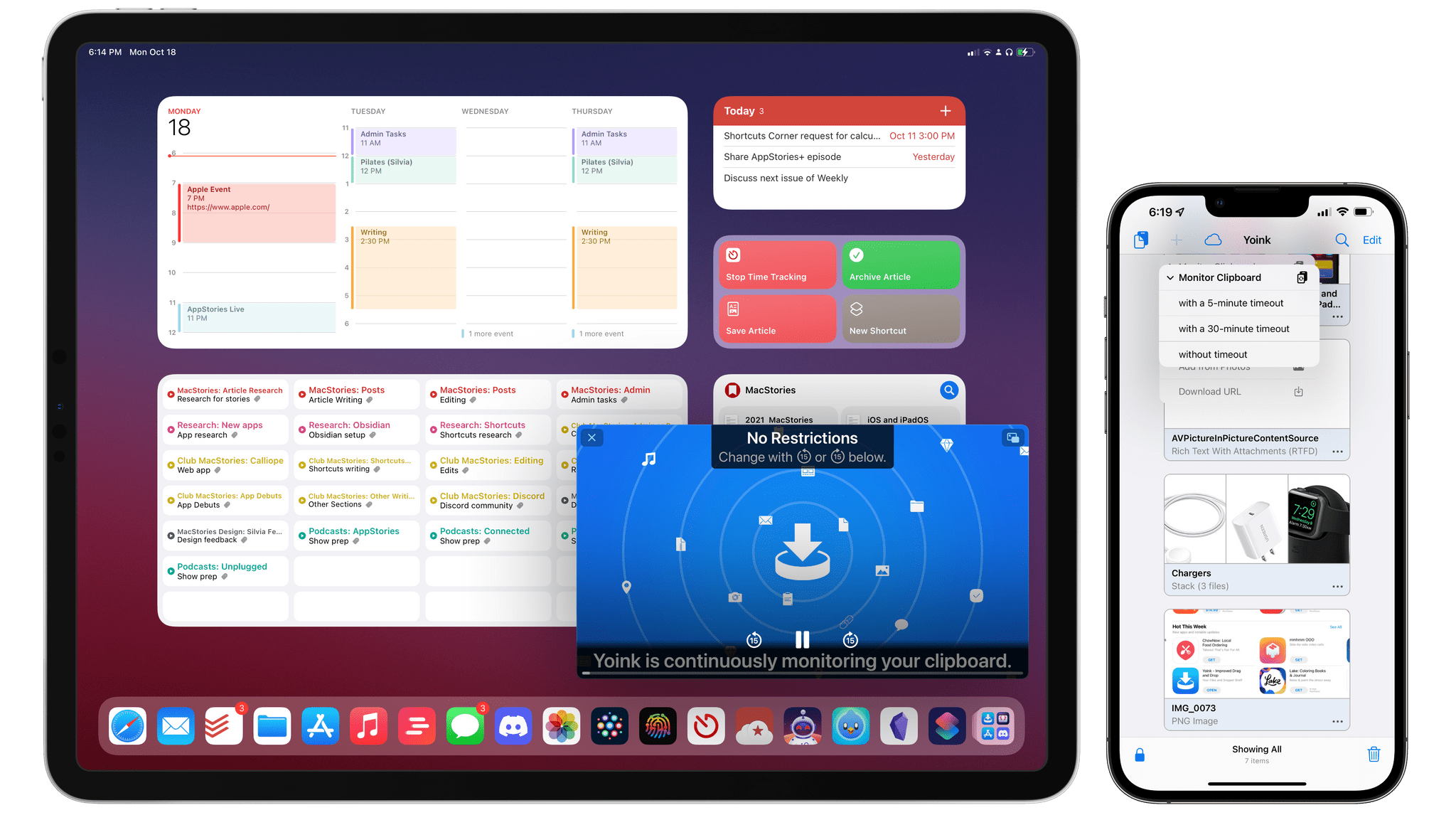 There is a long history to third-party developers trying all sorts of workarounds to circumvent the limitations imposed by Apple on clipboard managers.

Several years ago back when Pastebot was also available on iPhone, Tapbots attempted to let it run persistently in the background by playing a silent audio track that would trick iOS into not suspending Pastebot when it was closed. The feature was promptly shut down by Apple.

Unable to devise other methods to let apps run in the background without interruptions, developers of clipboard managers then converged on the same idea: using old-school Today widgets to capture the contents of the clipboard as soon as the user opened the Today page. We’ve seen different permutations of this feature in apps such as Clips, Copied, Paste, and other clipboard managers that have come and gone over the years. I’ve never been a fan of this method: if I have to remember to stop what I’m doing and open the Today page for a chance at capturing what’s in my clipboard, I might as well just open the clipboard manager manually, paste it myself, and rest assured I’ve archived whatever is in my clipboard.

The truth is that clipboard managers for iPhone and iPad have never been as reliable and seamless as their Mac counterparts, which explains why searching for ‘clipboard manager’ on the App Store reveals a wasteland of abandonware these days. Without a reliable API and officially sanctioned framework to make apps run uninterrupted in the background and capture the contents of the clipboard, this category of apps must have felt like a market that Apple just didn’t want to exist on iOS and iPadOS.

I resisted the temptation of writing about Yoink’s genius implementation of clipboard monitoring because I didn’t want to shine a spotlight on a feature that could (potentially) put the app at risk in case its update was approved by a reviewer who didn’t pay particular attention to it. But after I saw that Apple itself was promoting Yoink in apps ‘Hot This Week’ on the App Store, I knew it was game on.

Yoink’s persistent clipboard monitoring is a new spin on an old concept: it uses an audio/video trick to let the app run in the background and make iOS/iPadOS think it’s always in the foreground, capable of capturing your clipboard. Specifically, Yoink uses Apple’s Picture in Picture technology to remain active even if you close the app, monitor what you copy, and save it into the main Yoink app. Best of all, it does so with controls embedded in the Picture in Picture video overlay that even let you customize how Yoink checks for the contents of the clipboard.

First of all, it’s important to stress that Yoink’s persistent clipboard monitoring can only be manually activated by the user. By default, the app doesn’t monitor anything on its own; you always have to activate clipboard monitoring yourself by interacting with a menu that requires three taps. To enable clipboard monitoring, you have to press the ‘+’ button in Yoink’s main screen, tap ‘Monitor Clipboard’, then choose whether you want to do so with an automatic timeout or not. Your options include a 5- and 30-minute timeout or no timeout at all. Then, you have to press a big ‘Monitor Clipboard’ button again to confirm you want to activate the feature. 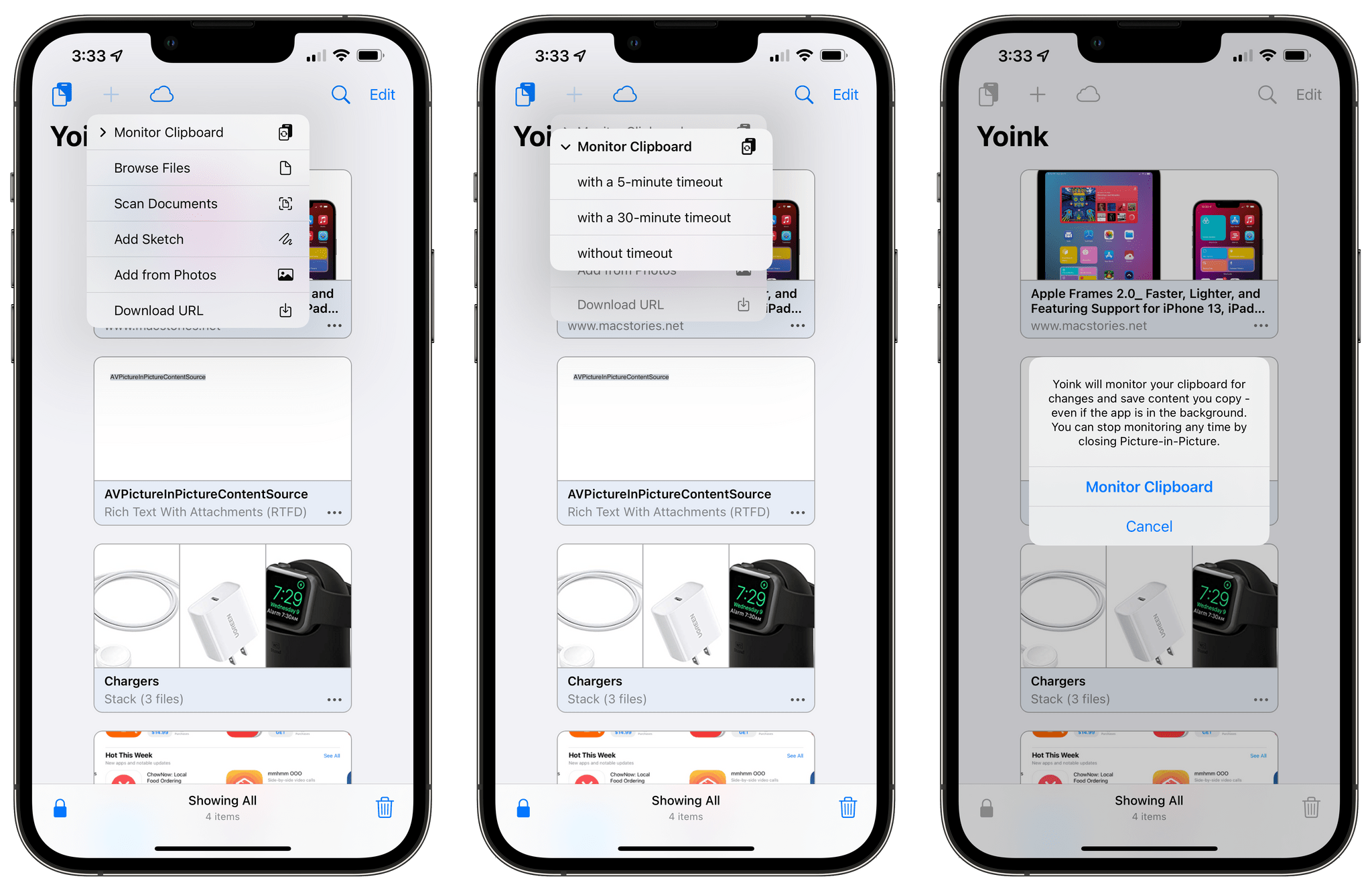 No matter the flavor of clipboard monitoring you pick, Yoink will then proceed to load a a custom Picture in Picture window showing a static image that tells you the app is monitoring your clipboard, and for which types of content it is doing so. At this point, you’re off to the races: you can make the Picture in Picture window as small as you want, perhaps even tuck it into a corner of the screen on your iPhone or iPad, then start copying anything you want in any app. As soon as you copy something, iOS and iPadOS will display the system’s built-in clipboard alert, and Yoink will save the contents of the clipboard into the main app, even if it’s not in the foreground, as long as its Picture in Picture “video” is “playing”. 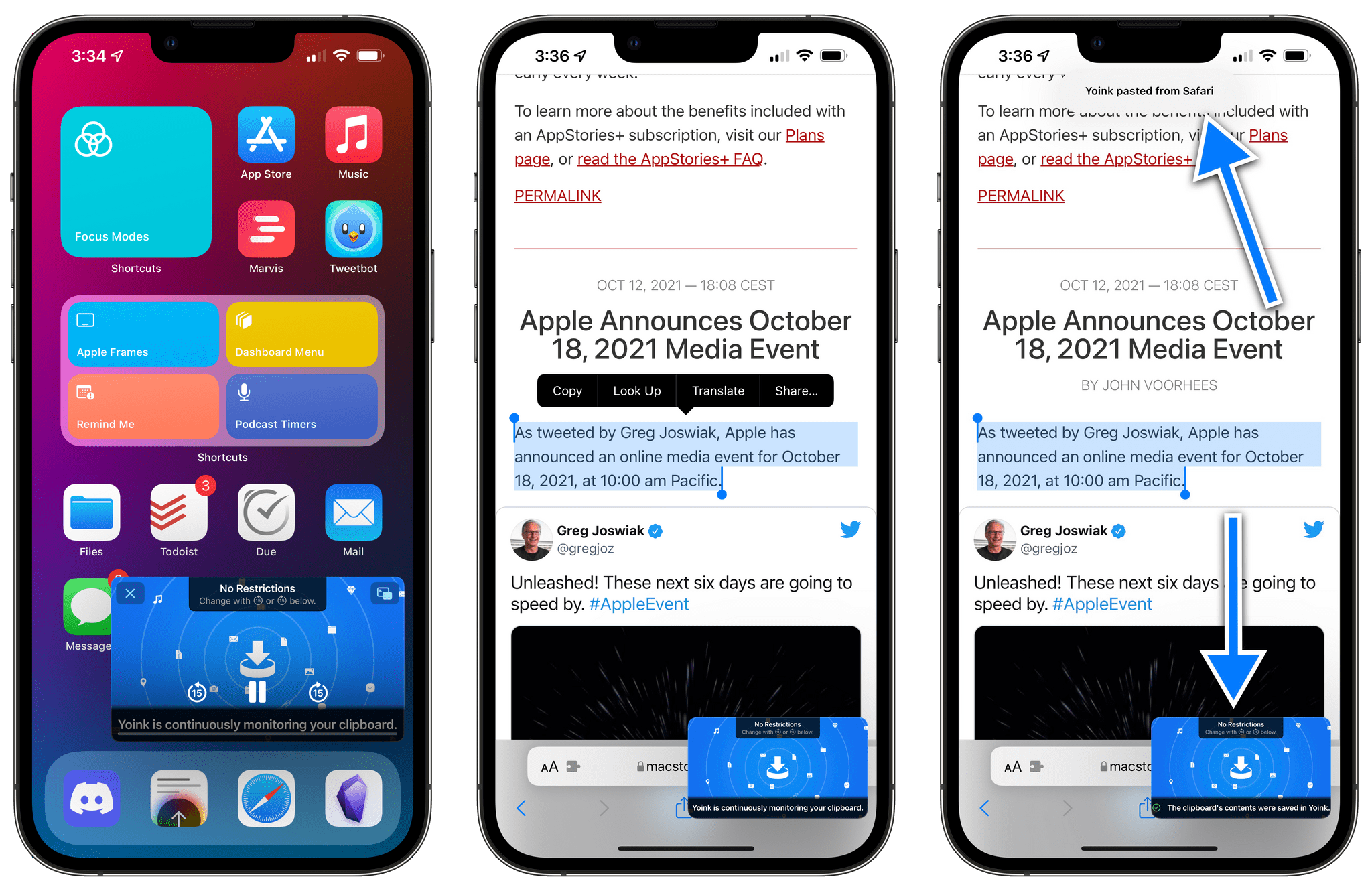 When Yoink’s Picture in Picture mode is active, everything you copy will be saved in Yoink running in the background.

You can let Yoink’s Picture in Picture run for several hours or even days (I’ve tested it), and the app will continuously monitor and save your clipboard as long as Picture in Picture is enabled. If you’ve ever found yourself having to copy and paste multiple things in a row on iPad and realizing how painful it was to do so without a proper clipboard manager, you know this is a big deal for the platform and a small revolution for iPad productivity, even if it’s powered by a workaround. 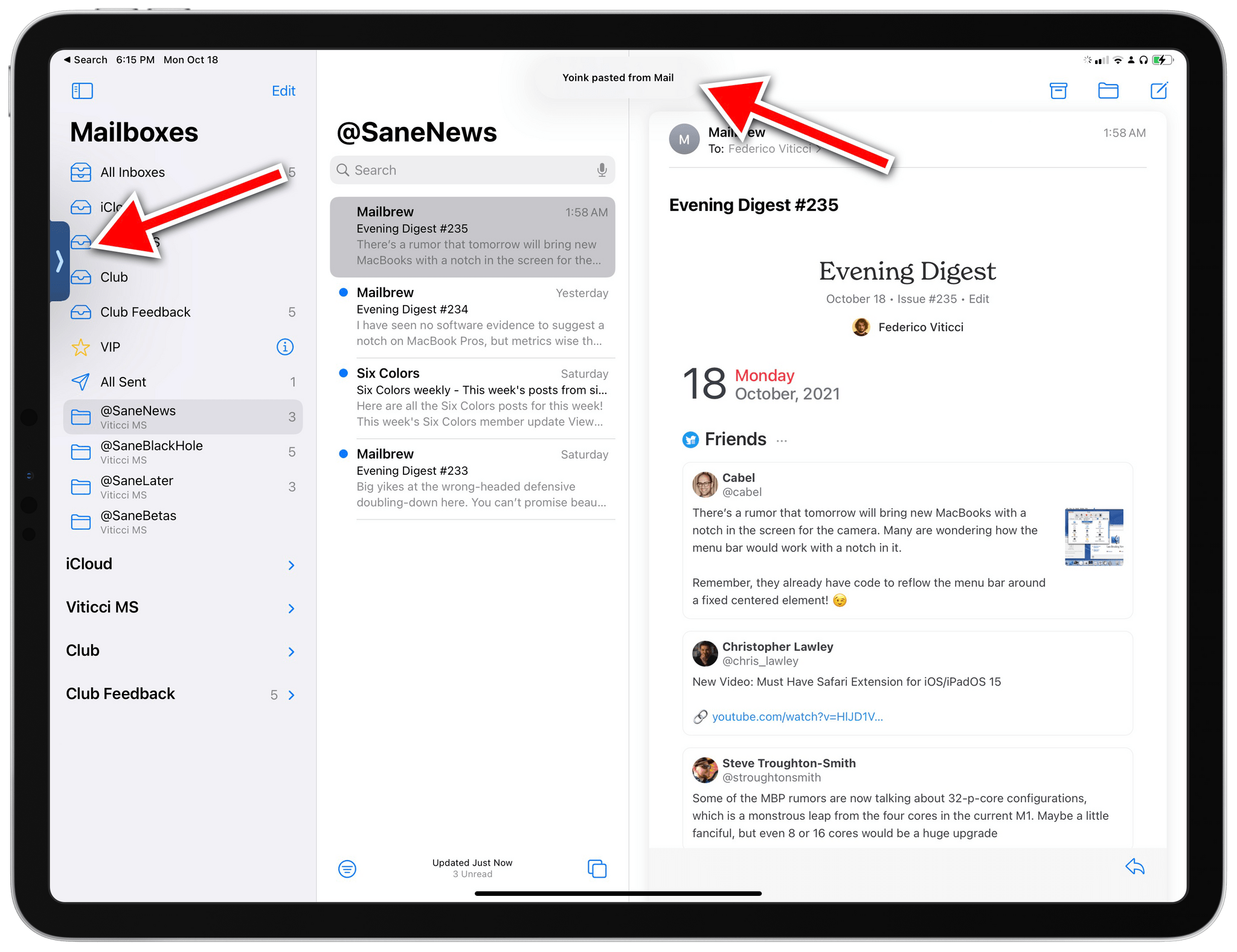 Even if you hide Picture in Picture, Yoink will continue to save the contents of the clipboard in the background.

The core of Gansrigler’s idea – and why I believe Yoink isn’t technically breaking any App Store rule – is a new API launched by Apple for apps that use Picture in Picture. 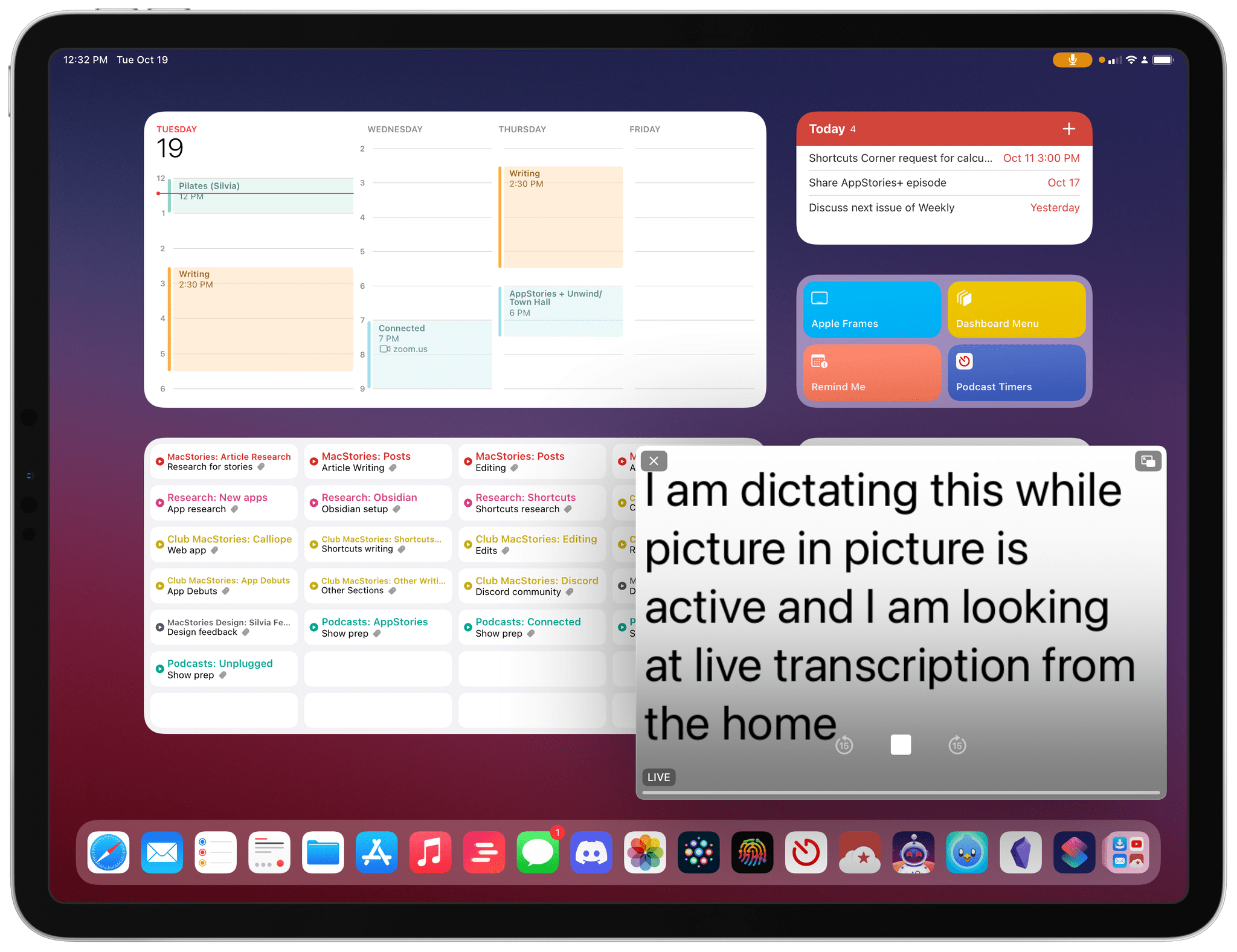 Real-time transcription in Picture in Picture thanks to new APIs in iOS and iPadOS 15. 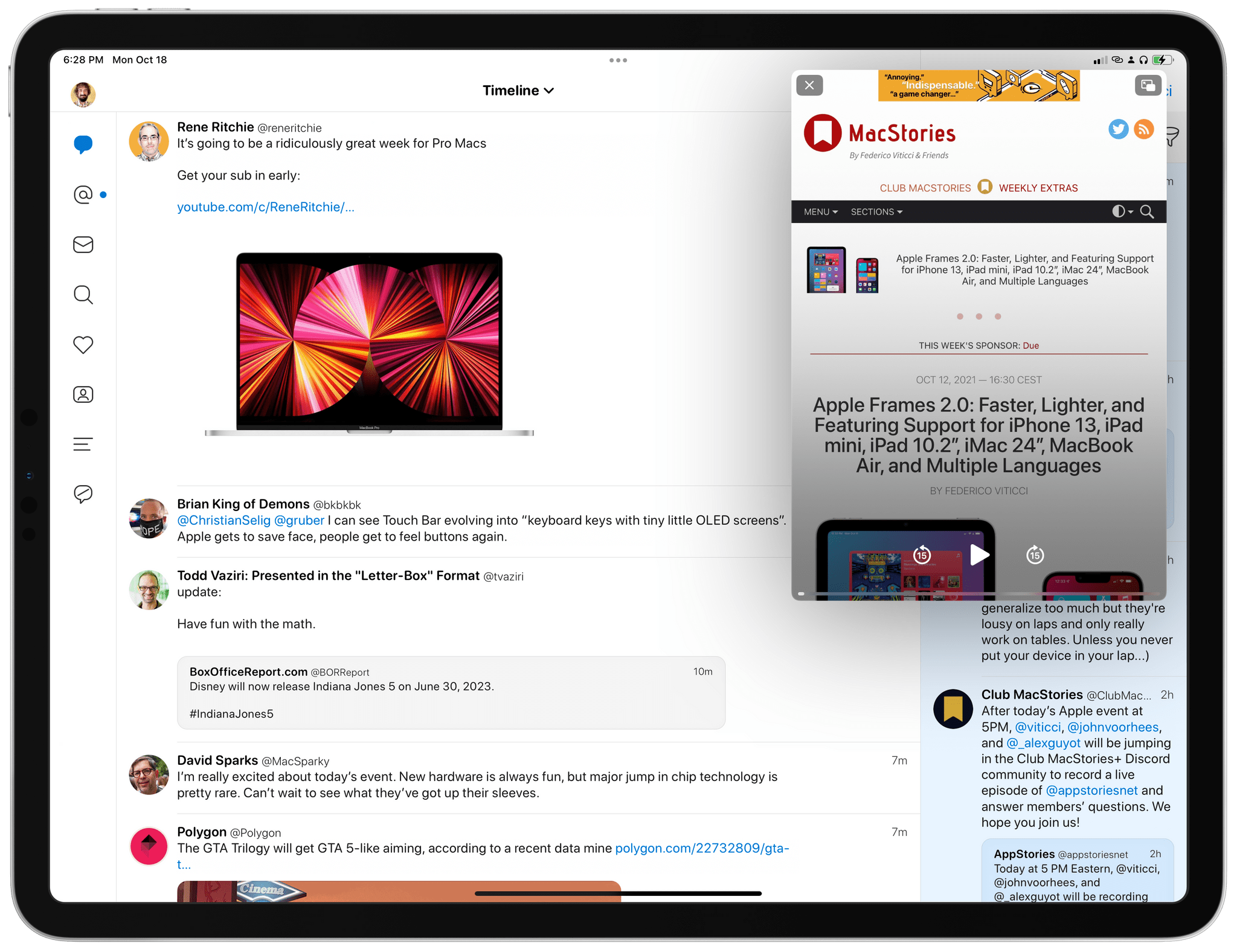 With clipboard monitoring, Gansrigler turned the API on its head and asked: what if Picture in Picture was used as a bridge between the system and Yoink, and the ability to show arbitrary content in it was leveraged to display a banner that tells users Yoink is monitoring the clipboard?

I shouldn’t be surprised that Gansrigler considered all the details of this implementation, but I still appreciated the small touches of clipboard monitoring in my tests. If you press the Pause button while Picture in Picture is active, the window will instantly dim and, well, pause clipboard monitoring until you hit Play again. 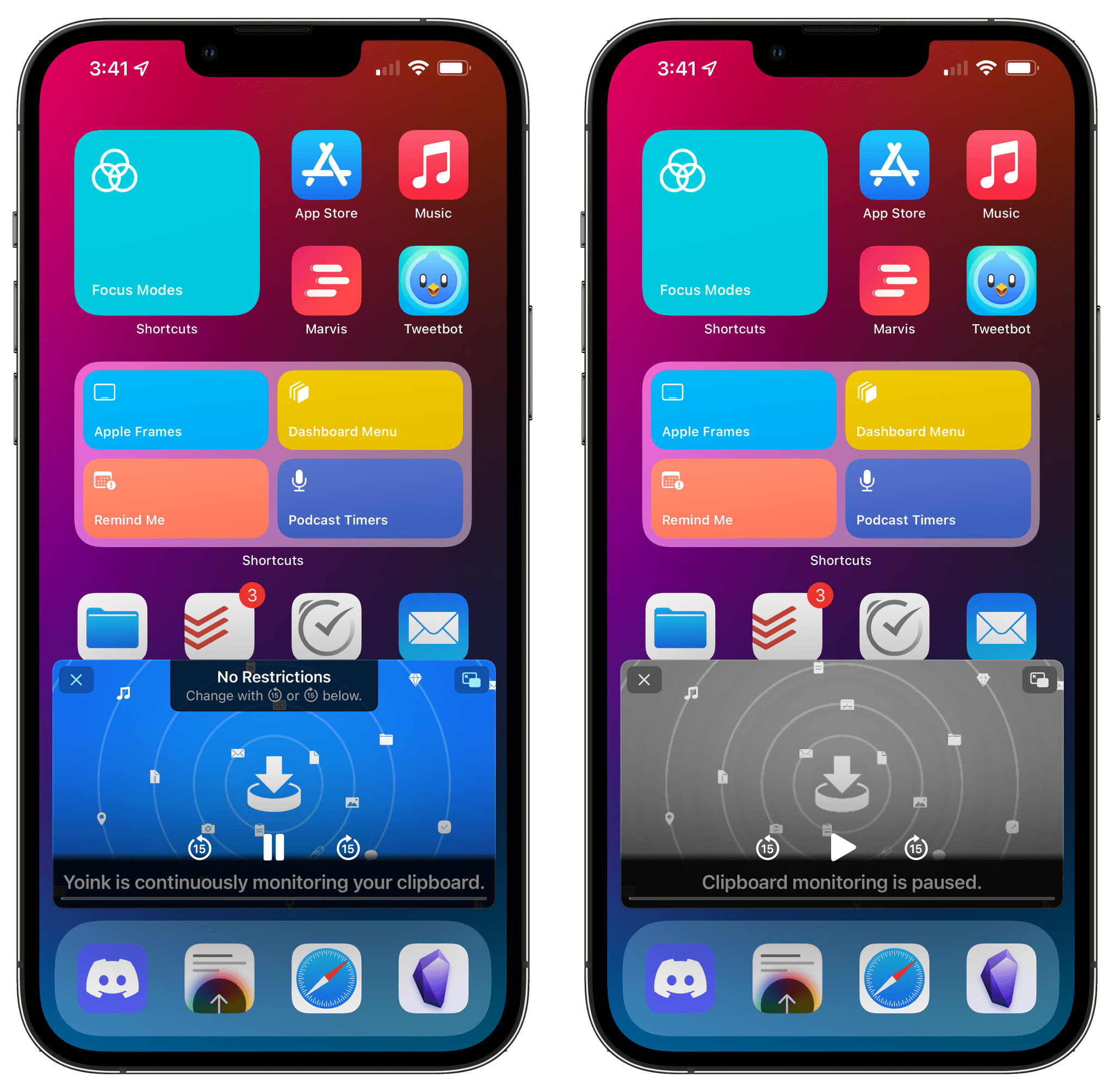 You can pause and resume clipboard monitoring at any time with the Play/Pause button.

You can even control the kinds of content Yoink should monitor and save while it’s running in the background. To do so, you can press the buttons in the Picture in Picture window to skip backwards and forwards in 15-second increments. These buttons let you cycle through options to monitor the clipboard without restrictions or only watch for images, URLs, or text. This option is perfect for all those times when you’re dealing with multiple apps at once, you’re copying different bits of content back and forth, but you only want to save specific items of a certain type in Yoink. 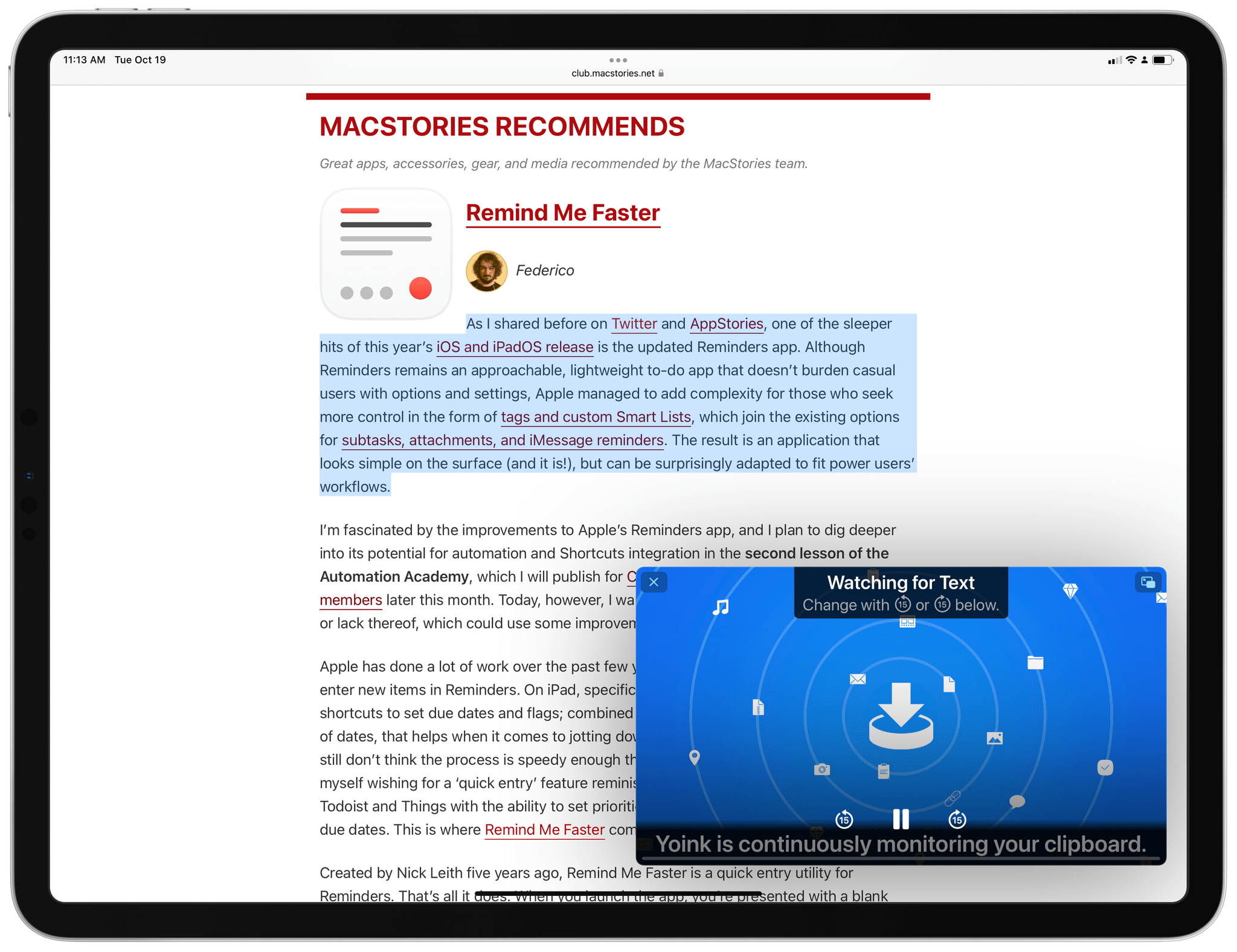 You can choose the kind of clipboard content Yoink should monitor in the background.

If you’re concerned about the privacy aspect of this, I want to reiterate how clipboard monitoring in Yoink is a mode you always have to manually activate, and which you can dismiss at any point by simply closing the Picture in Picture window. Additionally, Yoink will try to never save passwords and other sensible content by checking for pasteboard types; if developers of apps that deal with text strings such as passwords mark them up correctly, Yoink won’t save them when you copy them to your clipboard. Along these lines, I would have liked to see the ability to manually define a list of file UTIs I never want Yoink to save, plus an option to customize the default types you can cycle through inside the Picture in Picture window.

Speaking of missing features: at the moment, Yoink doesn’t feature any keyboard shortcuts or Shortcuts actions to quickly activate clipboard monitoring. I’d like to see both added as options in the future; particularly when it comes to Shortcuts integration, I could see how controlling the state of clipboard monitoring via native actions could be a terrific addition to iPad automation. 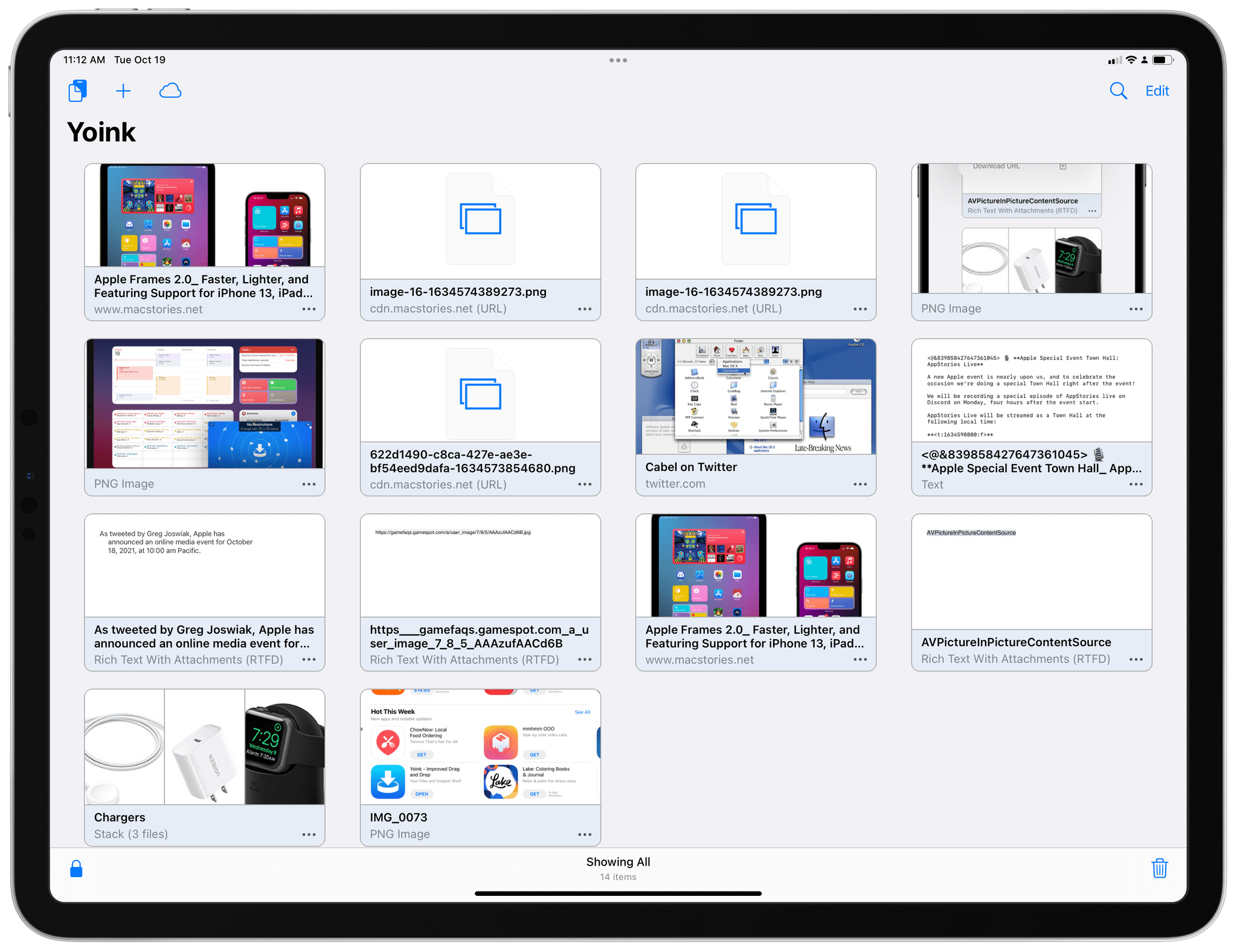 Items saved to Yoink in the background.

Perhaps Apple didn’t envision this kind of usage for Picture in Picture in iOS and iPadOS 15 when they added the ability for developers to display arbitrary content in it. Or maybe they did, and they knew someone would come up with a system to repurpose Picture in Picture as, effectively, a background process. Whatever the story behind this may be, persistent clipboard monitoring in Yoink is one of my favorite new app features in a while: it enables an all-new kind of clipboard workflow on iPad and iPhone – one that confirms how badly real clipboard managers are missing from iOS and iPadOS.

It’s ridiculous that we had to wait for a third-party developer to use Picture in Picture as a workaround for background clipboard monitoring on iPhone and iPad. But until Apple offers a native solution for power users who have always wanted clipboard managers on iOS and iPadOS, Yoink’s implementation is our best shot yet. We just have to hope this feature remains available until Apple offers something better.