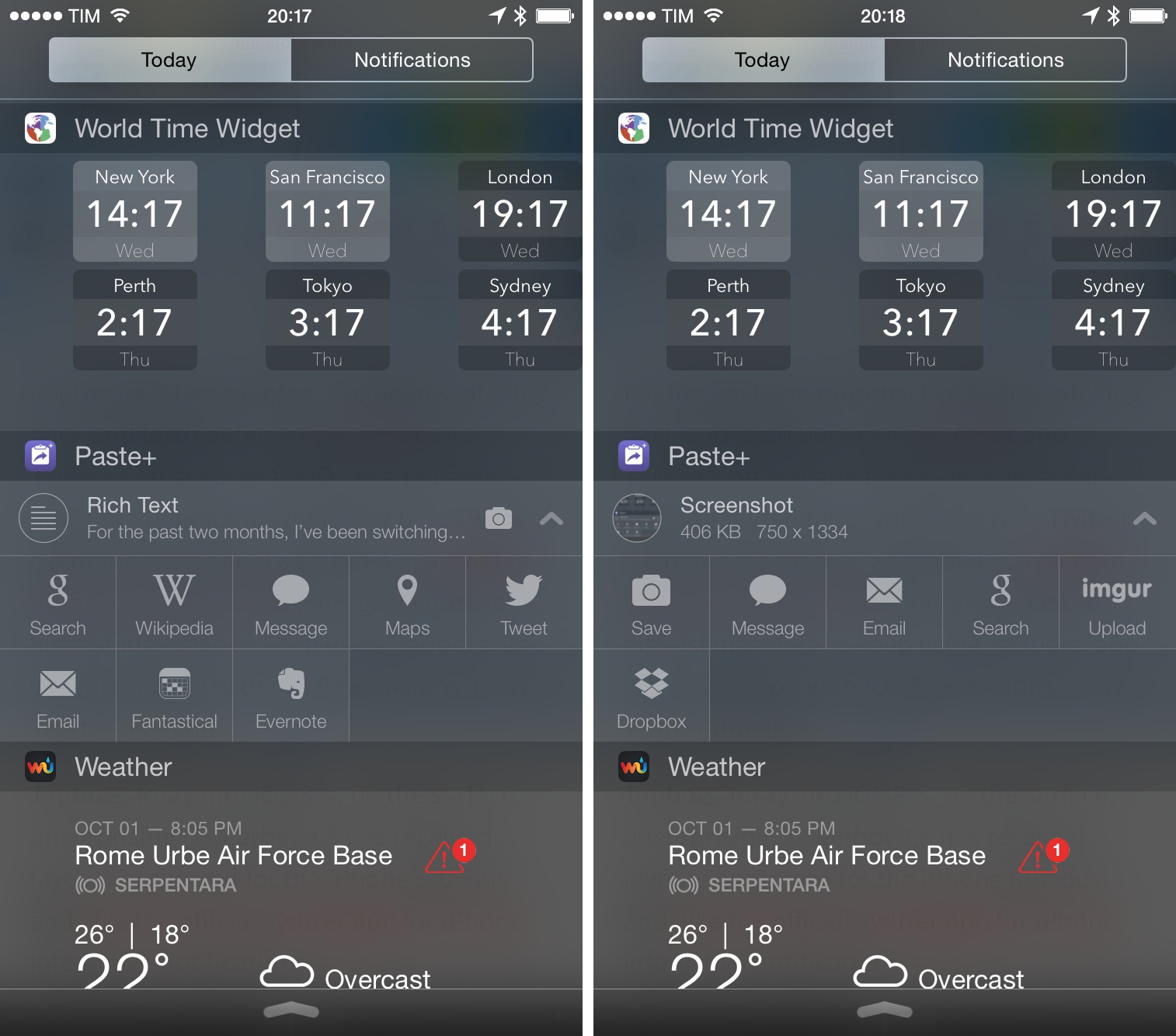 When iOS 8 launched three weeks ago, I came across a company called Avanio Labs that had launched a set of three apps on the App Store: Paste+, Agenda+, and Forecast+. The apps were presented as Notification Center widgets, and I found that interesting as I assumed that Apple would reject apps that only offered widgets with no primary functionality. Of Avanio’s three apps, I’ve been using Paste+ on a daily basis. I think it’s a nice little utility to save taps and launch specific iOS features faster with Notification Center.

Paste+ is a launcher for the iOS clipboard that lives in the Today view. It works with text you’ve copied and it can perform different actions directly from Notification Center. For example, you can send a link from your clipboard to Safari, share it via email or iMessage, or save it to Instapaper; if you copy text and open the Today view, Paste+ will let you search Google or Wikipedia for that bit of text, open it in Maps, or tweet it. To act on your clipboard with the Paste+ widget, simply tap on the clipboard preview and Paste+ will reveal a drawer with sharing options (which you need to configure in the app’s settings). Paste+ is, essentially, a clipboard action widget, but its simple appearance hides a powerful app with some great touches under the hood.

Paste+ works with both plain and rich text. The latter is especially impressive as it lets you share text that contains inline formatting and images. 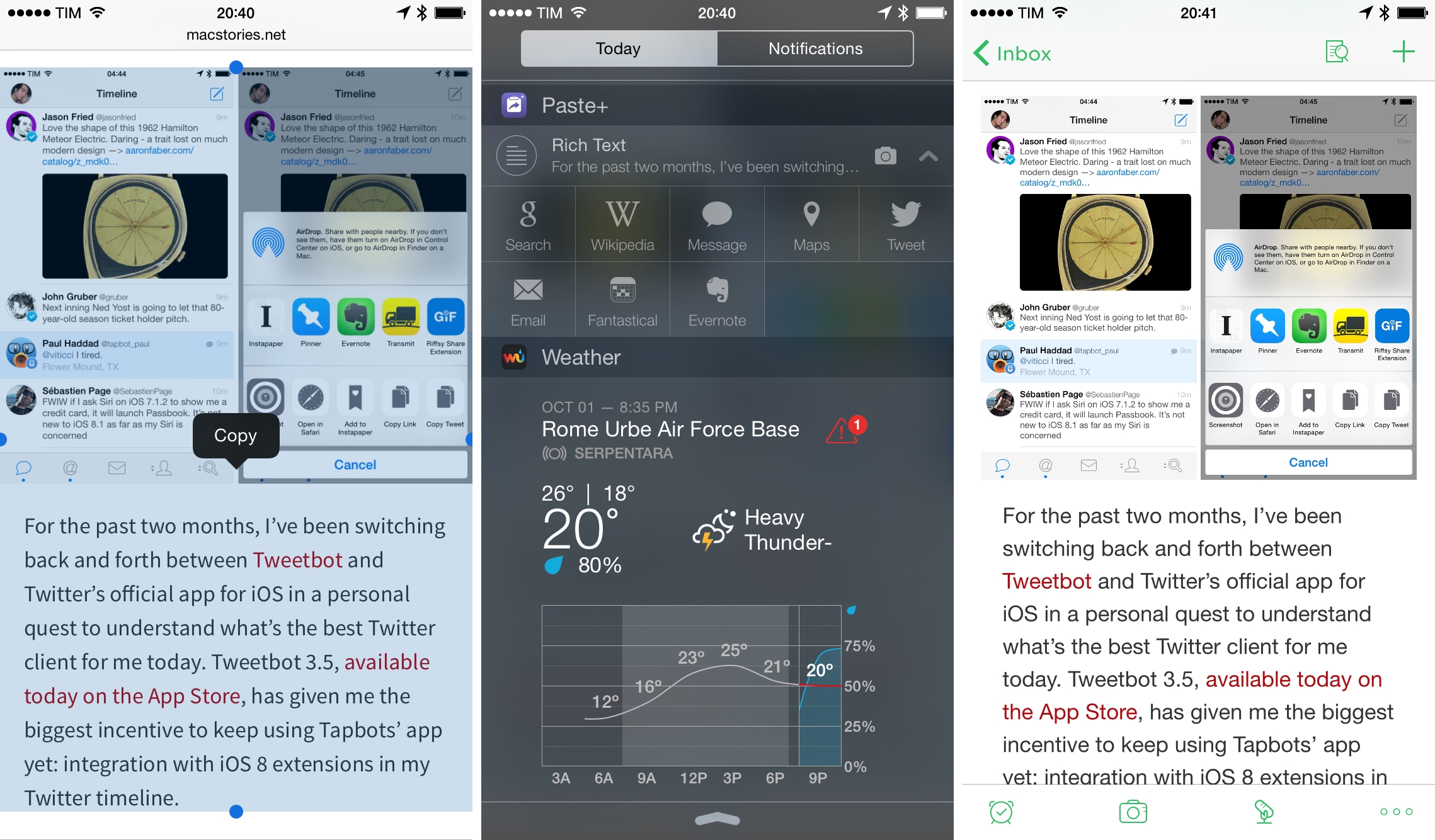 Clipping rich text from Safari to Evernote with Paste+

The best demonstration of the app’s rich text capabilities is Evernote, which can be added as a web service in the settings. Copy rich text in Safari, open the Today view, tap Evernote in the Paste+ widget and you’ll end up with a rich text note; copy rich text from an email message, and Paste+ will create an exact copy in your Evernote account without ever leaving Notification Center.

Unlike the Launcher app that Apple removed from the App Store, Paste+ doesn’t let you create your own app shortcuts with URL schemes. Instead, Avanio Labs built a predefined set of actions for text, links, and images that offer basic clipboard sharing features as well as some nifty third-party app integrations.

The Paste+ app acts as a dashboard for the widget’s settings: you can configure online accounts (Evernote, Dropbox, imgur, Instapaper, and more), enable native integrations such as Safari and Mail, or activate third-party apps. I was pleased to see support for Fantastical 2, Drafts, and WhatsApp, but Paste+ is far from the rich library of app actions found in Launch Center Pro and lack of URL schemes means you won’t be able to set up your own actions from scratch. 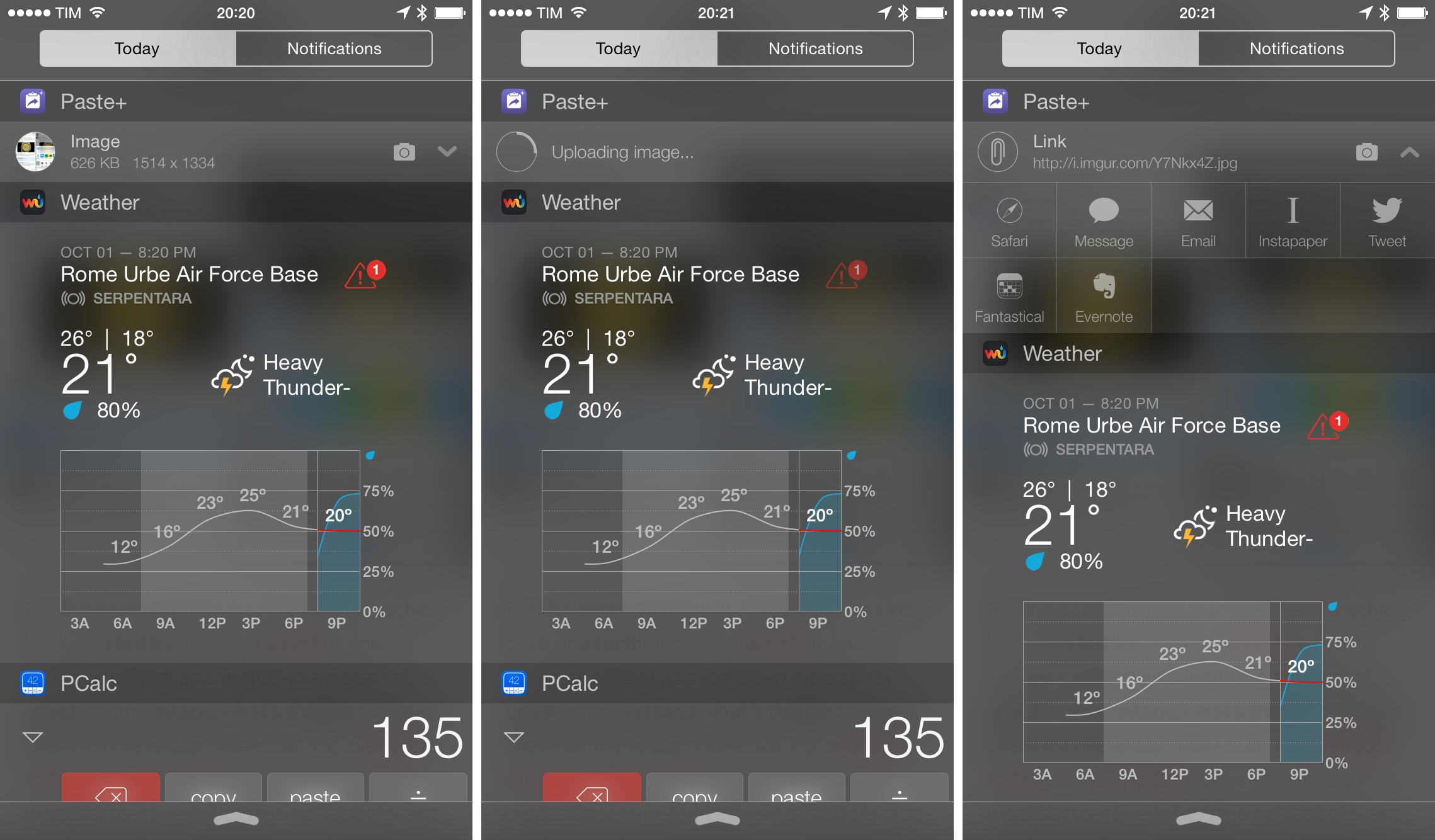 Surprisingly enough, Paste+ also supports sharing images you’ve copied in the clipboard or the last photo you’ve taken on your device. Using the widget, you can upload images to imgur and receive the shared URL back in your clipboard, which worked well in my tests. I have, however, run into issues with image uploads to Dropbox: Paste+ uploads the file to my account but it doesn’t return a URL. In general, uploading images from Notification Center with Paste+ is a nice idea, but the app is often unable to fetch images as they’re too large and their file size exceeds the memory limitations of the Today view.

I’ve been using Paste+ to quickly open links in Safari, launch Google searches for copied text, and archive bits of text to Evernote from apps that don’t support the Evernote extension. I wanted to use Paste+ to share images from the clipboard, but that aspect of the app needs work and the Today view may be too limiting for large photos and screenshots.

Paste+ is a useful widget to quickly share text and links, and I hope that it’ll continue to be available on the App Store. iOS 8 extensions have diminished the need to rely on app shortcuts and actions, but I still use the clipboard to move text across apps and I’m looking forward to more functionality in Paste+.

Paste+ is $3.99 on the App Store, and it’s also available in the Avanio Labs bundle.