Pastebot, the excellent clipboard / data management utility from Tapbots, has just been updated to version 1.4 which, among other things, adds support for the much requested clipboard in the background. How that works, however, is a little different from what the developers originally had in mind.

Due to Apple’s restrictions when it come to persistent processes running in the background, the app can’t keep on recording all the items you copy for an unlimited period of time: just like iOS 4’s APIs allow, background expiration is set to around 10 minutes. After that you’ll get a notification letting you know that the background process needs to be restarted by launching the app again. The local notification idea is great, and luckily enough is completely optional.

Pastebot 1.4 also adds a useful “send as text” feature for items in the clipboard (requires iOS 4), single tap for images in fullscreen, lots of bug fixes.

With its interoperability with the Mac and the new and improved features, Pastebot continues to be a must-have for any iPhone user. In case you don’t know, Tapbots also make beautiful apps - your eyes won’t regret the purchase. Which, by the way, is just $3.99 in the App Store. 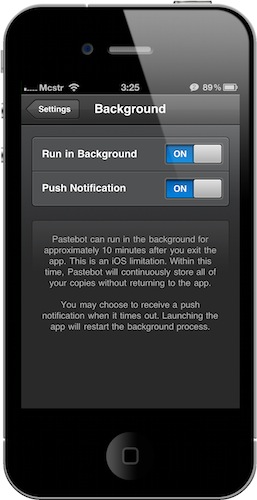