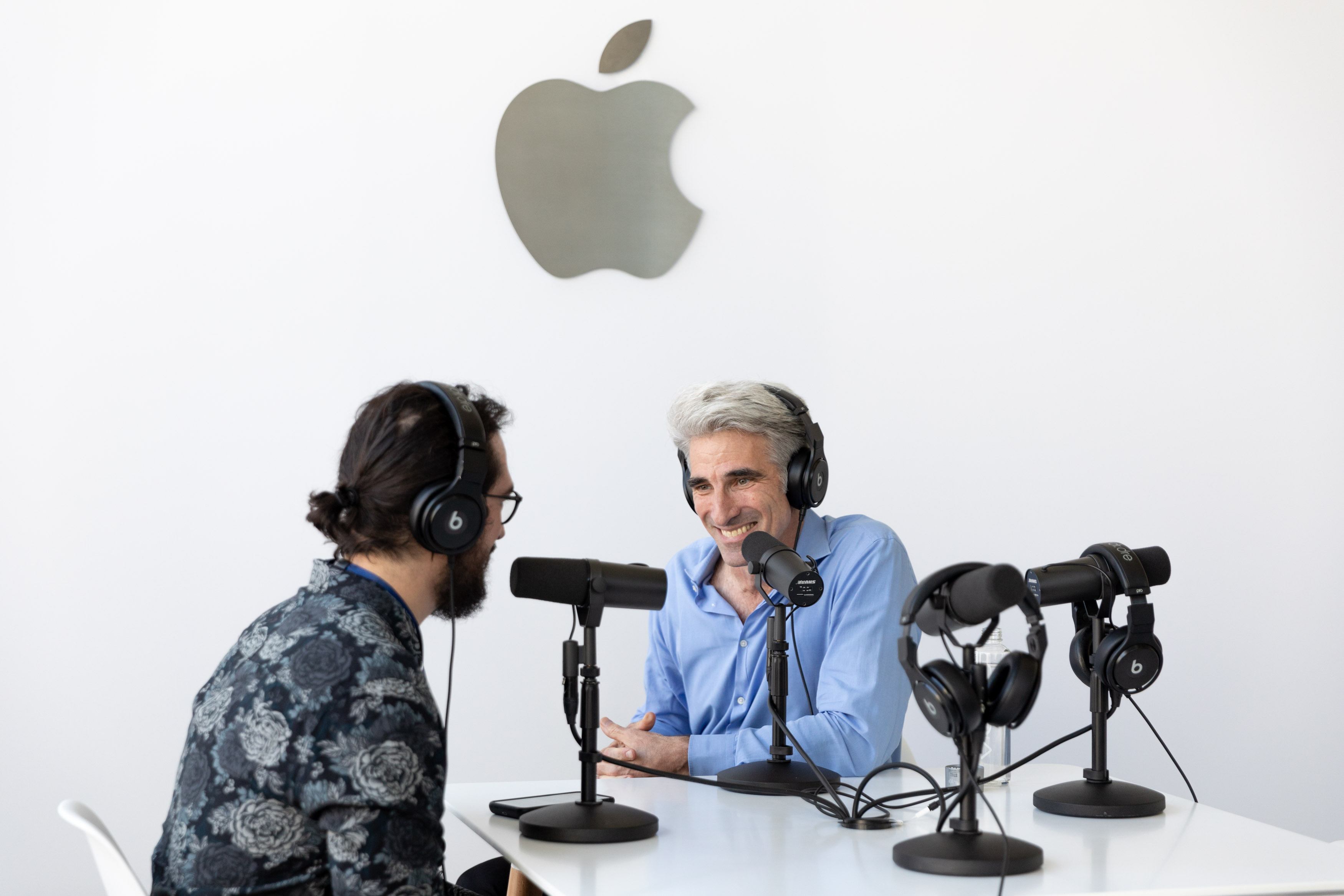 If you enjoy podcasts and Apple, your queue of episodes to check out has likely been bursting full since WWDC kicked off last Monday. So many great shows have been published with analysis and impressions of Apple’s announcements, but one thing that’s been particularly special is the number of podcasts that have featured guests from Apple over the last week. Here’s a roundup of episodes with Apple employees that you shouldn’t miss out on.

END_OF_DOCUMENT_TOKEN_TO_BE_REPLACED

It’s hard to tell when Apple is listening. They speak concisely, infrequently, and only when they’re ready, saying absolutely nothing in the meantime, even when we’re all screaming about a product line as if it’s on fire. They make great progress, but often with courageous losses that never get reversed, so an extended silence because we’re stuck with a change forever is indistinguishable from an extended silence because the fix isn’t ready yet.

But there has clearly been a major shift in direction for the better since early 2017, and they couldn’t be more clear now:

Apple is listening again, they’ve still got it, and the Mac is back.

Excellent summary of the general feeling I’ve gathered coming out of WWDC last week. Apple’s reputation for secrecy makes it hard to tell if they hear the community’s concerns, and for a time the evidence signaled that they didn’t. That’s clearly changed, however, as the last couple years have demonstrated; WWDC’s myriad of goodies for every platform was simply the latest confirmation that Apple is listening, and they care.

Although much of the conversation around what Apple announced revolves around iPadOS and Project Catalyst, based on what I’m hearing on podcasts and seeing in my Twitter timeline, Voice Control definitely is a crown jewel too. Nearly everyone has praised not only the engineering that went into developing it, but also the fact that Apple continues to lead the industry at making accessibility a first-class citizen. Myke Hurley said it best on the Upgrade podcast following the event, the weekly show he co-hosts with Jason Snell, when he said Voice Control is something Apple doesn’t have to do. They do it, he said, because it’s the right thing to do for every user.

Aquino interviewed Sarah Herrlinger, Apple’s Director of Global Accessibility Policy & Initiatives, about three major new accessibility features: Voice Control, Hover Text, and pointing device support. While the iPad enthusiast in me is all about those pointing devices, Voice Control is a tremendously exciting technology that I hope has ramifications for the future of Siri.

Dieter Bohn at The Verge spent some time with the new and improved Safari on iPadOS:

Google Docs has long been a huge problem on the iPad, for two reasons. First, Google’s own iPad app is god-awful and the company seems hell-bent on not updating it to work better. Second, Google Docs in Safari on the iPad right now redirects you to that app even if you “Request Desktop Site.”

On iPadOS, however, Google Docs in Safari seems great.

Admittedly, I only spent about five minutes poking around, but I went straight for the stuff I didn’t expect to work at all — and it worked. Keyboard shortcuts for formatting and header styling, comments, cursor placement, and even watching real-time edits from another person in the doc all worked.

In iPadOS, Apple is setting the Safari user agent to the desktop version (previously, Safari on iPad has used a mobile user agent), but that’s only the tip of the iceberg. Setting the user agent will cause websites to display their desktop varieties, but those were built with the expectation of mouse interactions rather than touch. There’s a lot more details to uncover here, but it looks like Apple has done a huge amount of work under the hood to make touch interactions work intuitively in the desktop browser paradigm.

We’ll have many more details on the new Safari changes over the coming weeks and months, but at first glance it’s great to see that Apple wasn’t kidding about iPadOS Safari being truly desktop-class. 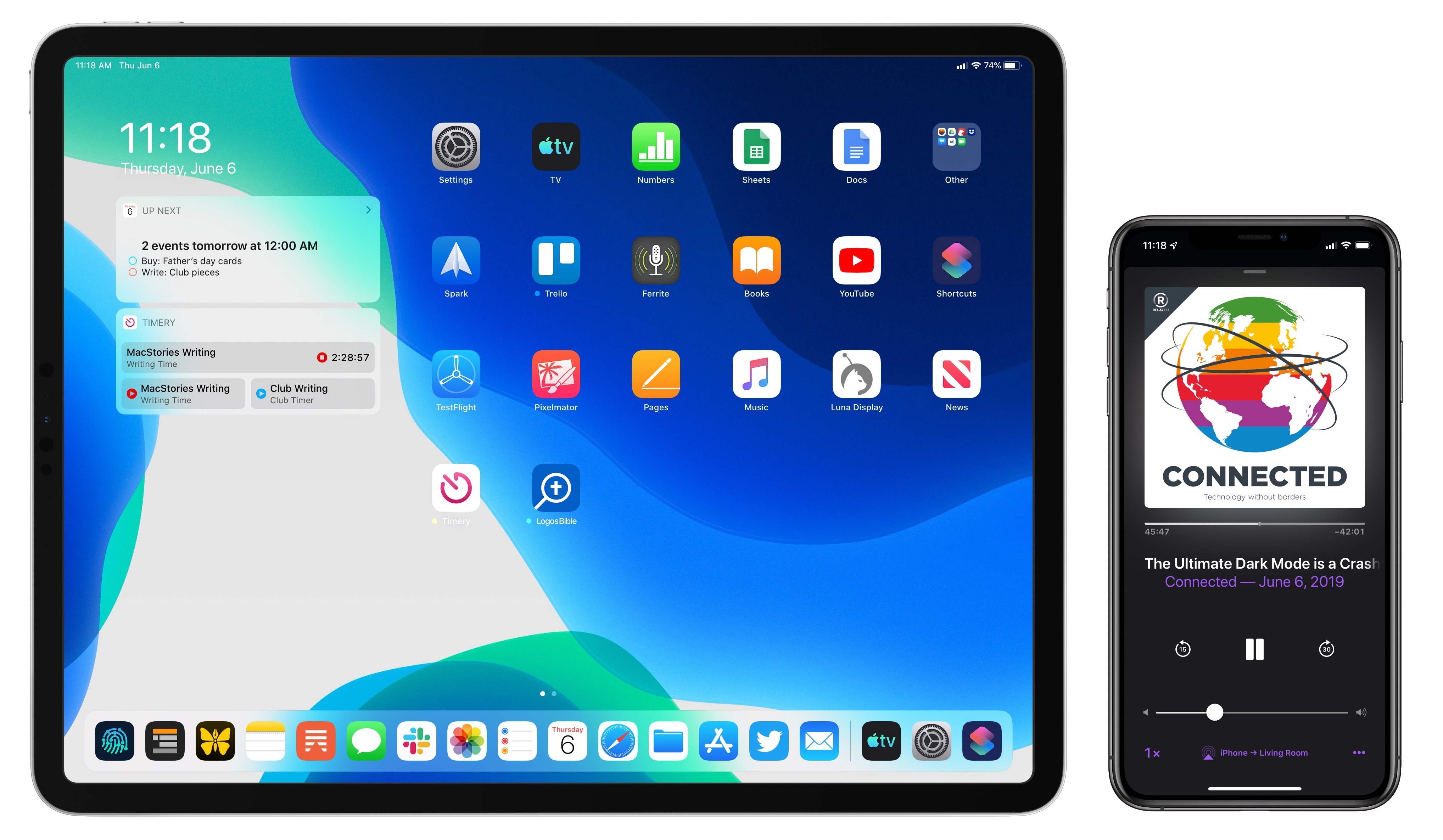 iPad and iPhone users are in for a big treat this fall when iPadOS and iOS 13 launch. Each update is a major release that pushes Apple’s mobile platforms forward in big and small ways, making them more powerful for consumers and professionals alike.

If you haven’t read my iPadOS and iOS 13 overviews yet, the majority of details about each release are documented there. But I’ve been using the beta versions of both systems for a few days now, and while these are just an early look at what the finished releases will be, there are a lot of changes – some very significant, while others are relatively minor – that I’ve been excited to see.

END_OF_DOCUMENT_TOKEN_TO_BE_REPLACED 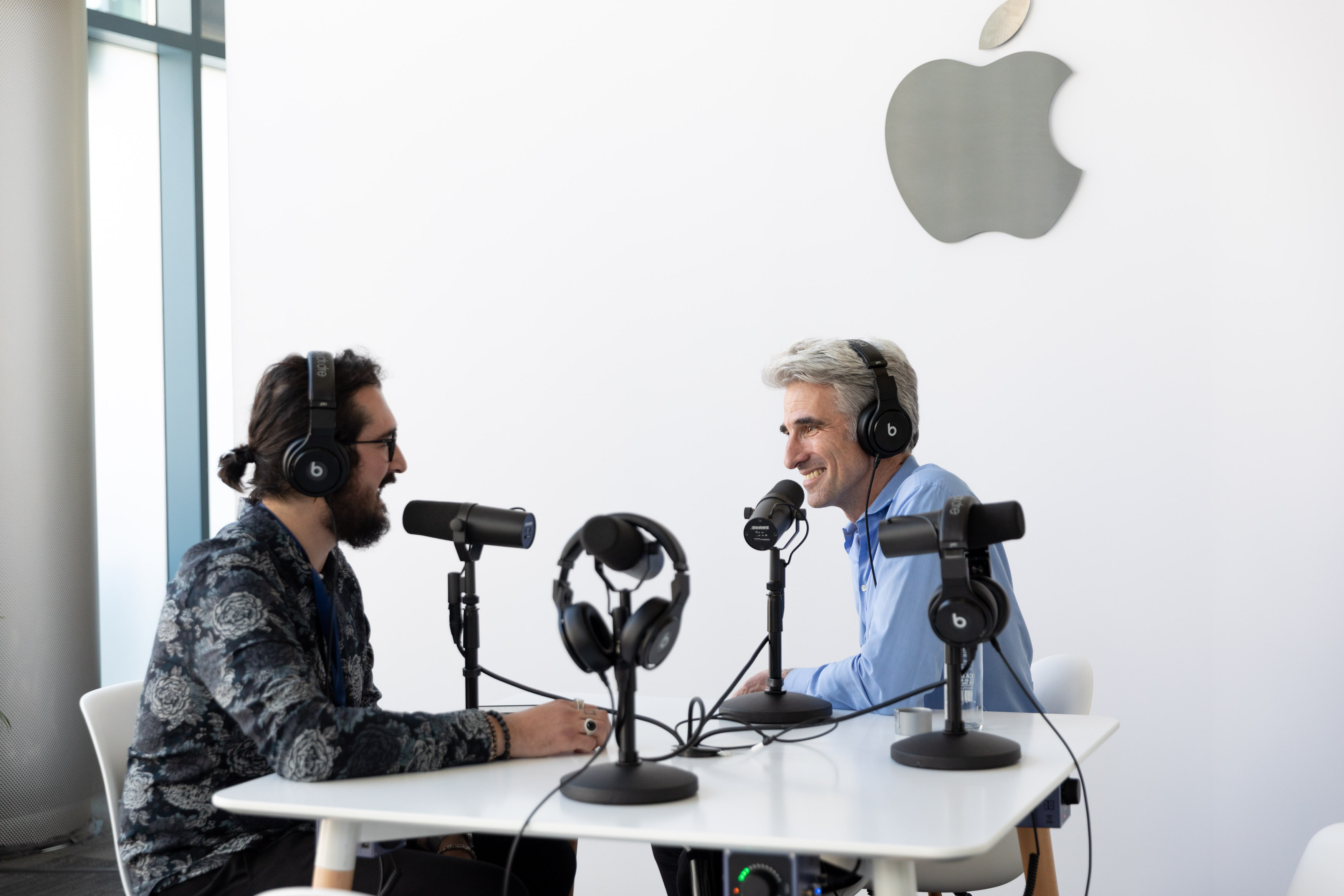 On last week’s episode of Adapt I shared that automation for running shortcuts was one of my top two feature requests for iOS 13. And despite the Shortcuts app not receiving much stage time during the WWDC keynote, Apple has officially granted my wish in a big way.

The Shortcuts app in iOS 13 has a new Automation tab, in which you can configure shortcuts that automatically run based on a wide variety of triggers. Currently, certain automation actions require sending a notification first when the trigger is activated, and that alert contains the option to run the shortcut; other actions, however, include a toggle that determines whether the automation runs automatically in the background, or if you’d prefer an alert instead.

Here is the full list of current automation triggers in iOS 13 beta 1:

END_OF_DOCUMENT_TOKEN_TO_BE_REPLACED

Apple’s truly transforming into a privacy-as-a-service company, which shows in the way that it’s implementing both the new single sign-on account service, as well as its camera and location services updates in iOS 13. The SSO play is especially clever, because it includes a mechanism that will allow developers to still have the relevant info they need to maintain a direct relationship with their users – provided users willingly sign-up to have that relationship, but opting in to either or both name and email sharing.

For years, a major point of debate in tech circles has been the friction between privacy and convenience, particularly as relates to web services offered by companies like Apple and Google. Apple’s privacy-sensitive approach has, in some people’s view, hamstrung it from offering the same level of convenience in its services that’s found in competing services from Google, Amazon, and others who rely on sending your data to the cloud for analyzing.

This year at WWDC, Apple’s new privacy-focused initiatives seem to be striking more of a balance between convenience and security. The company’s new Sign in with Apple feature is a great example: it provides developers a way to contact their users directly, while still protecting those users’ actual email addresses so they can’t be sold to third parties. In my view that’s a brilliant win-win, and the type of innovation I hope we see more of in future products. 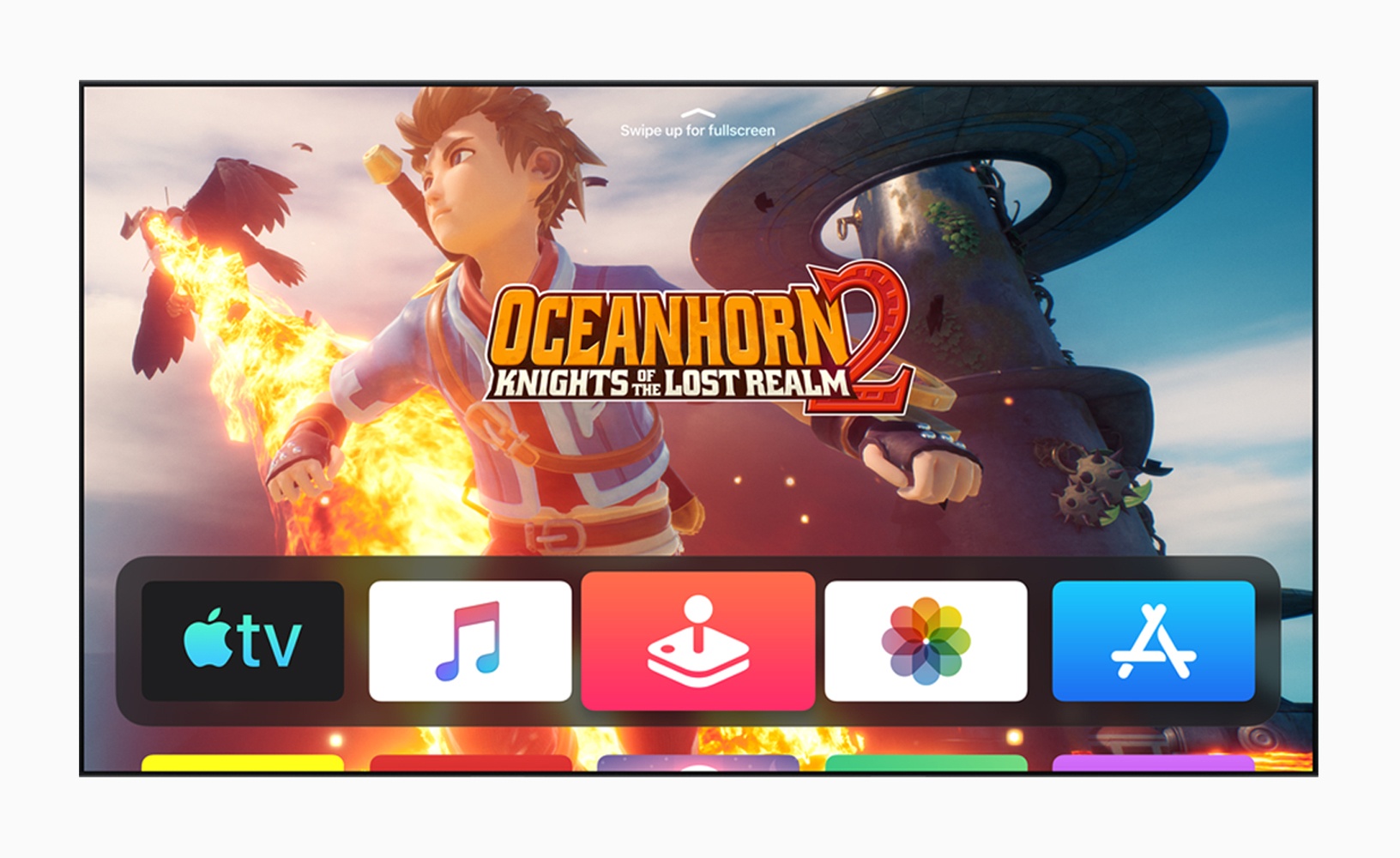