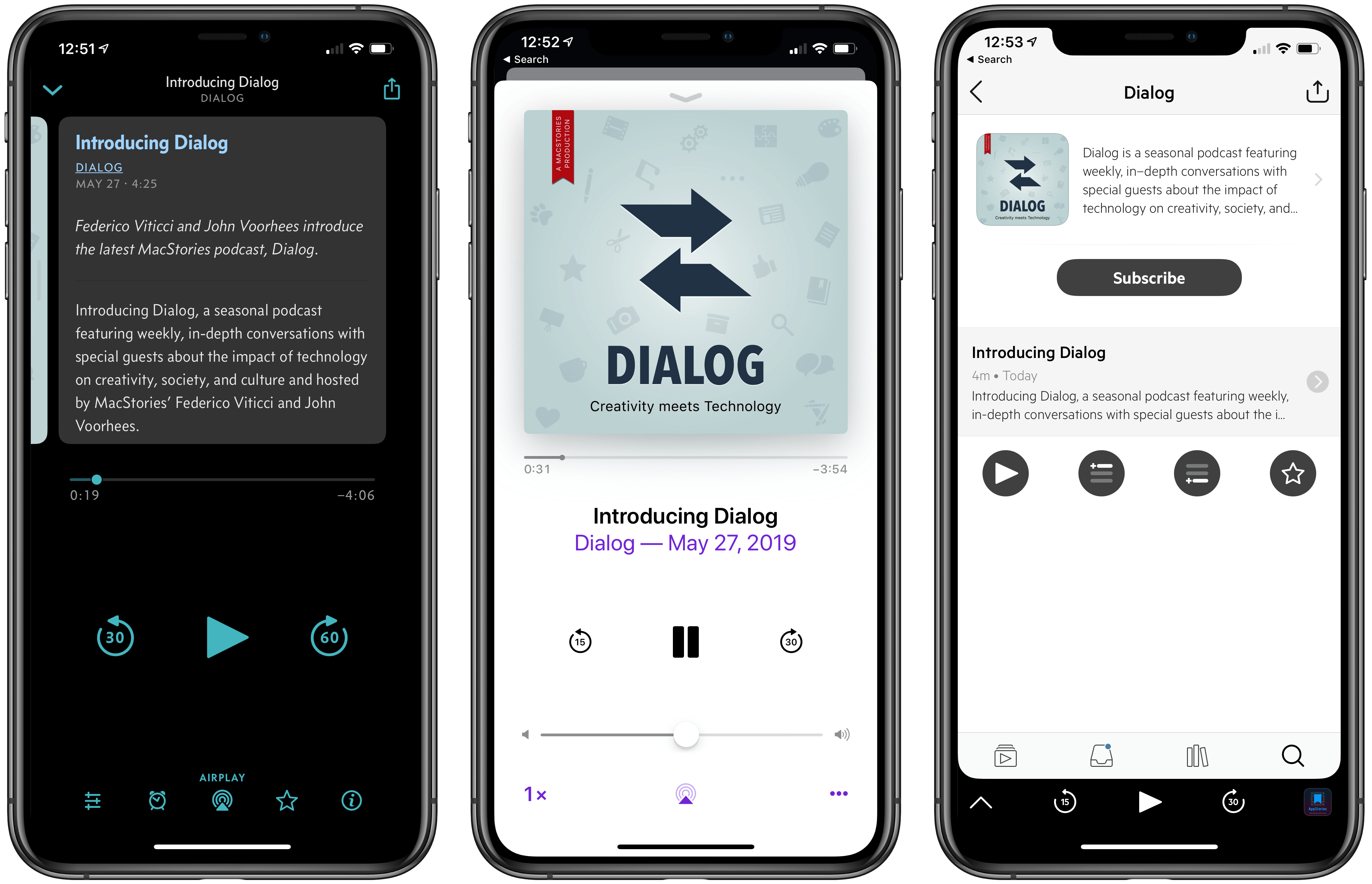 Federico and I are excited to announce a new MacStories podcast called Dialog. The show is a seasonal podcast featuring weekly, in-depth conversations with special guests about the impact of technology on creativity, society, and culture.

You can subscribe here and listen to the first episode on Apple Podcasts.

You can also listen to the first episode on the Dialog website here.

Each season will be organized around a central theme and include in-depth discussions with guests with expertise in the season’s topic. To kick things off, season 1 is all about writers and writing. You’ll hear from a combination of familiar and unfamiliar voices, all of whom are accomplished writers with backgrounds in journalism, songwriting, fiction, screenwriting, and more. Since we began recording episodes, it’s been fascinating to hear guests share their unique perspective on writing, the creative process, and the business of writing and discover areas of overlap between very different kinds of writing.

Dialog is a sort of spin-off of AppStories, our podcast about the world of apps. The interviews we’ve done on AppStories are some of the most popular episodes we’ve produced. However, over time, we realized that AppStories’ format is too constrained to do justice to many of the interviews we want to do. The self-imposed time limit of that show and its topical focus became a barrier.

That led me to sketch out the contours of what would become Dialog during our annual MacStories winter holiday break. To overcome AppStories’ constraints, I decided we needed to flip that show on its head both structurally and topically.

Structurally, Dialog’s conversations with guests are far more in-depth than we could accomplish in a 30-minute AppStories interview. Dialog’s interviews will run as long as two hours but will be split over two episodes to keep each episode to about one hour long. It’s a format that also provides headroom for Federico and me to participate more fully in each episode; less like a traditional interview and more of a conversation with our guests.

Topically, Dialog’s focus is also broader than any interview we’ve done on AppStories. Of course, you can expect Federico and me to come at each season from a tech angle, but that’s the lens through which each season will be viewed more than it is the subject matter of the seasons themselves.

Although Dialog is different than anything we’ve done before, its roots are also firmly grounded in MacStories’ character. We enjoy the apps and hardware we try every day, but what we love the most is telling the stories of the people who make those things, exploring how they empower creativity, and reflecting on their impact on the world around us. Dialog is a natural extension of our approach to technology.

The first episode of Dialog, which you can listen and subscribe to here, introduces the topics we will cover this season. Federico and I talk about our backgrounds in writing, how we got started, our approach to writing at MacStories, the business of writing online, and a lot more.

Next week, we’ll be joined for a two-part conversation by our first guest, John Gruber of Daring Fireball, who will be followed by singer-songwriter Frank Turner, and other guests throughout the summer. At the end of the season, Federico and I will wrap up what we’ve heard and learned from the writers we’ve talked to before taking a break to plan season 2.

New episodes of Dialog will be published every Tuesday during season 1. You can find the show at dialogpodcast.net, in podcast player directories, and on Twitter as @DialogPodcast. Of course, you can also subscribe to the show in Apple Podcasts, Overcast, Pocket Casts, and via RSS. If you use a podcast player that supports seasons like Apple Podcasts, you’ll receive episode #1 no matter when you subscribe and have the option to download full seasons, which makes listening to them in order easier. However, Dialog will also work even if your podcast player doesn’t have season support. Instead, episodes will be listed in reverse chronological order like shows that aren’t seasonal. 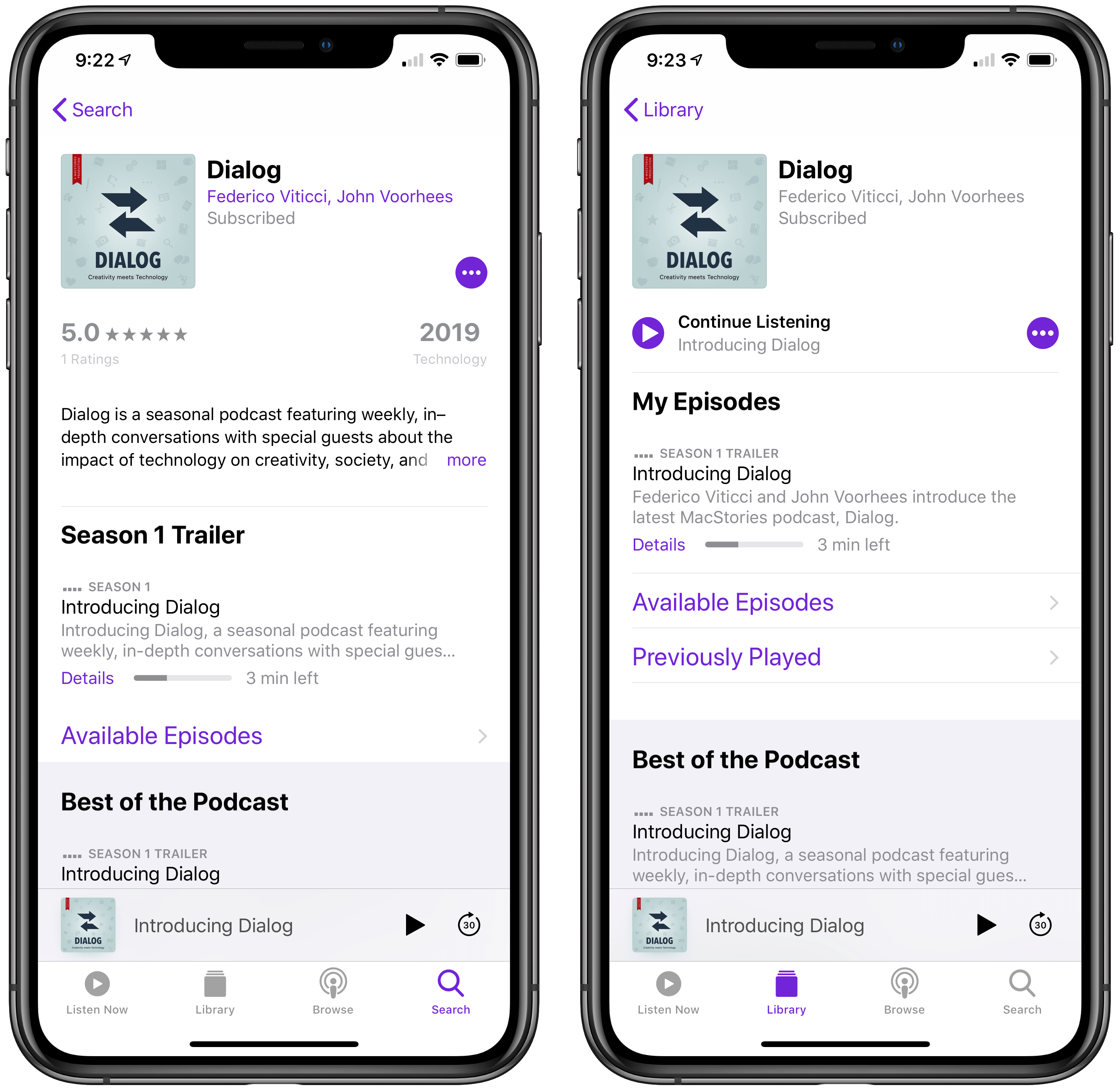 We’re going to try something different on MacStories with Dialog too. Each new episode will be accompanied by an article by Federico or me about the topics discussed as a way of extending the conversations with guests in written form.

As I explained above, although Dialog is unique, it also fits squarely into the character of the site, which is why the show art includes the familiar MacStories bookmark that says ‘A MacStories Production.’ Somewhere along the line, MacStories became more than just a website. First there was Club MacStories, then AppStories, and now Dialog. The bookmark is a small reminder that what you’re listening to is part of MacStories, and it’s something you can expect to see more as we update our existing properties and launch new ones.

Finally, Dialog isn’t a project that Federico and I could have pulled off by ourselves, and we’d like to thank everyone who has helped get the show off the ground.

The website and show art were designed by Silvia Gatta who has done a fantastic job conveying the concept of the show. The website and WordPress backend were expertly built by Alessandro Vendruscolo to support Apple’s extended podcast features, so it works with our trailer, seasons, and more. The chill, jazzy vibe of Dialog’s music, which I absolutely love, was composed by Brave Wave Productions’ George Art Baker, alias Smoke Thief. Each episode of Dialog has also been edited by Jim Metzendorf who’s done a fantastic job of making the show sound great.

Federico and I would love it if you gave our first episode a try. Episode 1 introduces the show but also sets the stage for subsequent interviews including the one with John Gruber that will be published beginning on June 4th. Because the show is designed to appeal to an audience that’s broader than the MacStories readership, we’d also appreciate it if you could share it with anyone you think may be interested.

As always, thank you for reading and listening. We hope you enjoy the show.