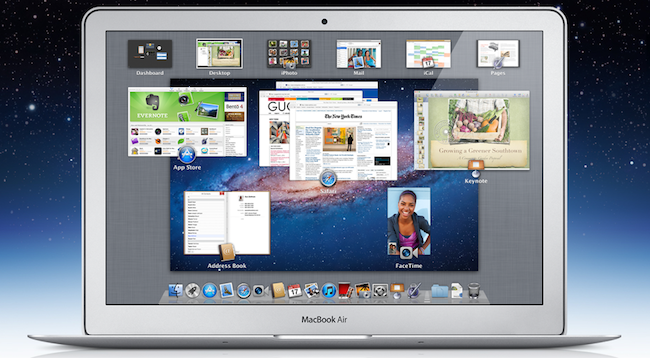 Over the past few weeks, a number of “leaks” from Apple’s supply chain and retail operations suggested the company was on track to launch the next major version of OS X, Lion, alongside new Macs this week, more specifically yesterday, July 14. According to the rumors, Apple was gearing up to unveil new MacBook Airs, Mac minis and white MacBooks all featuring updated Sandy Bridge processors from Intel and Thunderbolt connectivity. Whilst rumors about Lion immediately sounded fairly accurate as Apple seeded the “Golden Master” version of the OS to developers on July 1 (unless major issues are discovered, the GM version usually matches the public release’s build number and codebase) and the company said at the WWDC Lion would be available in July, speculation about new Macs generated from a series of factors that had been capturing the interest of the tech press since February.

Rumors about new MacBook Air models, in fact, started five months ago when Cnet was first to speculate on new versions with updated CPUs coming out in June; the prediction seemed accurate back then as Apple started updating its Mac line with said specs, and kept sounding credible in the following months when more rumors claimed the new Airs could be released in the June/July timeframe, with new ultra-low voltage Core i5 and Core i7 processors from Intel, likely a faster flash memory and, on top of new CPUs and Thunderbolt, more storage for the entry model.

Speculation about the new MacBook Airs, however, doesn’t stem from obvious hardware upgrades alone. In the past weeks, allegedly leaked part numbers from a “reliable source” were posted online, seemingly trying to pinpoint the next hardware releases from Apple: new MacBook Airs, and new Mac Pros. Before these part numbers, though, other rumors had suggested this summer could see the release of new Mac minis and Mac Pros. So whilst the Mac minis were missing from the first batch of part numbers, the Mac Pro prediction seemed bound to happen. And again, according to another rumor, Apple won’t release new Macs – any of them – until Lion comes out, as the company wants new machines to come equipped with new OS by default. That is, Lion and the rumored new Macs should launch with short distance between each other.

Part numbers, however, have proven to be unreliable at best. The first batch of part numbers mentioned above was in fact later revised to specify that, yes, new MacBook Airs are set to come out soon, but the Mac Pro identifiers were wrong. Those numbers initially associated with the Mac Pros were then claimed to be model numbers for new Mac minis, and a new white MacBook. All things considered, the part number revision appeared to be the best guess to date as the white MacBook, whilst seemingly forgotten by the masses in lieu of the new Air “crown jewel”, had its 15 minutes of glory with some previous rumors, too.

For the reasons and timeline observations listed above, until two days ago mostly everyone used to dwell upon the Apple-related Internet lands was firmly convinced OS X Lion and a slew of new Mac hardware would come out on Thursday, July 14.

A few days ahead of the rumored July 14 “release date”, though, a number of people questioned how, effectively, Apple could unleash a new OS with Lion app submissions still in their infancy and no press release to formally confirm the availability of Lion, something that, some people said, would be needed for a major milestone in Apple’s software catalog. App submission guesses and lack of press release aside, the doubts on July 14 were reinforced just a few hours ahead of midnight when The Loop’s Jim Dalrymple tweeted no one should lose his sleep waiting for Lion or new Macs on Thursday. Later, All Things Digital published a piece claiming that the rumor blogs got the release date off by a week, with new product launches set for late next week.

As July 14 passed by and July 15 is turning to an end, at least in Europe, there’s still no Lion on the Mac App Store or new Mac model to frown upon for the lack of desired/rumored features. Today, however, has seen the leak of what could be considered the most credible piece of information about future products yet: earlier this afternoon, MacRumors posted images of what looks like a new LED Cinema Display featuring the same design of the current generation, with Thunderbolt connectivity on its back. The images were accidentally uploaded to Apple’s servers (perhaps during the last maintenance update) and, whilst no official product description has been leaked, the fact that a MacBook Pro is seen daisy-chaining two Cinema Displays could be a proof of these new units carrying at least one Thunderbolt port. Still, the most intriguing detail isn’t how Apple managed to let this slip: rather, it’s the URL of the images, which contains the same part number of the initially rumored Mac Pro and then Mac mini & MacBook. According to MacRumors, even the part number revision had something wrong in it, as the MacBook part number is actually the identifier for the new, leaked LED Cinema Display.

What does this new LED Cinema Display leak say about next week? On the surface, it does seem to suggest we’re going to get new displays, Mac Pros and Mac minis with Thunderbolt and Lion. After all, these leaked images depict LED Cinema Displays connected to different pieces of Mac hardware, including Mac minis and Mac Pros, which, as mentioned above, had their appearance in the rumors, too. These image leaks, though, don’t confirm anything about what’s rumored for next week. Sure they are credible and they come straight from Apple’s servers, but are they an absolute confirmation of anything Apple is prepping for the last days of July? No.

These images show Macs running Lion, but they don’t confirm the new OS is necessarily coming next week. Nor the fact that they were discovered today does imply that new hardware has to come out next week, for as likely as it seems. The Mac minis and Mac Pros showed in the images, too, are no confirmation of new models coming soon – Apple could have created these pictures to show backwards compatibility with Mini DisplayPort, or they may end up not using these images at all. We don’t know. These images look legitimate to us and MacRumors did a fantastic job in digging them up, but you shouldn’t listen to anyone saying they also confirm anything we’ve heard or rebutted so far. Because after all, they’re just images found on a server.

Apple will release Lion in July and quite possibly new hardware to go with it. Maybe we’ll see new MacBook Airs, MacBooks, Mac minis, Mac Pros and LED Cinema Displays coming all together on the next online store refresh. But until then, reading Apple’s tea leaves is always a tricky business.