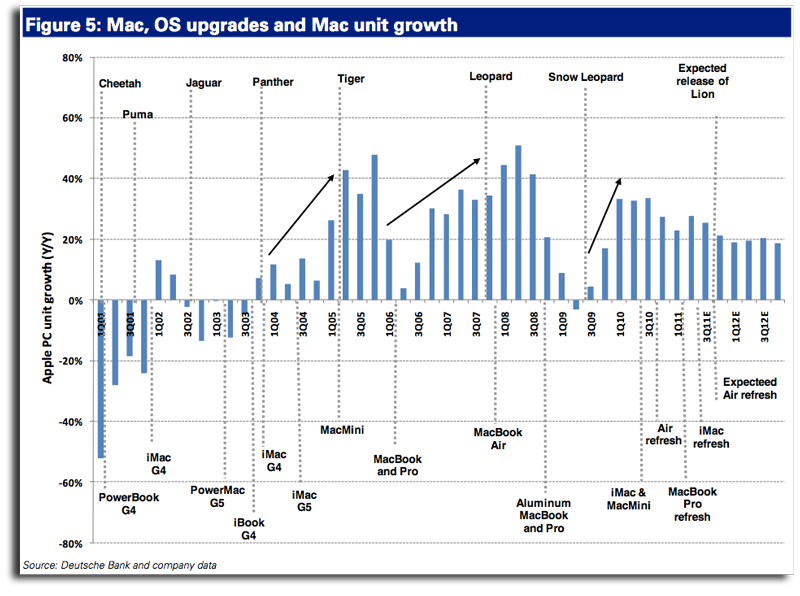 Everywhere you look on Apple’s new Lion page, the MacBook Air is decisively front and center. From the gestures video to screenshots detailing the new features in Apple’s upcoming OS, Steve Jobs and company are decidedly proud of their thinnest Mac yet. AppleInsider reported that Apple would build 400k revitalized MacBook Airs this month (stuffed with Sandy-Bridge processors) after 1 million of them shipped in the first quarter; Phill Schiller at last Monday’s WWDC 2011 keynote went so far as to cite the MacBook Air for Apple’s continuing success. “It’s beautiful, it’s thin, it’s light, it’s fast… The whole PC industry wants to copy it.”

According to AppleInsider, Wall Street analyst Chris Whitmore of Deutsche Bank predicts that if 1.5 million MacBook Airs were shipped per quarter based on current estimates, that the MacBook Air would make up half of Apple’s notebook business. He predicts that many new customers are waiting for the latest technology such as Thunderbolt, Sandy-Bridge processors, and Lion to hit the laptops before consumers upgrade from their current setups.

Darrell Etherington from GigaOM wrote a piece on Lion’s hardware requirements, suggesting that the animation heavy interface would require the latest technology such as an SSD, core i-series processor, and lots of RAM to use comfortably. With Lion taking advantage of gestures on newer trackpads, and requiring the latest technology to use comfortably, he makes the case that the MacBook Air, boasting at an affordable price point, beautiful design, and fast tech, is the perfect candidate for consumers as they purchase new machines.

The MacBook represents Apple’s past; it’s a well-designed traditional notebook that provides users looking for an alternative to Windows laptops with a solid, high-quality, OS X-based alternative. But the MacBook Air represents Apple’s future. It’s a slim, lightweight device with a futuristic design aesthetic, but more importantly, it’s a perfect partner for OS X Lion and iCloud, and like Apple said at its WWDC keynote, iCloud is the new center of the Apple universe.

New MacBook Airs could be coming as soon as Wednesday as Apple’s back to school promotions kick off, but that rumor was later redacted as part numbers matched a series of unlocked iPhones instead of the new laptops. A June or July release is still predicted as MacBook Air supplies dwindle, and there even might be a Mac Mini and Mac Pro refresh to accompany the updated laptops.

Whitmore writes that Mac sales generally spike after a new OS update, and in combination with refreshed MacBook Airs, could fuel a very good summer for Apple. At its heart, however, Apple sees the MacBook Air as the driver of innovation - it is no longer the MacBook Pro or the iMac Apple wants you to think of, but their tapered and lightweight notebooks.

“In two years time, if not less, when you think ‘Mac,’ you’ll think about the MacBook Air first and foremost. And that’s by design, as Apple continues to have outsized influence in the changing definition of personal computing.” I tend to agree with Etherington. Today, the future of the MacBook starts with the MacBook Air.