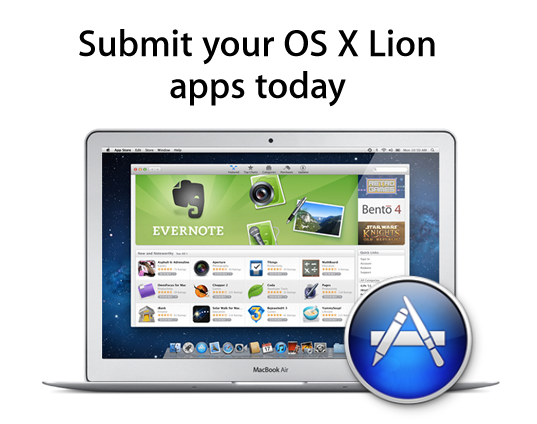 Following the release of the Xcode 4.1 Golden Master seed and with OS X Lion rumored to be nearing its public release, Apple has just informed registered Mac developers that they can now submit apps built for Lion to the Mac App Store.

OS X Lion, the eighth major release of the world’s most advanced operating system, will soon be available to millions of Mac users around the world. Submit your Lion apps for review now so they can be on the Mac App Store when Lion ships this month.

In the past weeks, in spite of various developer previews of Xcode 4.1 for Lion available on the Dev Center, developers were unable to submit apps built specifically for the new OS. In OS X Lion, developers can take advantage of hundreds of new APIs to enable features like full-screen mode, push notifications for apps, new Aqua controls including iPad-inspired popovers, auto-save and versions, as well as sandboxing and multi-touch gestures.

Lion is rumored to hit this week, alongside new MacBook Airs with Sandy Bridge processors and Thunderbolt, and new Mac Pros. The GM build of Lion was seeded on July 1, leading to speculation that, after two weeks and with no major bugs found, the final version is ready to become available on the Mac App Store at $29 any day now. Several developers we polled in the past week told us they were ready to submit their new apps, but Apple (and Xcode) wouldn’t let them. With the release of Xcode 4.1 GM today, Apple flipped the switch on Lion submissions, but it’s unclear how many apps the Review Team could manage to approve before the rumored Lion launch. Clearly Apple wants some Lion-ready apps to be ready for Lion’s debut, so it’ll be interesting to see how this will play out in the next 48 hours.

Apple announced Lion would come out sometime in July as Mac App Store exclusive. In the past, Apple began accepting iOS 4 submissions on June 11 (roughly 10 days ahead of iOS 4’s release) and Mac App Store submissions in November, whilst the Mac App Store went public on January 6.