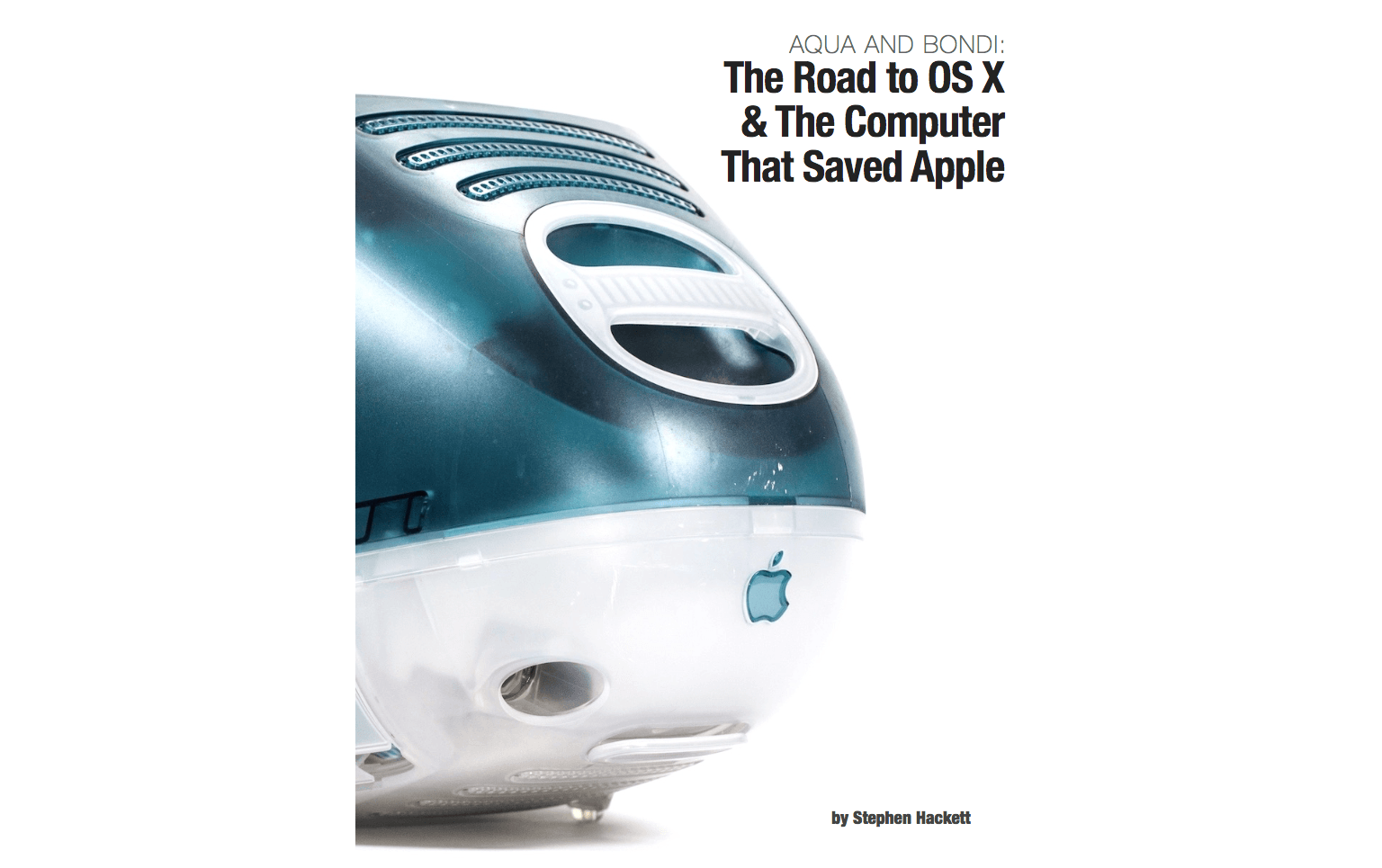 Stephen Hackett of 512 Pixels has published a book called Aqua and Bondi: The Road to OS X & The Computer That Saved Apple, a history of the critical role OS X and the iMac G3 played in Apple’s comeback from the brink of financial ruin in the late 90s. As Hackett explains in the introduction to the book,

OS X and the iMac’s stories are intertwined, but are often told separately. Apple’s strength is most obvious when its hardware and software are working in harmony, and that’s what was needed to save Apple in the late 1990s. Turns out, it worked.

Aqua and Bondi shares that story for those who haven’t read it before. It’s a consideration of Apple at a very interesting time in its life and the products it shipped.

I had the pleasure of reading an advance copy of Aqua and Bondi and love it. Not only is the story of OS X and the iMac G3 told in a compelling and accessible way, but the book is full of fantastic photos drawn from numerous sources, including Hackett’s own collection of colorful iMacs.

Aqua and Bondi is available from the iBookstore and as a PDF from aquaandbondi.com for $3.99.

Apple released iTunes 12.4 today with various design enhancements. iTunes 12.4 brings the sidebar back to the left side of the app when you are navigating your library of media, whether that’s music, movies, TV shows, apps, podcasts, or audiobooks. The sidebar is hidden when you navigate Apple Music, the App Store, and the iTunes Store.

Apple has also redesigned the media picker that sits just above the sidebar. Previously the picker consisted of a row of icons representing each media type and could be edited to include only the media types you wanted to show. The new media picker is a dropdown menu that like its predecessor is editable, and adds the name of each type of media next to its icon. Music is the one media type that cannot be removed from the media picker. iTunes 12.4 also includes simplified menus.

It is not clear from the release notes whether iTunes 12.4 includes fixes related to a recently-reported bug that deleted music files from iTunes in rare circumstances that Apple has been unable to reproduce.

Today’s updates also include a minor revision to OS X. Version 10.11.5 of OS X “improves the stability, compatibility and security” and addresses a handful of enterprise-related issues.

A few weeks ago on the Accidental Tech Podcast, Casey reminded me that it’s possible to customize the icons shown for hard drives. I knew this, but hadn’t done it in a long time. John chided Casey for not continuing this habit, but I felt just as guilty. I enjoy it, it’s easy to do, so why not do it?

END_OF_DOCUMENT_TOKEN_TO_BE_REPLACED 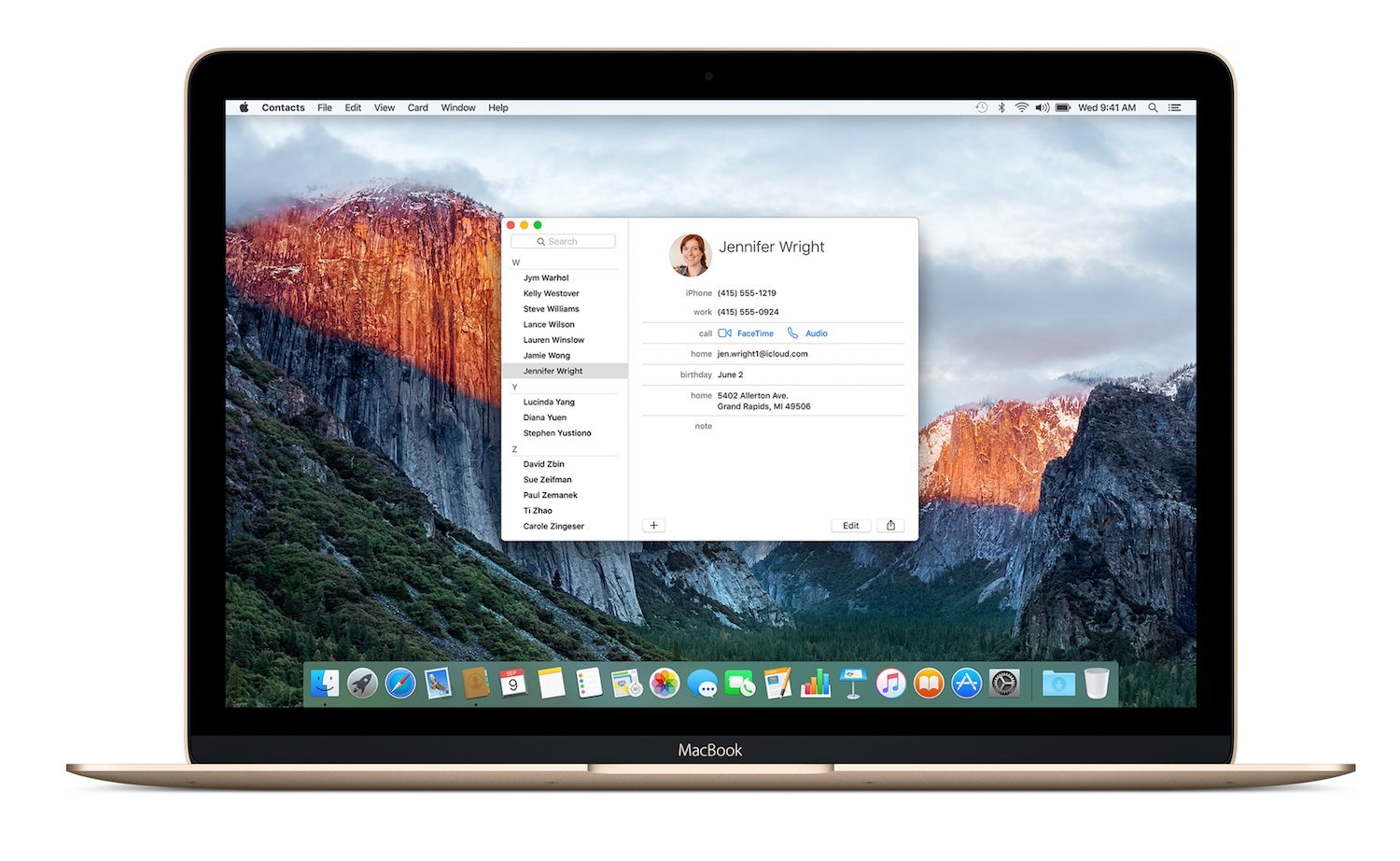 END_OF_DOCUMENT_TOKEN_TO_BE_REPLACED

I’ve been using laptops for decades. The first one I ever owned was a PowerBook 3400c, and I’ve never not owned one since then. But now, in contrast to my iPad, my laptop seems altogether much more cumbersome than I prefer to deal with. It’s much, much heavier and bulkier than my iPad, especially when you factor in its power supply and a carrying case.

It’s much more fragile, too—I regularly toss my iPad around in ways that I would never do with my MacBook—and as a result, it’s much less versatile, at least for me. This is partly because the MacBook also restricts my movement; I have to be sitting or standing in a way that accommodates typing, whereas I have so much flexibility with my tablet that I’ve become accustomed to using it while positioned in just about any variant of laying down, sitting, standing or even walking.

He’s not done with OS X – an important distinction.

Eddie Vassallo, writing on the Entropy blog on using the iPad Pro in combination with a Mac mini via VNC:

The beauty of a single machine fully dedicated to the iPad Pro is that we always have a full OS X instance at the ready for anything that arises - from exporting and compiling app builds to transcoding video, to downloading and uploading large files. Heck, we’ve even found it useful for firing up a desktop instance of Chrome when pesky sites misbehave on mobile Safari. It has truly filled the gap for any desktop-class workflows we require (that have not already been fulfilled with an iOS App or Web-based method).

Before switching to the iPad as my only computer and before iOS 9 multitasking (I would say between 2011 and 2014), this is also what I did. I set up a personal mini at Macminicolo (a fine company which also hosts this very website) and relied on Edovia’s excellent Screens app to access desktop apps like iTunes and Chrome. I also used to keep the mini always running for Hazel rules (here’s an archive of posts about it) and other desktop automation. I do most of this stuff directly on iOS now, but if you need a Mac for some key tasks, Screens with iOS multitasking sounds better than ever.

From Mac OS X 10.5 Leopard onwards, while the Spotlight menu and find-as-you-type list of results on the upper right corner of the desktop remained essentially unchanged, this neatly organised window disappeared, and the Show All option simply triggered a new Finder window with the search results amassed in an unorganised fashion. If you didn’t find what you were looking for in the first results Spotlight displayed from the Search menu on the top right, you’d have to perform more organised searches with various filters and criteria directly from a Finder window. But the overall approach was less clean and clear than under Mac OS X Tiger. On the other hand, Spotlight got better as an app launcher and new features were introduced, like the ability to do quick calculations from the Spotlight search field itself.

When the Spotlight interface was finally redesigned with the release of Mac OS X 10.10 Yosemite, it was great to see that Apple was revisiting that kind of search interface, with a panel front and centre, and with the results organised in categories in a similar way as it was under Tiger. Since I upgraded from Mac OS X 10.9 Mavericks to 10.11 El Capitan avoiding Yosemite completely, I only started using this new Spotlight interface in recent times. And I have mixed feelings about it.

This is a terrific analysis of the behavior and design choices of Spotlight for OS X Tiger and the latest El Capitan. I agree with Riccardo – the organization of results in the original interface still looks better.

Daylite 6 was released today for both Mac and iOS, and it’s a major upgrade for the business productivity app. Already boasting a complete set of tools for managing projects, clients, and tasks for an individual or workgroup, the new version adds a slew of new features that take the app even further.

One of the major highlights of this release is the announcement of “Daylite Cloud.” Previously, centralizing a group’s Daylite data required running a copy of Daylite Server. With Daylite Cloud, it’s all handled seamlessly, allows offline access, is cheaper, and has no barrier to incorporating it into your company workflow.

The task management features of Daylite have also expanded. The constraints of the previous Pipeline/Activity Set features have been augmented by a “Task Lists” feature, allowing free-form creation of task lists that might not be assigned to a linear timeline, with complete control over ordering, a new entry interface, and additional fields for time, location, estimated time, and other details. There’s also a new “Smart Filtering Bar” for viewing tasks by details such as assigned team member, category, or keyword.

The iOS version has new goodies as well, with features including Today Widgets, full filtering capabilities, and improved editing of Daylite entries. It also adds file linking tools which allow you to snap a photo and link it to one or more items in Daylite.

If you’re a Mail.app user, also check out the Daylite Mail Assistant. It’s not a new feature, but it’s impressive. It allows you to link emails to Daylite items, schedule meetings, and share data without a chain of cc’s and forwards, all from within Mail.

For a complete rundown of all the new features, check out the announcement post on the Daylite blog. You can learn more about Daylite on the Marketcircle website.

In addition to iOS 9.1, Apple has also released OS X 10.11.1 and watchOS 2.0.1 today. On both updates, there are a bunch of performance improvements and new emoji characters are supported. On watchOS, there are some welcome fixes: Apple has revolved a problem that prevented software updates from completing successfully, and it has fixed various issues that were impacting battery life.

Both software updates are available now for over-the-air installations.