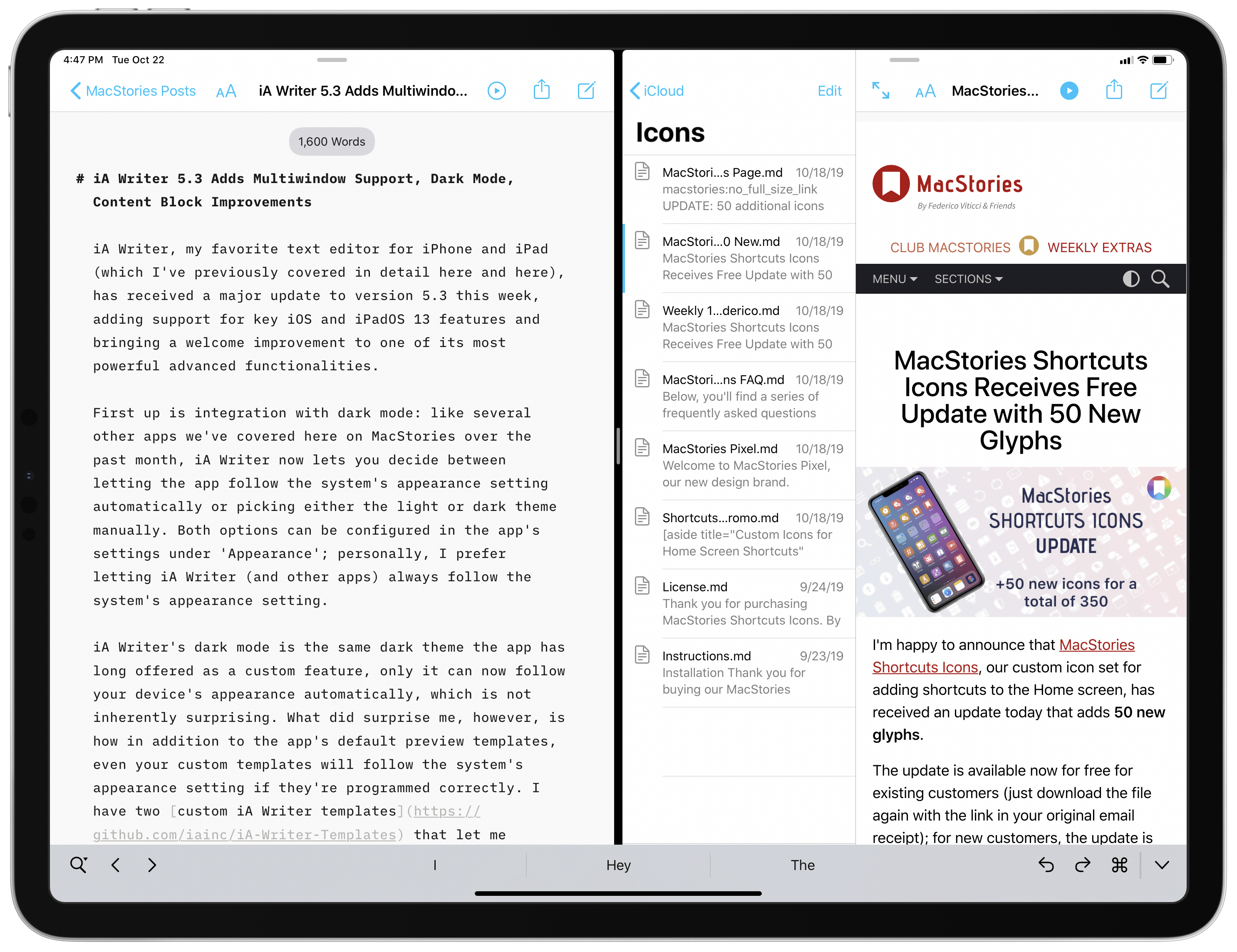 iA Writer, my favorite text editor for iPhone and iPad (which I’ve previously covered in detail here and here), has received a major update to version 5.3 this week, adding support for key iOS and iPadOS 13 features and bringing a welcome improvement to one of its most powerful advanced functionalities.

First up is integration with dark mode: like several other apps we’ve covered here on MacStories over the past month, iA Writer now lets you decide between letting the app follow the system’s appearance setting automatically or picking either the light or dark theme manually. Both options can be configured in the app’s settings under ‘Appearance’; personally, I prefer letting iA Writer (and other apps) always follow the system’s appearance setting.

iA Writer’s dark mode is the same dark theme the app has long offered as a custom feature, only it can now follow your device’s appearance automatically, which is not inherently surprising. What did surprise me, however, is how, in addition to the app’s default preview templates, even your custom templates will follow the system’s appearance setting if they’re programmed correctly. I have two custom iA Writer templates that let me preview Markdown documents as they’d look once published on MacStories; with iA Writer set to follow the system’s appearance by default, when I enable dark mode from Control Center, my custom templates in iA Writer use it too. 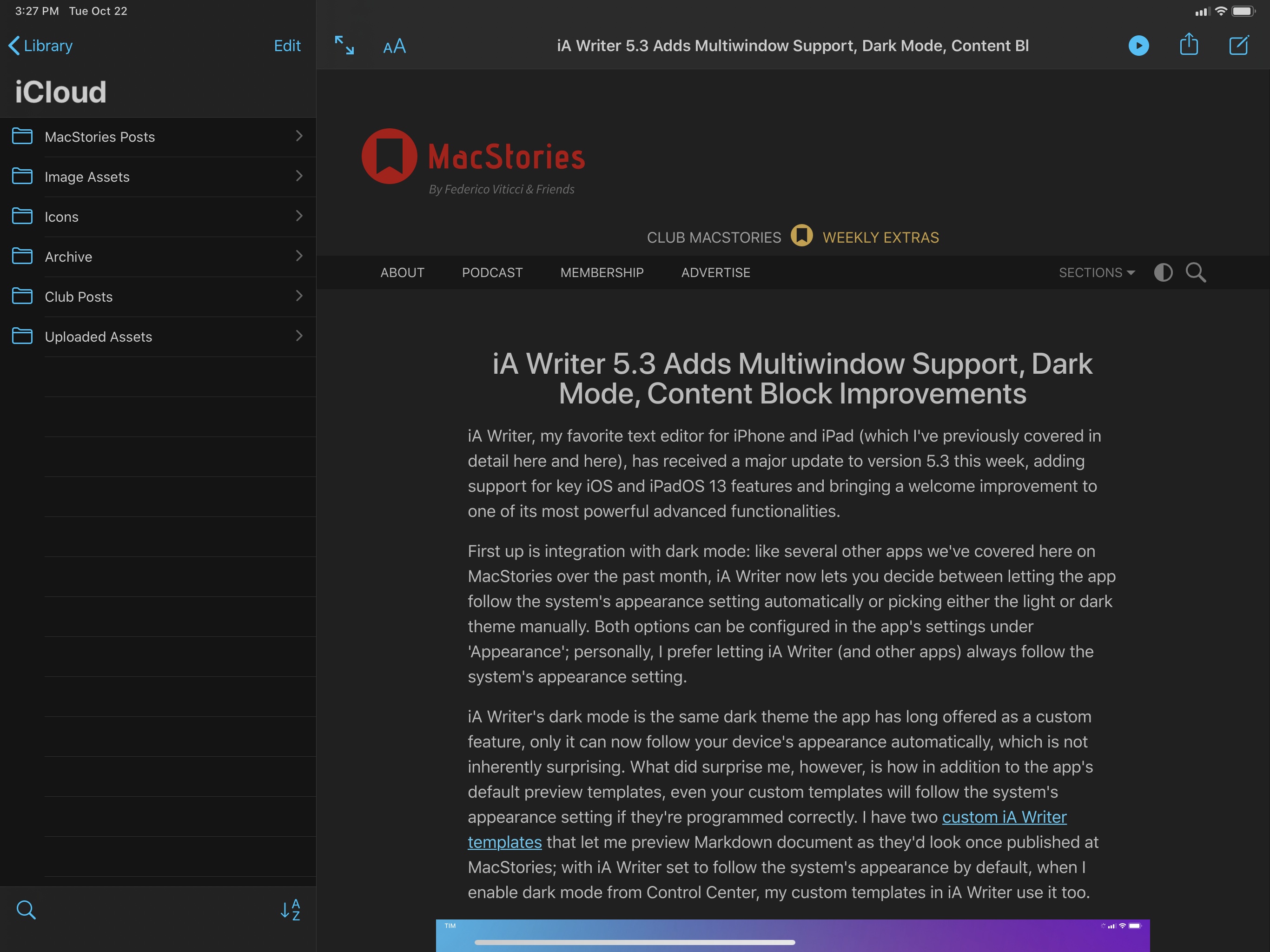 My custom MacStories template in iA Writer can switch to dark mode automatically alongside the rest of the app now.

For iPad users, the big addition to iA Writer 5.3 is full support for multiwindow in iPadOS 13. Multiple documents can now be opened in multiple windows of iA Writer: when doing so, the app will spawn new primary windows that feature the full set of navigation controls in the sidebar to navigate in your library and open any other document. The ability to open multiple instances of iA Writer means you can keep your frequent documents in Slide Over, work with multiple editor windows side-by-side in Split View, or combine different iA Writer windows with different apps in multiple spaces on your iPad. The choice is all yours. 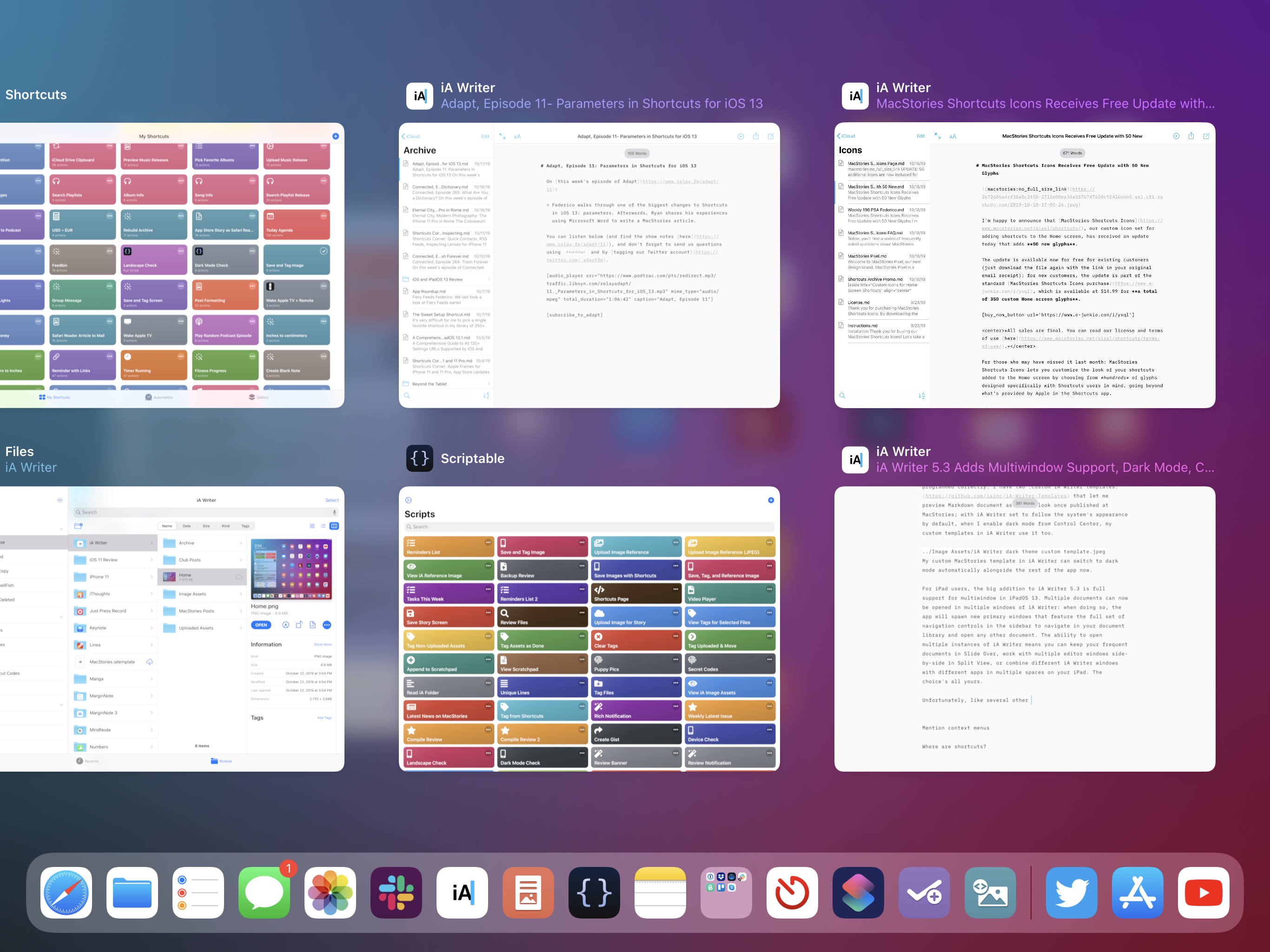 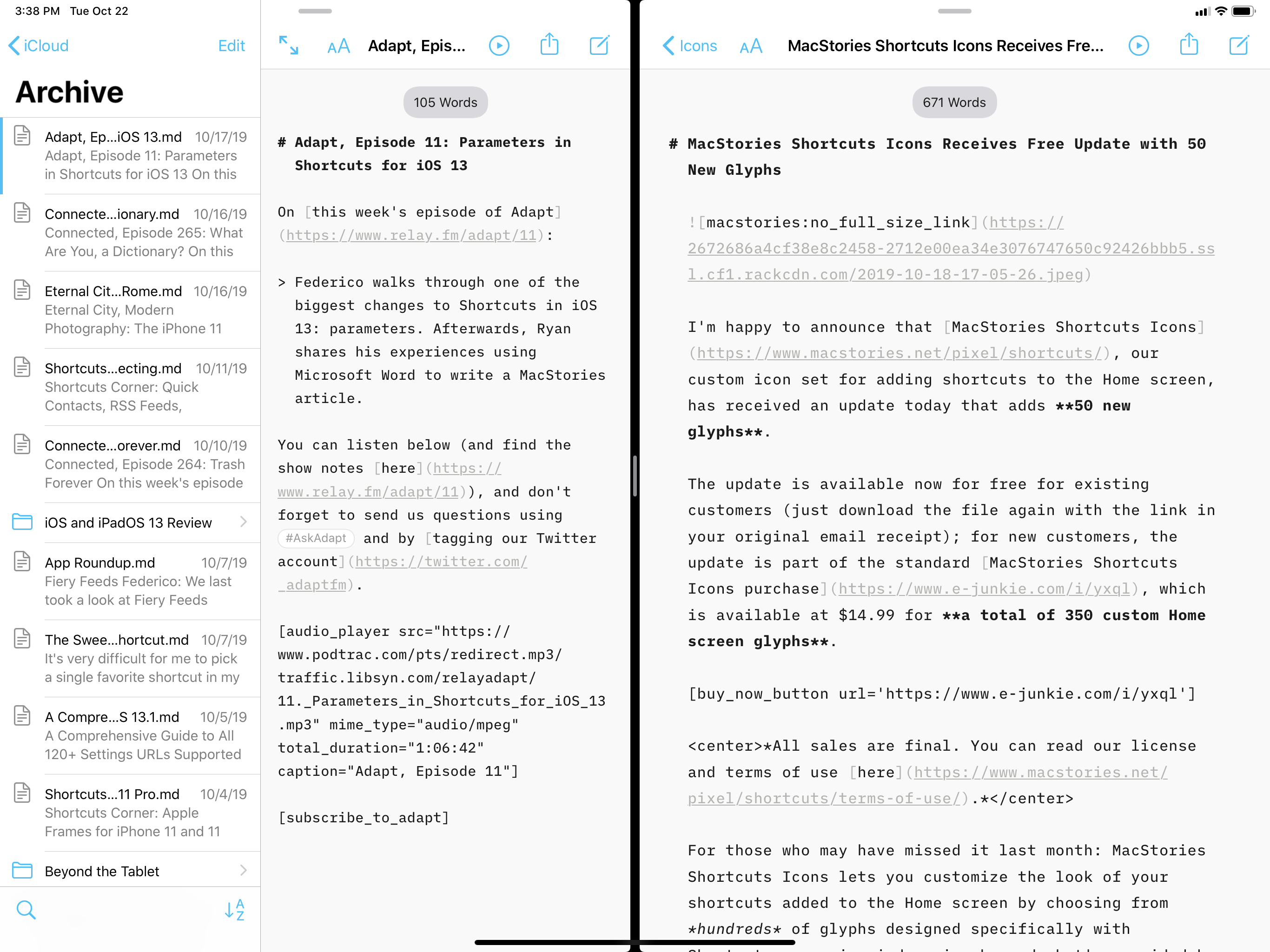 Unfortunately, like several other iPadOS 13 apps we’ve covered so far, iA Writer currently doesn’t let you open the same document in multiple windows. If you try to do that, the app will present you with an error message explaining that the document is already open elsewhere: 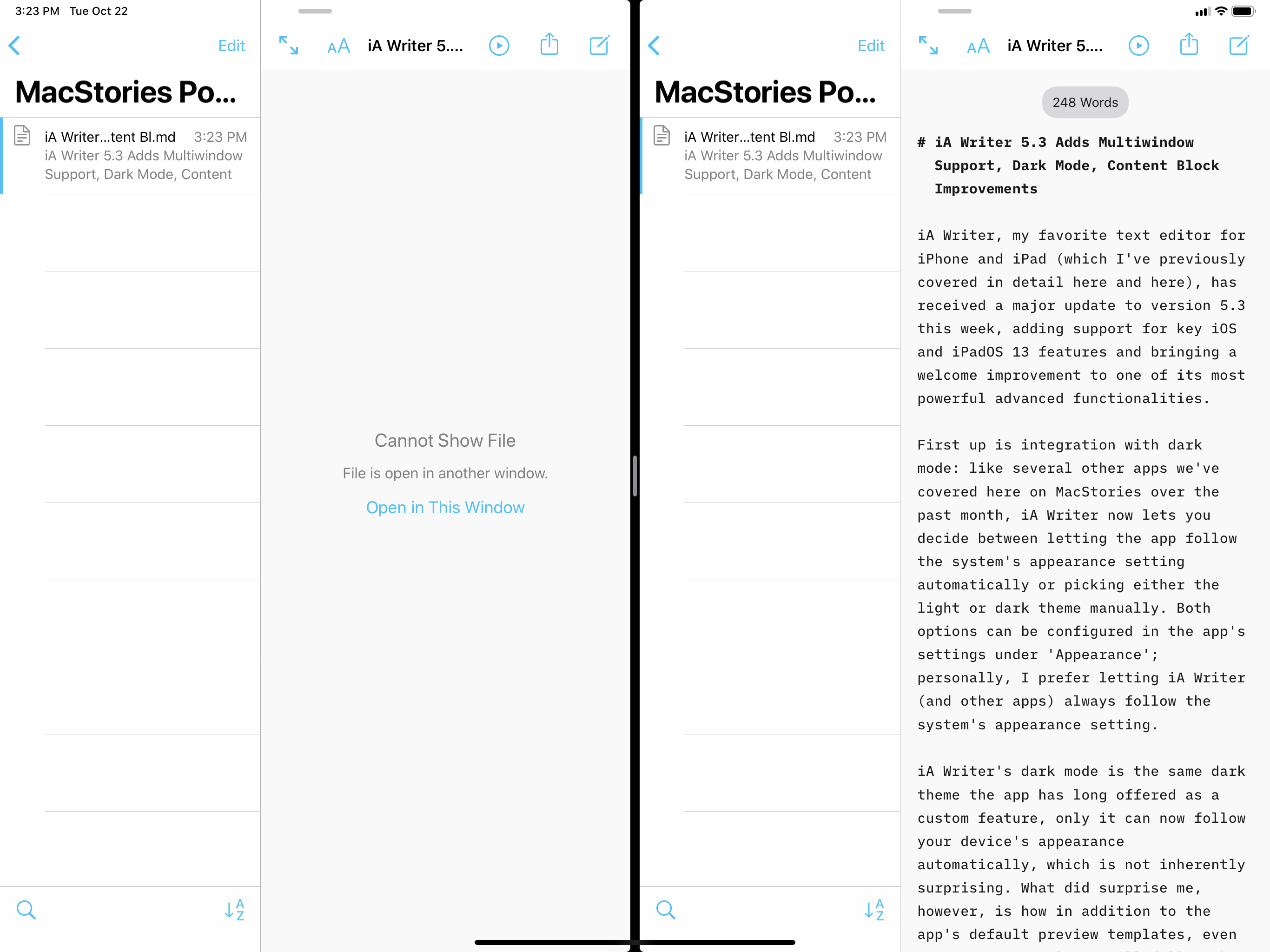 The app lets you move the selected document back to the current window, which is a helpful option I’d like more document-based apps to implement, but, ideally, I’d very much prefer to open the same document across multiple instances of the app.

As a consequence of this limitation, it’s not possible to edit a document in one window and preview it in another. This is one of the best features of the latest Ulysses update for iPadOS 13, and I was hoping iA Writer would allow me to build the same setup, but sadly this isn’t supported right now. If only in a limited “preview-only” mode that doesn’t let you edit the same document in two different windows, I would love the ability to open a preview for the document I’m working on in a live-updating window on the side; this feature sounds like the perfect candidate for auxiliary windows restricted to one view at a time.

What iA Writer gets right about multiwindow is offering multiple ways to activate the feature. As is standard on iPadOS, you can open the app’s Exposé view and tap the ‘+’ button in the upper right corner to open a new window; alternatively, you can pick up the app’s icon from the dock and drag it to the side of the screen to open a window in full-screen, Split View, or Slide Over. iA Writer 5.3 complements these default options with the ability to open documents in new windows with context menus and keyboard shortcuts. In the sidebar, you can long-press a document and select ‘Open in New Window’ to open it as a new window next to the one in the current space (in Split View); if you’re using an external keyboard, you can create a new window with a new document with ⇧⌘N or – and this is my favorite touch – open Quick Search with ⇧⌘O, search and select a document with the arrow keys, and hit ⇧⏎ to open the selection in a new window. 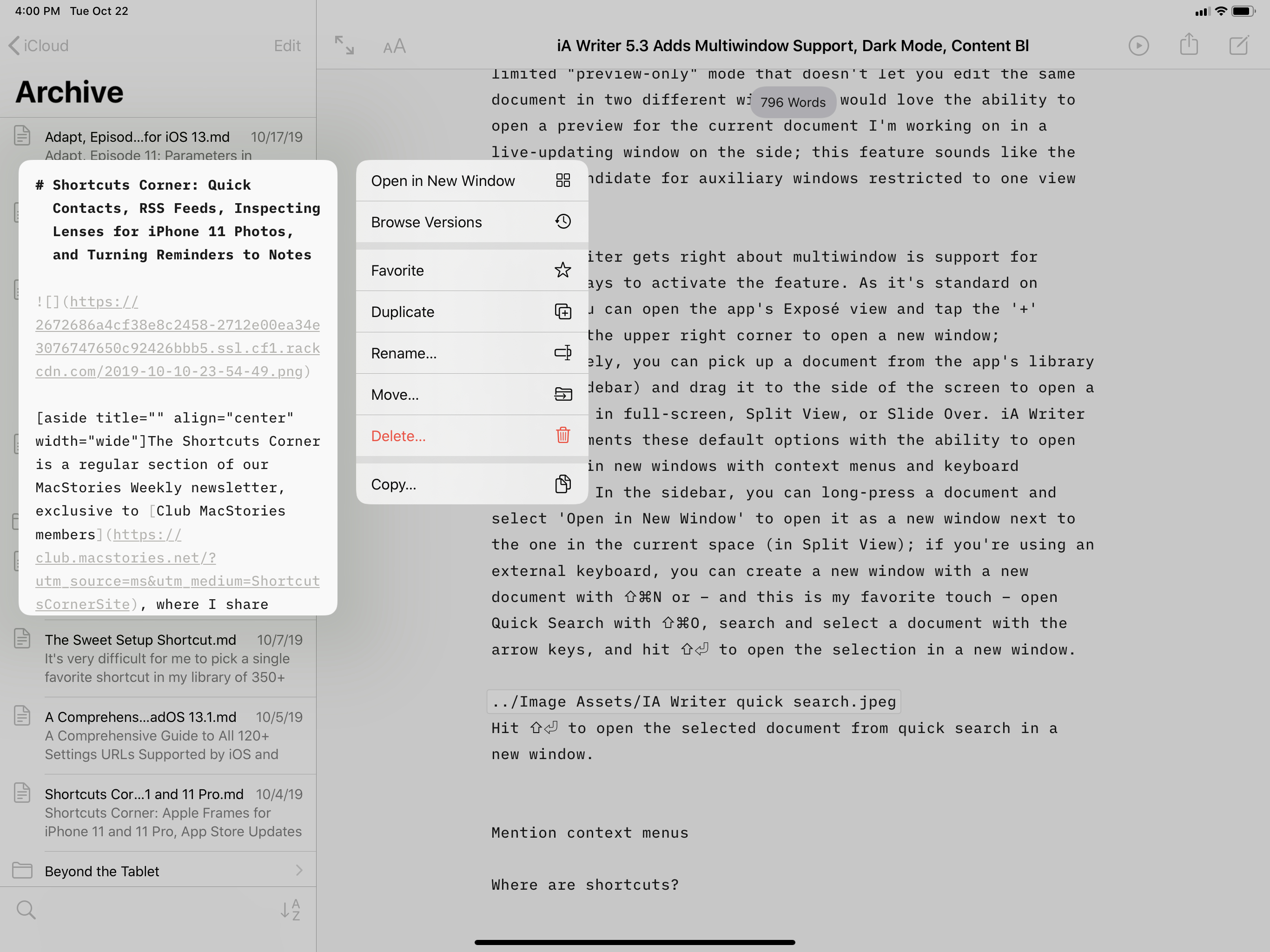 You can open documents in new windows from iA Writer’s new context menus. 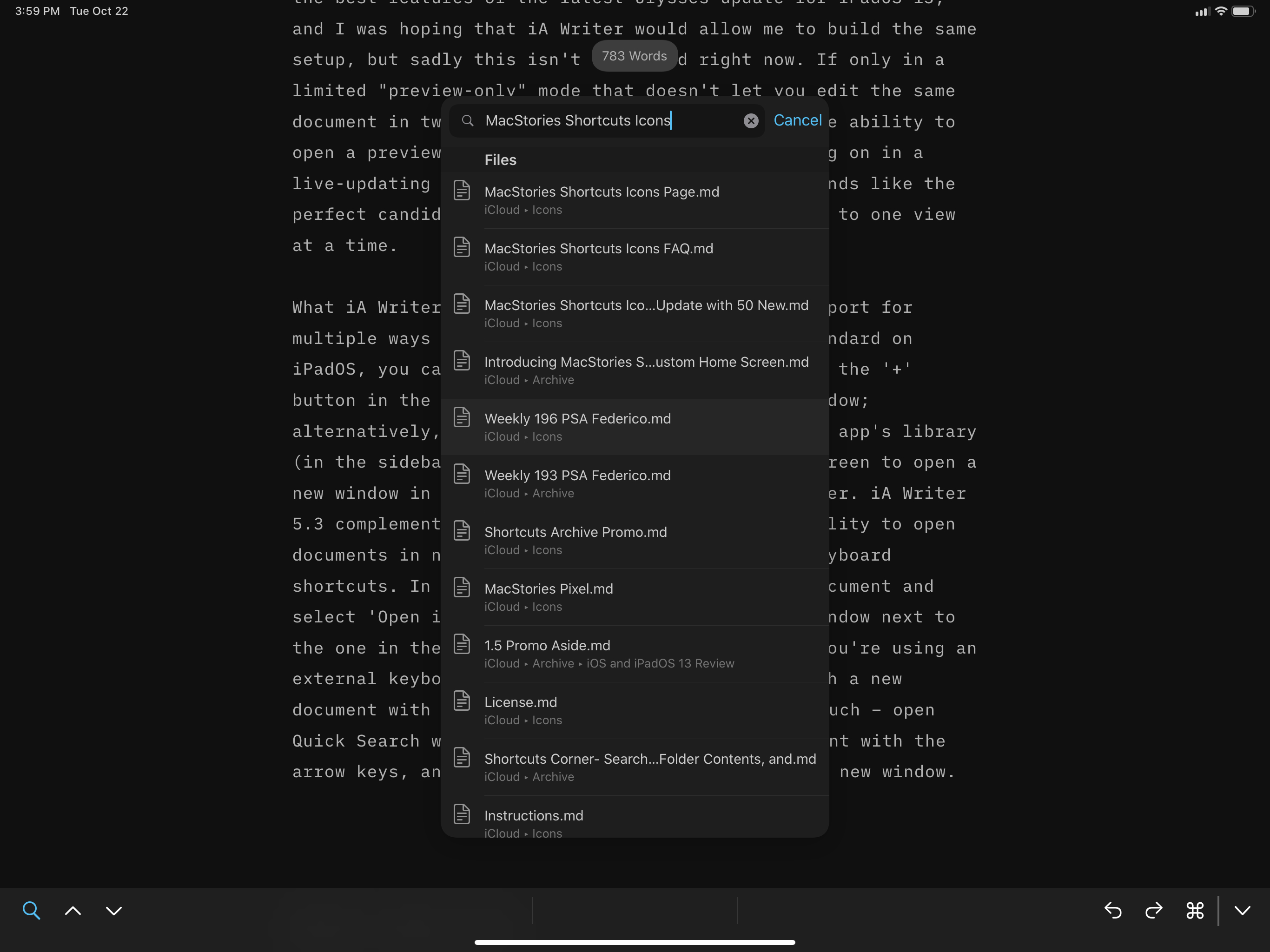 Press ⇧⏎ to open the selected document from quick search in a new window.

When I was working on my coverage for the first update to MacStories Shortcuts Icons last week, the ability to open multiple iA Writer windows came in handy: in one space, I kept a draft of my blog post, while in another I created a Split View for our product page and FAQ so I could edit both at the same time. I find the integration with the app’s quick search remarkable as it enables full keyboard navigation within iA Writer – an aspect of the iPad experience I’ve always pushed for more developers to adopt.

With this update, iA Writer has also added official support for a variety of other iOS and iPadOS 13 technologies. In addition to context menus (which have rightfully replaced the app’s old custom menus in the library), iA Writer now fully integrates with new gestures for text editing and document selection (you can read more details in this section of my review). Full-page capture is supported too as a way to quickly generate a plain text PDF of the document you’re working on: just take a screenshot, select ‘Full Page’ at the top of the screen, and share your document with other people or apps. I like this addition, but I’m surprised that the generated PDF always comes with a white background – it doesn’t respect the app’s dark mode setting.1 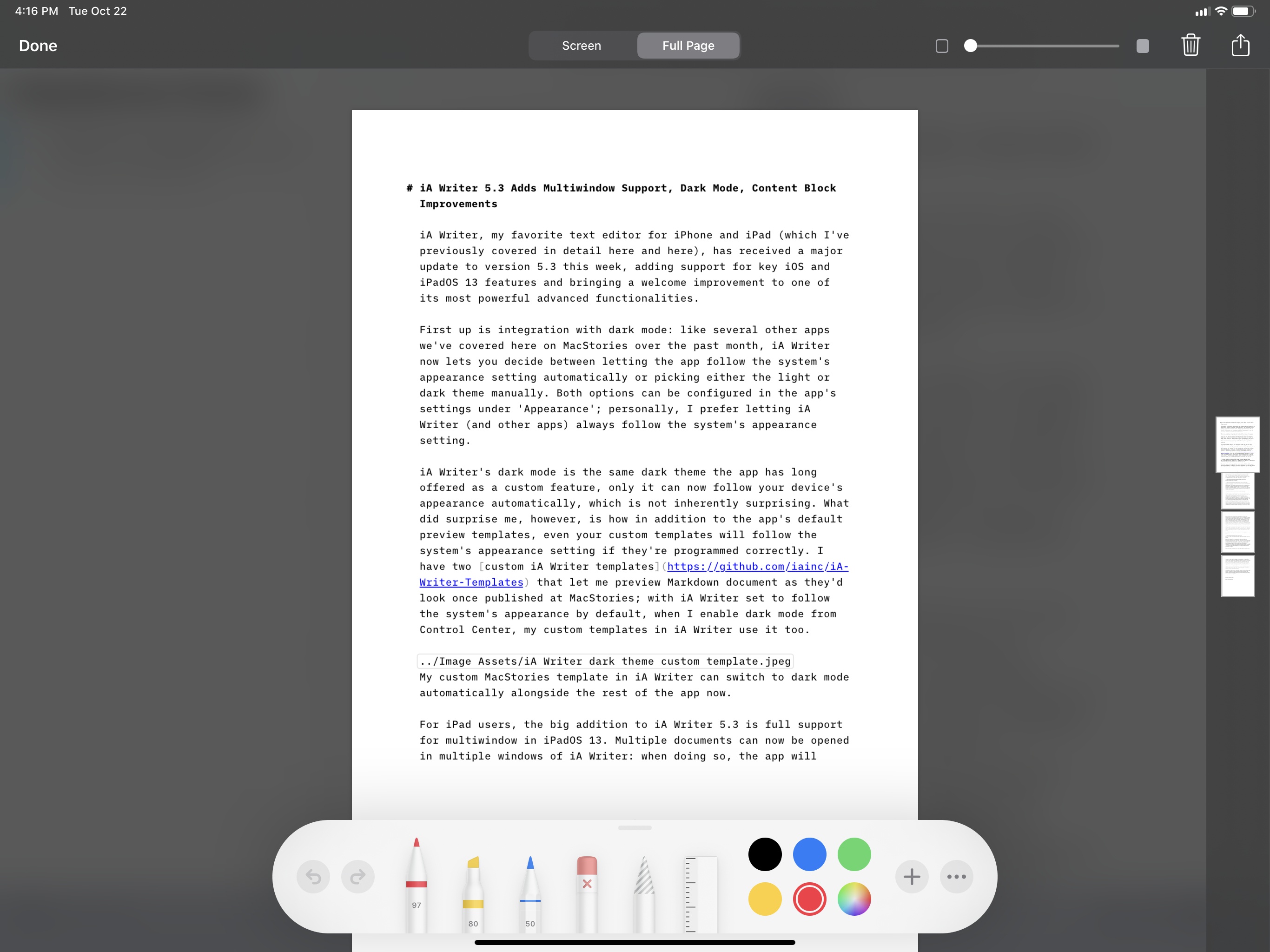 A plain text PDF generated with full-page capture on iPadOS 13.

Furthermore, thanks to its (existing) support for the native Files picker, iA Writer can now add external library locations for folders stored on external drives such as USB drives or SD cards – an advanced option I’d only seen implemented in Scriptable and Jayson before. I don’t think I’m ever going to rely on this functionality myself, but I’m glad it’s supported.

Lastly, I want to mention an improvement to content blocks in iA Writer 5.3. As I’ve explained before, I use content blocks extensively to insert references to local images stored in iCloud Drive when I’m editing a story in iA Writer. Thanks to content blocks, I can see what an article will look like with screenshots without having to upload them to my CDN first – a process I described in-depth in Issue 192 of MacStories Weekly for Club MacStories members. In older versions of the app, if you wanted to store files to reference with content blocks in a folder separate from your main ‘Documents’ one, you were forced to keep that folder within the same directory you were working on. My iA Writer articles are stored in iCloud Drive/iA Writer/MacStories Posts/ and with the old app I had to keep my ‘Image Assets’ sub-folder inside the ‘MacStories Posts’ one. It was an acceptable compromise, but I didn’t like having to see that folder intermixed with my documents.

In iA Writer 5.3, the content blocks syntax has been updated so you can now reference files from a parent folder. As you can see from the screenshots below, screenshots for this article were stored in a folder called ‘Image Assets’ located outside of ‘MacStories Posts’, which I can now reference with the following syntax:

A file from iCloud Drive (left) used as a content block in iA Writer.

iA Writer 5.3 is one of the best iOS and iPadOS 13 updates we’ve seen to date, and I’m especially impressed with the app’s approach to multiwindowing and external keyboard integration. The one feature that is obviously missing for now is native support for the new Shortcuts app with actions based on parameters: iA Writer still relies on x-callback-url commands for automation, and version 5.3 of the app doesn’t include any native Shortcuts actions to create or retrieve documents. My hope is that iA Writer will eventually match Drafts and Ulysses with actions to create documents, append content to existing files, and search the app’s library for documents matching specific criteria. As I argued in my iOS and iPadOS 13 review, it’s time for apps to move past URL schemes and embrace the far more advanced, secure, and reliable automation framework enabled by Shortcuts.

Hopefully, we won’t have to wait long for iA Writer to be deeply integrated with Shortcuts, following in the footsteps of other text editors we’ve covered over the past few weeks. In the meantime, iA Writer 5.3 is a solid update, and it’s available on the App Store.