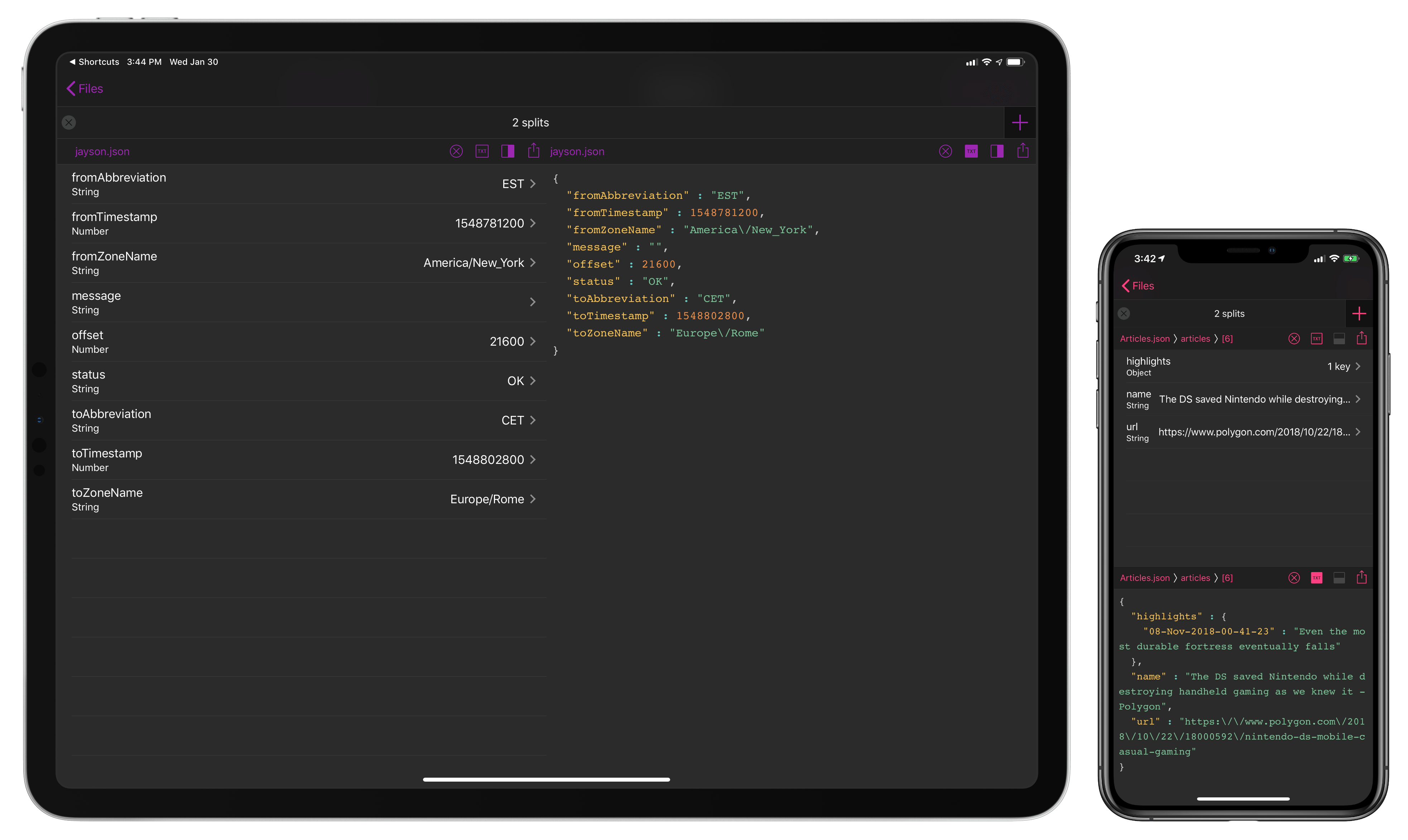 In writing about Workflow (then) and Shortcuts (now) for a living, at some point I realized that if I wanted to build more complex shortcuts to either deal with web APIs or store data in iCloud Drive, I had to learn the basics of parsing and writing valid JSON. The format is behind most of the web API-based Shortcuts I have shared here on MacStories1 and is one of the techniques I recently explained on Club MacStories when I built a shortcut to save highlights from Safari Reading List. The beauty of JSON is that, unlike XML, it’s cleaner and more readable – provided you have a dedicated viewer that supports syntax highlighting and/or options to navigate between objects and inspect values. There’s no shortage of such utilities on macOS, but this is the kind of niche that still hasn’t been fully explored on iOS by developers of pro apps. That changes today with the launch of Jayson, created by Simon Støvring.

Readers of MacStories may be familiar with Støvring’s name – he’s the developer behind one of the most powerful and innovative pro apps of 2018, the excellent Scriptable for iOS. For this reason, it shouldn’t come as a surprise that Jayson, a project that was born out of Støvring’s personal frustration with the lack of a modern JSON viewer for iOS, has that same spark of innovation and integration with native iOS functionalities that set Scriptable apart last year. If you do any kind of work with JSON on your iPhone or iPad, you need Jayson in your life, and here’s why.

END_OF_DOCUMENT_TOKEN_TO_BE_REPLACED

Fascinating deep dive by Craig Morey on whether it’s possible for a front-end web developer to get their work on an iPad Pro in 2018.

It’s a highly technical read, and ultimately Morey doesn’t believe an iPad Pro is ready for this task yet, but it’s worth pointing out that many of the issues outlined by Morey are applicable to anyone who uses an iPad as their primary computer today. For instance, the problem with Files APIs, introduced in iOS 11 and still not widely adopted by third-party document-based apps:

I’ve already posted about the messy landscape of options for moving and accessing files in iOS. The only way apps should be doing it currently is with iOS 11 style file APIs, but many apps have either legacy file solutions, bespoke (ie, confusingly different — and differently-abled) file pickers or would rather pull you into their own cloud platform.
[…]
Apple need to evangelise the right way to do this before basic file management turns off the potential users before they get to the inspiring parts of iPad usage. But to really make it work, app developers need assistance to update older apps to the latest APIs. Many app devs spent huge amounts of time building custom solutions before any good options existed, only to see little in terms of revenue to encourage them to rewrite their app as new APIs came along. The iPad Pro marketplace needs to be turning a corner in terms of viability to bring these apps back into the modern iOS world.

Make sure to watch the videos in Morey’s piece – I love how he detailed every single step of the workflows he tried to build on his iPad Pro.

Apple is rolling out a new TestFlight feature which enables developers to share a public URL for an app beta. Customers can simply open the link on their iPhone or iPad and automatically enroll into the beta testing group through the TestFlight app.

This feature was announced back at WWDC in June but has only just started showing up for developers inside the App Store Connect interface. Previously to public links, developers had to manually ask people for email addresses and then send out invite in emails to each person individually.

As someone who’s routinely testing dozens of apps for review purposes, this sounds a lot more convenient than the current email-based invitation system, both for developers and users. By default, developers don’t see the names and emails of users who sign up with a link. I have a feeling this option is going to be frequently used for public betas with large pools of testers.

Paul Miller, writing for The Verge, argues that Swift Playgrounds, while an amazing tool to learn the fundamentals of coding and Swift, ultimately doesn’t let kids build real apps:

The Swift Playgrounds fantasy of what ARKit is like is closer to an ad than a tutorial. I’ve actually worked on an app using Apple’s ARKit and SceneKit APIs directly. I got stuck when my API call to Apple’s sound playback system wouldn’t work, despite all my best efforts at debugging. Writing software with Apple’s APIs is a powerful but difficult practice, and Swift Playgrounds’ penchant for hiding true complexity makes it hard to recommend for someone who doesn’t want to just “learn how to code” but instead wants to build something.

I agree with Miller. I’ve been crossing my fingers for an iPad version of Xcode ever since the first-generation iPad Pro in late 2015. From aspiring programmers who would have a chance to see their creations on the iPad’s Home screen (without using a Mac) to developers who could create commercial iPad software on their own iPads, the iPad needs Xcode. If coding is as important as learning a language, the lack of Xcode for iPad is like not having a keyboard to express our thoughts. 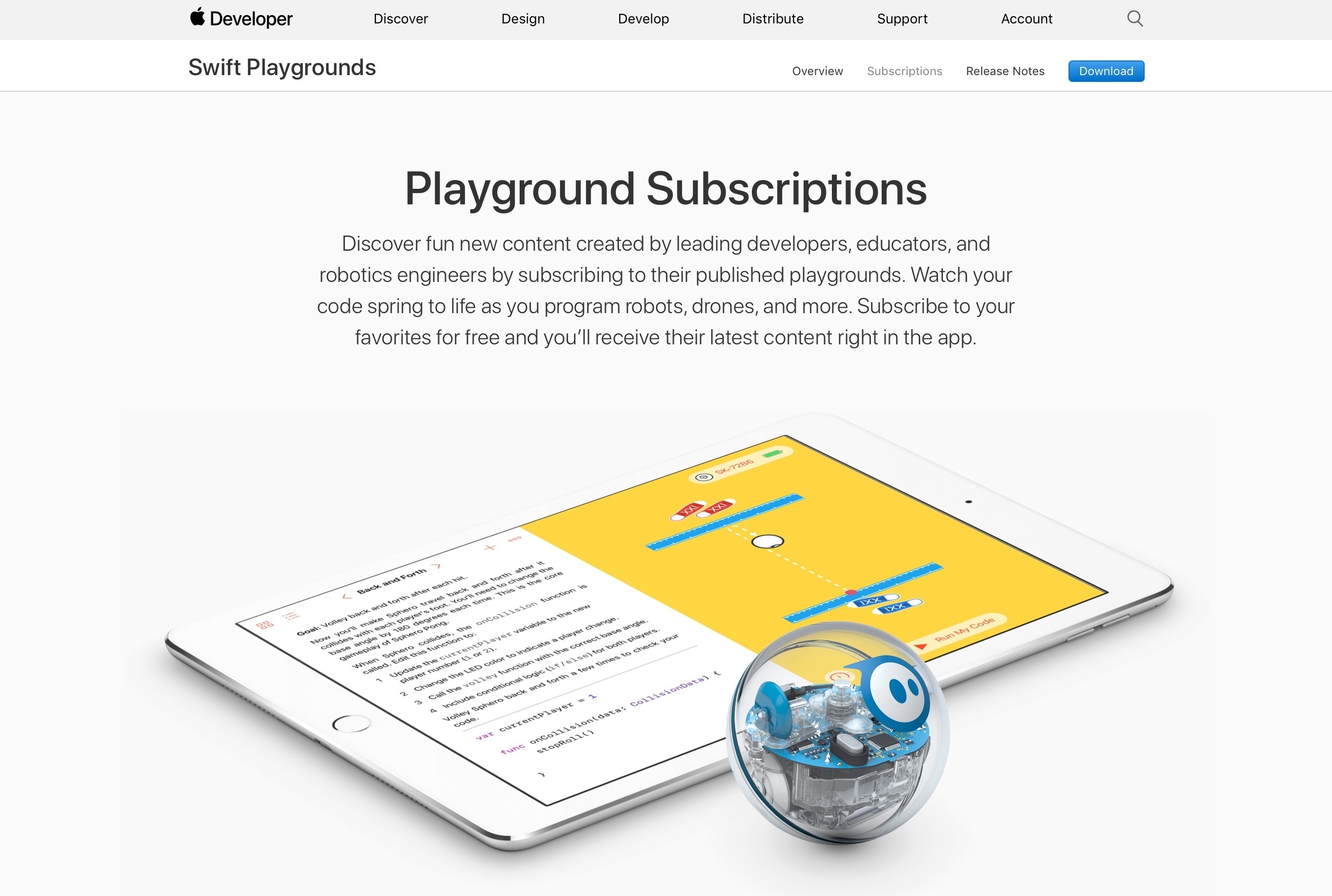 Apple has released version 2.0 of the Swift Playgrounds iPad app. The app provides an interactive learning environment for the Swift programming language. With version 2.0, Apple has introduced subscriptions to playgrounds from third-party creators. According to Apple’s developer news site:

You’ll automatically see new and updated playgrounds in your subscriptions, a content gallery that shows all playgrounds in a single view, new robots, and much more.

Subscriptions can be added by entering a URL or by browsing a gallery Apple has created, both of which are accessible from an ‘Add Subscription’ button in the top right-hand corner of the screen from which you add new playgrounds. As of publication, the buttons for adding subscriptions from the gallery do not work, but they should soon. When updated playgrounds are available, you can receive a notification too. Among the first third parties with subscription-based playgrounds are Sphero, Lego Mindstorms, UBTech, Parrot Drones, IBM, Mekamon, Wonder Workshop, and Skoog.

In addition to subscriptions, the update includes enhanced documentation for the Swift programming language and iOS SDK, and playgrounds can be opened from the Locations button in the Files app.

There are a seemingly endless number of ways to represent colors. Whether you’re a professional designer or developer, or someone who just wants to update a website template, you’ve undoubtedly come across several. The trouble with so many different formats is that it guarantees that at some point, the color value you have won’t be the one you require. Aquarelo is a beautifully-designed new Mac app that cuts through the thicket of formats to help you find the colors you want and convert them to the format you need.

END_OF_DOCUMENT_TOKEN_TO_BE_REPLACED 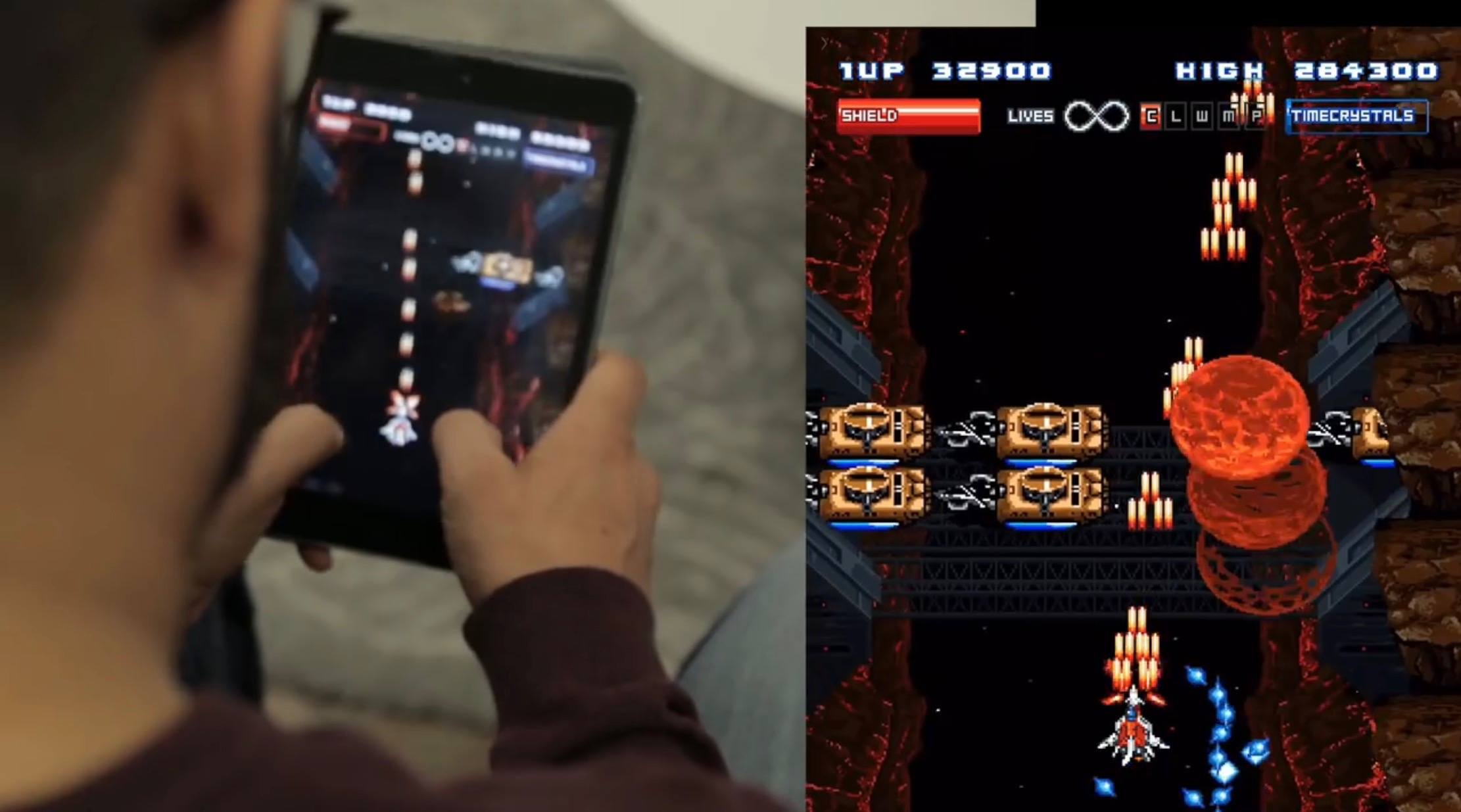 In a series of tweets yesterday, one of the developers behind Codea announced that a new version of the iPad coding app had been approved for release, and this update would enable code sharing for the first time.

Previously we covered the revised App Store guidelines that now permit downloading and executing code inside of apps, but we haven’t seen those changes put into practice before now. With version 2.3.7 of Codea you can now import projects from both .zip files and .codea bundles, making it easy to share code with others.

We’ve been trying for six years (six!) to allow code sharing on iPad. So glad Apple has updated their policy now.

Although Codea is the first prominent adopter of features made possible by Apple’s newly-granted permissions, it certainly won’t be the last. Other notable programming apps and IDEs like Pythonista and Continuous can follow suit as they so choose. These policy changes, combined with Apple’s own entrance into iOS coding via Swift Playgrounds, all of the sudden make iPad a much more attractive programming environment than ever before.

One excellent example of the power of coding on iOS is a game called Starsceptre. Starsceptre is a retro-style arcade shooter that was coded entirely on an iPad using Codea. Creator Richard Morgan wrote the game primarily during his daily commute on a train. “My work commute is basically the only spare time I have, so I needed a way to make games in that time – on the move, on my iPad.” The game’s trailer is embedded below.

With the less restrictive new App Store policies on coding, and the upcoming power user iPad features in iOS 11, hopefully we will see a lot more examples of apps coded entirely on iPad going forward.

Apple made several changes to the App Store Review Guidelines during WWDC this week, including an easing of the prohibition against downloading and executing code on an iOS device. The ban on executable code remains intact, but rule 2.5.2 now also provides that:

Apps designed to teach, develop, or test executable code may, in limited circumstances, download code provided that such code is not used for other purposes. Such apps must make the source code provided by the Application completely viewable and editable by the user.

The change to the guidelines is limited, but it’s an important signal to third-party developers that Apple will accept certain educational apps and developer tools on iOS, which brings the promise of app development on iOS one step closer to reality.

Last fall, Dash, a popular iOS and macOS developer documentation app by Kapeli, was pulled from Apple’s Mac and iOS App Stores amid allegations of fraudulent reviews and Kapeli’s Apple developer account was terminated. Since then, Kapeli has continued to sell Dash for macOS outside the Mac App Store. With no way to sell the iOS version of the app outside the iOS App Store, Kapelli open-sourced the code for the app.

According to Kapeli, open sourcing Dash for iOS has led to numerous people submitting it to the App Store in violation of its GNU GPL license. In an attempt to slow down the rate of copycat apps appearing to the App Store, Dash’s developer, Bogdan Popescu, announced in a blog post today that he created a personal developer account with Apple and submitted Dash for iOS to the App Store. The app was approved and is now available as a free download in the App Store.