Mac Catalyst: The Next Wave 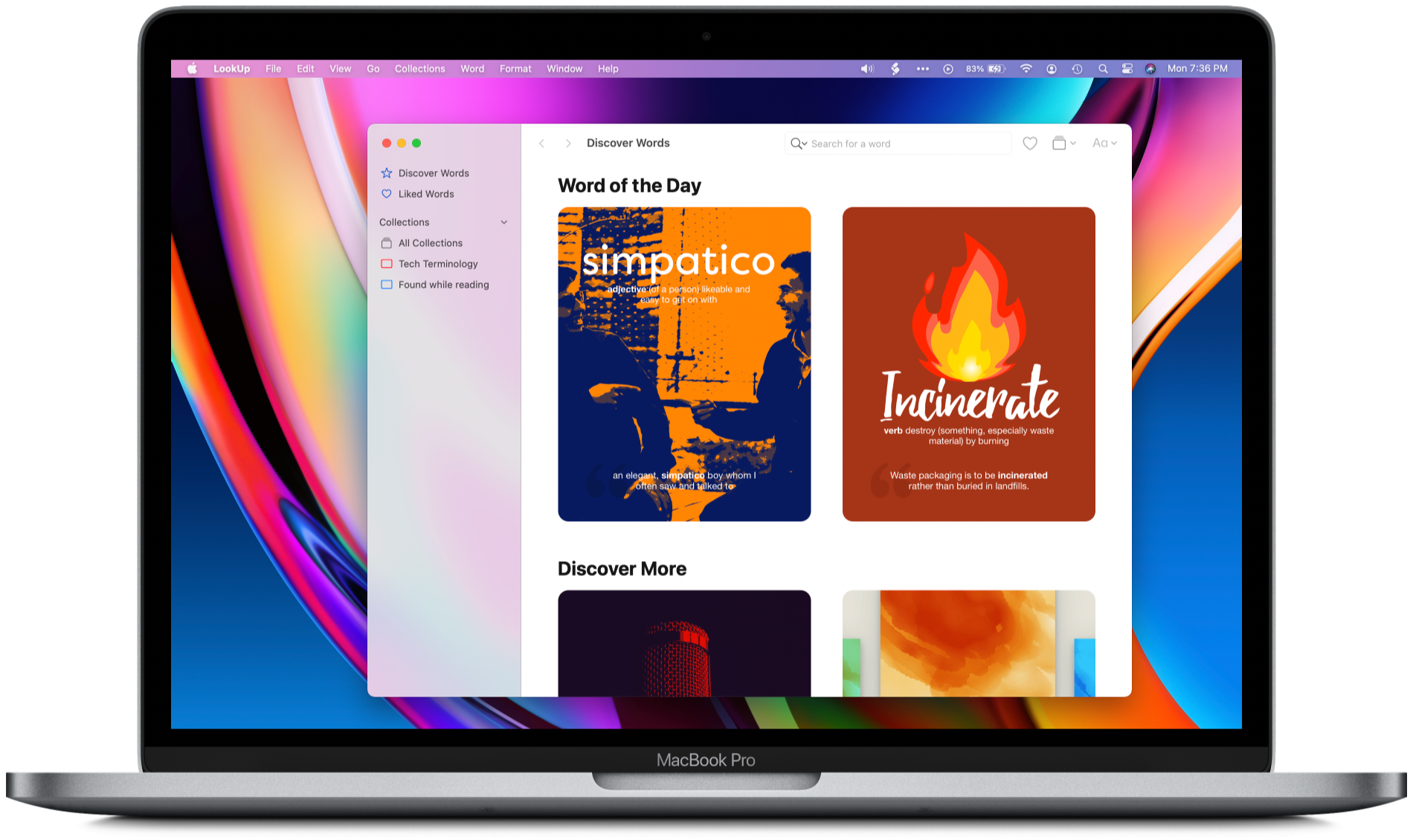 When I wrote about the latest Mac Catalyst advances in July, I had a sense that they would make a big difference to app developers outside Apple. It’s still early days, but I’ve already seen several apps that have benefited from Optimized for Mac.

Before sharing those apps, though, I want to make a brief detour to address an issue that has grown from an irritant to a full-blown problem with Mac Catalyst: the lack of TestFlight on the Mac. It’s been more than six years now since Apple acquired TestFlight. Apple’s beta testing service and app have been terrific ways for developers to manage large groups of beta testers, ensuring that their apps are vetted before being released to the general public. Yet, despite Mac Catalyst and Apple’s drive to make Mac development more streamlined for developers and rumors, not a word has been said about bringing TestFlight to the Mac.

Of course, there are other ways to beta test Mac apps, but in an environment where Apple is trying to sell developers on the notion that it’s easier than ever to bring an iPad app to the Mac, the lack of TestFlight is a glaring omission. There are also lots of gotchas for developers who want to distribute notarized versions as betas but can’t because features like Sign In with Apple require distribution through the Mac App Store. Having worked with frustrated developers who want to share their Mac Catalyst apps, it’s painfully obvious that this needs to be fixed as soon as possible if Apple hopes to attract more iOS and iPadOS developers to the Mac.

However, despite the ongoing bugginess of Mac Catalyst and the difficulties developers have sharing their betas, I’ve had the chance to try a few Mac Catalyst apps, and my cautious optimism from July has been rewarded. A handful of apps doesn’t establish a trend, but things appear to be headed in the right direction. 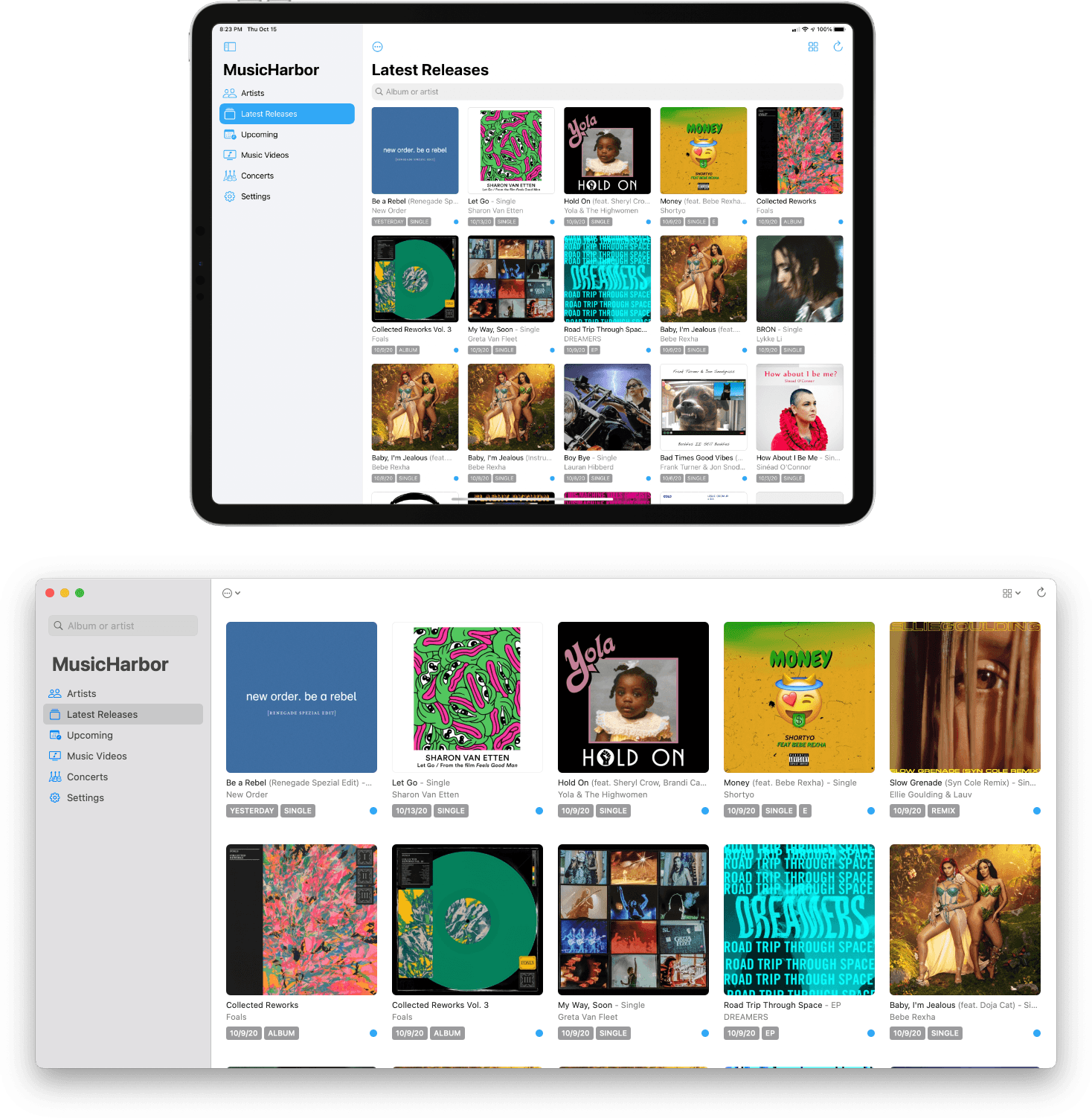 MusicHarbor on the iPad and Mac bear a very close resemblance to each other.

MusicHarbor is one of my favorite music utilities on the iPhone and iPad. Feed it with the artists in your Apple Music library, and MusicHarbor will track the latest and upcoming releases. It’s become a sort of RSS reader for music releases for me. I browse through the album art of new albums throughout the week, dropping things that look interesting into a playlist in Apple Music that serves as my ‘Listen Later’ service.

Not long ago, I covered the details of the latest iOS and iPadOS release of MusicHarbor, so I won’t go over it all again, but suffice it to say, in the year since its release, the app has become my most-used music utility on the iPhone and iPad. It was the version that was redesigned for iPadOS 14 that set the stage for bringing MusicHarbor to the Mac by adopting the iPad’s new sidebar design and a collection view for its content.

MusicHarbor’s new design works equally well on the Mac. The sidebar is a natural fit for navigating between the app’s sections, and album art smoothly resizes along with the app’s window. MusicHarbor is also a terrific example of the sort of app that I’m glad has made its way to the Mac from the iPhone and iPad. I listen to music all day long as I work, so I’m always looking for something new to try. It’s a small thing, but often that meant grabbing my iPhone to check MusicHarbor, even when I was at my desk working on my Mac. Now, however, I’ve got a quick, familiar option right where I’m already working that syncs the status of what I’ve viewed back to my iPhone and iPad, which I love for its simple efficiency. 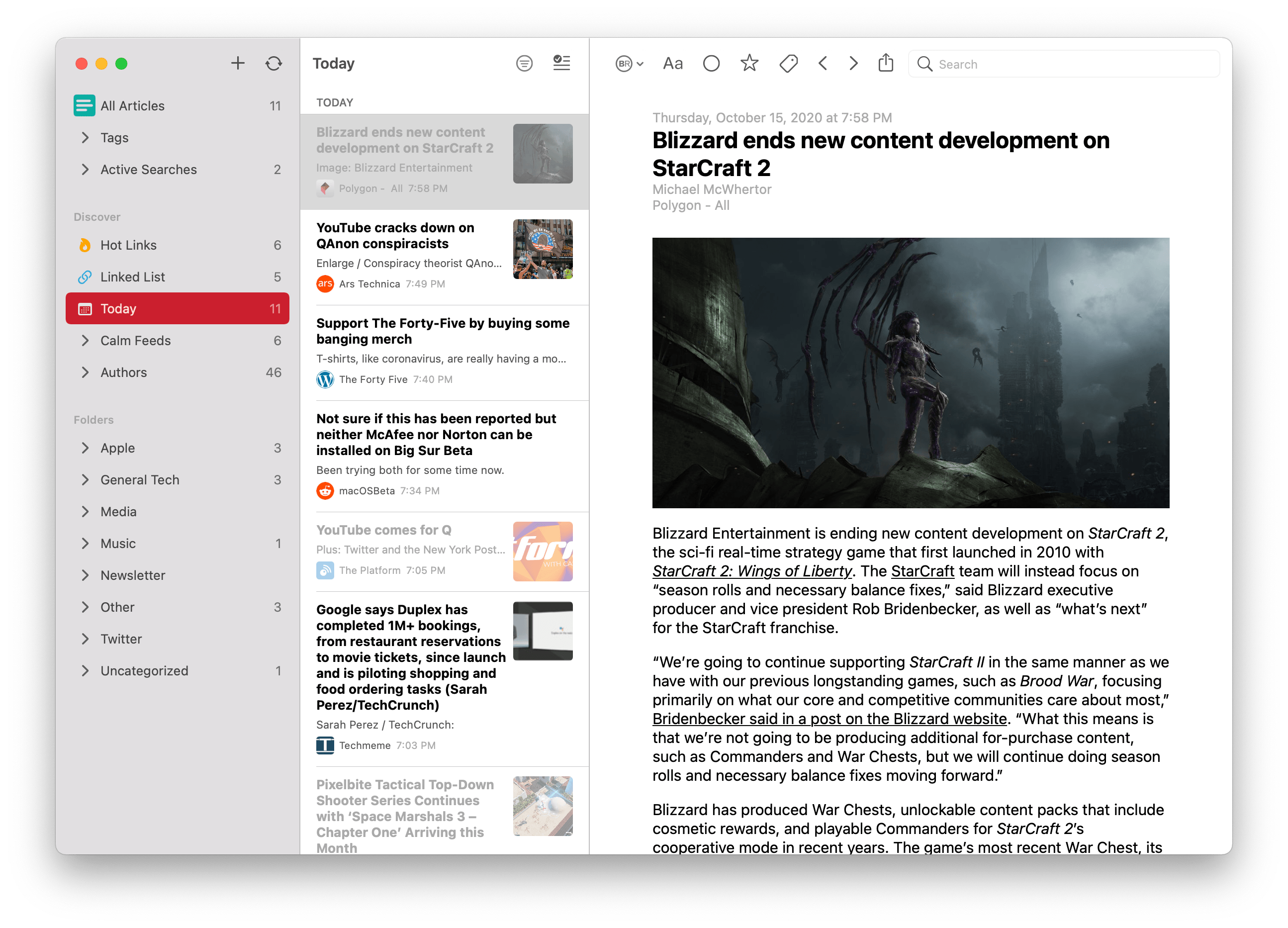 Another app I wrote about after iOS and iPadOS 14 were released is lire, which has long been one of my favorite RSS readers. Lire was also one of the first and most advanced apps to offer a Mac Catalyst version.

The latest iteration of lire takes advantage of Optimized for Mac with a familiar three-column layout, which is fully resizable, the use of collapsible sections in the sidebar, and a modern toolbar. Lire also makes greater use of color in the sidebar than most apps, using colorful iconography to highlight certain features. The app also makes use of tabs, allowing you to scan headlines and open multiple stories, which is a feature that I’ve not seen done with many other Mac Catalyst RSS clients. If you’re a fan of lire on the iPhone and iPad, the latest Mac Catalyst version is the best yet and well worth checking out. 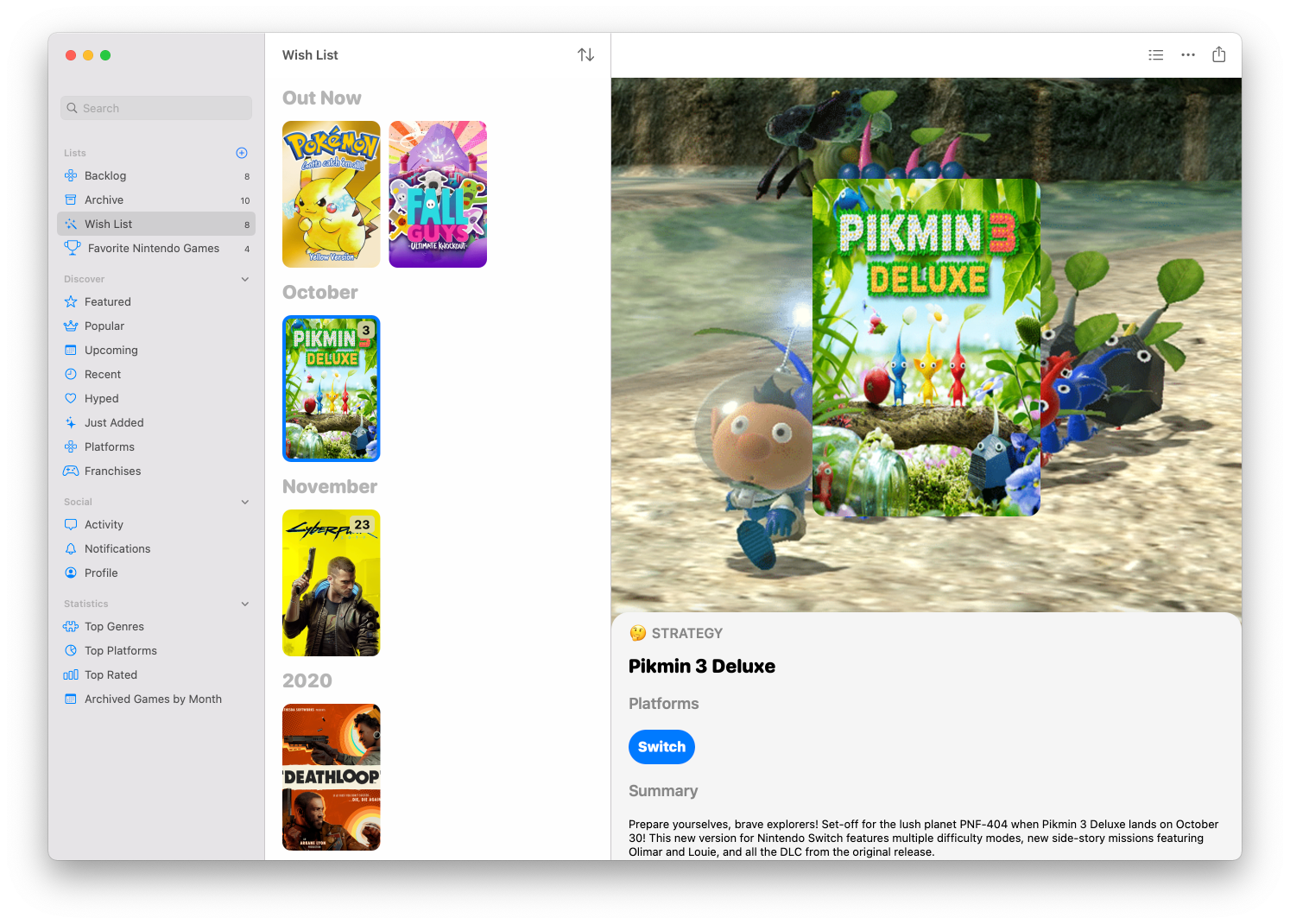 GameTrack comes to the Mac.

GameTrack, the videogame tracking app, is another excellent example of an app that I use most often on my iPhone or iPad, but one that I’m glad has made it to the Mac too. Again, it all comes down to context. If I’m on my Mac and looking for a videogame to buy, I shouldn’t have to interrupt my browsing in Safari to look up the games in my ‘Wish List’ queue in GameTrack on my iPhone.

Instead, I can simply launch GameTrack, scan through the games on my Wish List, and make my purchase. My hands never leave the keyboard, and my gaze never strays from my Mac’s display. That may seem trivial, but every context switch is an opportunity to get distracted. If I’m going to be distracted, it should be on my terms and on purpose when I’m ready to unwind and play that game I just bought.

GameTrack is a terrific example of how well the new sidebar design works on both the iPad and Mac.

I reviewed the iPhone and iPad version of GameTrack earlier this year, and it remains the primary way I track the videogames I’m playing and want to play. The app does an excellent job breaking down the games on your lists and offering several ways to discover new ones too. That makes GameTrack a perfect match with the new iPadOS and Mac sidebar, which allows users to collapse sections they aren’t using for a more streamlined experience. 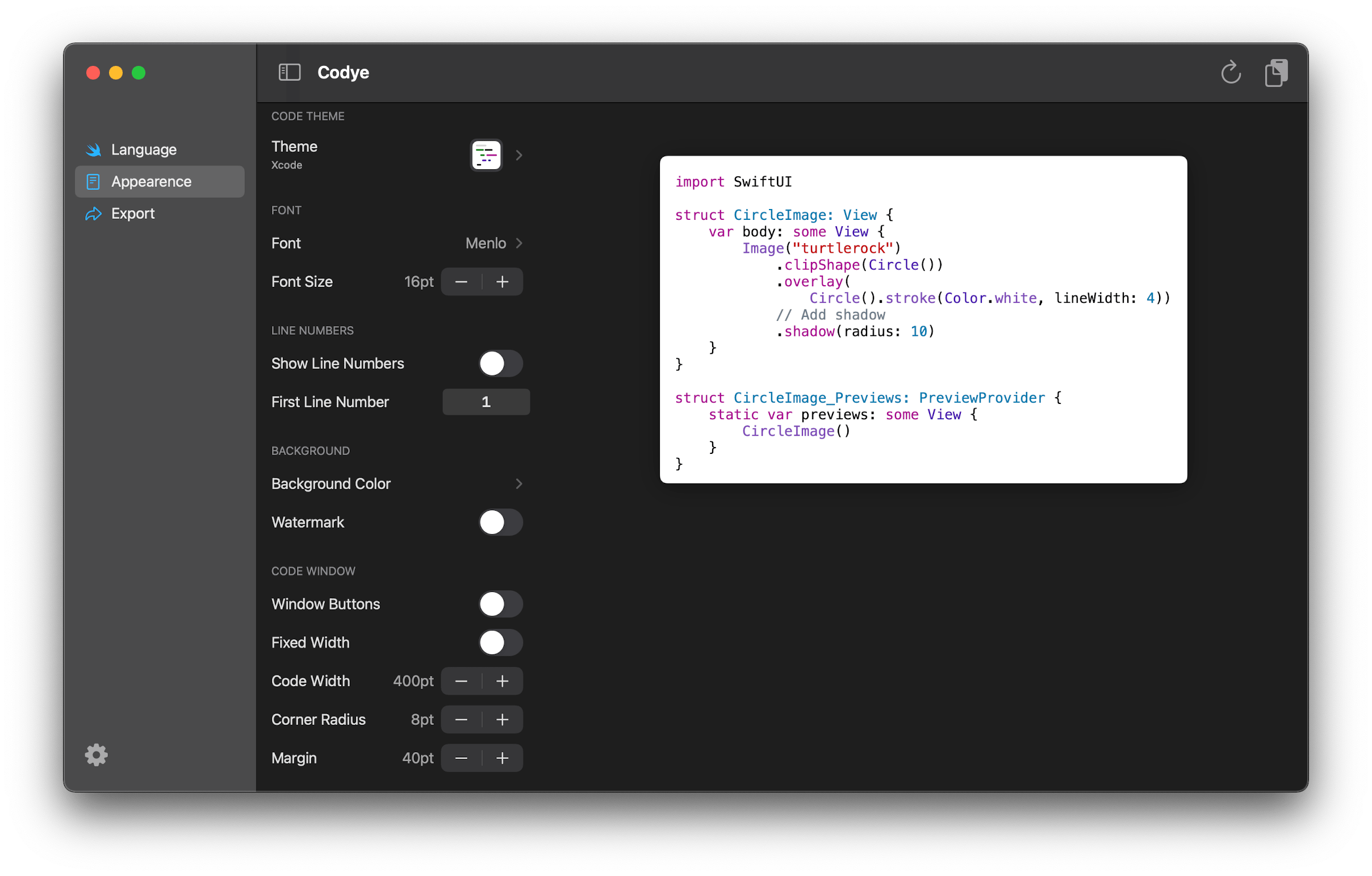 Codye and its new multicolumn layout.

Codye lets users convert code snippets into high-resolution, beautifully-formatted images for use in presentations, documentation, and other places where legibility is important. The app adopts a three-column layout with the app’s three primary modes in the far left column, settings for each mode in the second column, and an editor/viewer in the far right column. The app includes a long list of themes, syntax highlighting, and export options. The new column layout works particularly well for a utility app like Codye, making it easy to switch between modes and access the app’s many options quickly while benefitting from the immediate feedback available in the viewer.

Apple has tried to revitalize the Mac App Store and jump-start Mac app growth before with things like the store’s redesign. The results have been uneven because there were too many barriers to entry for iOS developers, and the Mac market is small compared to iOS.

Developers and users are right to ask if this time will be different. I’m optimistic based on the scope of changes in Big Sur and Apple’s broader strategy for M1 Macs, but there are still significant hurdles. With the ability to run native iOS and iPadOS apps on M1 Macs, SwiftUI, and Mac Catalyst, both Optimized for Mac and not, there are options that should fit a variety of business models for existing and new apps. There remain obstacles such as the lack of TestFlight for the Mac and framework bugs, but overall, many of the previous business-model and technical issues have been resolved.

As I concluded in July, what’s exciting about Mac Catalyst is that:

…there’s an opportunity for developers to significantly increase the potential size of the market for their apps without taking much risk. Some of those new Mac Catalyst apps will be subpar, just like there are junky iPhone and iPad apps. I’m not a fan of lousy apps, but I’m still glad that the barrier to entry to the App Store is low. It opens opportunities for newcomers who might otherwise find it too hard to get started.

I expect Mac Catalyst will have the same effect. More developers than ever before have access to the Mac App Store. That will create competition that pushes all developers to make better products for their users, regardless of the underlying technology used to build it. In my book, that is how it should be and the best way to strengthen the Mac as a platform.

With hardware and software experiencing dramatic change at the same time, it’s not surprising that each of the many ways to build Mac apps is being closely scrutinized. However, I expect the moment we’ll know that the latest ways to build Mac apps have been a success is when people no longer think about how the app was created and evaluate it on its own merits instead.