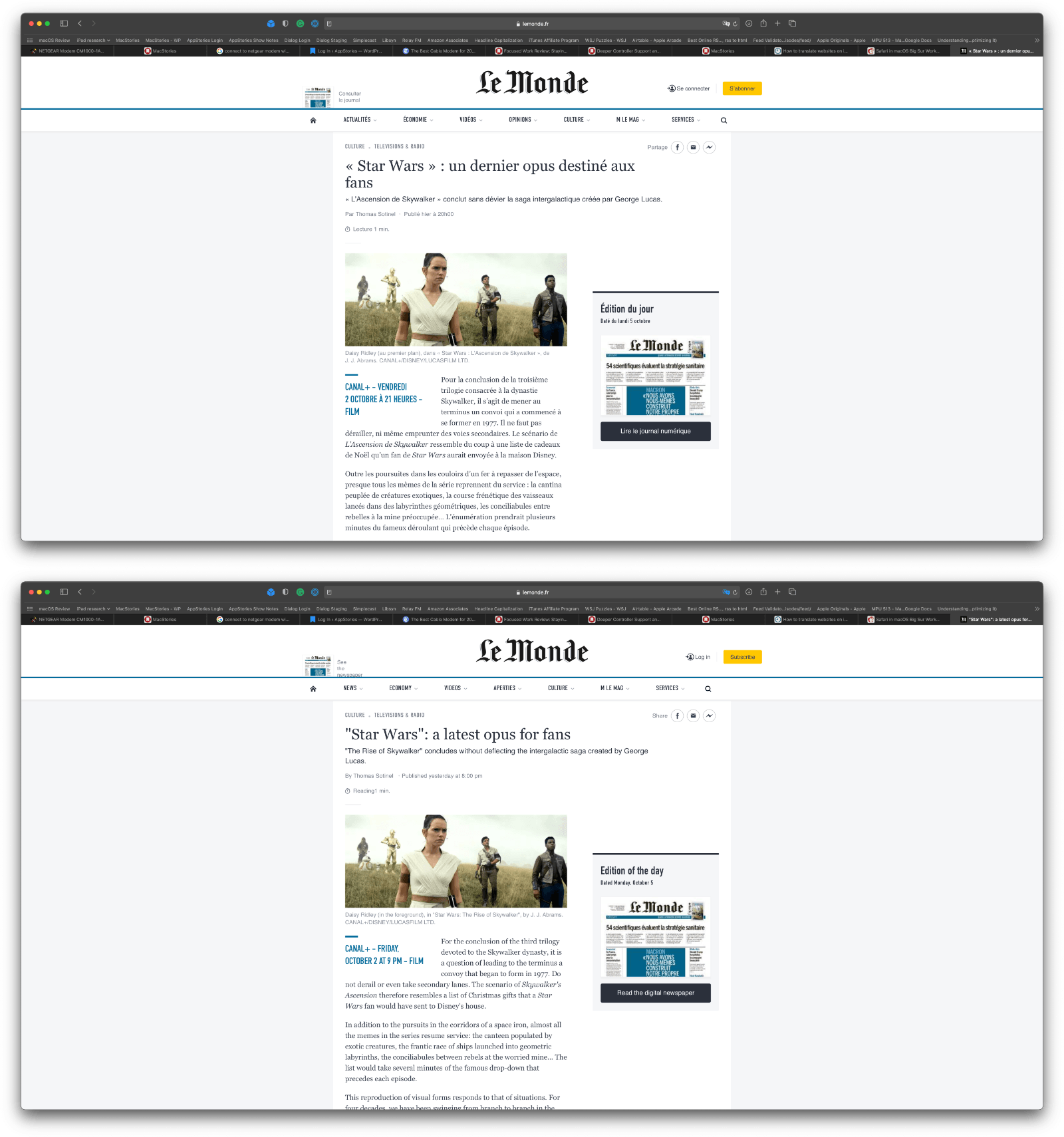 Translating an article from French to English in Safari.

Safari also adds a new webpage translation feature that Apple labels as a beta. The functionality is accessed from a translation button in Safari’s toolbar that automatically detects and translates sites in seven languages to your Mac’s default language. The languages supported are:

When you visit a site that supports translation, you’ll find a translation icon on the right side of the address bar that uses the same iconography as the Translation app in iOS and iPadOS 14. Clicking the icon reveals a few choices. Selecting ‘Translate’ translates the page into your preferred language. There’s also a ‘Preferred Language’ button that opens System Preferences to that section so you can change your language.

Once translated, the icon in the address bar becomes blue to indicate the feature has been enabled. Clicking on the icon again activates the ‘View Original’ option that is greyed out when you are on a site in its native language. The translation feature is also available from Safari’s View menu.

I don’t visit sites in other languages often, but in my tests, the new translate feature worked reasonably well. It’s not perfect, but it’s good enough to get a feel for what the author was trying to convey in their native language.

Big Sur has taken steps to expand the universe of available browser extensions in a way that doesn’t compromise Safari’s security. I’ve already covered the security aspects of extensions, but along with those restrictions come new ways that Apple is encouraging developers to create extensions and promote them. 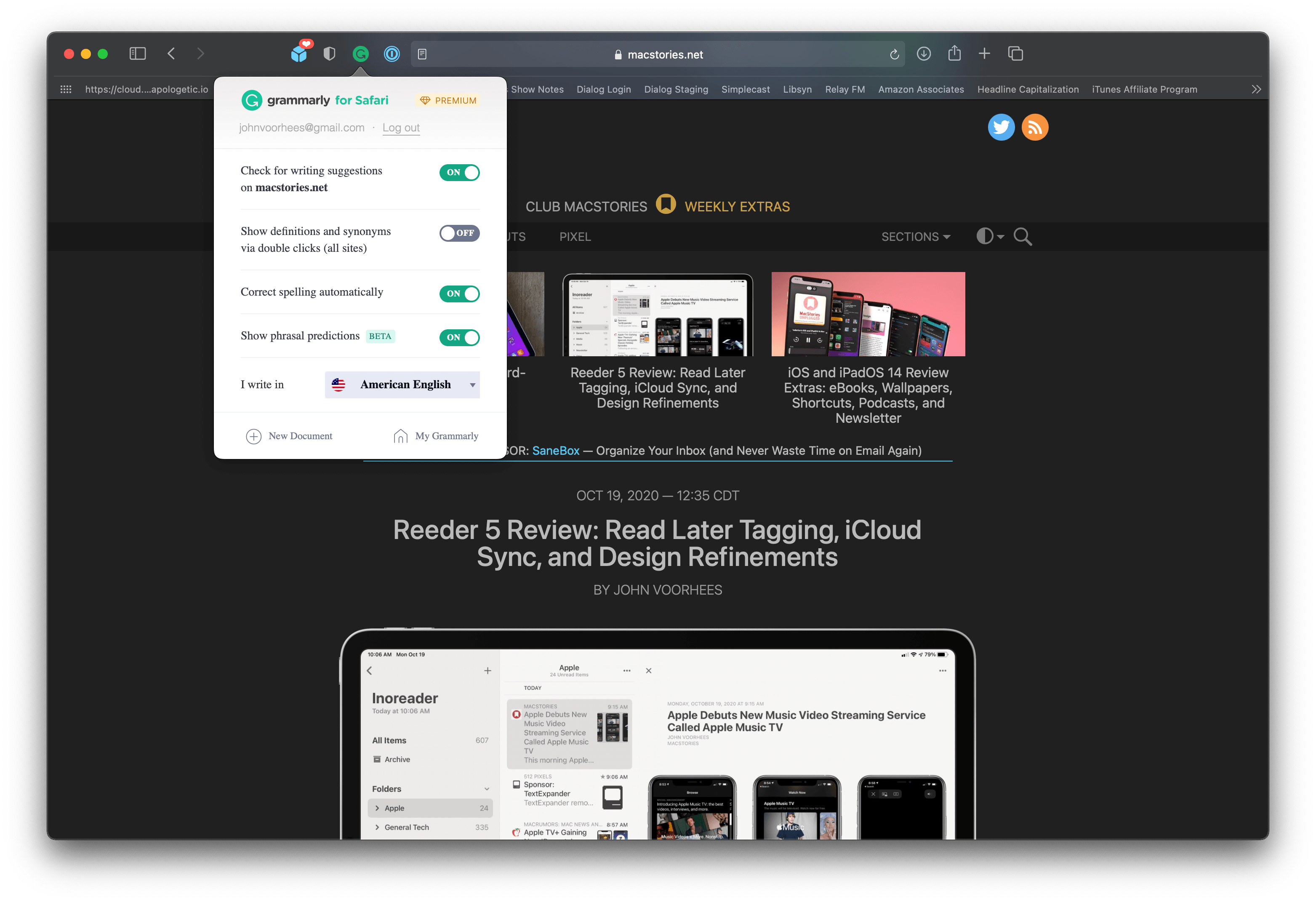 Extensions like Grammarly have colorful new icons in Safari’s toolbar.

Although the new tools are a significant step toward bringing the richer universe of extensions available for Chrome, Firefox, and other browsers, it’s worth noting that Safari extensions still require Xcode and a paid developer account before they can be built and distributed on the Mac App Store. Those requirements may not be an impediment to big companies like Grammarly or Evernote, but it may prevent smaller developers from bringing their extensions to the Mac. 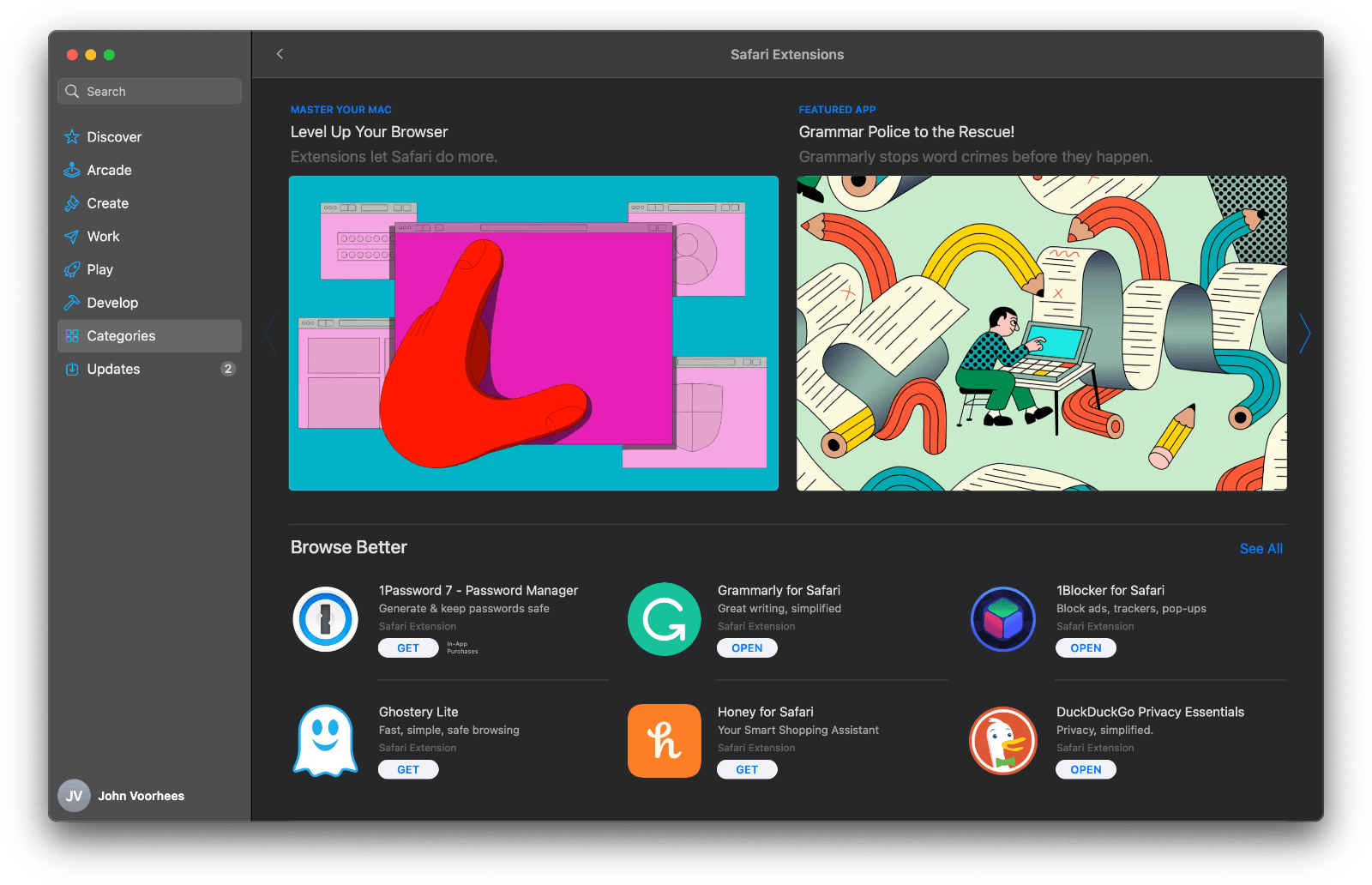 The Mac App Store has gained a Safari Extensions category.

The second piece of the puzzle unveiled at WWDC is a Mac App Store category dedicated to Safari extensions. It’s still early days, but the Store now has a category for extensions that includes editorial content highlighting certain types of extensions, top charts, and themed lists of extensions. I’m glad to see Apple provide a dedicated space for browser extensions and give them editorial attention. The change should help with discovery and put extensions on equal footing with apps in the minds of users. 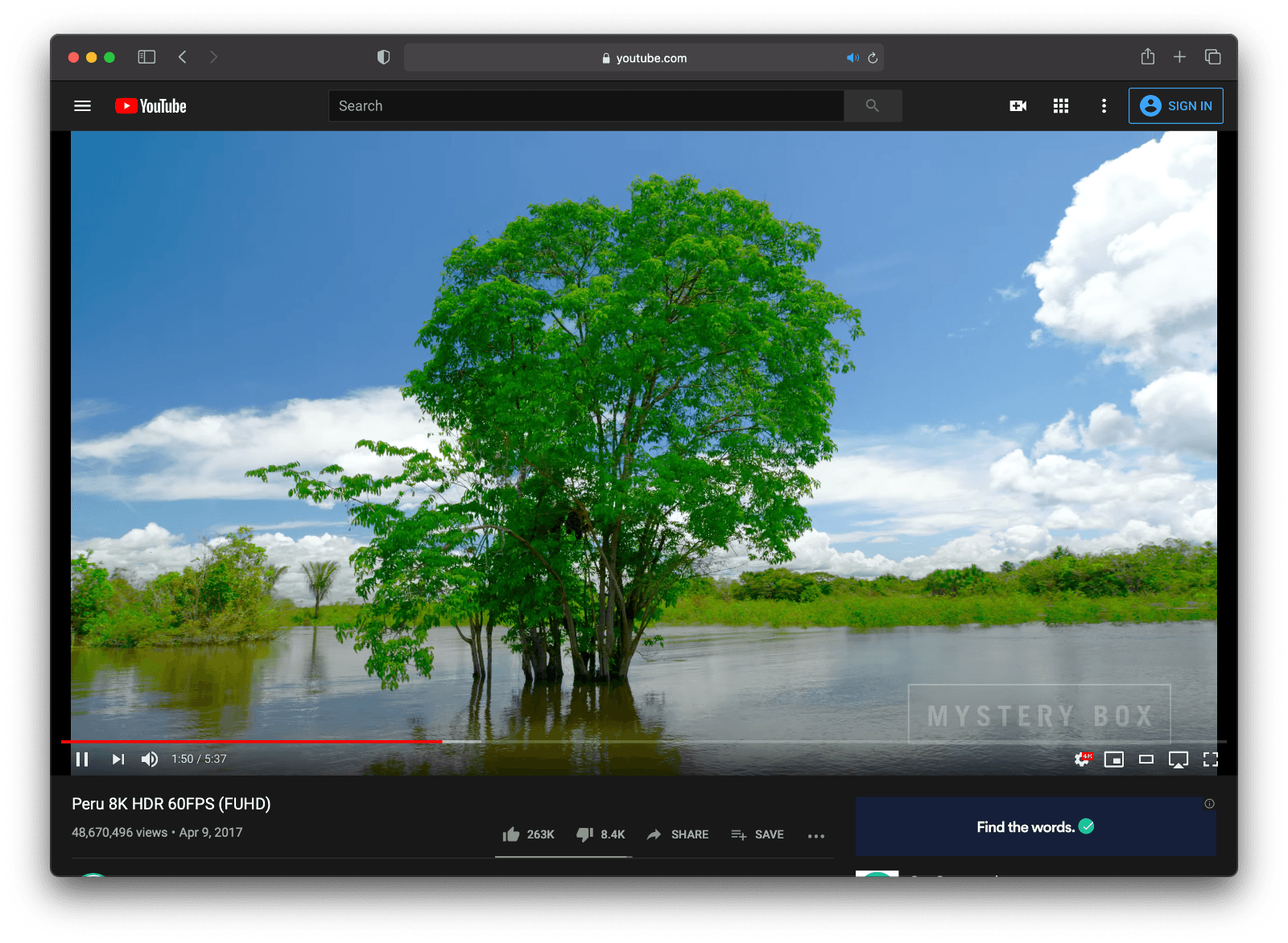 Safari running on Big Sur finally supports 4K HDR playback for sites like YouTube and Netflix. However, there are limitations imposed by content providers that sometimes limit when 4K video is available. For instance, 4K HDR playback of Netflix content is limited to Macs with T2 security chips, which means only the following Mac models introduced since 2018 will work with the video streaming service:

However, other services, like YouTube played 4K video on a broader range of Mac models, including my 2014 Mac mini.

The transition to 4K playback in Safari was rough during the betas. Although I was able to play a video at any resolution on my 2018 Mac mini, older machines struggled to cope, regularly returning errors preventing playback altogether. Because those issues persisted throughout the late beta stages, it’s not clear whether they have been completely resolved.

Support for Adobe’s Flash player, which was never supported on iOS devices, has ended with Safari 14. The change isn’t a surprise given Adobe’s announcement to end the browser plug-in in July 2017 and its omission from earlier Safari Technology Previews, but it is nonetheless noteable because it marks the end of an era that stretches back to the early 2000s.

It’s worth noting too that Safari 14 is available as a standalone download from the Software Update section of System Preferences, regardless of whether you have updated to Big Sur. However, the standalone version does not support website translation or 4K video playback, both of which require Big Sur. 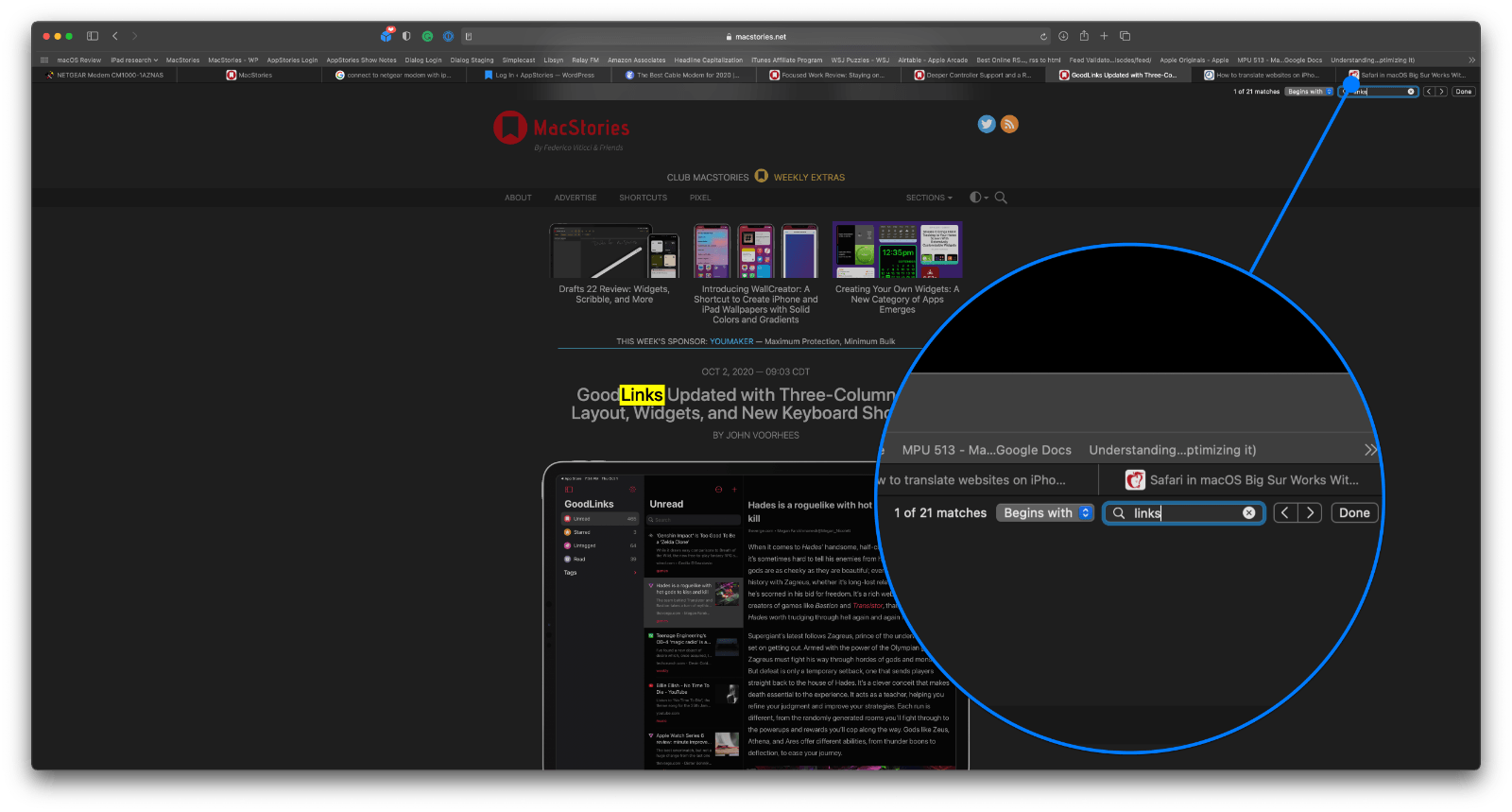 Safari’s Find UI has been updated to make it more discoverable.

The functionality of Safari’s Find feature, which searches the contents of a page based on a user-provided search query, isn’t new, but it has been redesigned to surface alternate ways of composing a search better. Previously, after typing ⌘F or the Find command in Safari’s Edit menu, you could click on the search icon to pick between searches that contained or began with your search term. That same functionality is available in Big Sur, but it has been elevated visually, so the type of search currently selected is visible and can be switched using the feature’s drop-down menu. It’s a small change, but I expect it will lead to the feature being discovered by far more users.

Safari can import passwords from Google Chrome now too.

A Note on Performance

Apple says that Safari 14 running on Big Sur can load pages 50% faster for commonly visited sites than Chrome can. The company also says that Safari can stream video for up to three hours longer than Chrome or Firefox, and users can spend up to one hour more browsing the web than on those competing browsers. What Apple hasn’t defined is what constitutes a commonly-visited site, which makes independent testing of those claims difficult. Also, battery performance during betas is often poor, which is to be expected as the operating system is fine-tuned. As a result, I’m not in a position to comment on Safari’s performance at launch.