There is far more media I’d like to try than I have time for. Between TV shows, movies, music, books and other reading, podcasts, and videogames, the supply of content far outstrips the time I have by an order of magnitude. As a result, I’m both picky and often slow to getting around to some media, especially games, which often require a substantial time commitment. The trouble is that it’s easy to lose track of games I’ve read about, that someone has recommended, and even those that I’m in the middle of playing if I can’t play regularly.

I’ve approached the problem in a lot of different ways. Text notes are a quick and portable solution but lack detail. Apps designed to track lots of different kinds of media have the benefit of consolidating everything in one place, but often don’t accommodate features specific to one kind of media. As a result, I’ve recently gravitated to apps that focus on just a single type of media. For videogames, that solution has been GameTrack, an app that we’ve covered in our Club MacStories newsletters in the past.

The app’s tab bar is divided into four sections: Lists, Discover, Activity, and Statistics. GameTrack comes with three default lists: Backlog, Archive, and Wish List. If you subscribe you can add more lists, including ranked lists which are a fun way to pick your favorite games for a system, genre, or franchise. Backlog can be further divided into Now Playing, Play Next, and Collection, and Archive into Finished, Completed, and Abandoned. Wish List is organized by release date and can send you notifications when the games listed there become available. You can pick the platform you’re playing on when more than one is available, and games on your lists can be sorted and grouped based on multiple criteria too. 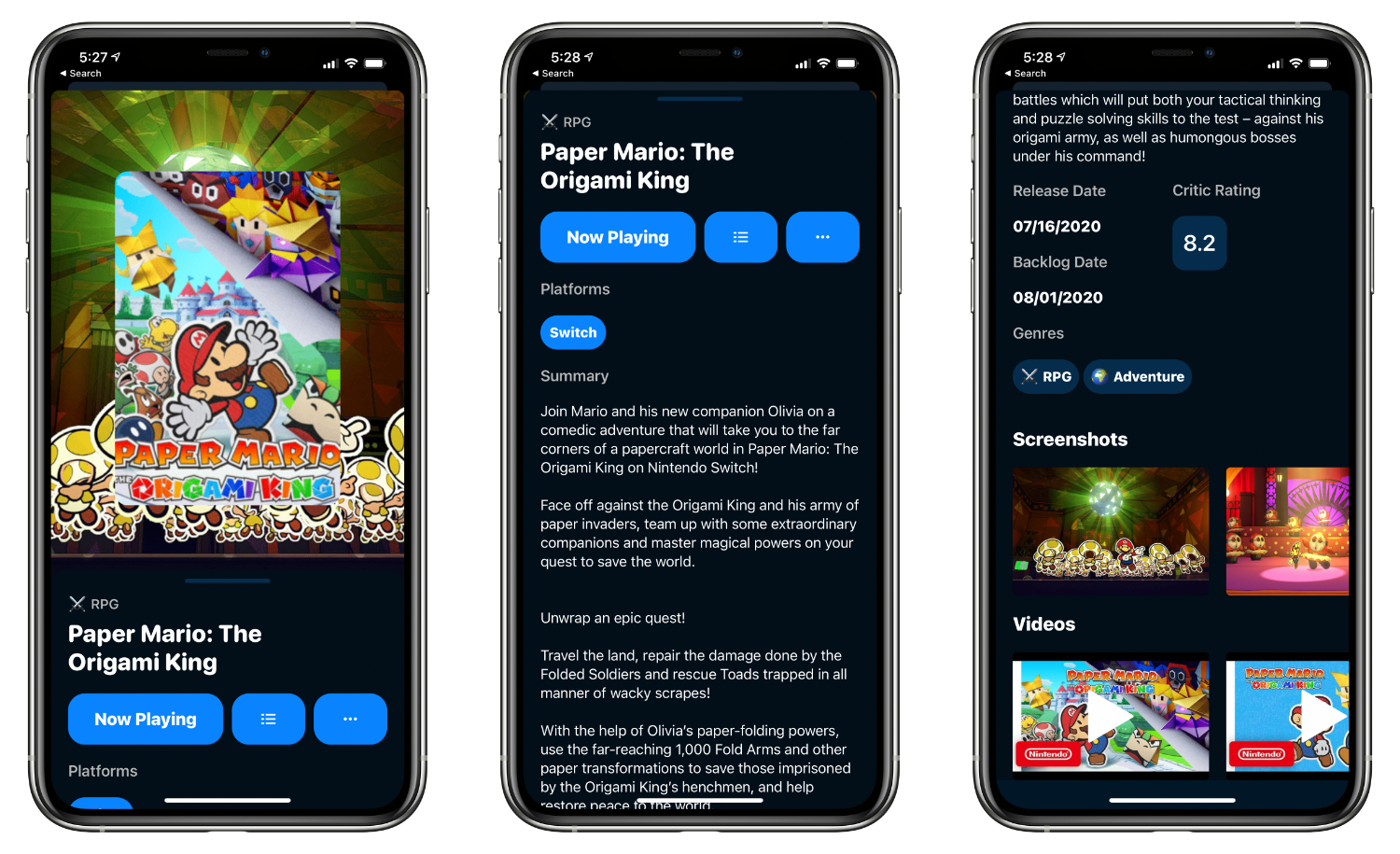 Each game’s entry includes details drawn from the IGDB database and rich artwork.

Each game in a list includes a summary of it pulled from the IGDB database, screenshots, trailers, ratings, release date, genre, critic rating, and other metadata. GameTrack lets you move items between lists and customize entries with alternate artwork from a game’s detail view. You can also specify a completion percentage and take notes, which is a handy way to save a URL of a game’s review, leave reminders to yourself about what you want to do next in a game, or remember who recommended it. Editable metadata is also accessible from a context menu when you long-press on a game’s artwork. I only wish that URLs saved in notes were links that would open in Safari View Controller so I could view them easily in-app. 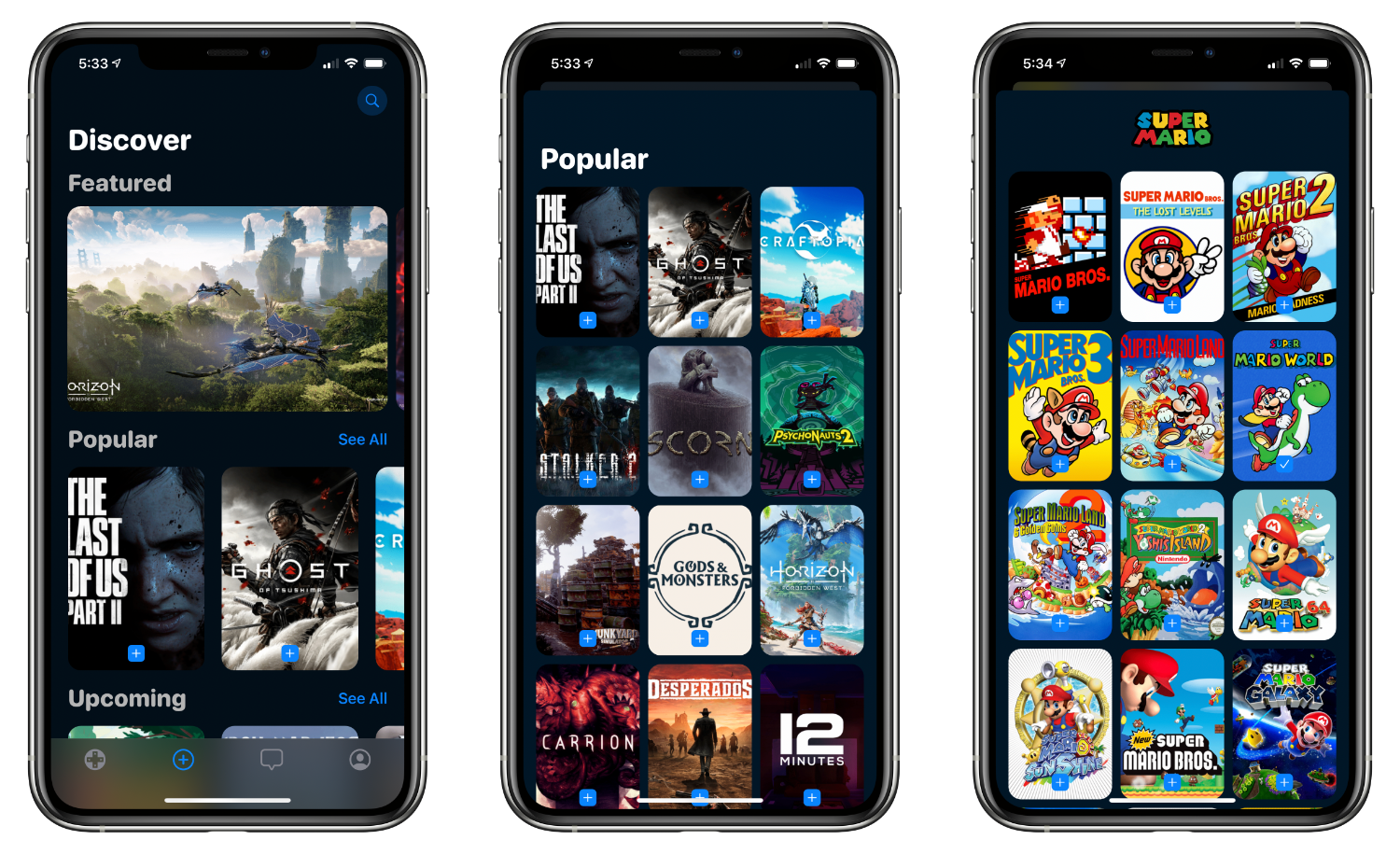 The Discover tab is a terrific way to browse games.

The Discover tab allows you to browse games in the IGDB database in categories like Featured, Popular, Upcoming, Recent, Hyped, and Just Added, as well as by platform and a handful of popular franchises. You can also search for games that you want to add to your lists from this tab. 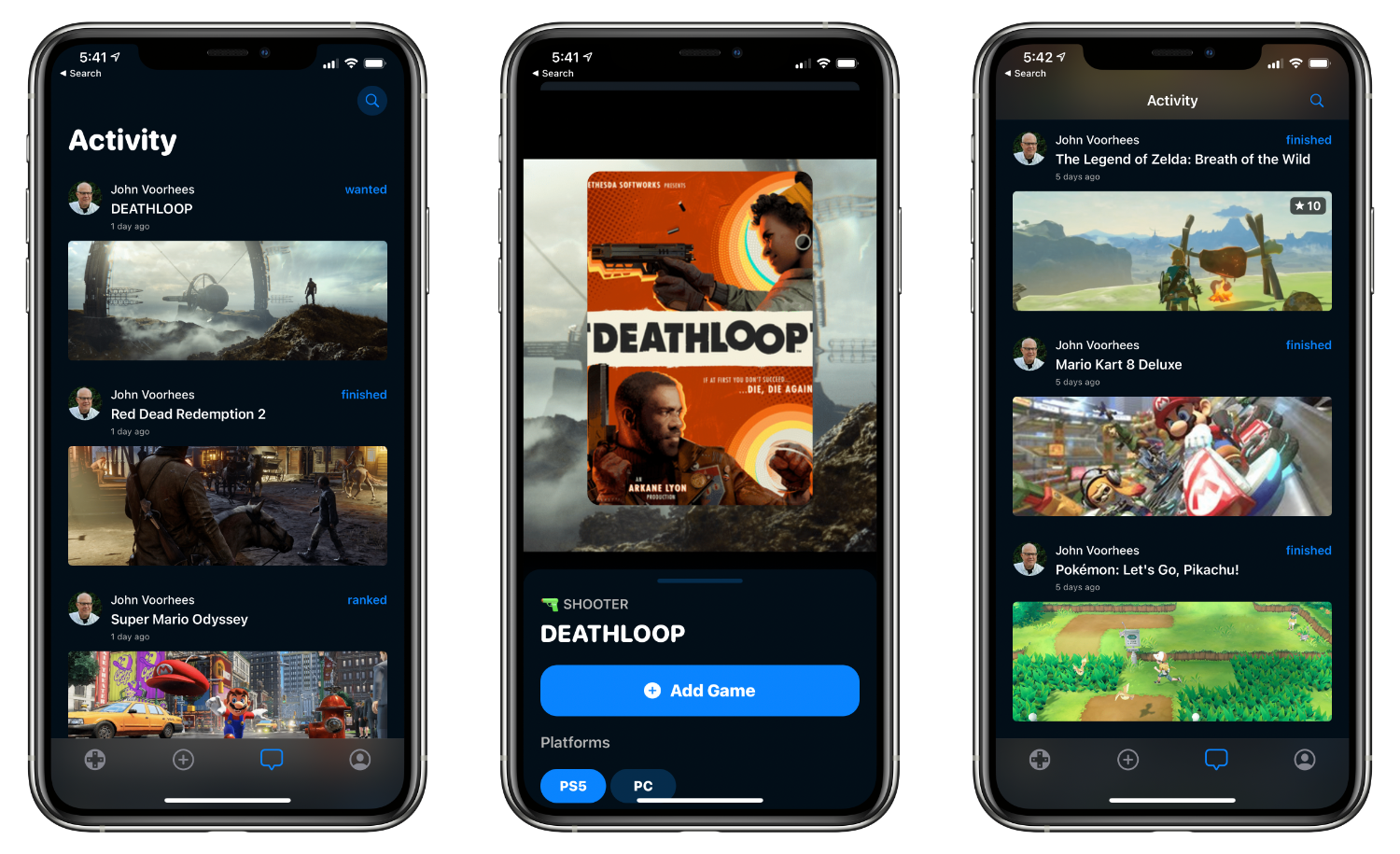 Activity includes games you and the people you follow have added to GameTrack.

The Activity tab serves as a reverse chronological log of games you’ve added and to which lists. Here, you’ll also find entries of anyone you follow. The feature is powered by Sign In with Apple and syncs across devices. I haven’t spent a lot of time with the Follow feature, but account activity along with lists syncs quickly and reliably and it’s easy to find and follow someone if you know what their username is, or if they share a link to their profile with you. It would be nice to discover users you don’t know that have similar tastes in games, but that isn’t currently possible.

Despite the discovery limitations, I like the Activity feed a lot because it provides an opportunity to connect with other users to share the games you love. The app also allows you to share individual games using the share sheet, but I’d like to share full lists of games with friends and collaborate on lists too. 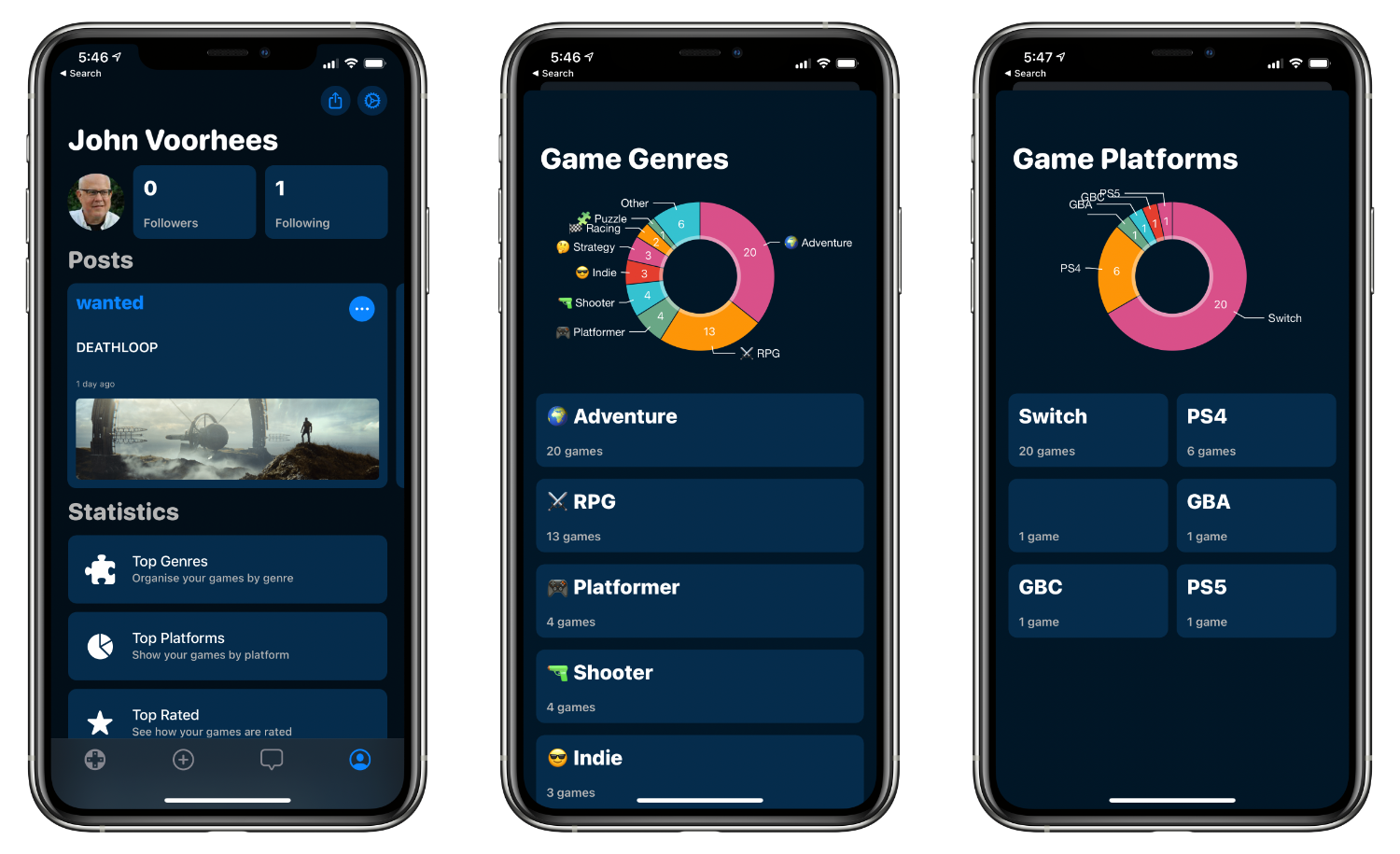 From the Account tab, you can share your profile, view recent activity, and browse statistics about your games.

The final tab is a combination Account and statistics view. From here, you can view followers and who you follow, access settings, and view and share or delete posts in your activity feed. You can also see statistics about the games in your lists broken down by categories like genre, platform, personal ratings, and your history of archiving games. Finally, you can log into your PlayStation, Xbox, and Steam accounts to track information from them as well.

Settings are worth mentioning, too, because GameTrack is highly customizable if you are a subscriber. You can change the app’s theme, layout, tint color, and app icon, personalizing it to suit your tastes. I particularly like the new default icon and alternative icons, which have added depth and a touch of realism to the icon’s D-pad. Of course, the original version is available too, in multiple colors and special variants. Settings is also where you can manage the details of your GameTrack account, connect your Xbox, PlayStation, and Steam accounts, and export your library data. 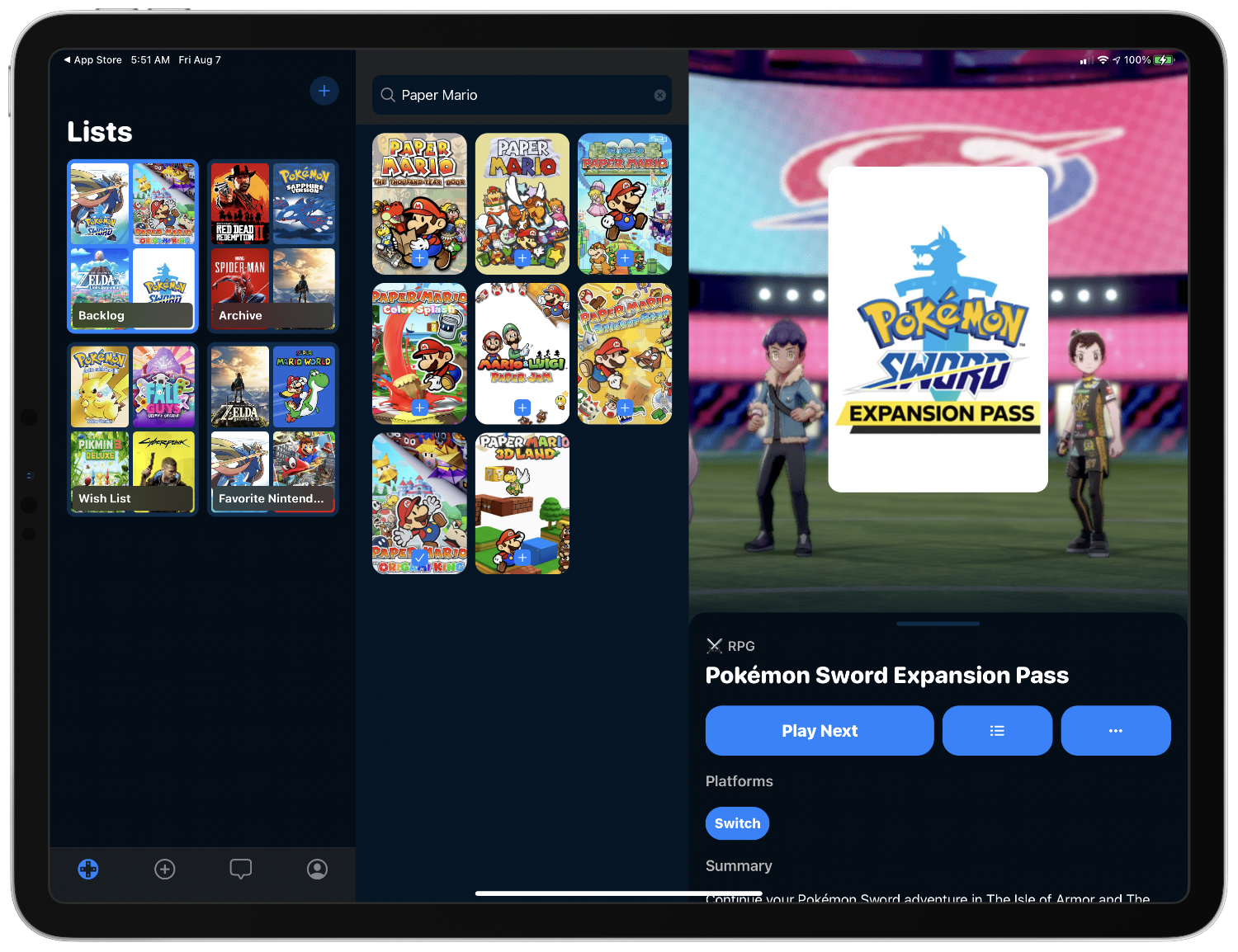 I’ve primarily used GameTrack on my iPhone, where the colorful game art tiles and slide-up card interface work especially well for navigating lists and searching for games. The tab bar design doesn’t translate as well to the iPad, where it is split across three columns. If my iPad is connected to a keyboard, the keyboard row often covers up GameTrack’s tab bar. I can hide the keyboard row, but it still makes navigating GameTrack too difficult. Also, as you switch tabs, the content in the second and third tabs don’t update until you select something new, which can lead to confusing or irrelevant information being displayed in them. On the iPad, GameTrack would probably benefit from considering the new sidebar layout offered with iPadOS 14, which is something developer Joe Kimberlin-Wyer has said he is working on.

Despite a somewhat awkward iPad design and some wishes here and there, I love GameTrack. Now, when someone recommends a game, I quickly drop it into my Wish List for the next time I’m in the mood for a new game and have the time to play it. That’s a much better system than buying a game on a whim and letting it sit for months before I try it for the first time.

I’ve also found myself browsing the Discover tab a lot, too, especially when I get behind on the videogame news that I usually follow. It’s a quick way to get a fix of the latest popular games and watch a few trailers, which open in Safari View Controller so I don’t have to leave the app.

Videogames have been one of my outlets as I’ve spent more time at home during the global pandemic. They’ve served an important entertainment role, allowing me to escape from the constant barrage of bad news for a little while. GameTrack has reduced the friction of starting a new game, even if I’ve been away from gaming for a while, by always having something ready on one of my lists, which I love. If you’ve been looking for a way to organize your gaming life, you can’t go wrong with GameTrack.

GameTrack is available on the App Store as a free download. Custom icons and lists, ranked lists, tints, themes, layouts, and automatically updating release dates for games are all part of a $0.99/month or $7.99/year subscription.