The iAd App Network will be discontinued as of June 30, 2016. Although we are no longer accepting new apps into the network, advertising campaigns may continue to run and you can still earn advertising revenue until June 30. If you’d like to continue promoting your apps through iAd until then, you can create a campaign using iAd Workbench.

This, however, doesn’t mean that Apple is discontinuing iAd completely. Benjamin Mayo explains:

The announcement is confusingly worded, but it does not mean that all of iAd is being discontinued. Developers will still be able to show iAd banners in their application; it’s just that the inventory for App Store apps to advertise will no longer exist. This is a blessing and a curse — it won’t help iAd improve its fill-rates but the CPM on these type of ads was significantly lower as the buy-in from the publisher side was also lower. 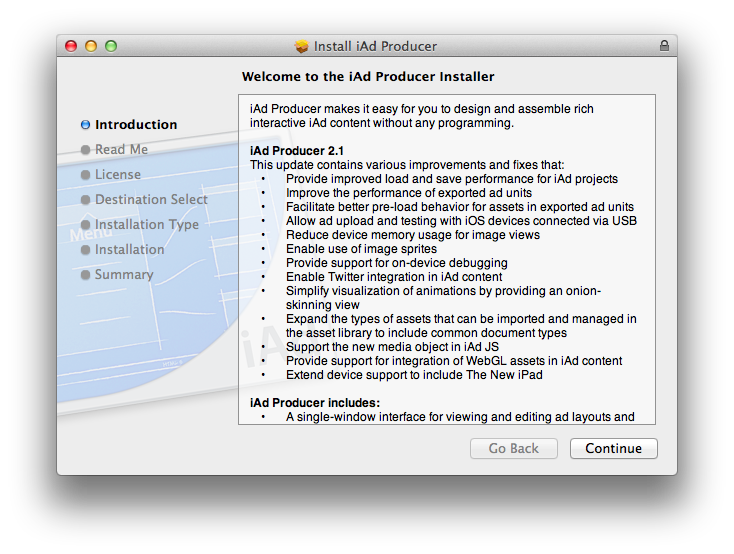 Apple today released an update to iAd Producer, its Mac application aimed at allowing designers and developers easily create and test rich advertising banners to feature on Apple’s iAd platform. The new version of the app, 2.1, provides support for WebGL assets in iAd content, brings support for the new iPad, and supports the new media object in iAd JS.

From the release notes: 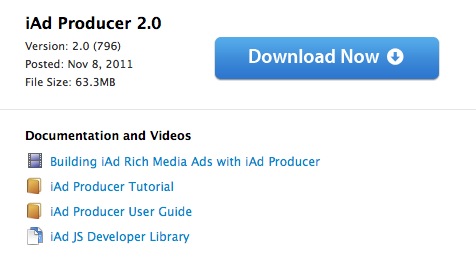 Apple today released an update for iAd Producer, its developer-oriented design tool that enables easy creation of high-quality, interactive content for Apple’s iAd platform. First released in December of last year, iAd Producer is an HTML and CSS layout application that automatically manages the technologies behind iAd (CSS 3, JavaScript, HTML5) to offer a visual aid in the designing process of rich and animated ads with an easy-to-use interface. iAd Producer allows developers to create and re-use their own page templates and components, manage the structure and flow of iAds for specific iOS devices in a single window UI, and test the results with a built-in simulator.

Today’s update, available here, brings changes in the animation section, an improved editor, project validation and a new Object List. The new Project Validation “automatically checks the size and type of image assets, and that pages and components are configured correctly” and makes sure an iAd has been built correctly before submitting it to Apple; it even checks for possible performance issues and other common errors. The Object List is another handy addition for developers, providing one-click access to all the objects or elements in a single page. Among changes to the JavaScript editor and other performance improvements, iAd Producer’s animation tools let you pick from a library of effects and animations that include wipes, fades, spinning effects, cube transitions and more. 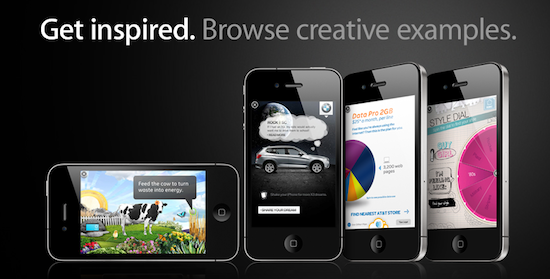 The iAd allows iPhone and iPod touch users to search for their dream home, scrolling through visually driven search features to find specific homes matching their criteria. You can search by price, zip code, and include images of the homes.

So far, the campaign is bringing “glowing results” with 11 pages on average viewed per visit, engagement time above one minute and conversion rates four times higher than standard search ads. Apple’s iAd is currently live in 7 countries across America and Europe, with a minimum buy of $500,000, lowered from $1 million to allow smaller companies to launch campaigns to display on iOS devices. iPhones, iPod touches and iPads are supported, but a recent email from a member of the iAd team suggested Apple, following a request from advertisers, has shifted its targeting focus to hide advertisements from some kids-oriented apps.

Since its introduction last year, Apple’s iAd advertising network has been off to a somehow rough start: touted as the best way for advertisers to build interactive campaigns to deliver effortlessly to iOS users, the service was repeatedly criticized by advertisers and ad agencies due to Apple’s strict design requirements and control, expensive minimum buy and low fill rates compared to Google’s AdMob network. In the past months, Apple tried to address several issues reported by iAd’s initial partners: they released a desktop tool to design iAds visually on a Mac, they cut the minimum buy in half from $1 million to $500,000, and rolled out fullscreen ads with even more interactivity on the iPad. They updated the official iAd website to display more information and details, and released an iPhone app entirely focused on showcasing experiences built for the iAd network.

A change in the way Apple chooses the apps that can display iAds, however, might cause a little bit of confusion among developers that, until now, have relied on iAds as the sole source of income for their free apps. Mike Zornek, developer of the free Dex app for iPhone and iPod touch (a Pokèmon browser application), relays an email from the iAd Network Support team in which an Apple employee explains how iAds may not be displayed anymore in apps targeted to “young children” because of the advertisers’ preference to not show ads to this particular audience. END_OF_DOCUMENT_TOKEN_TO_BE_REPLACED

iAd Gallery, a free iPhone app Apple released yesterday in the App Store, has generated several debates on the Internet about its rather “limited” feature set: the app, good-looking and responsive, does only one thing: it’s a collection of advertisements you can browse and “love.” By aggregating the best campaigns recently launched on the iAd network, iAd Gallery only lets users interact with a spinning wheel featuring ads from different brands, view information and “launch” them to experience the rich functionalities of iAds. Basically, it’s a free ad collector for iPhone. Not exactly the kind of “productive” (or at least entertaining) software most users would expect from Apple.

As noted by Dan Frommer at Silicon Alley Insider, it is kind of ironic that iAd Gallery may be violating Apple’s own Review Guidelines for iOS apps and should have been rejected by Apple itself. In the 2.13 section of the Guidelines, the company explains:

Apps that are primarily marketing materials or advertisements will be rejected

iAd Gallery indeed is based on marketing materials and doesn’t do anything but enabling you to browse various ad campaigns. Sure, you can read details about a specific campaign and learn more about the agency behind it, but that’s not really a “functionality” in our opinion. The app also lets you get in touch with the iAd team with a Contact button: perhaps the App Review Team at Cupertino thought that was enough to let the app through the App Store gates.

The truth is, of course Apple won’t reject its own app because it violates one of the Guidelines. They manage and have the ultimate word on the App Store, and they can release whatever they want under the Apple, Inc. name. But looking at the big picture, it is kind of funny that Apple is distributing an app that would have been rejected if it came from someone else. 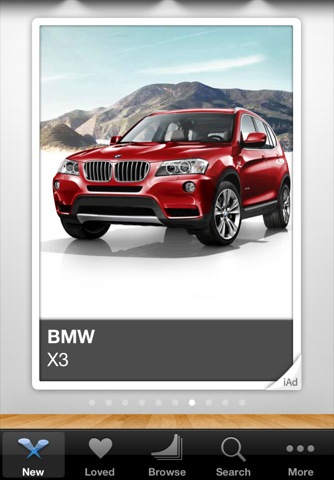 Released a few minutes ago in the App Store, iAd Gallery is a new iPhone app developed by Apple and aimed at showcasing the best iAd campaigns that landed on iOS in the past weeks. The app collects several iAds for iPhone, you can browse by advertiser, category or ad feature thanks to a spinning wheel that lets you easily jumo through ads and select the ones you want to “watch”. You can also learn more about the advertising agencies behind a campaign, and check out the latest ads from the iAd network. You can also “love” specific iAd campaigns and access them at any time from the Loved tab in the bottom toolbar.

The iAd Gallery is a celebration of advertising, featuring iAd campaigns from some of the world’s best brands and their advertising agencies. The iAd Gallery gives you easy access to a selection of the fun and informative ads that have run in some of your favorite apps. Use the Browse feature to discover ads you haven’t seen, or to find those you want to see again. Even lets you tag your favorites to a Loved section that’s all your own.

From a first quick test, it appears that the app takes a few seconds to load the initial gallery (even on a fast WiFi network), but once loaded everything is quite responsive. Browsing through ads in the wheel feels smooth and fast; in the More section, you can contact the iAd team to ask for more info about joining the network. Clearly this is an app meant for media and business to showcase the capabilities of iAds, and perhaps also educate App Store users about the interactivity of Apple’s ad platform. We’re not sure what kind of message Apple is sending to advertisers here, and if the impressions generated in this app account for the iAd campaign itself. It is worth nothing, though, that Apple recently cut the minimum iAd buy in half to $500,000 from the previous $1 million, and a released a desktop tool called iAd Producer to simplify the creation of iAds for designers and developers. Advertisers claimed that iAd wasn’t off to a happy start at all after the initial hype, although we’re hearing iAd revenue for iOS devs has seen a huge rise in the past three weeks. Apple also rolled out fullscreen iAds for the iPad.

You can find iAd Gallery here. More screenshots below. END_OF_DOCUMENT_TOKEN_TO_BE_REPLACED 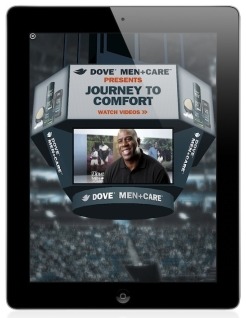 Back in December, Apple launched the first iAd for the iPad – a fullscreen interactive experience for the Tron: Legacy movie that allowed users to check out characters’ bios, trailers and storyline within a well-designed interface that was the first to make use of the iPad’s larger screen for the iAd platform. When the Tron iAd was launched, however, Apple confirmed that it would be the only one for 2010, with more iPad-specific iAds coming in 2011. As noted by CNET, the rollout of these new iAds has begun today with Unilever and the NCAA.

Unilever has teamed up with the National Collegiate Athletic Association “to give users an up-close view of three of its stars”. The ad runs in fullscreen mode and comes with video ads featuring Earvin “Magic” Johnson, John Thompson III, and Bobby Hurley. The iAd also enables users to answer NCAA-based questions, and check out daily game schedules directly from the iPad.

With the introduction of iOS 4.3, it was clear that Apple had implemented full iAd support in the tablet. The application to design and develop iAds on the Mac, iAd Producer, was in fact updated last week to include iOS 4.3 support and “creation of ads with multiple banners”. The news of new iAds for the iPad comes after Apple cut the minimum iAd buy in half at the end of the first round of campaigns, probably to address advertisers’ complaints that iAds, although successful and well-targeted, weren’t worth the $1 million minimum spending required by Apple.

Together with the release of Xcode 4, now also available for non-registered iOS and Mac developers in the Mac App Store, Apple also pushed an update for iAd Producer, its iAd design and development software for OS X.

Version 1.1 (weighs in at 91 MB) brings iOS 4.3 compatibility and the possibility to create ads with multiple banners. As promised last year, the iPad is fully targeted in this release with fullscreen banners as well.

iAd Producer is available in the iOS Dev Center.