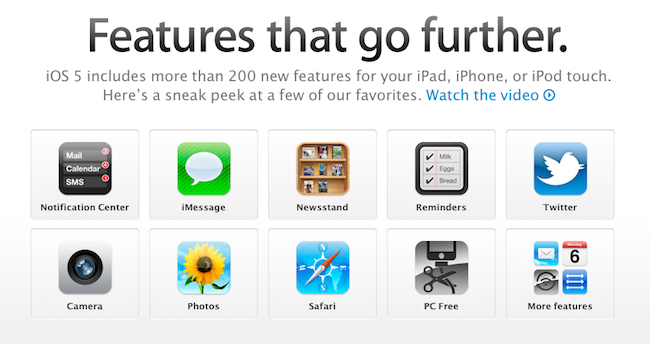 Since Apple’s official presentation of iOS 5 at the WWDC keynote on Monday and the release of the first beta to developers, lots of things have been said about Apple’s new modus operandi based on watching the community, seeing what developers and jailbreakers are building to improve the OS and answer the needs of hardcore iOS users, and going back to the drawing board to take inspiration from what the ecosystem has created to offer a native solution, designed from Apple, in most cases better than the competition or third-party solutions. If you followed our keynote coverage and WWDC ‘11 roundup, you know what’s new in iOS 5 and what we’re referring to: the new notification system is heavily inspired by jailbreak tweaks like LockInfo and Mobile Notifier (which were inspired by Android’s notifications); the new Reminders app will likely eliminate the need of simple to-do list application from the App Store (but not complex GTD software like OmniFocus); the iMessage solution built by Apple sounds like RIM’s BlackBerry Messenger, it’s exclusive to iOS 5 users and keeps your messages in sync with iCloud.

With hundreds of new features, there’s a lot to discover in iOS 5, and more will come with future betas and the final release this Fall, we’re sure. The way I see it, Apple didn’t “kill” anything as several pundits are claiming: it’s called progress. Whilst the term “killing” implies a voluntary action of willing to do something against someone, with iOS 5 Apple doesn’t want to “kill” Remember the Milk, Dropbox, or Boxcar. Apple sees where the platform is going and skates to where to puck is going to be. I agree with our editor Cody when he says it’s not really about copying, as much as it’s about improving existing solutions to provide a better experience for everyone. Nothing’s really new nowadays, but there’s still room for innovation. It’s a subtle difference.

So with iOS 5, we have lots of innovations, new features, improvements, and all of the above. You’ve probably already read everything about the most important functionalities in our roundup, so here’s what we’re going to do next: rather than assembling a list of every single screenshot of what’s new in iOS 5 beta 1, we’ve collected the 10 best new things (some of which you may not have seen yet) we’ve found in iOS 5 beta. 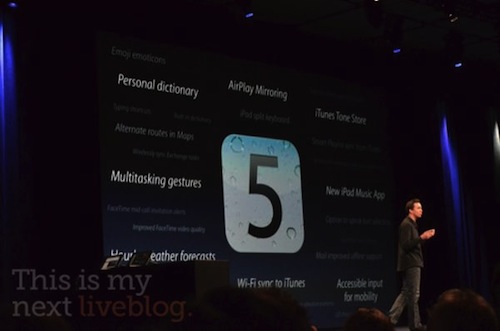 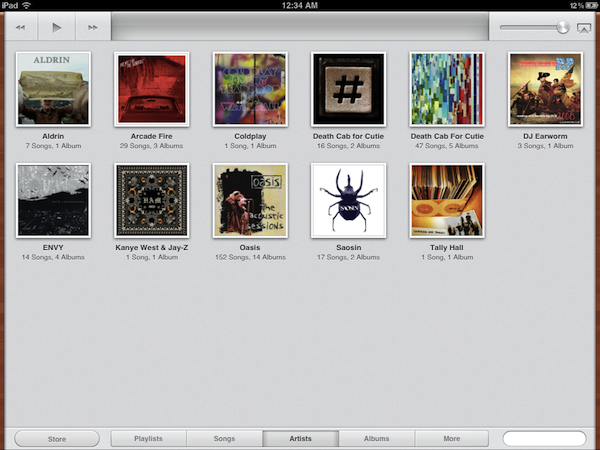 With iOS 5, Apple has renamed the iPod.app to Music and completely overhauled the UI on the iPad. Gone is the iTunes-like look, and the annoying album artwork behavior is no more: the new Music app for iPad is elegant, looks like a tape deck with a subtle wooden background at its sides and big, tappable buttons on top; playlists look like vinyls stacked on top of each other, and albums are elegantly displayed on a light background that makes artworks truly shine on the iPad’s screen. With real-time search, a new animated Now Playing screen, gorgeous album artwork view and a more accessible tabbed interface, the new Music app for iPad rocks.

iCloud support in the iOS 5 beta and OS X Lion Developer Preview 4 lets you keep a variety of content in sync between your devices: Mail, Contacts, Calendars, Find My iPhone, Bookmarks, Notes – just like with the old MobileMe, all these bits of information can work seamlessly across Macs, iPhones and iPads with Apple’s renewed cloud infrastructure based on storage and push technology. However, the new iCloud settings panel in iOS 5 packs a series of new welcome additions that weren’t previously available on MobileMe: namely, the settings have been revamped to accommodate the new Reminders sync for to-do lists, Photo Stream to share your most recent photos in the cloud, and Storage & Backup to take advantage of iCloud’s background app backup capabilities. Furthermore, the same Settings can be found in OS X Lion by installing an iCloud add-on from the Dev Center. iCloud is a complex technology, but it appears Apple is focusing on making it super-simple for everyone with easy to understand options, preferences, and design.

This one’s very simple, yet useful. iOS 5 devices will be able to sync with iTunes either wirelessly (when connected to a power source) or through the usual USB cable; but when they sync, this time you’ll be able to keep using them. Just like the popular jailbreak tweak Synchronicity enabled users to keep using an iPhone while it was syncing with iTunes, Apple’s new solution puts an animated icon in the menubar to inform you that a sync process is happening. We love the idea, though we’ve noticed the iPad 2 is (obviously) more responsive than the iPhone 4 when syncing with iTunes (you might want to thank the A5 chip for that). 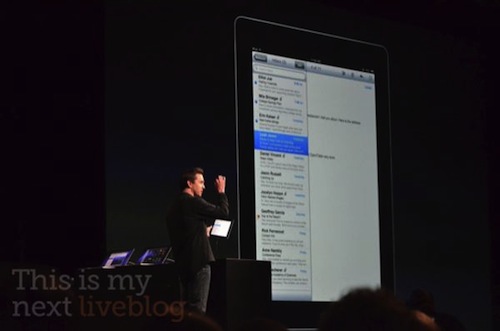 Built exclusively for iPad owners, the new “Swipe to Inbox” gesture allows you to quickly view the email inbox while in portrait mode just by swiping your finger horizontally from the side of the screen. One swipe, and a new inbox overlay pops up to reveal your messages. This is surely an improvement over iOS’ previous popover menu that forced you to tap on a button in the top toolbar to show the inbox; the popover-based interaction in email was also annoying because, in portrait mode, you could only see one message filling up the whole screen – it wasn’t exactly made for quickly skimming through all your emails, and that’s why many preferred to do email on the iPad in landscape. Swipe to Inbox partially fixes this problem by letting you see both the inbox and a message in portrait, yet we wish Apple implemented an option to let Mail become a two-panel app in this orientation, like the Settings. Swipe to Inbox overlays the existing message, it doesn’t split email in two separate panels, like HP did on the webOS Touchpad. Still: the easy of use and implementation of the swipe gestures make the new iPad portrait email 10 times better than iOS 4. 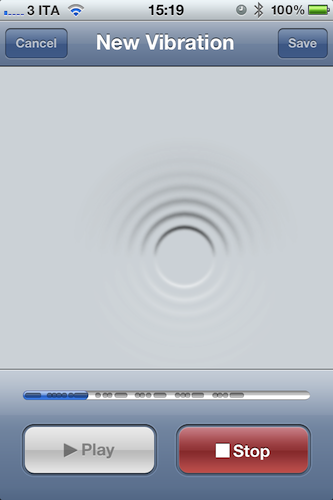 iOS 5 comes with innovative new features that make it easier for people with mobility, hearing, vision, and cognitive disabilities to get the most from their iOS devices. iOS 5 works with specialized hardware accessories. The LED flash and custom vibration settings let you see and feel when someone’s calling. And improvements to VoiceOver include custom element labeling. These are just a few of the ways iOS 5 continues making advances in the field of accessibility.

Available deep down in the Accessibility settings of iOS 5, the new Custom Vibrations option allows you to create new vibration patterns to assign to each of your contacts, or simply activate at a system-wide level. Once enabled in Accessibility, new vibrations can be created in the Sounds settings panel, with a simple UI that tells you to “tap on screen” to create your pattern. You can tap or tap & hold to create short and longer vibrations. Once created, hit Save and choose a name to have the custom vibration available in the iOS Settings. The functionality is very useful if you want to assign a specific vibration pattern to your favorite contacts so you can instantly recognize an incoming call without even looking at the iPhone’s screen. 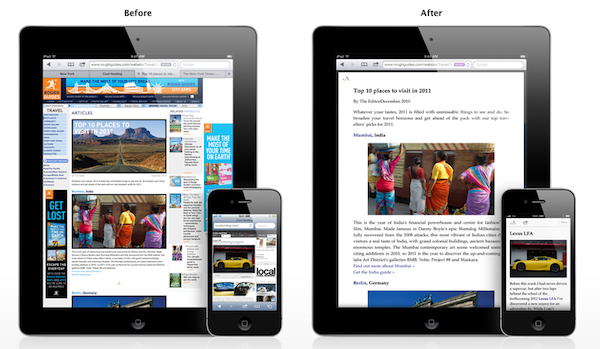 iOS 5 brings even more web-browsing features to iPhone, iPad, and iPod touch. Safari Reader displays web articles sans ads or clutter so you can read without distractions. Reading List lets you save interesting articles to peruse later, while iCloud keeps your list updated across all your devices. On iPad, tabbed browsing helps you keep track of multiple web pages and switch between them with ease. And iOS 5 improves Safari performance on all your iOS devices.

Initially implemented on Safari 5 for Mac, Safari Reader allows you to turn any article from any webpage into a clutter-free experience that strips away all unnecessary content to focus on the article’s text and images. Powered by beautiful typography and font size options to make text smaller or bigger, Safari Reader on iOS 5 works just like the Mac version: load an article in Safari, hit the Reader button, and start reading. Multi-page articles are formatted in a unified view with page breaks, and articles can be sent to the new Reading List bookmark menu to keep them available for later on all your devices. 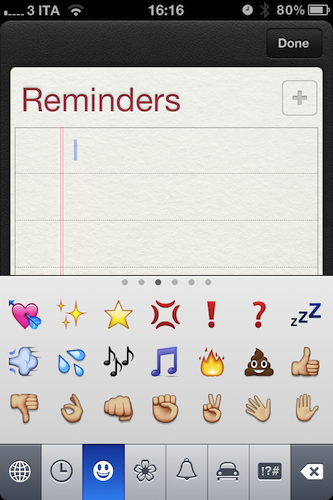 I have a love/hate relationship with Emoji, mainly because I want to use those characters sometimes, but more often than not I find them annoying and ugly to look at. Still, if you’ve been using iOS 4 for quite some time, you know that the system is capable of displaying and writing Emoji characters, only the special Emoji keyboard needed to be enabled with some tricks and apps from the App Store that forced iOS to activate the Japanese keyboard with the aforementioned little characters. No more: iOS 5 comes with an Emoji keyboard out of the box, which you can activate in Settings->General->International. 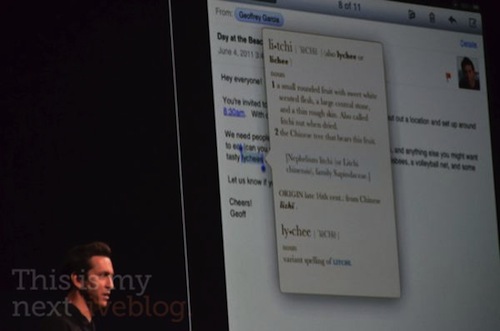 Announced by Scott Forstall on stage at the WWDC keynote, the new Dictionary option is simple, yet powerful: in any app, anywhere in the system, select a word and hit Define in the popup menu. The same dictionary seen on iBooks will pop up on screen, providing definitions and Wikipedia / Thesaurus content when available.

These are the little features and improvements that truly impressed us in iOS 5. More will come in the future betas and developer seeds, but as of today, there’s no doubt iOS 5 will be the most important update to iOS since the original iPhone OS shipped.

(WWDC 2011 Keynote liveblog photos from This Is My Next)