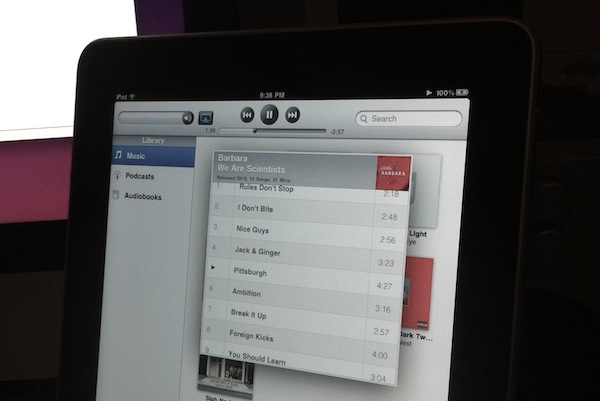 Until today, I never really experienced a real-life AirPlay situation. Sure, I configured a couple of devices to work with it, I even hacked my iPhone and iPad to become AirPlay speakers and played around with some tweaks from Cydia, but all this was mainly done in order to guarantee coverage for MacStories. A few minutes ago I finally met the real AirPlay. It wasn’t planned. It just sort of happened, and it was great.

Tonight I came home to have dinner with my parents. Before dinner though, I sat on the couch and, while a dumb 90’s movie was playing on TV, I pulled out my iPad and checked on Twitter. I read the tweets I missed this afternoon when I went looking for a new stereo system, then I fired up Cydia to check for updates. No updates were found. Dinner was ready, I locked the iPad and left it on the couch.

Thirty minutes later, I asked my father to prepare some coffee and I grabbed the iPad to go upstairs in my room. While I was walking up the stairs, I opened the iPod app because I wanted to listen to some We Are Scientists. As I entered my room, I automatically pressed the AirPlay button on my iPad, sat on my smaller room couch and started reading an article in iCab Mobile. Music was playing through my stereo plugged in an Airport Express station, but at first I didn’t even notice what happened. I just started reading with some music in the background. A few minutes later, I realized that it all happened automatically, naturally, without the need of testing AirPlay for work purposes. It just happened.

Now here I am, writing this post, asking myself if this is exactly what Apple wanted from its users, iOS 4.2 and AirPlay. A system that can naturally fit into our daily lives, a button on our phone and tablet screens unobtrusive enough to be pressed without any doubt, a small taste of things to come in streaming technology. Yes, I do think that AirPlay can evolve: streaming isn’t immediate yet, video is limited, it’s just a first iteration.

But I just met the real AirPlay, and I look forward to spending more time together.