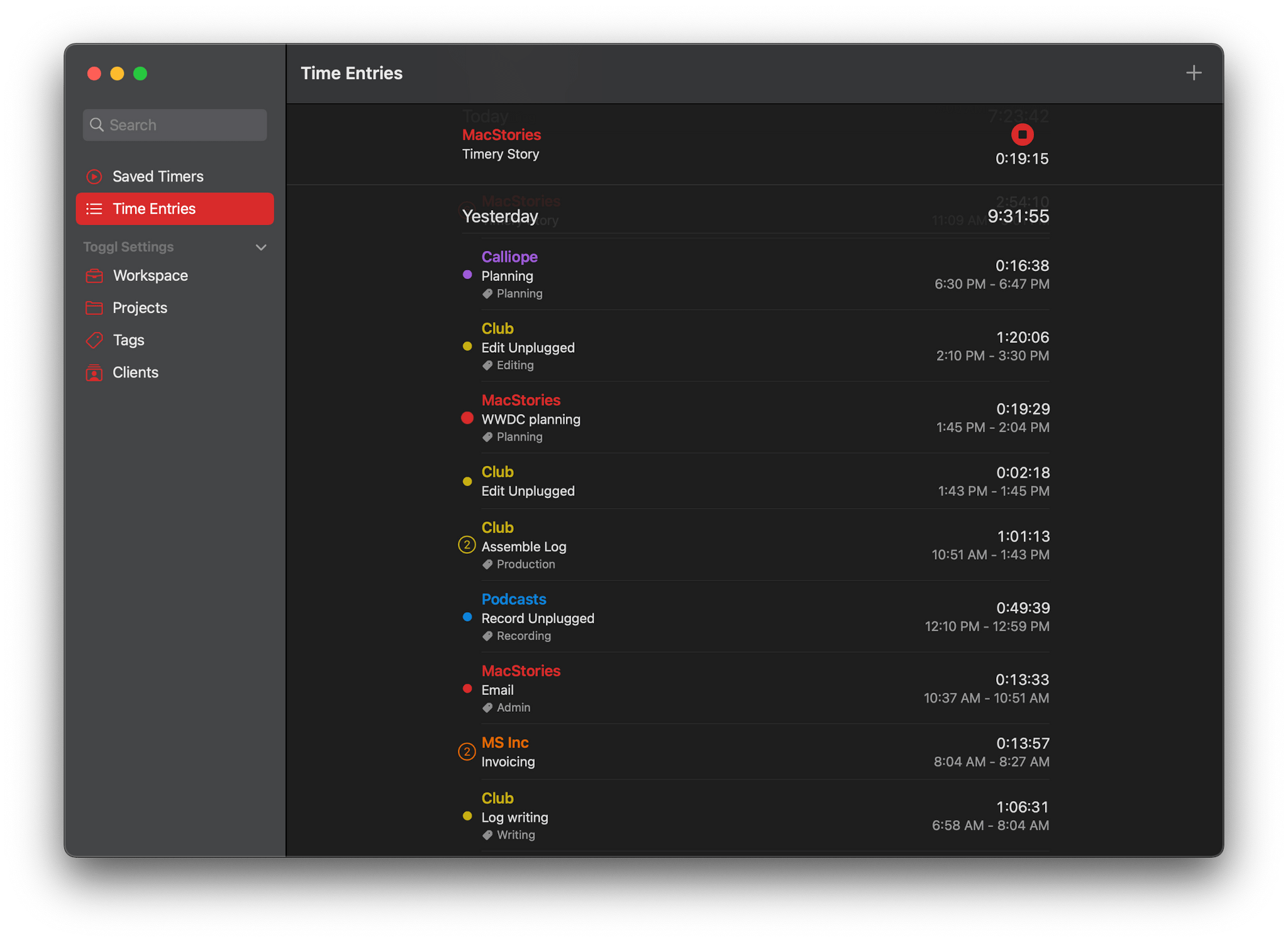 I don’t track my time because I enjoy starting and stopping timers; I do it because, over the long haul, it provides valuable insight into how I’m spending my time. As useful as it is to have data on how much a project or task takes or how much time a task consumes relative to other things I do, the act of tracking itself can be tedious, which is why it can be so easy to fall out of the habit of doing it.

The reason I’ve used Timery, the time tracking app for Toggl, on my iPhone and iPad since it was released, is because of developer Joe Hribar’s attention to making it as easy as possible to track your time without a lot of fuss. Features like saved timers, widgets, keyboard shortcuts, and Shortcuts actions for automating timers have made the app a delight to use since version 1.0.

In fact, the Timery experience has been so good that I used it even though it had no Mac app, which is something I rarely do with apps I use every day. However, with the release of version 1.2 of Timery today, I no longer need to use a different time tracking app on my Mac because Timery has been released as a Mac Catalyst app, complete with all the features Timery users already know and love from iPhone and iPad versions. Today’s update to Timery isn’t just a treat for Mac users, though. Version 1.2 also packs in a long list of new keyboard shortcuts and settings for all users, making this one of the biggest updates since the app was launched. The look and feel of using Timery on the iPad and Mac is nearly identical.

In creating a Mac Catalyst version of Timery, the iPad version of the app had to evolve too, with a lefthand sidebar instead of a tab bar at the bottom of the screen. On the iPad, the sidebar can be collapsed and includes Saved Timers and Time Entries, plus a separate section for Toggl Settings that can be folded to hide its individual subsections. Besides the sidebar, the iPad version’s design hasn’t changed appreciably, and the iPhone version is the same.

If you’ve used Timery on an iPhone or iPad before, you’ll be right at home using the Mac version. The app works with both free and paid Toggl accounts. Free users can track time based on projects and tags, while paid users can further refine tracking using Toggl’s task system. Unlike some Mac Catalyst apps, Timery for Mac makes extensive use of the macOS menu system, as well as keyboard shortcuts. Although the app doesn’t include a traditional preference window, it’s still one of the best Mac Catalyst apps I’ve seen, offering the full Timery experience in a way that is comfortable and familiar to use on the Mac.

You’ll find the same system of pre-defined Saved Timers in Timery for the Mac, as well as a chronological list of previously-logged items in the Time Entries section where you can create one-off timers and restart, edit, and delete existing ones. The app also includes extensive Shortcuts support on the iPhone and iPad and widgets on all platforms to access saved timers, monitor your current time entry, and review your total time tracked. If you’re new to Timery, which we named the Best New App as part of the 2019 MacStories Selects Awards, be sure to check out our previous coverage for all the details.

Timery already had great support for external keyboards, but with version 1.2, the app has taken that support to an all-new level, which I’ve found I appreciate the most on the Mac. When I work on my iPad, I often tap Timery’s Project or Tag entries to add them to a timer. On the Mac, doing the equivalent with a trackpad or mouse feels like a heavier interaction. Perhaps that’s because I’m usually moving from one typing-centric task to another on the Mac, but whatever the reason, the new keyboard shortcuts and other settings added to version 1.2 of Timery have made starting timers with just the keyboard incredibly easy. Timery has granular options that let you control exactly when its description field is selected.

Saved timers and the ability to restart a timer with a swipe gesture from the app’s list of logged entries are great ways to start a new timer, but Timery’s new option to offer suggestions from a timer’s description field is my favorite way to start a timer now. There’s also a new option in Timery’s settings that puts the cursor’s focus in the description field by default. Add to that the app’s keyboard shortcut for initiating a new timer, and the whole process is incredibly fast. It might not seem like much at first, but if you’re moving from one task to another throughout the day, being able to get a timer started with minimal effort means not breaking your concentration or abandoning time tracking out of frustration. 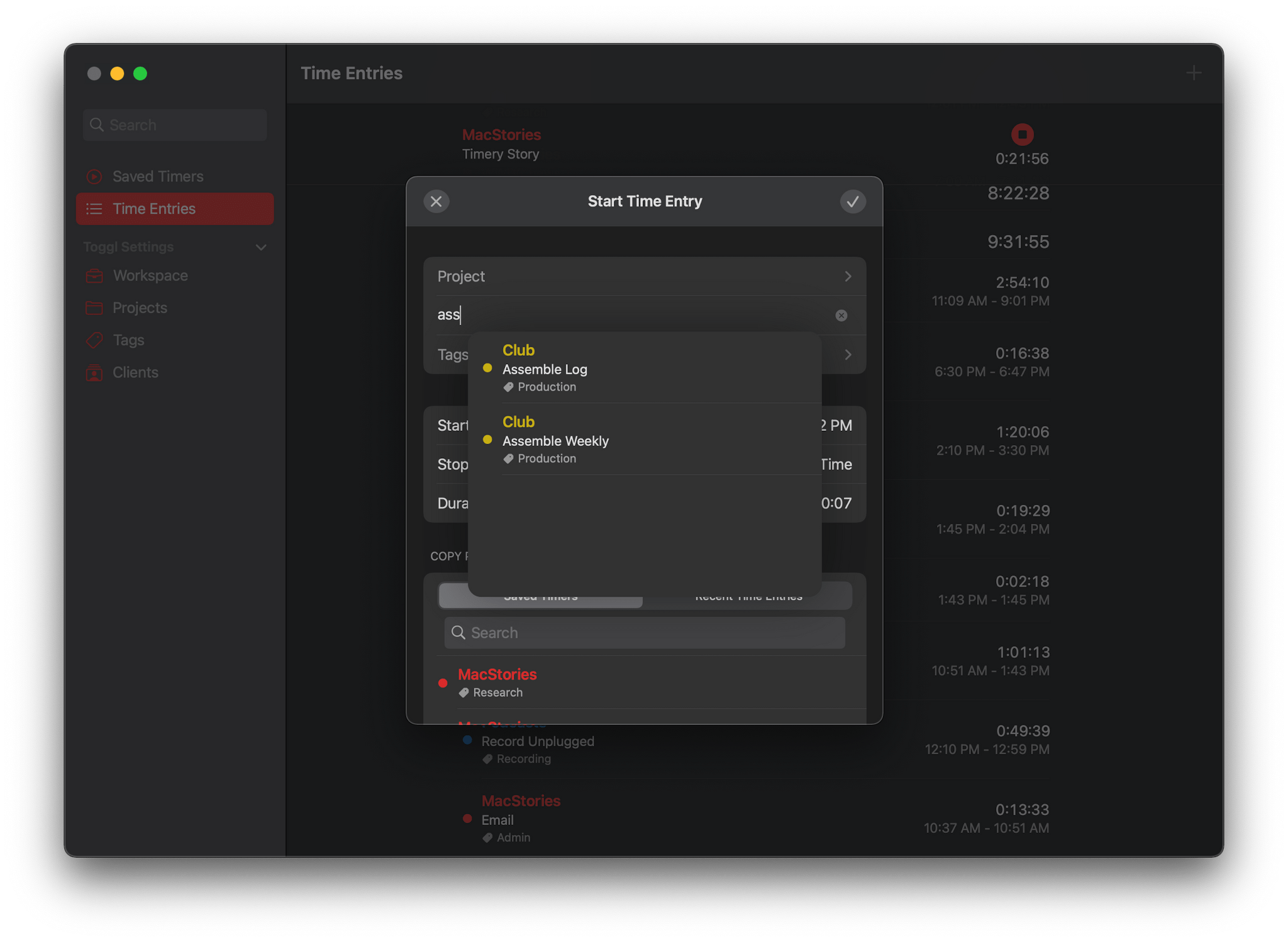 Timery suggests saved and recent timers as you type in the description field.

The process for starting a new timer is usually just three fast keystrokes:

That’s it. The linchpin to the system is the automatic selection of the description field, which can be turned on in Timery’s settings, plus the list of suggested timers.

Two of my four pages of Timery keyboard shortcuts.

There’s a grab bag of other new features worth mentioning. For instance, there are new settings for rounding time entries up, down, or to the nearest whole increment for a wide range of time increments. Rounding isn’t a feature I need, but I expect it will be handy for anyone who bills their time in specific chunks of time. Rounding has also been added as a parameter to the Shortcuts action for stopping timers, and the app supports multi-windowing on the iPad now too.

Version 1.2 of Timery is a bit of a sleeper release. On the surface, not much has changed on the iPhone or iPad. However, if you spend a little time exploring the new keyboard shortcuts and settings, incorporating them into your workflow, you’ll quickly find that the update substantially increases your efficiency. Coupled with the all-new Mac version, which is a big deal for anyone who works on a Mac and iPad regularly, the latest Timery update is its biggest update yet.

I’d still like to see reports added to Timery in the future, but I’m glad the Mac was addressed first. Time tracking is the sort of activity that needs to exist everywhere to be most effective. I’ve spent the past couple of years using Toggl’s Mac app, which has improved dramatically in that time, but I’m glad that I can now learn one set of keyboard commands and use them across both the iPad and Mac. If the lack of a Mac version of Timery was holding you back, now is a perfect time to give the app a try.

Timery 1.2, which is a free update, is available on the App Store. Some of Timery’s features require a subscription to Timery Club, which costs $0.99/month or $9.99/year.