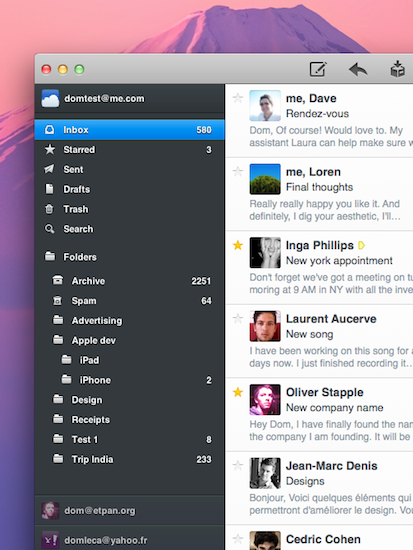 Sparrow started out as a minimal, Tweetie-like email experiment for Mac back in October of last year and, following the success of the public beta, eventually evolved into a powerful desktop solution to access Gmail and IMAP email accounts using new interface concepts inspired by iOS apps, Mac gems like Twitter and Reeder, or other changes previewed by Apple in Lion. As we reported in our previous coverage, the latest big update to the app, Sparrow 1.2, went as far as adding social support with Facebook integration,  Gravatar support, and more.

Sparrow 1.3 was approved yesterday, but the developers had to quickly pull it from sale as a critical bug that caused the app to crash was discovered. After apologizing for the technical error and uploading a patched version for non-Mac App Store users, the team announced a fix had been already submitted with the request of an expedited review from Apple. Personally, I updated to Sparrow 1.3 yesterday and didn’t experience any issues, but I decided to hold my coverage until the promised fix would be available on the App Store – more importantly, the entire app had to come back on Apple’s servers as the developers pulled it to make sure no one would install a “buggy” version.

Sparrow 1.3.1 is now available, and it brings a series of welcome enhancements to the alternative email client that has been generating quite a following in the past months. First is full Lion support: the app has been tweaked to work on the new OS and it comes with a new launch animation and full-screen support. Whereas a new minimal mode also allows you to focus on your inbox by hiding the (new) sidebar (more on this in a minute), full-screen can only be activated if you show the Message Panel on the left. In full-screen, Sparrow becomes a full-featured email client with mailboxes on the left, message list in the middle and actual messages on the right, however I’ve also noticed a bug that will sometimes “freeze” full-screen mode with no messages displayed, forcing you to quit the app from the dock as the full-screen button in the menubar won’t work. I hope this gets fixed soon.

Another big change in Sparrow 1.3 is the redesigned sidebar that, much like Reeder for Mac, can be resized to show mailboxes, folders and labels as actual menu items, rather than icons. The resizing process works just like Reeder – just drag the sidebar separator to the right, and the sidebar will expand, although Sparrow’s animation isn’t quite as smooth as Reeder’s when doing this. Still, I prefer the new sidebar over the old one; it lists accounts on top of each other as tabs and, overall, it looks really nice.

There are some other changes in Sparrow 1.3 worth mentioning. Gmail’s popular Send & Archive option has been enabled in the Advanced settings of the app, now allowing you to send a message and instantly archive it in All Mail. Drag & drop has also been enabled for messages in the message list – you can drag a message to the Desktop and have it saved as an .eml file you can Quick Look, or drag it into OmniFocus’ note field in the Quick Entry to save a message for reference (with a link back to Sparrow). This has turned out to be quite useful for me, and I wish the Omni Group will officially support Sparrow with the Clip-O-Tron 3000 and mail rules in the future (though I have no idea if this is possible, just wishful thinking).

Other fixes introduced in today’s update include:

And more changes from the developers’ blog post about 1.3:

We re-worked the sidebar animations from the ground up. Account and category switching is faster and smoother. We made the message list scrolling more responsive and fluid. We hope that you’ll feel animations are more natural than in previous versions.

We also killed (yes, we killed them) all window animations. There hasn’t been too many complaints from you about it but once we’ve shut them off for testing purposes and noticed Sparrow felt quicker, we never turned them back on. We added a visible scrollbar to the sidebar. Even if it has always been possible to scroll the sidebar, your feedback suggested that was not sufficiently clear.

An ‘Empty trash’ button has been added too.

Sparrow 1.3 has a few bugs left to fix, but overall it’s a solid update that gives us a hint of what’s coming in the next versions. Sparrow can either be a minimal email client with focus on messages and people emailing you, or an app for “power users” thanks to the new full-screen mode, extended sidebar that simplifies navigation, and all those options available in the Preferences. You can download Sparrow at $9.99 on the App Store.