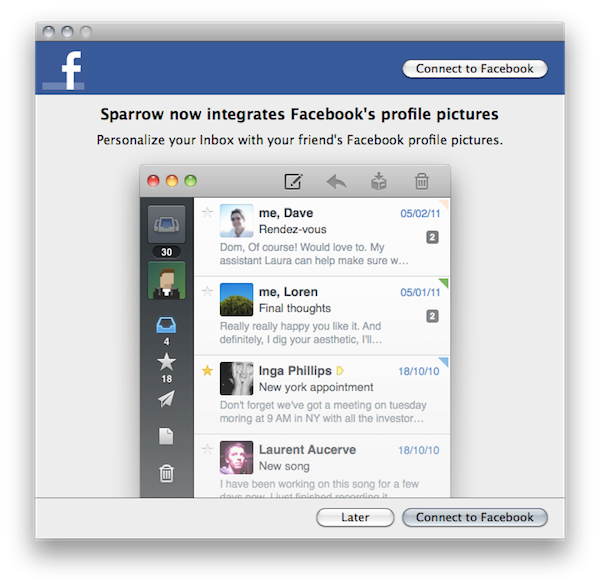 Teased earlier today at TechCrunch Disrupt in New York City, Sparrow 1.2 is now available for download on the Mac App Store. As previously reported, the new version adds a number of bug fixes and improvements, most notably enabling Facebook integration through Facebook Connect to automatically add profile pictures to contacts found in your social graph. Facebook support in Sparrow 1.2 is very straightforward: upon first run, you’ll be asked to connect with your Facebook account so Sparrow will be able to fetch your friends’ profile photos; according to the release notes, Sparrow 1.2 is also capable of letting you add new friends within the application, though I haven’t been able to test the new feature just yet. In the Settings, a new Facebook panel will allow you to disconnect from the service at any time and see friends that are also using the app.

Sparrow 1.2 brings many other functionalities such as a revamped dock icon that lets you write a new message with a right-click, new font options in the compose window and an overall interface refresh that’s quite welcome. Taking clues from Lion and other Mac apps like Twitter, Sparrow sports iOS-like scrollbars and free resizing on the message list. As I mentioned today, there’s a new Unified Inbox option that, just like iOS, allows you to see all your incoming messages from all accounts in a single tab; if you’re accustomed to this feature on your iPhone or iPad, you’ll feel right at home using Sparrow 1.2. Alongside these new options, bug fixes and localization in 8 more languages, Sparrow 1.2 brings the following changes as well:

With Twitter and LinkedIn support coming in the near future and new email functionalities likely in the works, Sparrow is shaping up to be a very interesting client for OS X that has a chance deeply change the way we think of social communication on our desktops. Go download the update here.