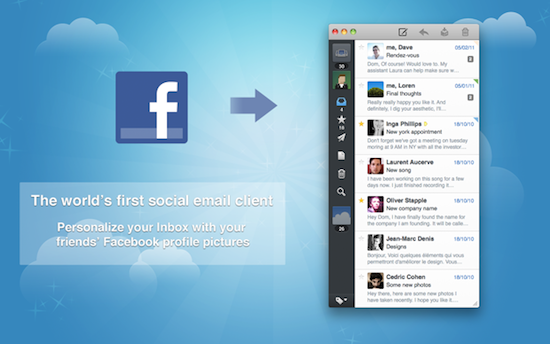 Sparrow, the minimal email client for the Mac that was born as a mix between Mail.app and Tweetie for Gmail and eventually evolved into a full-featured IMAP email application, has just announced version 1.2 at TechCrunch Disrupt, which will add a number of new features including the long-awaited unified inbox and a new social layer for your contacts. Since the app was first revealed as beta in October, Sparrow saw a terrific rise in popularity throughout the release of the various betas, and especially after the launch of a Mac App Store version and lite edition, Sparrow has quickly become many people’s favorite way to access Gmail and any other email provider with a convenient, simple interface that follows the latest trends set by apps like Twitter and Reeder for Mac. With the 1.1 update, the developers added IMAP support and integration with Google’s Priority Inbox, thus turning Sparrow from a lightweight client into a serious alternative to more complex apps like Mail and Postbox. The 1.2 update will bring the possibility to see all email messages in a single inbox without switching between accounts, as well as Facebook Connect integration to automatically add profile pictures to contacts. It’s not clear now if this new Facebook feature will also add photos to people that have emailed you using standard IMAP and Gmail accounts, but CEO Dom Leca says they’re “not adding social layers mail for the sake of it”, and Facebook Connect will let you add people as Facebook friends within the app.

Victor Ageda, Jr. from TUAW further reports Sparrow 1.2 will also add some kind of Tumblr integration. The Sparrow team has raised $250,000 in funding over the last months (funders include Twitter’s Loren Brichter), and the developers are looking forward to bring Twitter and LinkedIn support to Sparrow in future versions, turning an email client into a complete social messaging experience like no other on the Mac. The idea of grouping all kinds of social communication into a single app has always attracted users and developers, but no one really quite nailed it. Hopefully Sparrow will manage to blend it all together, yet retaining its nature of simple and powerful email client.

Sparrow 1.2 should be available later today or tomorrow on the Mac App Store at the regular price of $9.99. We’re looking forward to the update and the full list of changes in version 1.2.