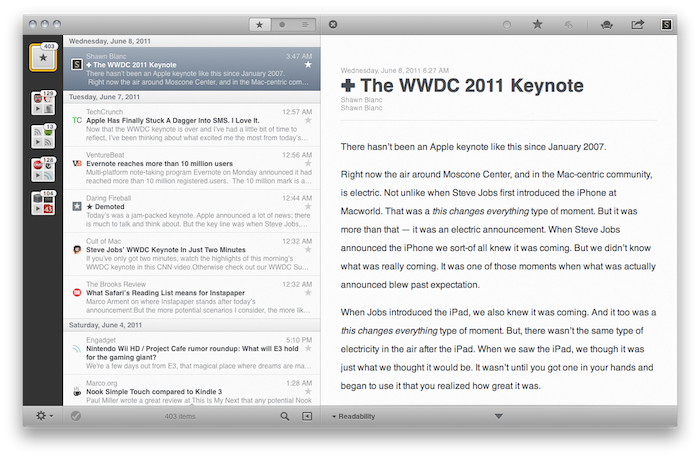 Over the past eight months, I’ve been following very closely the development of Reeder for Mac, a port of the popular Google Reader client for iOS to the OS X platform. As I was one of the first people to try the original Reeder for iPhone back in 2009, I immediately accepted Silvio Rizzi’s invite to join the beta testing group of Reeder for Mac in September 2010. Lots of things have changed since then. Sure, I never stopped using Reeder for Mac as my default desktop client, but there’s no doubt the app has gone through so many interface changes, design overhauls and feature additions I had to re-calibrate my workflow every time the developer updated something. That’s what you get by beta-testing things, but the evolution of Reeder for Mac was different: from our exclusive preview, to the first public beta and the one we reviewed last month, you can see how the app turned into something completely different from the experience I initially fell in love with. And that’s a good thing – the last full rewrite made Reeder for Mac insanely fast on Snow Leopard and ready to go on Lion. But enough with the beta talk.

Reeder for Mac is now available on the Mac App Store. Yes, it’s the real thing: no more betas from Made at Gloria’s website, no more in-app software updates due to expired versions. In case you missed our previous coverage, here’s a quick recap: the public version of Reeder for Mac is basically the same one I reviewed here four weeks ago, only with some minor additions to sharing options and the introduction of subscription management. If you haven’t tried Reeder for Mac beta in these past months, here’s what you’ll get from the Mac App Store: a Google Reader client for Mac that resembles its iOS counterpart, but due to the nature of the platform allows for some neat personalization options like different layouts, custom keyboard shortcuts, color presets, and more. Whilst Reeder for iOS and Reeder for Mac are the same app as far as the main concept goes (quickly fetch unread items for Google Reader, skim through them easily, provide features to do anything you want with RSS feeds), Reeder on OS X is obviously more “powerful” when you take in consideration the keyboard support, the subscription management, or the simple fact that links can be opened in the background in your desktop browser. For as much as people have criticized Reeder for Mac for being the start of an evil trend that will see iOS apps coming to the desktop (good luck with that), the undeniable truth is that Reeder is a Mac app, with all the evident advantages and limitations that come with it.

For instance, Reeder for Mac may feel like it’s more oriented towards power users, rather than casual readers who just want their daily RSS fix. And to an extent, that’s true: while Reeder for iPhone and iPad focuses on letting you log in and sync from the very first launch with no additional configuration needed (that is, you only have to adjust cache and services), Reeder for Mac requires a bit of personalization depending on what you want from a desktop RSS app. Without repeating all the changes I’ve already talked about, here’s the gist: Reeder for Mac has several options and commands to customize, like appearance presets (colors, texture, monochrome icons), services toolbar status and keyboard shortcuts, gestures, layouts, and more app shortcuts. Reeder for Mac lets you switch between “classic” and “minimized” layouts which, as you may have seen in the past weeks with the public beta, offer you a choice to read articles in a single panel (with an iOS-like interaction when it comes to scrolling the unread list, or sidebar sources) or a larger view that keeps unread items on the left, but opens articles (and browser previews) in a wide right panel. 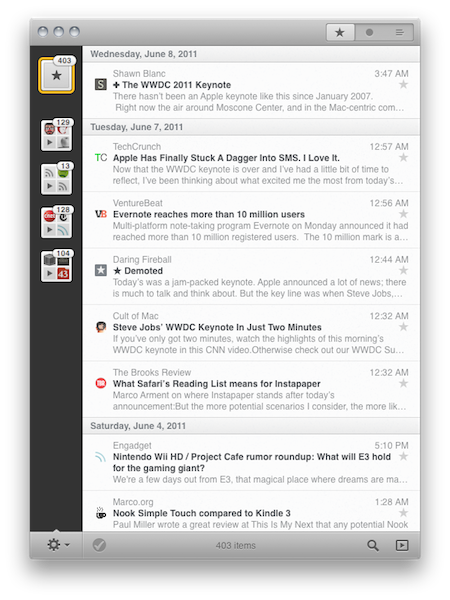 Personally, here’s what I do: I like to keep my Reeder’s source list (the Tweetie-like sidebar) minimized to favicon view, mostly because I don’t care about seeing the name of folders as much as I like to see a good favicon. My layout of choice is minimized mode which, thanks to gesture support to navigate and open articles, allows me to scroll the article list with three-finger swipes, and pinch to close/open articles within the same panel. The result: Reeder in minimized mode with gestures is the fastest and most intuitive RSS app I’ve ever had. I’m not a fan of classic mode, but I can see why some users would prefer to keep the unread (or starred) list always visible while they’re scrolling and reading new entries. But in the way I consume RSS, the possibility to quickly open and close articles with a pinch is just killer. And very, very iOS-like – the way Apple likes Mac apps nowadays. 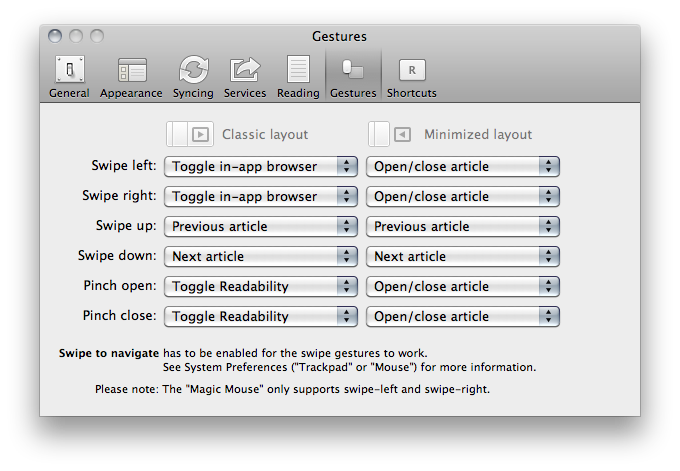 Once you’ve found your way around gestures, layouts and the minor settings you can see in the screenshots on this post, you might want to check out Reeder’s new subscription management. The “Manage Subscriptions” window is not integrated in the app’s main panel as it opens in a standalone overlay – a questionable choice that, however, hasn’t affected my workflow at all. You can open and close folders, delete tags (which show up below your actual folders), add new subscriptions, create a new folder or unsubscribe from a website’s feed. In my tests, I’ve noticed you can’t delete a folder, but you can drag subscriptions around and move them to another location. Again, this could have been implemented in Reeder’s single panel without opening an additional window, but I don’t really use the functionality much (I prefer managing my sources in Google Reader’s web app) to criticize it. 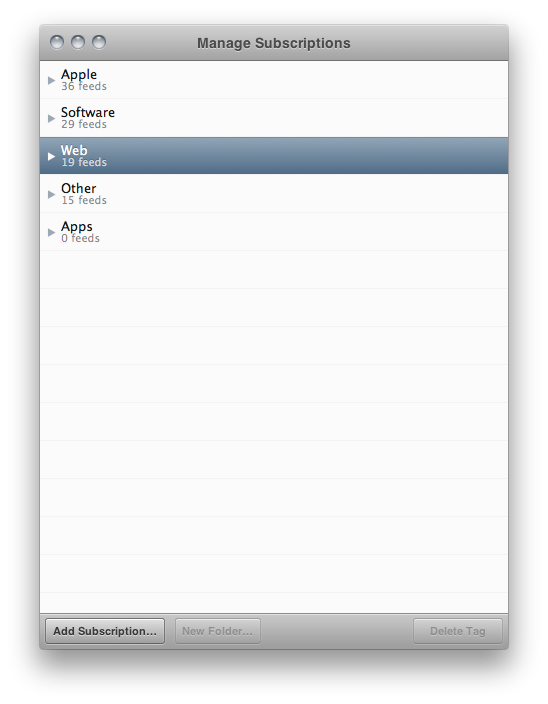 Reeder for Mac supports a variety of online services (like Instapaper, Zootool and Pinboard) and actions to share and open links, and each one of these can be placed in the app’s top toolbar and assigned a keyboard shortcut. Shortcuts can be created by the user, and this final, public version also lets you modify the built-in keyboard actions for navigating between feeds, starring items, sync, and so forth. For the keyboard lover, the new Reeder for Mac is a dream come true. 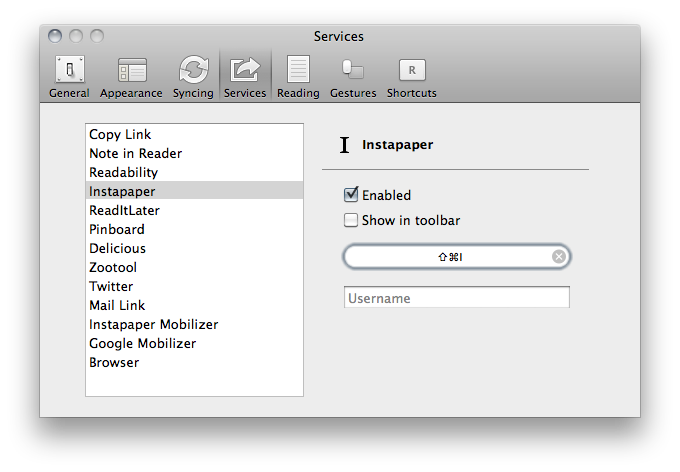 From my previous reviews of Reeder for Mac:

Reeder allowed me to close that Google Reader tab which was constantly open in the browser. For someone who depends on Google Reader on a daily basis, that’s a pretty big deal.

With minimized mode, more gestures and an iOS-like approach to news reading, Reeder for Mac leads the way for great things to come.

Great things have come. Reeder for Mac may not appeal to everyone, and I’m sure the hardcore RSS Mac people out there will stick to their NetNewsWires. Regardless of how I look at it, after all the versions I’ve tested and the changes I had to get used to, I can’t help but notice how, just like iPhone and iPad apps before it, Reeder for Mac is the best thing that happened to my RSS workflow since, well, NetNewsWire. The combination of gestures and keyboard shortcuts, the ingenious design and attention to detail, the powerful feature set – all these features contribute to making Reeder a solid, reliable and beautiful Google Reader client.