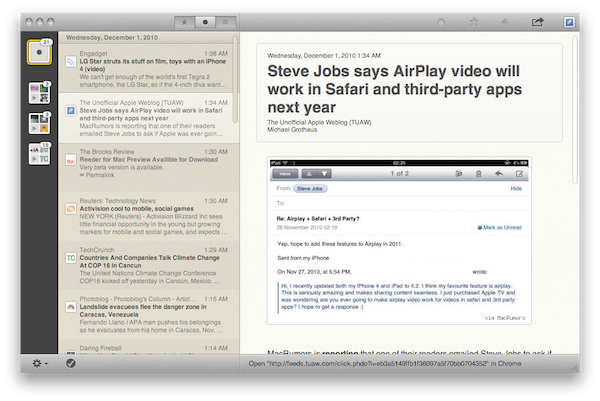 Reeder developer Silvio Rizzi promised a public beta of Reeder for Mac by the end of November and he didn’t break his promise: Reeder for Mac “draft 1” is now available for download here. Reeder comes to the Mac after two very successful iterations on the iPhone and iPad (our review of the iPad version here).

This is a first rough beta of the app, which has been in the works for several months now, and it’s still missing key features such as in-app feed management, search and downloads. The application is already pretty fast and stable, but it can’t be considered a final version at all. Feedback can be submitted to: mac@reeder.ch.

A lot of things have changed since our exclusive first look at Reeder for Mac months ago. Rizzi has been busy polishing the overall feeling of the app and adding features (especially sharing ones); he completely redesigned the navigation of unread items in Google Reader by putting folders and subscriptions in “boxes” sitting in a left sidebar, he tried a more iPad-like approach.

Reeder for Mac is going to be huge, and this is just the beginning. I guess the app will eventually find its way to the Mac App Store after initial testing. Look for a detailed review of Reeder “Draft 1” on MacStories tomorrow.