I tried many RSS readers for iPhone, and by “many” I mean more than 20. The problem is, there are thousands of RSS readers out in the AppStore and as you can guess, it’s pretty difficult to discover good apps when there are 3.000 apps in that Category. But anyway, I tried many and in the end the best were the most popular: Byline, NetNewsWire, Newsstand.

Now, among these three ones my final choice until a month ago was Newsstand: features rich, great interface, stable and fast. But you know, things change fast.

Step down from the throne Newsstand, we have a new king.

The new king is called Reeder and is developed by Silvio Rizzi. Unlike many other RSS readers I’ve tested and (then) trashed, when you first launch Reeder you’ll notice its stunning interface. You just can’t ignore it. It’s elegant, minimal, sexy yet friendly, with awesome animations and with the right features at the right place. The developer crafted an application with an excellent taste, knowing that many users suffered for the lack of a beatiful RSS reader.

And trust me, it’s even more beautiful than Newsstand. 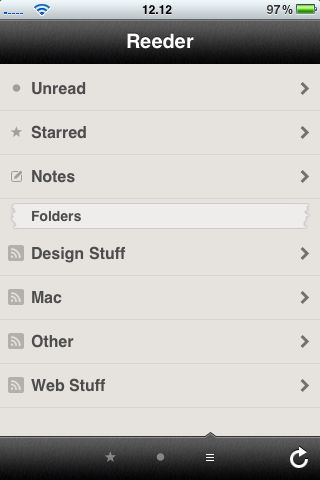 But let’s move on, ‘cause Reeder doesn’t stop at eye-candy. You know, it’s a long way to become the king.

Reeder is not scared by the long way: indeed, it covers all the way with it features. First, Reeder integrates with Google Reader: this means it will sync all your subscriptions with your Google account. If you don’t use Google Reader as your RSS service, I think it’s time to create an account: it’s becoming the standard.

The sync process of Reeder is one of the fastest I’ve ever seen: on the same wifi internet connection, Reeder is faster than any other RSS app I have on my iPhone. Now, I doubt that it depends on some Google Reader outages, so it’s very likely that Reeder is simply better (in the core itself I mean) than other applications.

Reeder’s interface - as I said - is very minimal: there are 4 buttons in the bottom toolbar and that’s it. These buttons basically allow you to switch between starred, unread and the complete lists of your feeds. The last one on the right is the refresh button.

Delving deeper into the UI, you’ll notice a terrific attention for the details: when Reeder is syncing your subscriptions the top toolbar shows “Syncing Subscriptions” instead of the carrier and clock. Nice touch. Or, there’s a tiny arrow above each button in the bottom toolbar, and as you tap on a button the arrow slides with a great animation, much like Tweetie 2 does. Not to mention the whole “notebook” look of the application, with scotch tape and other cool stuff. 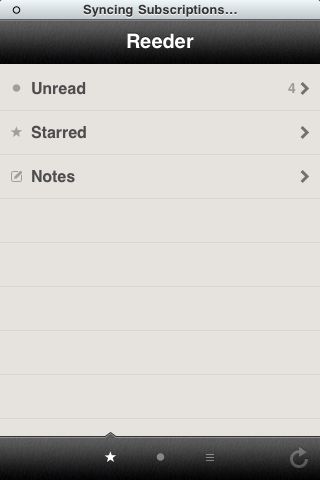 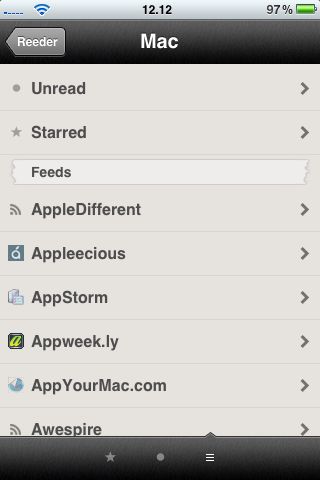 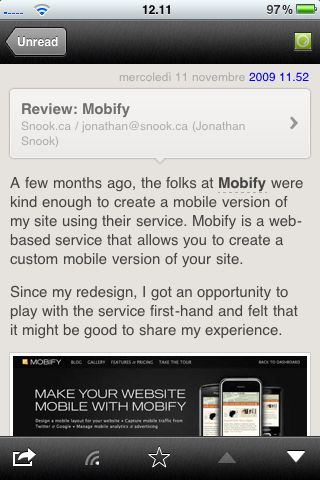 As you choose a website which has unread items you’ll first see a list of all the unread articles before actually reading them. Please notice the little favicon in the top right corner which lets you head over the website homepage and the mark as read button in the bottom left. Once you’ve choosen a feed from the list, you’ll see the standard Google Reader’s stripped down version of the post and it’s pretty sexy in Reeder you know.

New in version 1.1 (released today) you can save a post to Instapaper, Read it Later, Delicious or send it via mail to a friend. I wonder who still uses this feature, but that’s it. 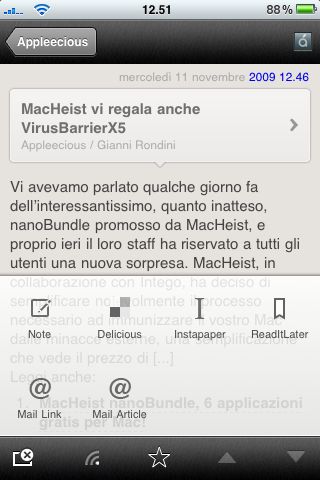 The 3rd party services integration was a big lack of the previous versions and Silvio exceptionally implemented it in 1.1. Just as the sync process, the “Save to..” one is fast and painless. Unlike many other apps Reeder doesn’t have in-app settings, you’ll have to fill out your Instapaper details into Settings.app (Bjango developer wrote an interesting post about the “Settings in Settings.app” problem, read it here) which is pretty unusual today, I wish the dev will put them into the app in the next update.

Now, you should consider a few aspects: Reeder is amazing. Interface, features, animations, speed, price. Reeder comes at the price of $0.99, which is stunning considering of much it offers to the user. The app is on sale, so you’d better go buy it now.

It’s the new king because just as in every good story, Reeder started from nothing and showed everyone how to be a RSS reader today. It stands out from the crowd of overpriced apps with a few features by letting the users do almost everything at 0.99. It stands out from the crowd of terrible interfaces by providing a gorgeous UI. Reeder taught to applications like Byline and Newsstand that an app should be updated often, because the users like support and fresh new features.

The king is dead. Long live the king!