Last year, we awarded Noir Best New App of 2021 as part of the MacStories Selects Awards. Jeffrey Kuiken’s Safari extension for the iPhone, iPad, and Mac, which can apply a custom dark mode to websites that don’t offer their own, is a fantastic example of an app that implements a new technology – the native Safari extensions introduced with iOS and iPadOS 15 and earlier on the Mac – in a way that is simple to use but also provides advanced customization for users who want that. Noir immediately became a MacStories favorite on launch, and it remains an app that I rely on every day.

The latest update to Noir takes the app’s original concept a step further with new theming options, theme sharing, and extensive keyboard shortcut support. It’s an excellent update that anyone who likes to tweak the colors used in their apps will appreciate. Let’s take a closer look. 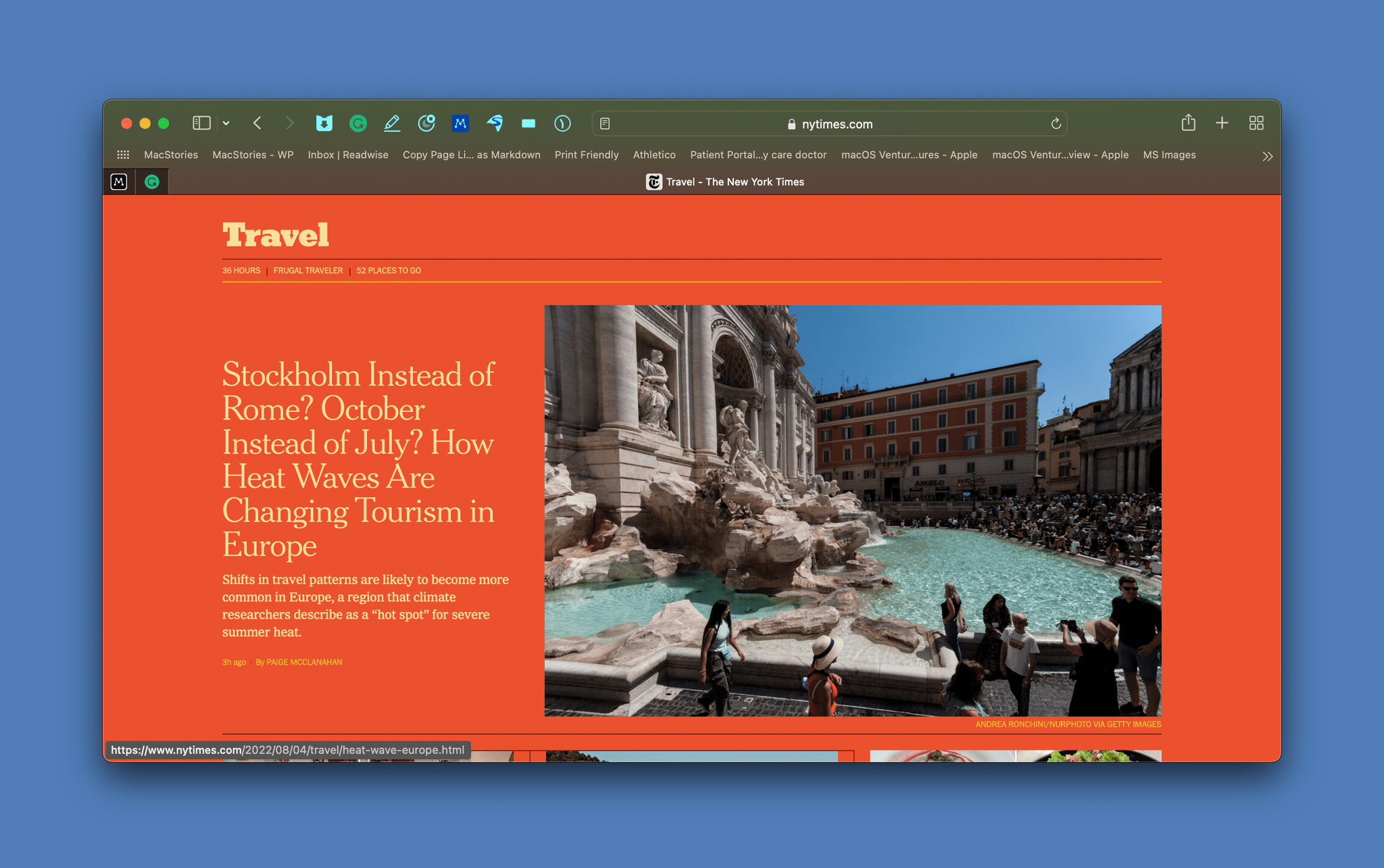 The centerpiece of Noir’s latest updates is its substantial expansion of the app’s library of pre-made themes and the ability to create your own. The app now has a library of more than 20 themes that are accessed from the Theme section in each version of the app. The top of the section includes your active themes, followed by buttons to create a new theme or browse the library of pre-built themes. 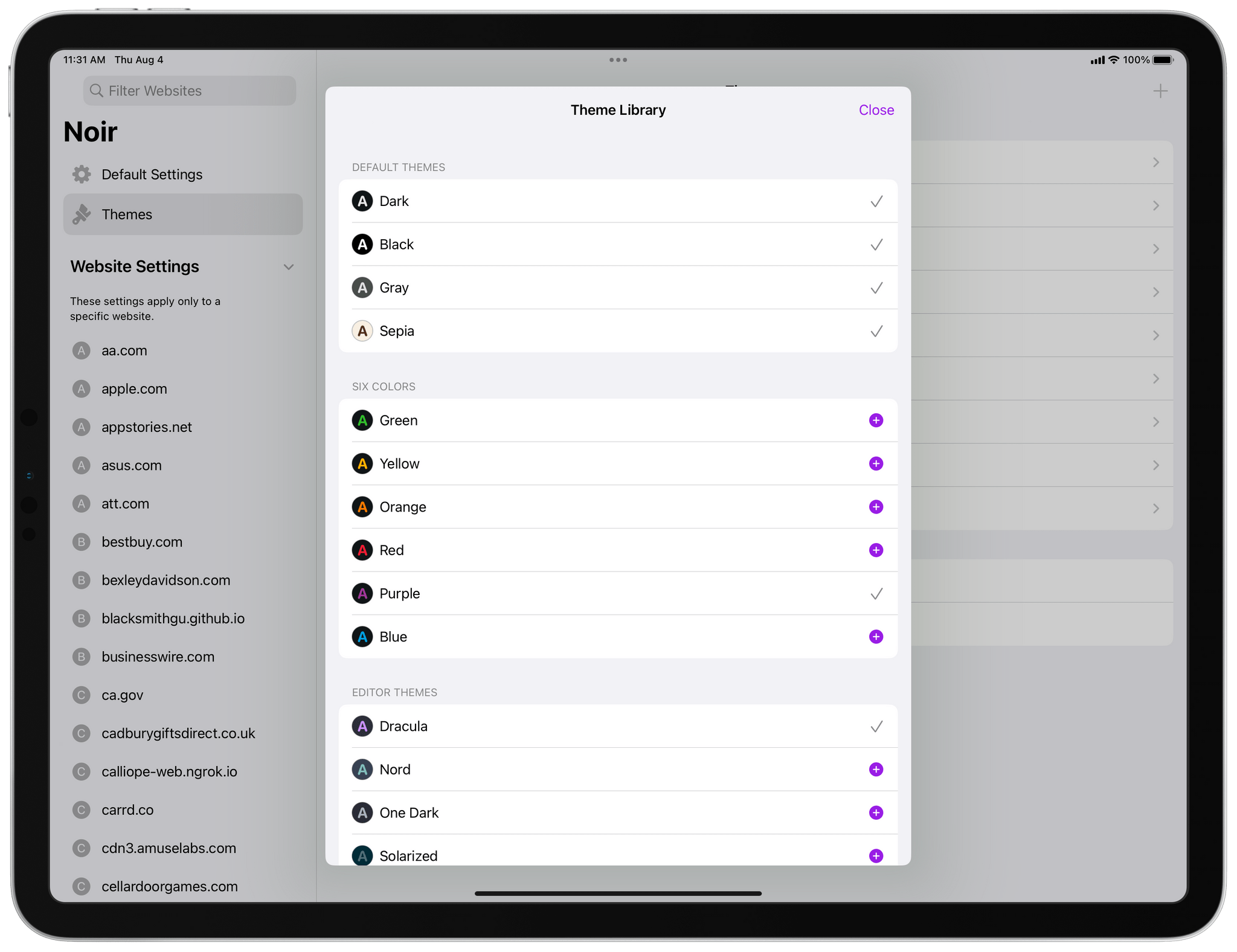 The pre-built themes are organized into collections like ‘Six Colors,’ ‘Editor’s Themes,’ and ‘Moody.’ The icon next to each theme provides an idea of what the theme will look like, and selecting a theme adds it to your list of installed themes. Once installed, you can open any theme for a preview of what it will look like in practice, followed by controls to pick background and text colors, adjust image brightness and apply a grayscale filter. Every theme can be edited, and if you don’t like the changes, you can also reset it to its original look. 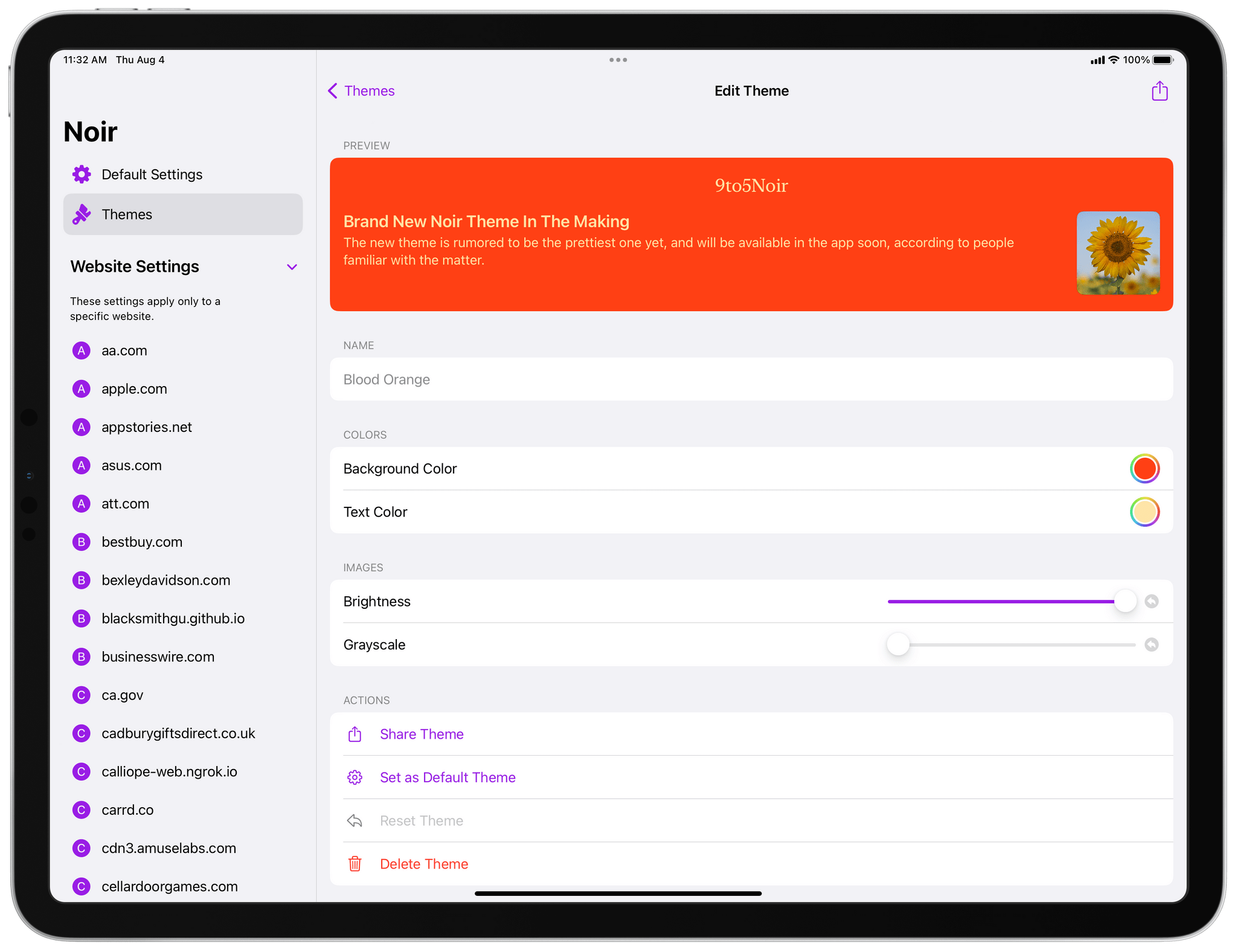 You can edit existing themes or build them from scratch.

Building your own themes works just like editing an existing theme. The theme editor starts with white text on a black background. Selecting the background or text colors in the editor opens the system color picker, allowing you to pick whatever color you’d like to use for the background and text. You can also adjust the brightness and add a grayscale filter for website images. Give your theme a name, and it will appear alongside any of the other themes you’ve added to the app. Themes sync via iCloud, too, so they’re available wherever you’ve installed the app.

Themes can be shared with the share button that generates a URL defining the name, colors, and other parameters you picked for your theme that looks like this: https://getnoir.app/theme?name=John%E2%80%99s%20Theme&bg=182530&text=DBB745&imageBrightness=0.93. 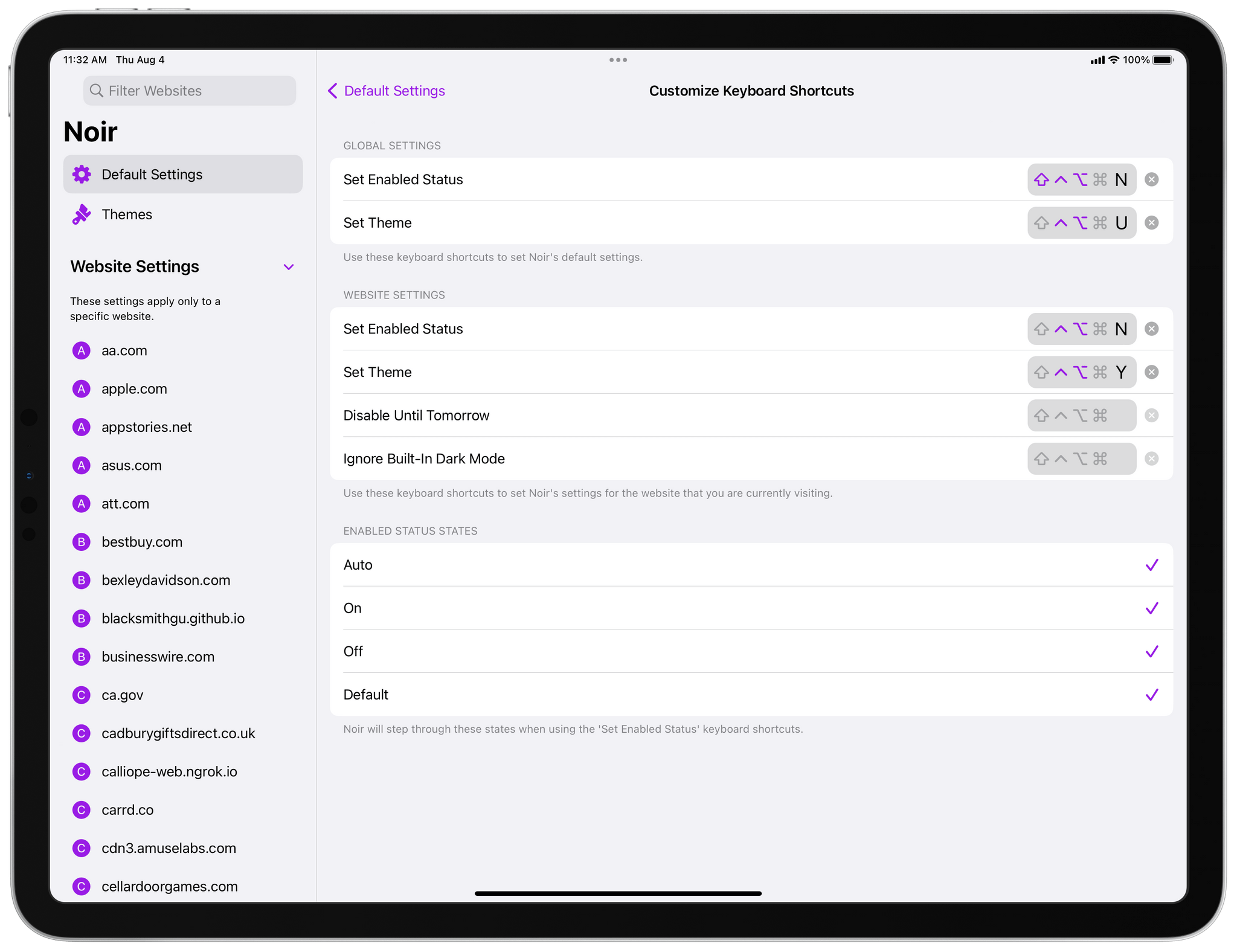 Noir’s keyboard shortcut support for the iPad and Mac has been expanded too. Global keyboard shortcuts allow you to define a combination of keys to change the app’s default status among Auto, On, Off, and Default and cycle among your themes. Keyboard shortcuts can also be defined that operate on a per-website basis to set the app’s status and theme, disable Noir until the next day, and ignore any built-in dark mode the app detects on a website. I had some trouble assigning multiple modifier keys to a keyboard shortcut on the Mac, but the process worked smoothly on the iPad.

I’m pretty picky about my dark theme colors, which makes Noir’s update perfect for me. The app has a lot of good pre-defined choices, but the first thing I did when I tried the latest update was to use the system color picker’s eyedropper tool to create a theme with the same color scheme I use to write in Obsidian. It’s nothing fancy – just a dark gray background with light gray text, but I like the level of contrast for writing in dark mode, and now, I’ve got the same familiar look for reading in bed at night, which is great. Noir was already one of my favorite Safari extensions, but it’s even better now, so if you haven’t given it a try, I highly recommend downloading it from the App Store.