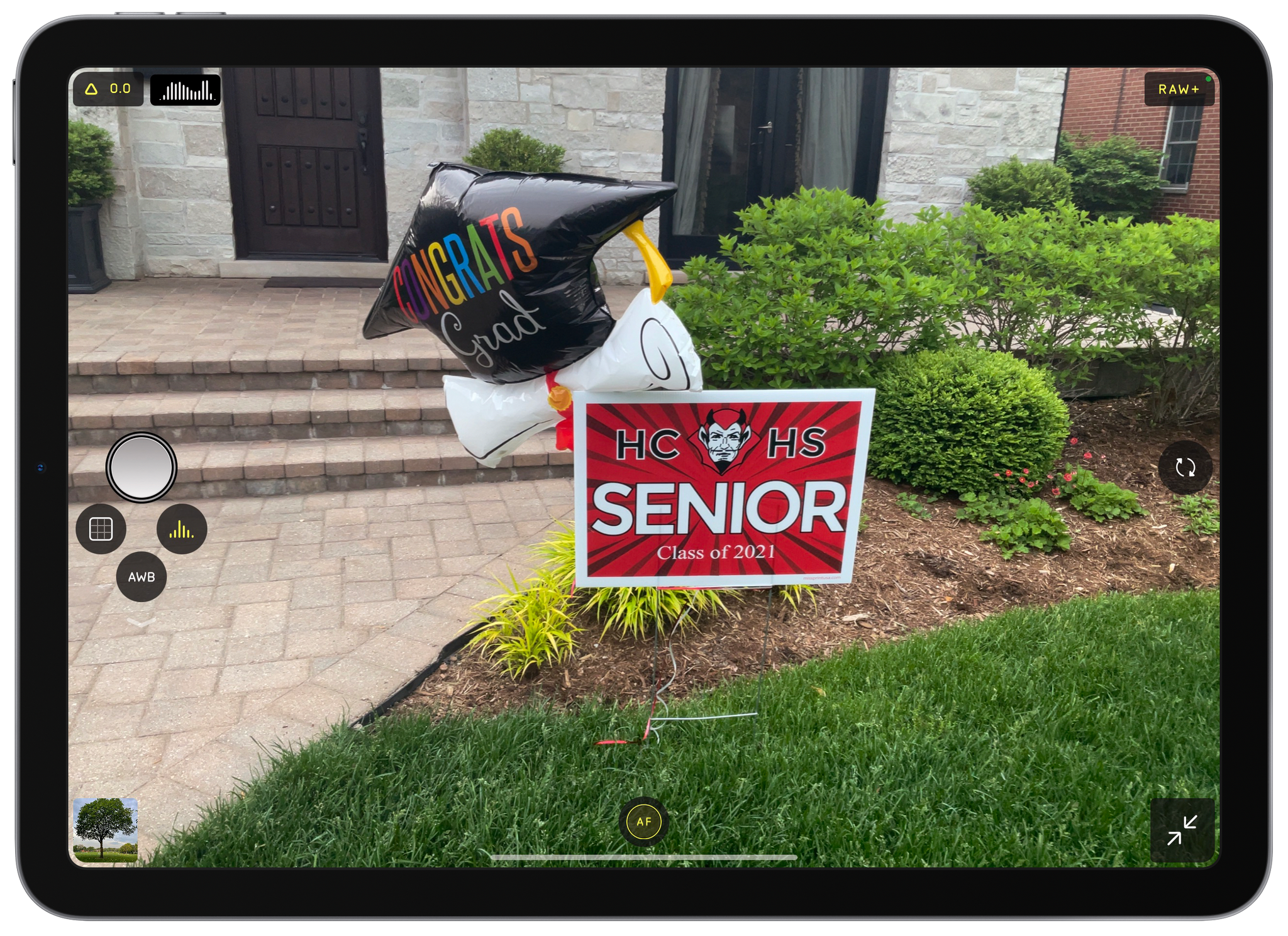 Students are finishing up the year here in the US, and nothing says graduation season like a relative gripping an iPad with two hands to snap photos of a graduate at a family gathering. It’s easy to poke fun at iPad photography, but those aren’t easy shots to get with Apple’s tablet. Both of your hands are occupied, and the viewfinder is huge and partially obscured by the app’s UI. If you’re at one of these events and see a relative struggling to take the perfect family portrait with their iPad, before you assume that they cut you out of the frame on purpose, show them Halide. The brand new iPad version of the app from the team at Lux makes taking iPad photos more natural and, of course, offers all the advanced features available in the iPhone version of the app.

I don’t take many photos with my iPad, and I doubt I ever will. The camera hardware isn’t as good as it is on the iPhone, and I don’t find myself in situations where I have my iPad but not my iPhone. However, once in a while, I’m using my iPad and want to capture a moment quickly without digging my iPhone out of my pocket. For those occasions, I’m going to use Halide because the app’s thoughtful design makes the experience far superior to other camera apps I’ve tried on the iPad.

I’ve covered the iPhone version of Halide before, so I’m going to focus on what makes the iPad version of the app unique. For more on the many pro-level photography features in Halide, be sure to check out our past reviews. With a swipe down on the controls beneath the shutter button, three more are revealed.

Halide solves the two-fisted iPad death grip by placing the most commonly used controls right under your thumb. The shutter button sits at the midpoint of the right edge of the iPad by default. Beneath it are grid, histogram, and auto white balance buttons and a downward-facing caret. With a downward swipe anywhere beneath the shutter button, three additional controls are revealed: flash, timer, and settings. You don’t need to precisely tap the caret to reveal the controls either. Halide uses a ‘sloppy swiping’ gesture, which is perfect when you’ve only got your thumb available for controlling the app. When you’re done with the controls, swipe up to hide them away again.

Halide for iPad can be configured for left-handed people.

The interaction with the shutter button and six controls arrayed beneath it is handy, but my favorite feature is the degree of customization offered. The biggest revelation for me was swapping the side of the screen on which the controls appear. I’m left-handed and moving the shutter button and other controls to the left side of my iPad immediately made taking pictures feel more natural. Also, even if you don’t want to switch the controls around, give it a try because the animation as the controls switch from one side to the other is delightful.

Moving controls from one side of an app to the other isn’t new. It’s common in a lot of drawing apps, but I haven’t seen it in many apps beyond that category and never in a camera app. Not every app would benefit from swappable controls, but I hope Halide’s clever implementation encourages other developers to consider whether their apps would benefit from leftie customizations too.

Halide’s customization options extend to the UI beneath the shutter button too. By default, the viewfinder grid, histogram, which can be toggled between a mini and much larger iPad-appropriate size, and white balance controls sit below the shutter button. However, from Halide’s settings, you can promote the flash or timer buttons, so they are always visible onscreen. The remainder of Halide’s controls are found along the edge and in the corners of the screen, where the buttons follow the iPad’s curved corners.

Halide’s Pro View pulls the viewfinder in from the iPad’s edges to make it easier to compose a shot.

The other issue Halide solves with its iPad app is one that I hadn’t ever considered. There’s a double arrow button in the corner of the screen that activates Halide’s ‘Pro View.’ Tap it, and the viewfinder shrinks into the center of the screen, allowing a clear view of the shot you’re framing.

The Lux team says that iPads are typically held closer to your face when framing a shot, making it harder to take in the full scene when the viewfinder extends to the edges of the screen. The issue is compounded when controls obscure part of the view. I’ve only had one day to use Halide’s iPad app, but I immediately preferred the smaller viewfinder, which makes framing a shot easier without being so small that it’s hard to make out details.

Halide for iPad isn’t going to turn me into an iPad photographer. However, I’ve been to enough graduation parties and sightseeing destinations on family vacations to know there are plenty of people for whom the iPad is their camera. For them, I’m glad Lux has gone to the trouble to build an app specifically designed for the iPad’s hardware and the way it’s used. You won’t find another camera app that’s been so carefully crafted with the iPad in mind.

I’m also glad that I’ve got Halide as an option on my iPad. The controls are customized for the iPad, but will be familiar to anyone who has used Halide before. I may not use it often, but it’s great to know the app is available on the iPad when I want it.

The iPad version of Halide is available for download on the App Store as a universal purchase along with the iPhone version of the app. New users can try the app for free and then subscribe or purchase Halide for a one-time payment.