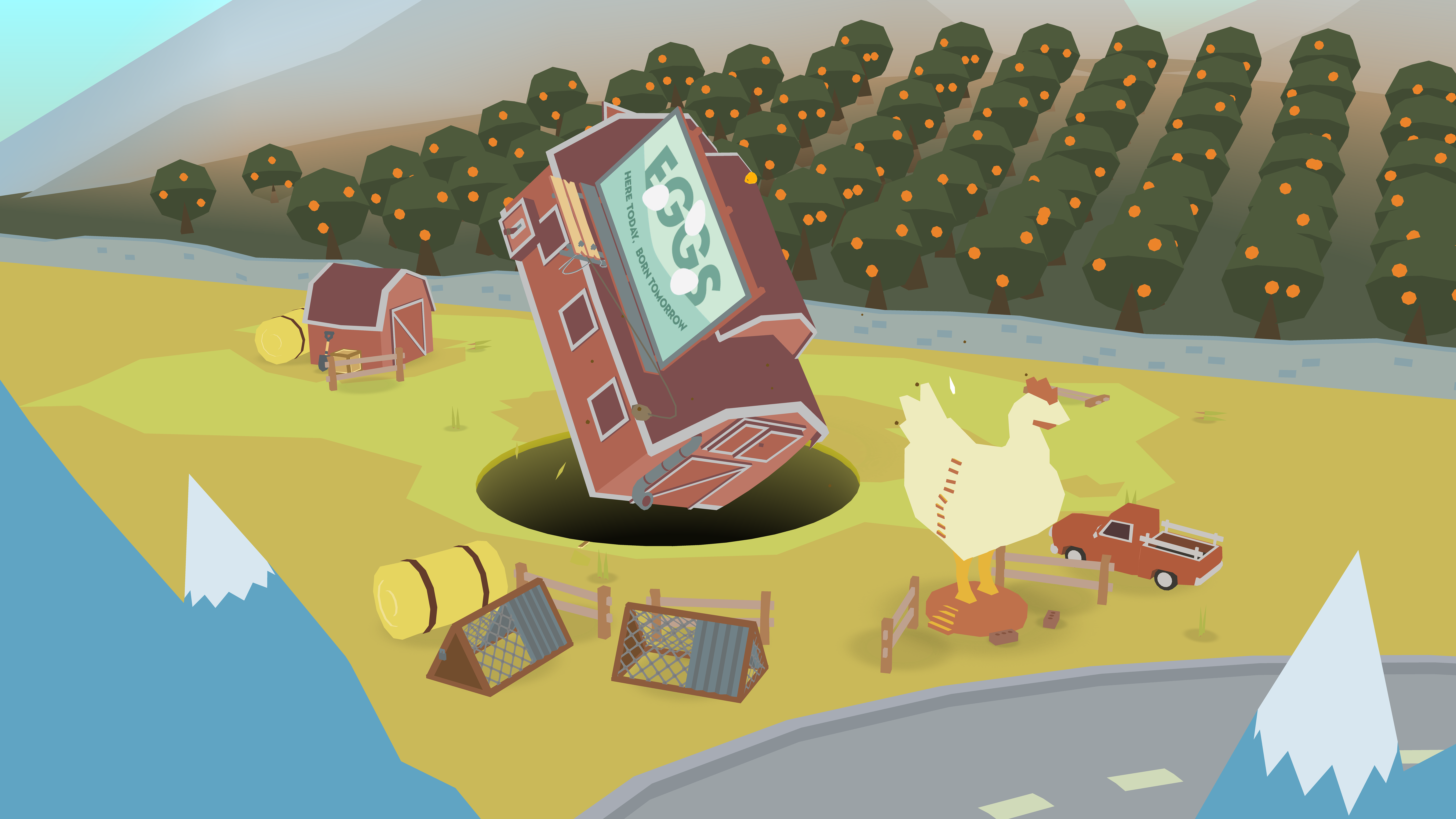 Tomorrow, Donut County by developer Ben Esposito will be published by Annapurna Interactive, which also backed the critically-acclaimed Florence. The game, which was announced in 2014, but has been in development since 2012, tells the story of a raccoon named BK, his friend Mira and an assortment of other characters from Donut County who are trapped 999 feet beneath the surface of the Earth. You play by manipulating a hole that grows as you move it across the landscape swallowing objects. If the premise sounds strange, that’s because it is, but it also works through a combination of a clever game mechanic, funny writing, and engaging sound design and artwork.

Donut County is an adventure game that relies on physics and puzzles to drive the narrative across 24 levels. The first phase of the game explains how BK, Mira, and their neighbors ended up underground. The group sits around a campfire telling pieces of their backstory to each other interspersed with flashback-style to gameplay where you manipulate the hole to deliver that character and its surroundings underground. Your hole starts small, so part of the trick is to begin by capturing smaller objects and grow your hole until the bigger ones fit.

Along the way, Donut County also presents puzzles that must be solved to complete each level. The puzzles aren’t very challenging, but they add variety saving the game from being one-dimensional and giving players a reason to explore levels thoroughly. As the game progresses, your bag of tricks for solving puzzles increases too, which keeps things fresh.

Also, it’s a small touch, but at the beginning of each level, Donut County shows the time and your battery’s status. It’s a nice feature for laptop players who might otherwise get lost in the game and find themselves suddenly shutting down as their battery dies. 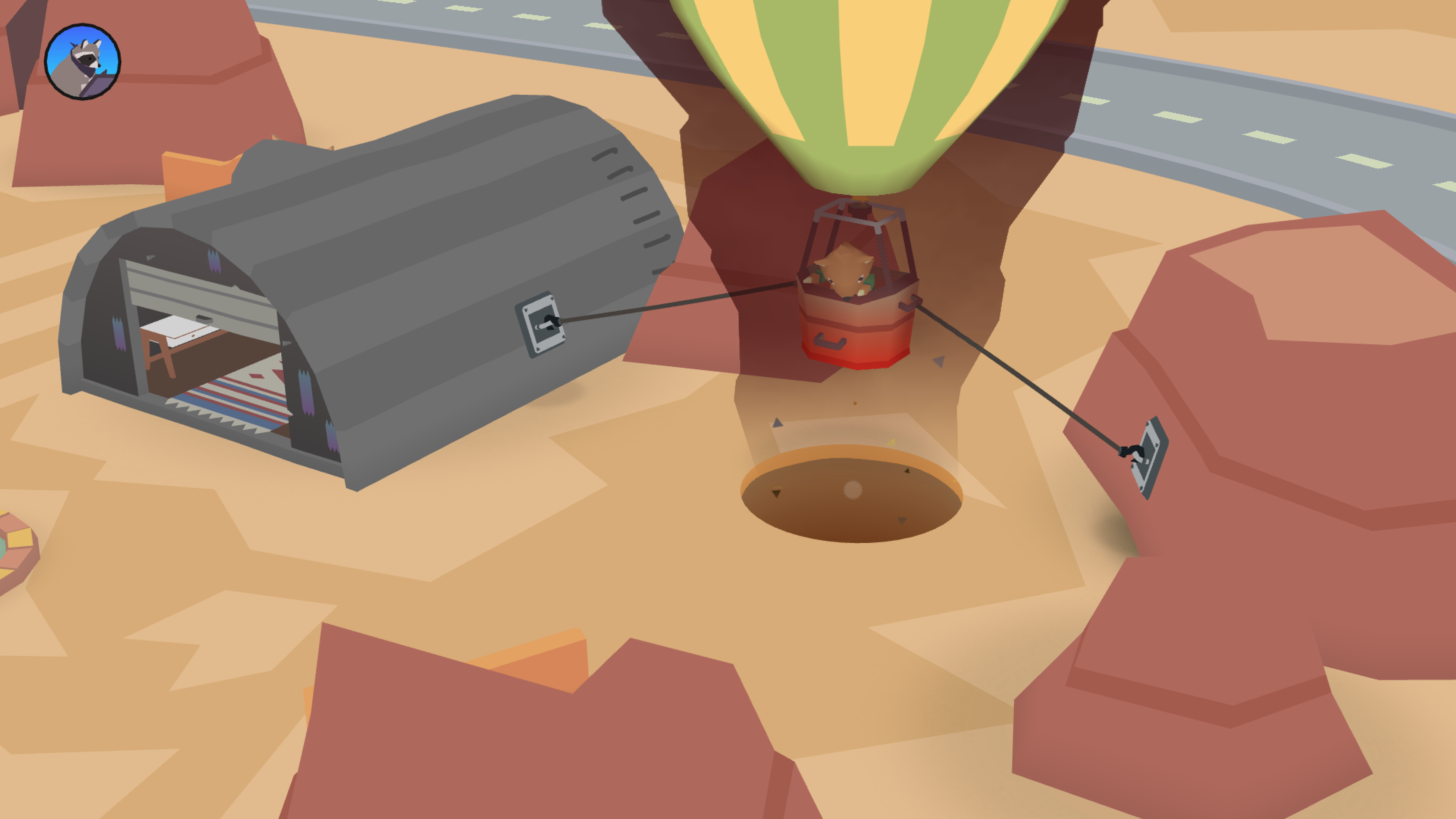 After Donut County establishes why everyone is 999 feet below the Earth’s surface, the story turns to how to escape and fix the mess BK has created. You return to the surface, maneuvering your hole to solve another series of puzzles that ultimately lead to a boss fight with the Trash King.

Donut County is funny and snarky throughout but has a more serious side too. The game is a story of self-discovery for BK who starts out oblivious to the harm he’s caused around himself. Esposito, who lives in Los Angeles, has said the story is an allegory for L.A.’s gentrification and how technology played a part in it. That may seem like a heavy message, but it works in the game because it’s delivered through witty dialogue and is never treated in a heavy-handed way. 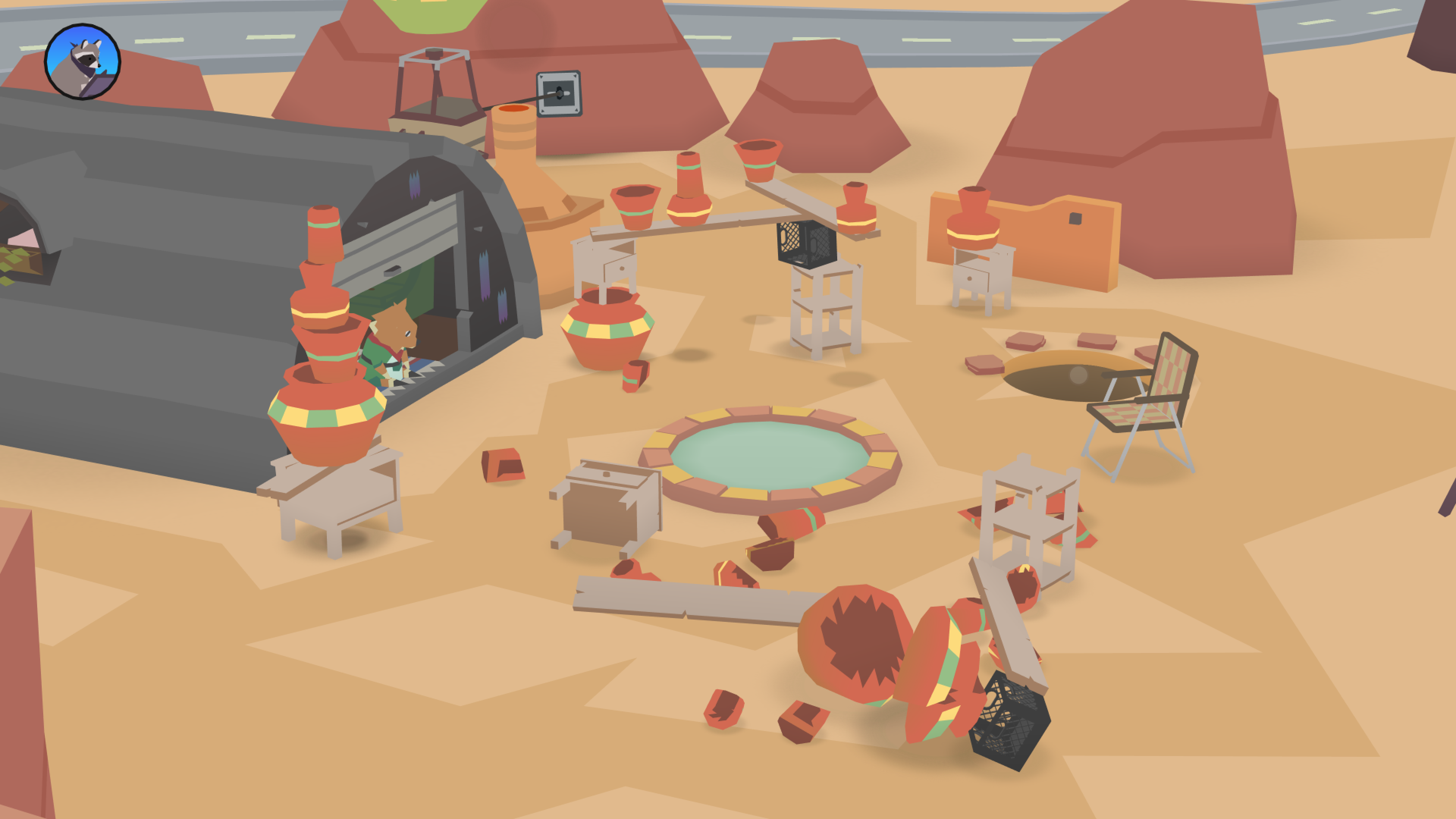 Donut County isn’t a long game. I played the Mac version of the game over the weekend and completed it in about 4 hours, taking my time to explore every aspect of each level. Once finished, you can go back to replay any level or restart, overwriting your completed game. There’s also a Trashopedia where you can browse all the items that have dropped into your hole during the game.

I played on my 2016 13-inch MacBook Pro in clamshell mode on a 27” 4K LG display and connected to external speakers. The big screen was a great way to experience the colorful landscapes of each level. External speakers were a plus too because the sound design adds a lot to the experience. The one downside to playing on my MacBook, of course, is that Donut County got the fans spinning loudly, but that’s been true for almost any game I play on my MacBook. 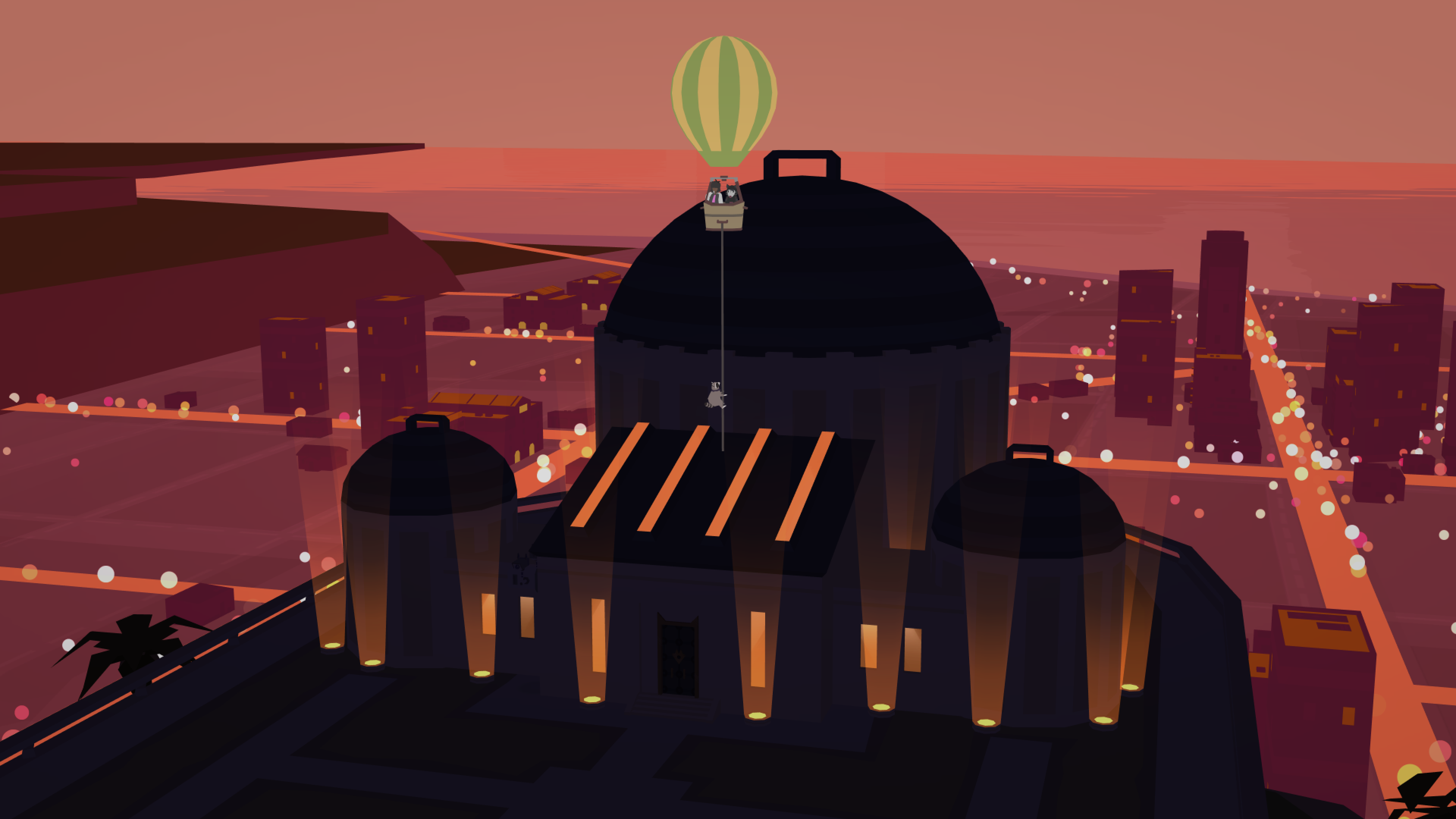 I ran into a bug the first time I played through Donut County. The game played as though it had been slowed down. Everything animated smoothly, and the sound was fine, but the cursor control was laggy, and the animations were slightly slower than they were supposed to be. Also, the game froze up in one of the last levels of the game and during the boss fight. Switching to windowed mode and then back to full-screen cleared up the issue and I wasn’t able to recreate it, so it may not be a serious bug, but it’s still worth mentioning in case you see similar behavior.

One other small issue I have with Donut County is that the app icon sticks out like a sore thumb on macOS. It’s not something that affects gameplay, but the square, flat artwork of BK grasping a donut in his mouth doesn’t fit with typical macOS icon design or the level of polish found in the rest of the game, which is too bad. 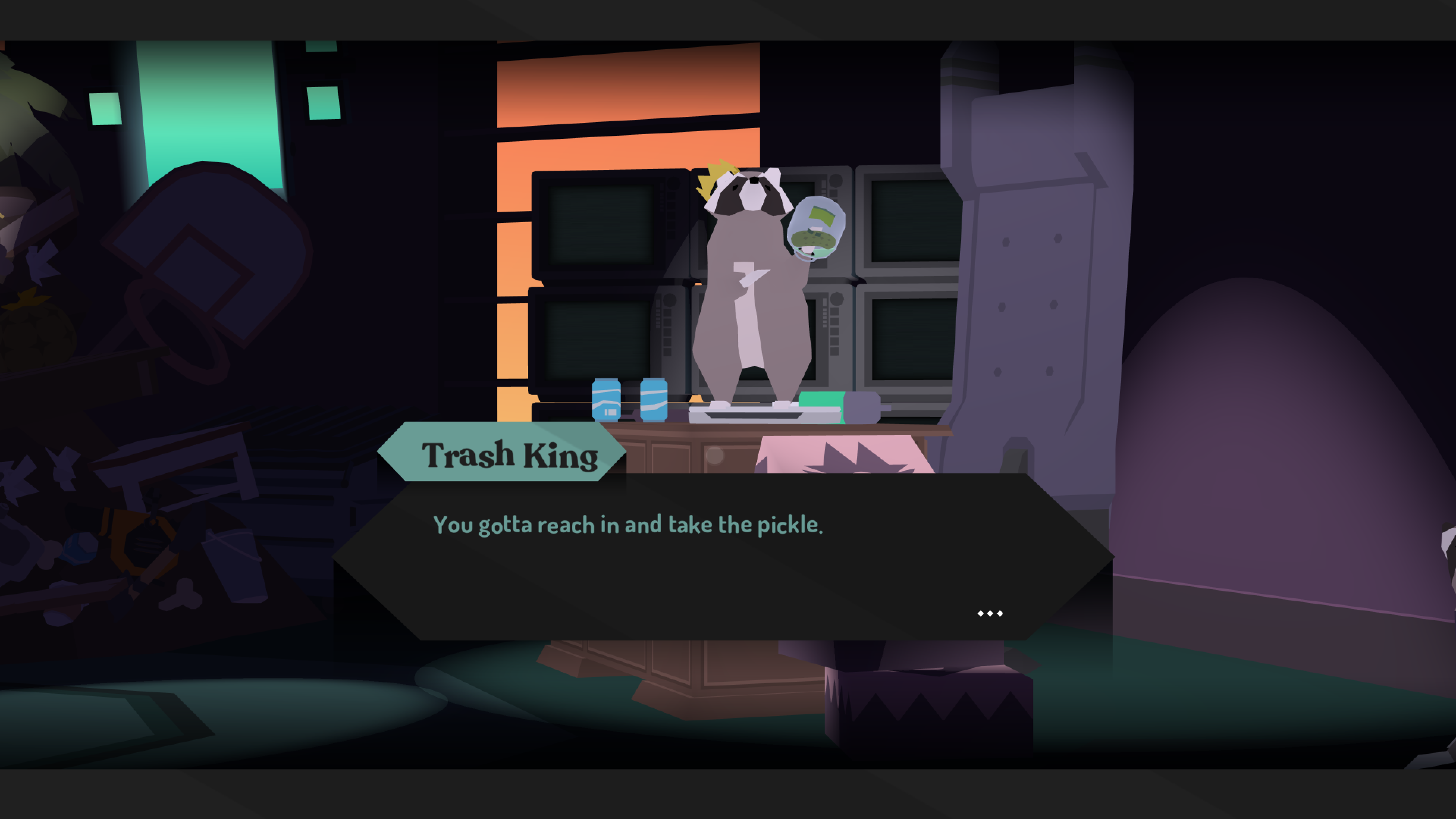 Overall though, I enjoyed Donut County a lot. It isn’t a game I’ll return to over and over because once you know how the puzzles work and the story, there’s not much reason to play again. However, it’s extraordinarily entertaining to cause all manner of items to drop into a hole, and I also enjoyed the story and accompanying dialogue among the game’s characters. Donut County is like a short but satisfying novel that you can knock out in a day on a quiet weekend that leaves you glad for the experience, but wanting just a little more.