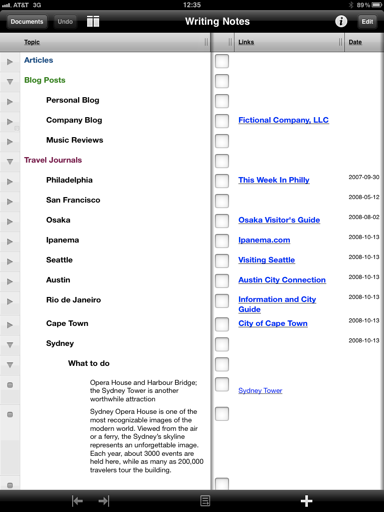 Stronger than ever thanks to an incredibly successful launch of OmniFocus for iPad, the constantly increasing OmniFocus userbase on all platforms and the hype surrounding all their products, Omni Group’s CEO Ken Case gave some details of the company’s roadmap for 2011 at Macworld Expo. The three key products seem to be OmniFocus 2 for Mac, coming later this year and highly inspired by the iPad app, a brand new OmniPlan with cloud sync and collaboration features, a version of OmniOutliner for iPad. Personally, I’m really excited about the overhaul of OmniPlan, which will also get OmniFocus integration:

The new syncing back-end is also designed to work with OmniFocus, which will let individual team members sync tasks assigned to them with either the desktop, iPhone, or iPad versions. “All three versions use the same underlying engine, so once we have that update in place, we’ll be able to roll out OmniPlan syncing to all versions of OmniFocus,” Case told Ars.

The current version of OmniPlan allows syncing via CalDAV, but the new engine will offer much better integration with OmniFocus. For project team members who don’t need to see what all other team members are working on, they’ll be able to see just the tasks assigned to them. When tasks are marked as complete in OmniFocus, the project manager will get a notification of the change in OmniPlan.

We can’t wait to see what will the new OmniPlan look like, and the two-way sync with OmniFocus sounds like a killer feature to me. Not to mention OmniOutliner for iPad, which will be demoed for the first time at Macworld today and is set to ship sometime in the next few months. What you see above is a screenshot of an early build Ars Technica was provided, but I guess the UI will change come the final release (remember the first mockups of OmniFocus for iPad?).

Last, OmniFocus 2 for Mac will be released “later this year”, although the Omni Group (as usual) doesn’t set any deadline. When it’s ready, it’s ready. We just know the feedback for the iOS apps (especially the iPad version) has been huge, and OmniFocus 2 will be built on top of that.

Looks like the Omni Group is off to a great start in 2011.