Since their release in February, IFTTT’s Do apps have become some of my most used utilities for one-tap commands triggered from my iPhone. Today, IFTTT is extending the Do line to the iPad, and, more importantly, they’re bringing the power of web automation to Apple Watch.

The concept behind Do Note, Do Button, and Do Camera is deceptively simple: IFTTT has a vast array of connected services, and the Do apps make it easy to run recipes using iOS as an input machine. Whether it’s text, taps, or images, IFTTT has abstracted much of the ‘recipe’ building and triggering process from its dedicated apps, focusing on activating recipes with simple interactions that are well suited for iOS.

As I wrote when the Do apps were released:

I’ve only started playing with the apps now, but I think this is precisely what IFTTT needed. For years, I tried to set up workflows to automate text and photos with IFTTT using other apps like Launch Center Pro or email triggers; now, I can open the Do Note app and type a message myself. IFTTT is essentially putting the “If This” part of its system on you, using native apps to type, take pictures, and tap buttons.

Over the past two months, I’ve come to rely on Do Note: I can change the color of my Hue lights by typing a color, I can quickly jot down a new task and send it off to my Todoist inbox, and I can even create a new calendar event in Google Calendar using natural language and IFTTT. Do Button has also been useful in my daily life, allowing me to build a log of my bedtime with Gmail and providing an easy way to trigger my WeMo switch directly from Notification Center. 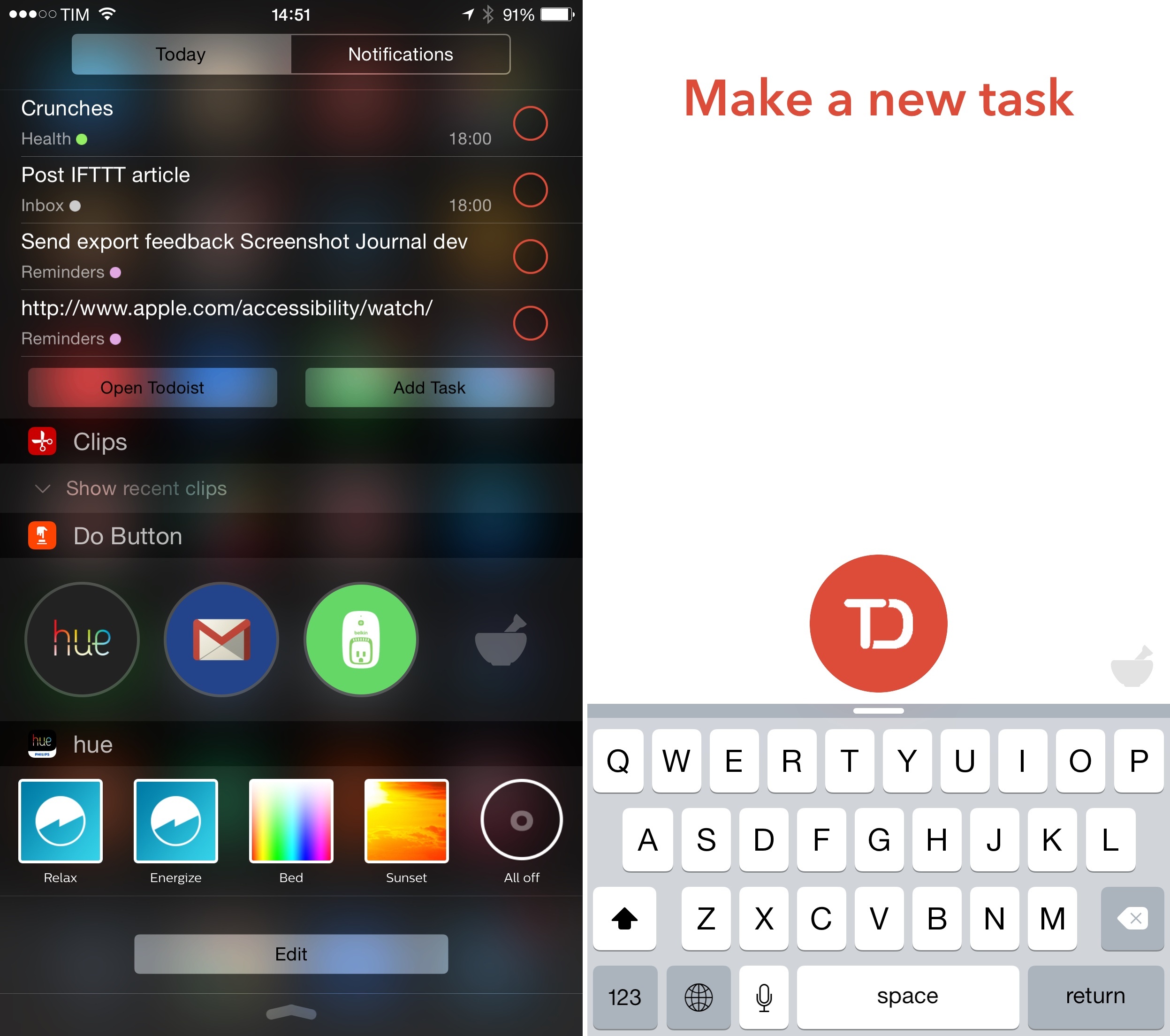 I’ve found great convenience in the slimmed-down approach of IFTTT’s Do apps, but, on multiple occasions, I found myself wishing I could trigger recipes from my iPad instead of having to pull out my iPhone. This is changing today with the apps’ debut on the iPad, which will enable me to integrate IFTTT in my daily workflow of writing, composing email, and managing tasks.

I’m intrigued by IFTTT’s decision to support Apple Watch with Do Note and Do Button, as I believe the immediacy of the Watch is poised to make for an even better platform for this type of apps. Like on the iPhone, you can create up to three recipes that you can scroll through by swiping. IFTTT’s provided examples include basic actions such as saving text to Evernote or activating a Nest thermostat, but you can get creative thanks to the plethora of services supported by IFTTT and create workflows to add a note to a Google spreadsheet or use text as the title for a Todoist task in a specific project.

All this will translate to the Watch through native dictation in lieu of traditional keyboard input. This is why it makes sense for IFTTT to approach Apple Watch as a new platform for web automation: quick input is key to the using the Do apps effectively, and the nimble, natural input methods supported by the Watch – voice and taps in a simpler interface – make for good constraints in IFTTT’s case. Even more than the iPhone, you won’t be tempted to constantly fiddle with recipes and create new ones – you’ll just tap or dictate a note, and trust IFTTT to do everything else for you. And the more you trust the system, the more you rely on IFTTT.

I can see why launching Watch apps could turn out to be a major step for the company: it’s not hard to imagine how, further down the road, IFTTT could use a native SDK on the Watch to access deeper functionality, such as the heartbeat sensor or Force Touch input.

Between Workflow and IFTTT, the Apple Watch is already shaping up to be a powerful companion to iOS automation. Ease of activation is perhaps the highest point of friction in automation on the iPhone and iPad, and the Watch – with its stripped down interface and focus on brief interactions – could become the most convenient way to trigger recipes and workflows, using an iPhone as the engine.

The updated Do Note and Do Button apps will be available on the App Store today.