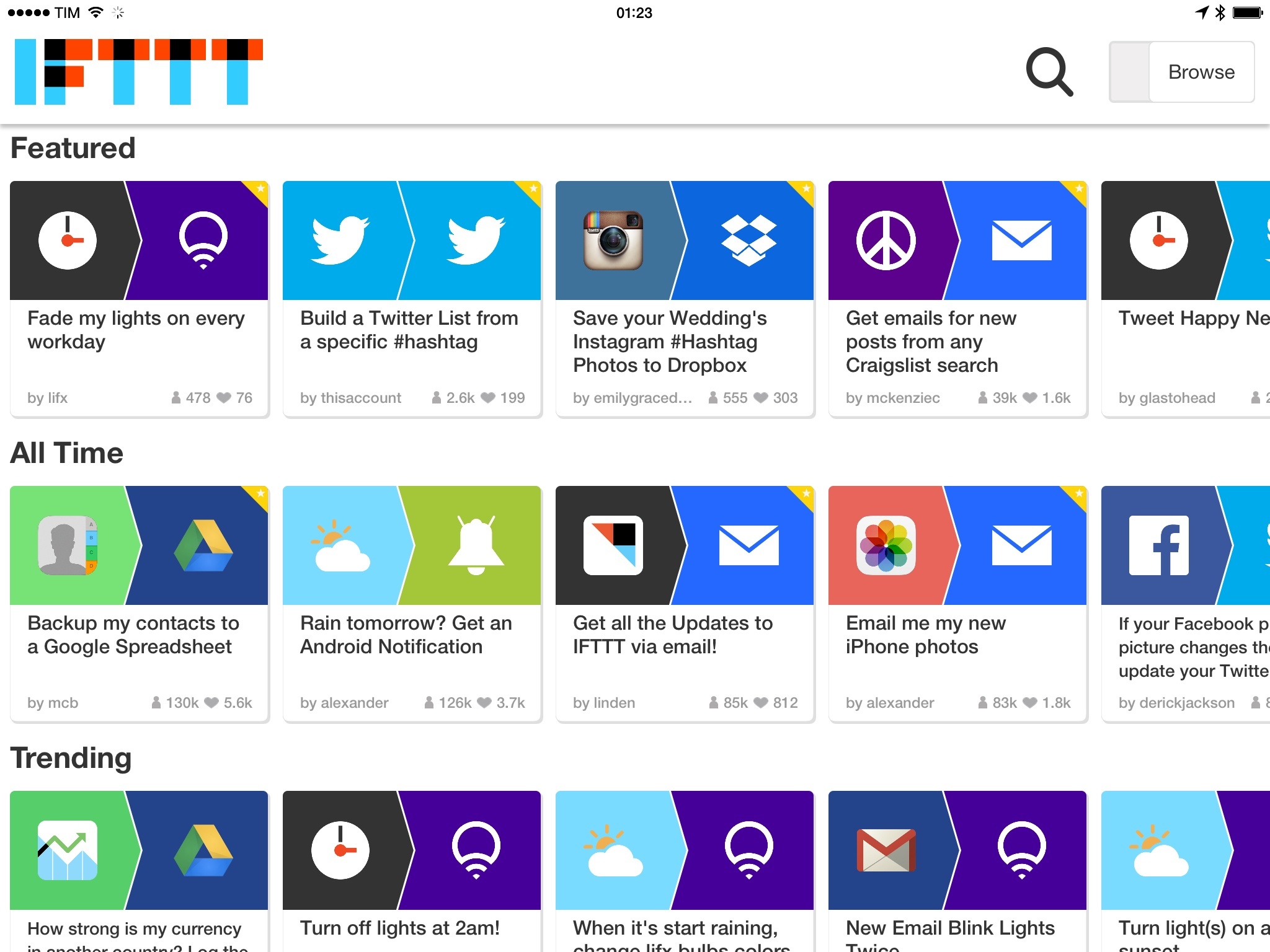 I’ve been thinking a lot about web automation and whether I should keep investing time and money into IFTTT and Zapier when I can’t seem to find problems that need to be fixed. For years, I fiddled with web automation, recipes, and connecting services together, but I’ve never really relied on web automation and I feel like I experimented with it because I liked the idea on principle.

Like others, I started out with IFTTT and eventually sought the more advanced features of Zapier. I like IFTTT’s simplicity and diversity of channels; I enjoy Zapier and its ability to use multiple accounts for each service, parse email messages as templates, and productivity-oriented approach with a fair business model. But I can’t seem to be able to stick with either for the long term and I often make up excuses to keep using them because it’s what geeks do.

There are lots of combinations made possible by IFTTT and Zapier, and I guess that part of the problem is my rusty imagination when it comes to web services, as well as the fact that I rely heavily on native apps and local automation for iOS. Over the years, I did come up with recipes to automate my Internet accounts – things like archiving tweets to Evernote, turning files in Dropbox into todos, and getting push notifications for new entries on an RSS feed or YouTube channel. With the exception of the latter, I stopped using and depending on each recipe at some point, and I didn’t miss it.

I’ve considered my usage of web automation, and I’ve found some basic issues that affect my perspective for this sort of product. While there are hundreds of more specific and advanced uses cases, I’ve identified five common types of web automation:

I’ve realized that my particular work requirements, available hardware, and software taste rarely fall under the kind of scenario envisioned by IFTTT and Zapier.

Furthermore, iOS 8 extensions have removed a huge obstacle that could be avoided, in the old days, with web automation. These days, it takes me two taps to send any webpage from any iOS 8 app to other services (via apps) that offer extensions. I struggle to find a reason to, say, automate my RSS service remotely when its iOS app has a share sheet. As I wrote in September, iOS 8 extensions have changed how I work because of the native functionality they bring to several parts of iOS that used to be isolated and slow.

I also believe that I’d use web automation more for the messaging type of tasks if IFTTT and Zapier were quicker. If I’m going to use a recipe to paste a message in Slack but then it won’t show up for five or more minutes, I might as well just open the Slack app and send the message myself. The same goes for other combinations of apps that I tried over the years: both IFTTT and Zapier seem to be built for an average delay of at least five minutes between the trigger and the action. Even if they’re often quicker than that, I can’t afford to let critical tasks depend on delays or, worse, errors.

Last, a note about Zapier. I’m a big fan of the service’s more advanced options and especially the email parser and ability to connect multiple accounts. I’m using Zapier to receive notifications for new Apple videos and press releases via Pushover, and it works well. I like how Zapier’s ingredients for actions offer more customization than IFTTT and many parts of its UI and creation flow make more sense than IFTTT. But there’s a big issue for me: there’s no way to trigger “zaps” natively on iOS like you can with the IFTTT app or Launch Center Pro’s excellent IFTTT channel. Yes, you can resort to workarounds such as sending emails from Drafts, but you only add more layers of possible failure to a system that’s already built on external integrations. For this reason, even if I wanted to offload some tasks to web automation, Zapier couldn’t be my only service – at least not until they provide better iOS support.

Maybe web automation isn’t really for me anymore. It’s a nice extra, and it’s cool to play around with recipes and see the potential of APIs working together, but I can’t depend on it. Local automation with iOS apps is usually faster and more powerful for me, and I’ve only found a couple of tasks that I want to automate remotely. Right now, besides notifications, I’m logging my Jawbone UP sleep data to Google Sheets (for charts that are actually useful) and I save some expenses to a spreadsheet. And that’s about it.

But I’m still wondering if my lack of imagination could be a problem, and if there could be tasks and workflows based on web automation that could work with the right mix of speed and reliability. Which is why I’ve asked about this today on Twitter – you can find all the replies I got below.

I’ll keep playing around with Zapier and IFTTT. In the meantime, we’ll always have Workflow.

@viticci To move a lot of things into Slack.

@viticci For college: if my professor has a blog, I have IFTTT text me (monitors their RSS feed). Stops me from being surprised.

@viticci save all favorited tweets to Evernote since Twitter search is bad.

@viticci Most-used: “star” an email in Gmail, archive it; behind the scenes, IFTTT passes it on to my OmniFocus inbox.

@viticci turn hue lights on at sunset, thats about it

@viticci I mostly fiddle with them and set up a bunch of crap I don’t use then delete everything; repeat 6 months later

@viticci Kidding aside, I have a few specific notification-based alerts and task connections, no real file operations

@viticci If IFTTT could do what Hazel does for Dropbox, I’d be doing a lot more

@viticci to do great stuff with the lights and wemo plugs

@viticci I use @IFTTT to automate link sharing between things like @instapaper, @googledocs, @evernote, and @Pinboard. One click, many saves

@viticci All email signups for our newsletter ring a gong in Slack.

@viticci I use IFTTT to automatically save Pintrest stuff into evernote and to point Feedly tags at Instapaper, Pinboard, etc.

@viticci for personal (non-business) uses, it’s pretty hard to come up with use cases for IFTTT

@viticci Tried to use IFTTT as a reminder (by location) but it was too unreliable. Now, I use it so I can brag I have 420 apps on my phone.

@viticci IFTTT for amiibo alerts and snow alerts. I’m looking for more ways to use it though!

@viticci I use Twitter for most of my tech blogs and stuff nowadays, but for rarely-updated things, IFTTT Feeds -> Instapaper w/notification

@viticci I don’t use IFTTT a whole lot, but I do use it to upload Instagram photos to my Apple TV’s screensaver. Pretty fun.

@viticci I’ve written two articles a while back on how I use @zapier http://t.co/nWgaCmxIrx

@viticci custom push notifications. Keep tabs on what family is doing online or when something goes live

@viticci or if I save something in reddit, it will auto save in pocket. I check pocket more often

@viticci IFTTT - have it save any Facebook picture I’m tagged in to my camera roll. Also if my nest gets below a certain temp I get a text

@viticci I mostly use it to archive receipts.

@viticci I have a recipe that triggers every time it sees an email with the word “receipt” in it and saves that email in dropbox.

@viticci To send new “hot” posts from my favorite subreddits to Pushover. Log my social media activity to Day One.

@viticci It is not 100% perfect. But it is better than archiving *every* receipt myself.

@viticci made a private titter account for scheduled RTs, via ifttt send to buffer.

@viticci Mostly for social media. I know there are built-in tools I could use instead, but I like seeing all of them in one place.

@viticci Haven’t found a practical use, myself…

@viticci I use IFTTT on iOS to make my Nest thermostat location aware.

@viticci If something is “saved for later” in Feedly, then it gets added to a Google Doc for a podcast idea I’ve yet to act on. :)

@viticci for triggers in LCP to Slack, feed notifications, and uploading screenshots and links to Dropbox