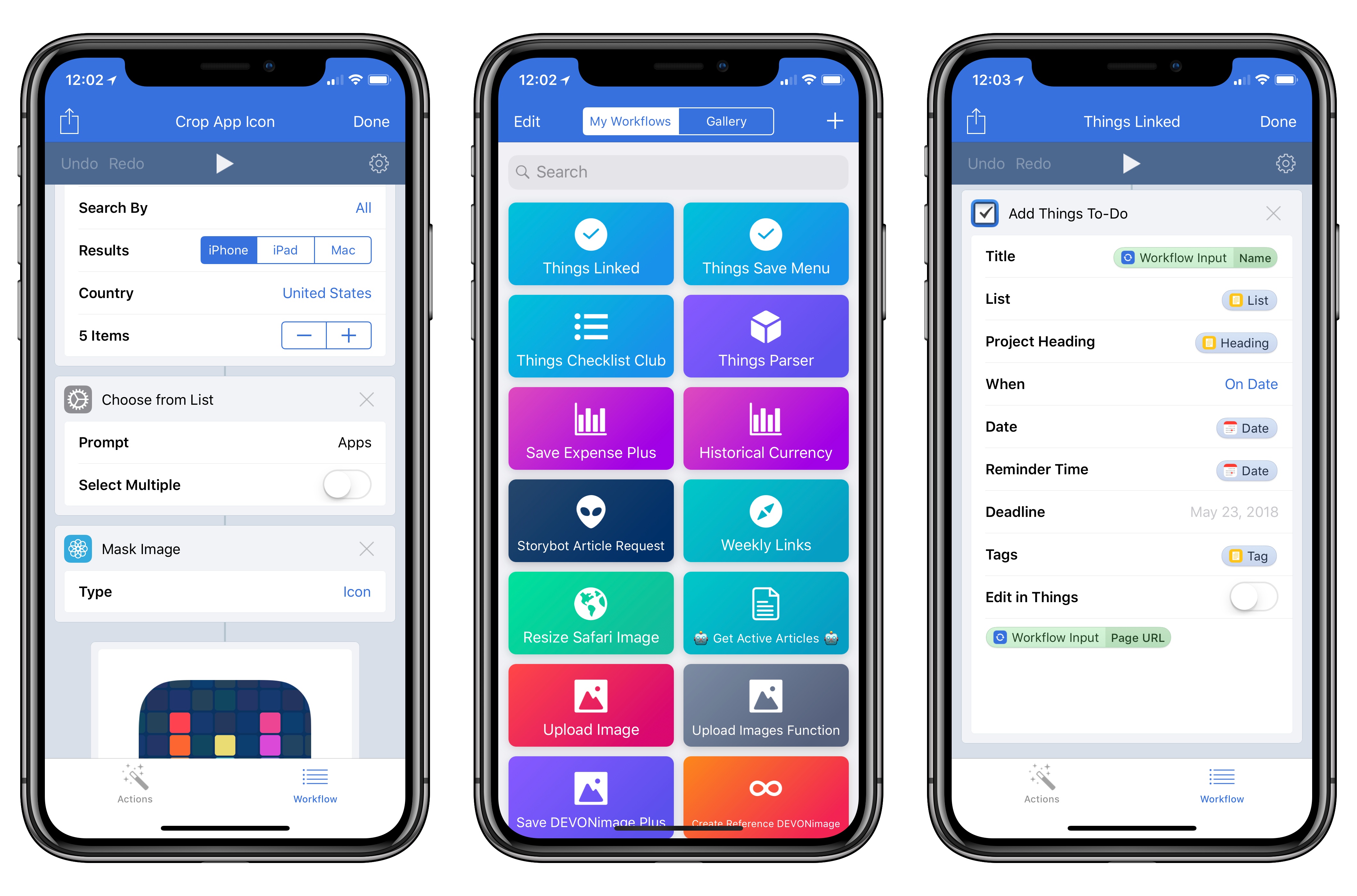 In the first update since November 2017, Apple today released version 1.7.8 of Workflow, the powerful iOS automation app they acquired last year. The latest version, which is now available on the App Store, introduces a brand new Mask Image action, adds support for Things’ automation features, and improves the ability to extract text from PDFs using the company’s PDFKit framework, launched in iOS 11. While the unassuming version number may suggest a relatively minor update, Workflow 1.7.8 actually comes with a variety of noteworthy changes for heavy users of the app.

First up is the ability to open specific workflows without running them. While Workflow previously supported URL schemes to either open the app or run an existing workflow, it didn’t support opening an individual workflow without starting it. In Workflow 1.7.8, you can now use the workflow://open-workflow?name=WorkflowName URL scheme to create launchers that open existing workflows in the app.

These new URLs are ideal for apps such as Launcher or Launch Center Pro, and I recommend them to create shortcuts for workflows you’re frequently editing, or which you want to run only after dropping content into the workflow editor (a feature that was added in version 1.7.7). Speaking of drag and drop: if you’re dragging an item and want to use it as input for a workflow, you no longer need to wait for the workflow to spring-load after hovering over it in the main My Workflows view. Just pick up a file and drop it over a workflow to run it – it’s faster and feels nicer than the old implementation.

The new Mask Image action is a feature Workflow users have been requesting for several years now; thankfully, Apple’s implementation doesn’t disappoint, and is poised to dramatically simplify image editing workflows that relied on tedious workarounds to mask images. Workflow’s native Mask Image action applies a mask to an image passed as input, cutting it into any shape you want. By default, the action offers three built-in presets: rounded rectangle (with a customizable Corner Radius value), ellipse, and icon.

In addition, you can also provide your own custom alpha mask through an image variable: in my early tests with this feature, I had fun using random images from my photo library as masks and understanding how Workflow treated their brightness as a custom alpha mask. According to the app’s documentation, darker colors in the alpha mask become transparent and lighter colors remain opaque; the mask is also resized to match the dimensions of the source image if necessary. 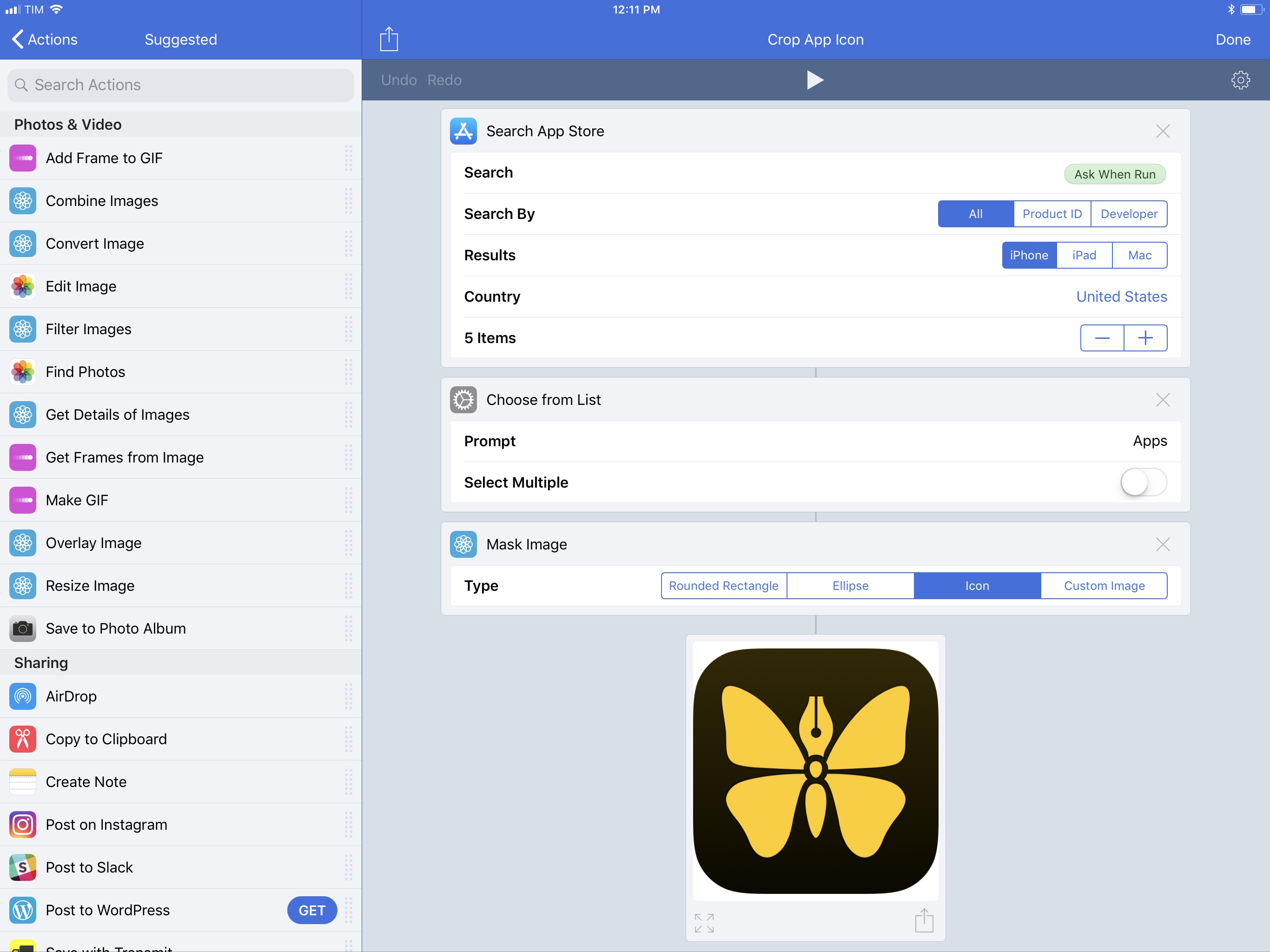 For the past couple of years, here at MacStories we’ve used our own workflows to mask images in the shape of iOS app icons or rounded profile pictures to be used for interviewees in our newsletters. These workflows required us to make our own squircle alpha masks from scratch and use a handful of actions and calculations with the Overlay Image action to fake the ability to mask an image because Workflow didn’t officially support it. We can throw all those workflows away with the new Mask Image action. Turning square artwork returned by the iTunes API (also natively supported in Workflow) into an app icon shape is now as easy as using Mask Image: Icon – that’s it.

Here’s a three-action workflow I made to search the App Store, pick a result (from a rich list), and generate an iOS icon for the selected app. No more third-party mask images, no more Overlay Image coordinates to be used. You can now create similar workflows for cropping a profile picture to a circle or putting iOS screenshots into device frames. I’ve been waiting for this action, and I’m happy with Apple’s solution.

In a surprise move, Workflow 1.7.8 extends its existing Things integration by supporting the more powerful automation features Cultured Code recently brought to its task manager. The Add Things To-Do action has been updated in this release with new fields based on Things 3.4’s URL scheme: you can assign a task to a project or area, specify a heading, enter dates, reminders, and deadlines, and even specify notes and tags. When saving a task in Things, you can choose to show the task editor in Things and manually confirm the new item, or immediately return to Workflow, receiving the task’s ID as input text.

The new Things action in Workflow 1.7.8.

There’s a common thread between the Mask Image and Add Things To-Do actions: both obviate the need for complex workarounds – whether they involve image overlays or URL schemes – because they’re based on visual automation and magic variables. The complexity of the underlying automation is completely abstracted as the user shouldn’t have to worry about the details of what goes on under the hood. Both actions make automation more intuitive and accessible, which is exactly what Workflow always set out to achieve.

To give you a practical example, here’s what my Things action looked like before today’s update, and how Apple made it obsolete with an enhanced built-in action that exposes no URL scheme and doesn’t require any date formatting: 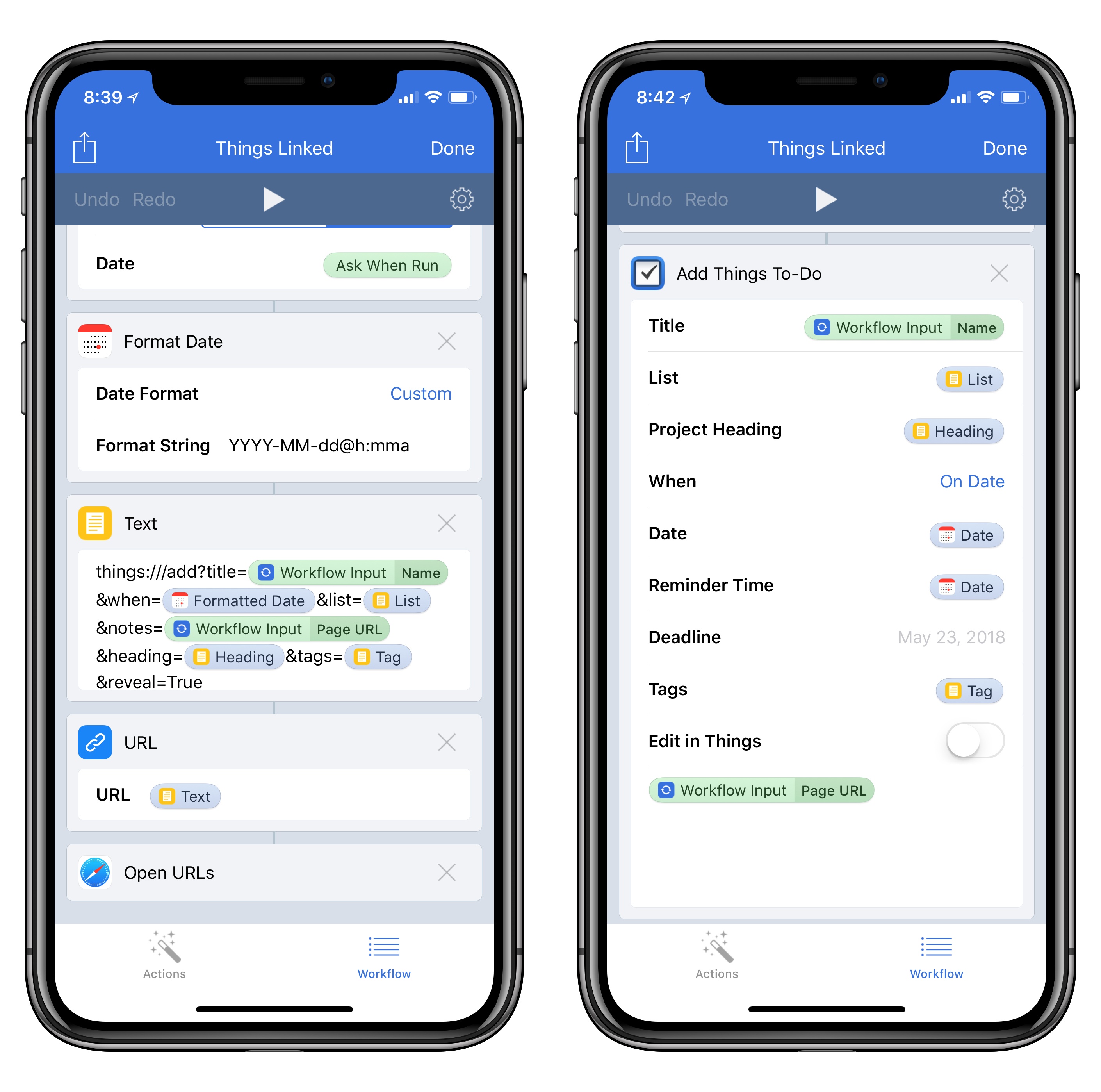 The same Things action, before and after Workflow 1.7.8.

Thanks to native Things support, I’ve already updated my Things Linked workflow (previously detailed here), and I plan to update other workflows previously shared with Club MacStories members as well.

There are a couple of features missing from Apple’s Things action I should point out: the reveal option to show a newly created task in Things doesn’t seem to be supported yet, and I couldn’t find an option to specify checklist items within the task either. The action also doesn’t integrate with Things’ more advanced JSON capabilities, but that’s to be expected given the developer nature of the functionality. Overall, I’m thrilled to see Apple rolling out initial support for Things automation in Workflow as I didn’t imagine it would happen so soon.

Lastly, besides dozens of welcome fixes and smaller enhancements (such as the ability to reorder items in dictionaries – finally), Workflow 1.7.8 features a substantially improved PDF-to-text coercion engine, built on top of the PDFKit APIs for iOS 11. In my initial tests with the update, Workflow appears to be extremely accurate in extracting text from PDFs now, correctly preserving line breaks and special characters, and going as far as splitting PDF pages as individual text items in the output – features all made possible by Apple’s PDFKit.

Perhaps even more impressively, the performance of Workflow’s PDF-to-text conversion is astounding: Apple’s iOS Security Guide, a 78-page PDF document, is converted to plain text in 1 second by Workflow on a 2017 iPad Pro. I’m going to have fun thinking of how Workflow can now fit in my paperless workflows and DEVONthink usage. In the meantime, here’s a workflow I made to pick a PDF with an iOS 11 file picker (which supports both iCloud Drive and third-party locations), extract its text, and merge multiple pages into a single plain text block. 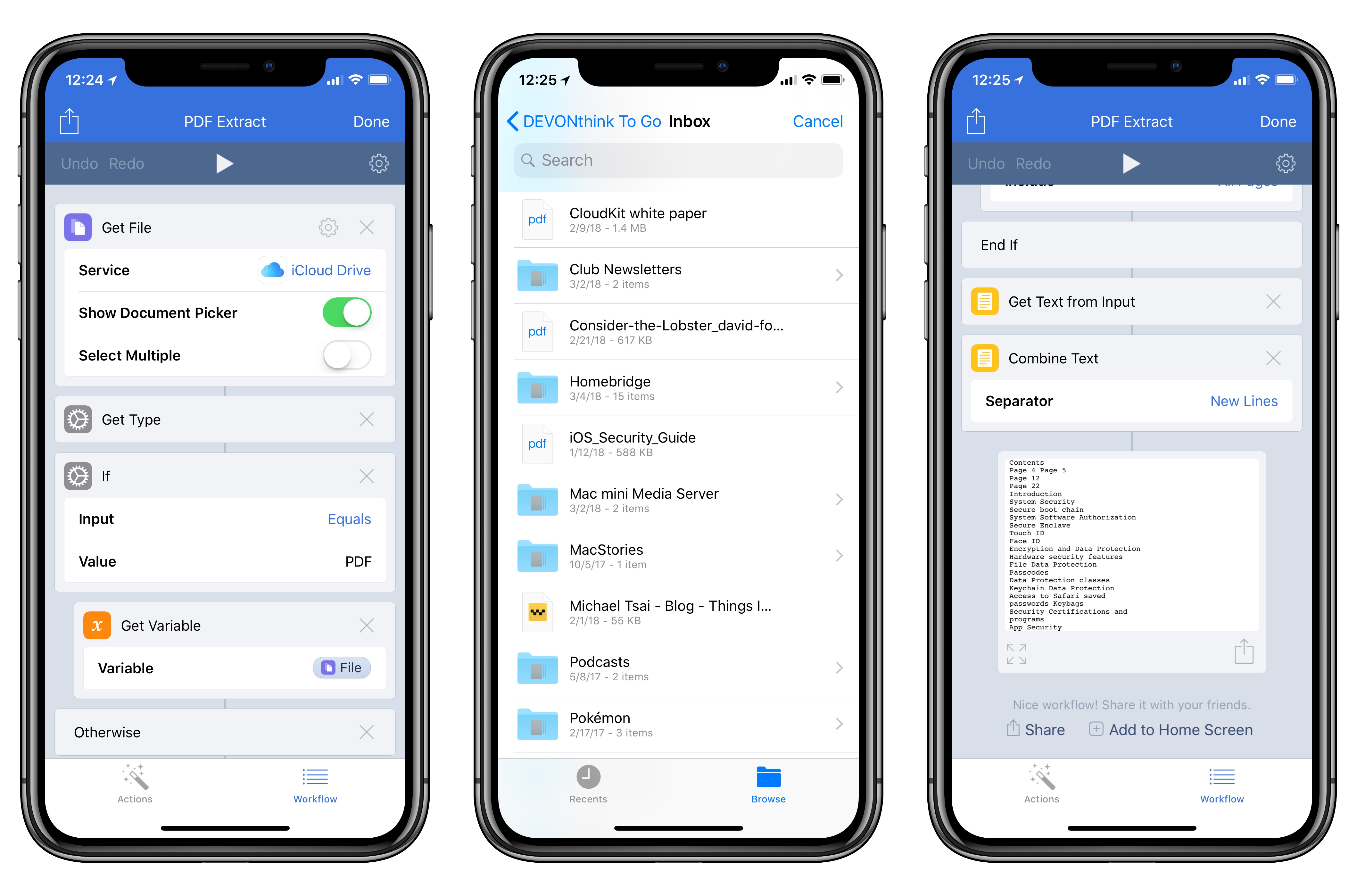 As I wrote when Workflow 1.7.7 was released four months ago, I appreciate the fact that, despite an unclear big picture, Apple is still listening to the Workflow community and updating the app with fixes and important new features, such as today’s Mask Image and Things actions. The company clearly knows that thousands of users depend on Workflow to make their iOS devices more efficient and productive; as we near the first anniversary of the acquisition with no updates on a possible Workflow 2.0, it’s good to see that Apple is still putting in the effort to keep the app alive with new functionalities and native iOS integrations.

I plan to cover the changes in Workflow 1.7.8 over the next few weeks in our dedicated Workflow hub and my iPad Diaries column, as well as Club MacStories. In the meantime, you can download Workflow 1.7.8 from the App Store and read the release notes here.