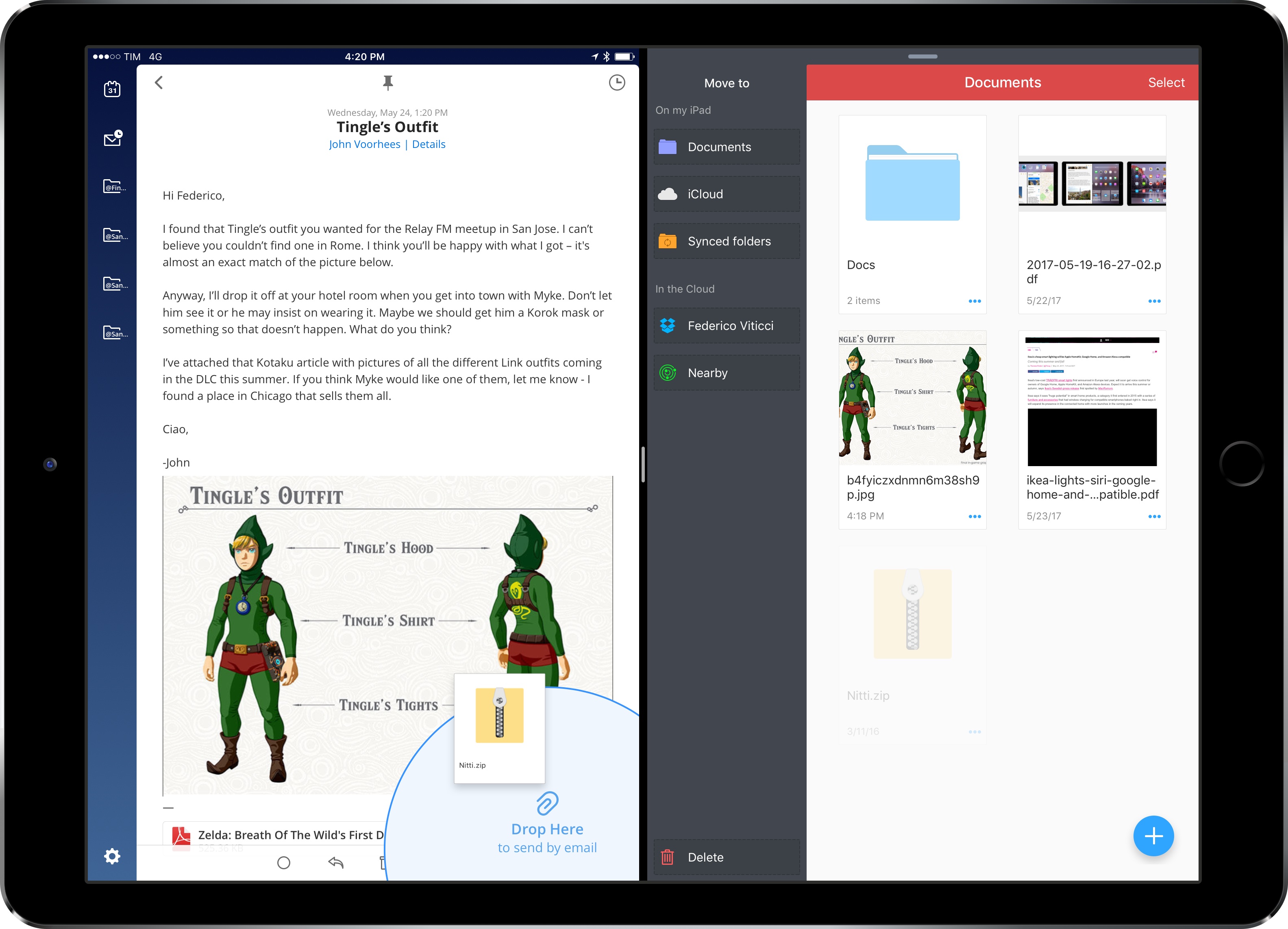 In my iOS 11 wish list for iPad and concept video, I focused on system-wide drag & drop – a feature that could reshape how iPad users move documents and data between apps. Readdle, makers of the popular Spark and PDF Expert, aren’t waiting for Apple to add a native drag & drop framework to iOS, though. Today, in addition to the release of Documents 6, the company is updating most of their iPad apps with a custom drag & drop feature that simplifies the transfer of documents between two apps in Split View. I’ve been testing this functionality for the past week, and, even if it’s not system-wide iOS drag & drop, it’s been enough to pull me back into Spark and PDF Expert – at least for now.

Since the launch of iOS 9, I’ve seen a few third-party libraries attempt to bring drag & drop to iPad apps, but all of them failed to gain widespread adoption. As I outlined in last week’s story, a native drag & drop feature would have to be an official framework created by Apple and opened up to third-party developers with an API.

With their iPad apps, Readdle is taking a limited, but perhaps more effective approach: drag & drop works for certain file types and specific drop targets in the UI, and it’s only supported in Split View and with Spark, Documents, PDF Expert, and Scanner Pro. Don’t expect to, say, drop an image from Safari into Spark, or a PDF from Slack into PDF Expert. Readdle has built their own proprietary flavor of drag & drop that only works with their apps in Split View.

Dropping files from Documents into Spark.Replay

Despite its custom nature, drag & drop works as advertised and it’s a fantastic complement to Readdle’s iPad apps that reinforces how needed an official Apple version is. Readdle’s drag & drop feels natural: if you need to add multiple attachments to an email in Spark, you can grab them in Documents and drop them into the body of the message. Want to save a PDF from Spark into PDF Expert? Just hold it, drag it into the app in Split View, and the file is saved. No need to open and close the iOS document picker multiple times, no need to upload anything: with drag & drop, you can save several steps typically involved with managing documents in a way that makes sense on the iPad’s large screen.

Readdle has been able to pull this off by adopting constraints in terms of the kind of content that can be grabbed and where in the interface it can be dropped. All of their apps offer drop areas clearly visualized in the UI: in Spark, the ‘+’ button in the bottom right corner transforms into a larger blue circle when you’re holding a document, indicating that you can drop the file there to create a new message with an attachment. 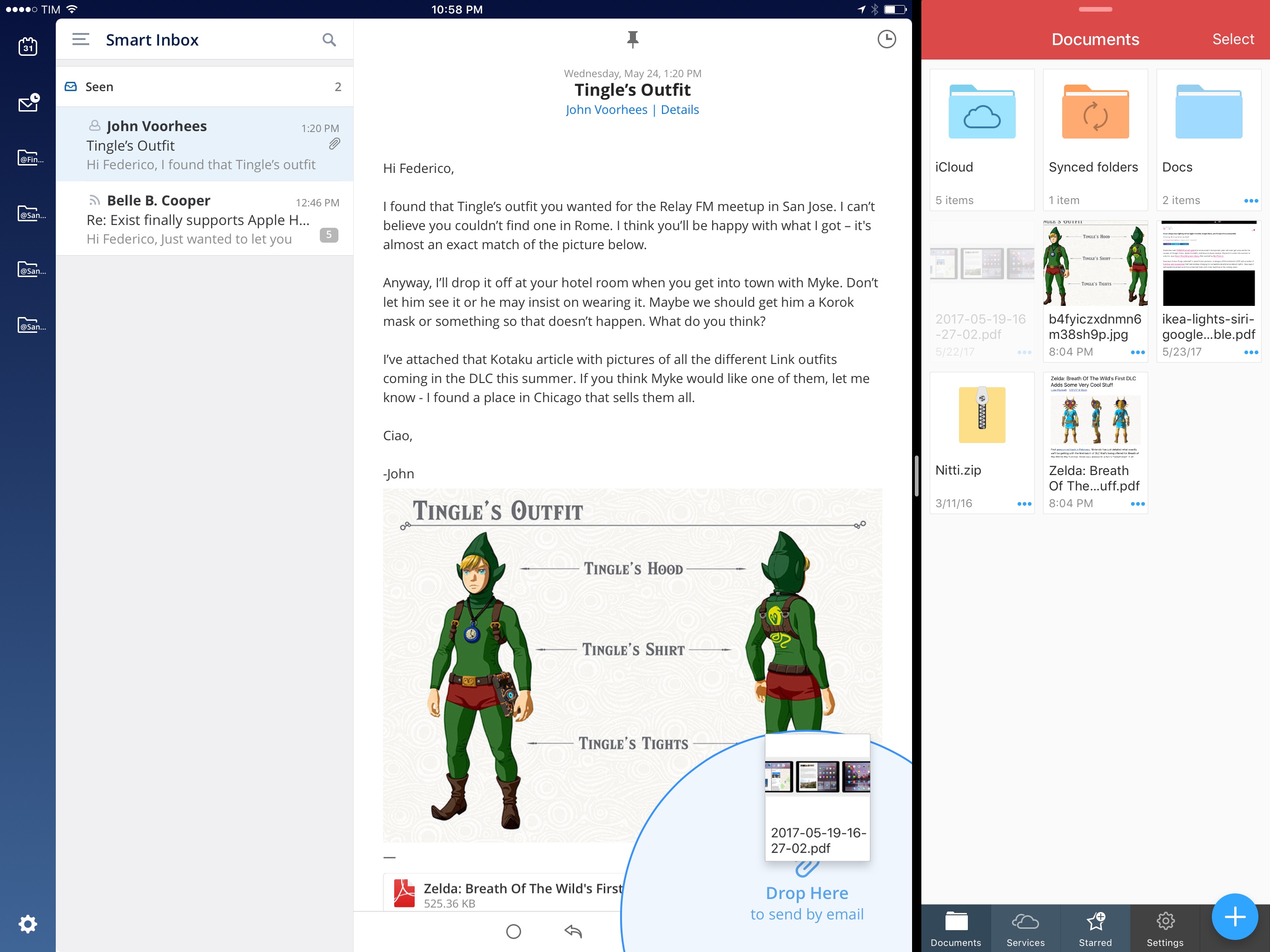 If you’re already writing a message and you start dragging a file, you’ll get a drop target at the bottom of the message composer instead, which allows you to attach multiple files to the same email (something that is either cumbersome or impossible in other email clients for iPad). 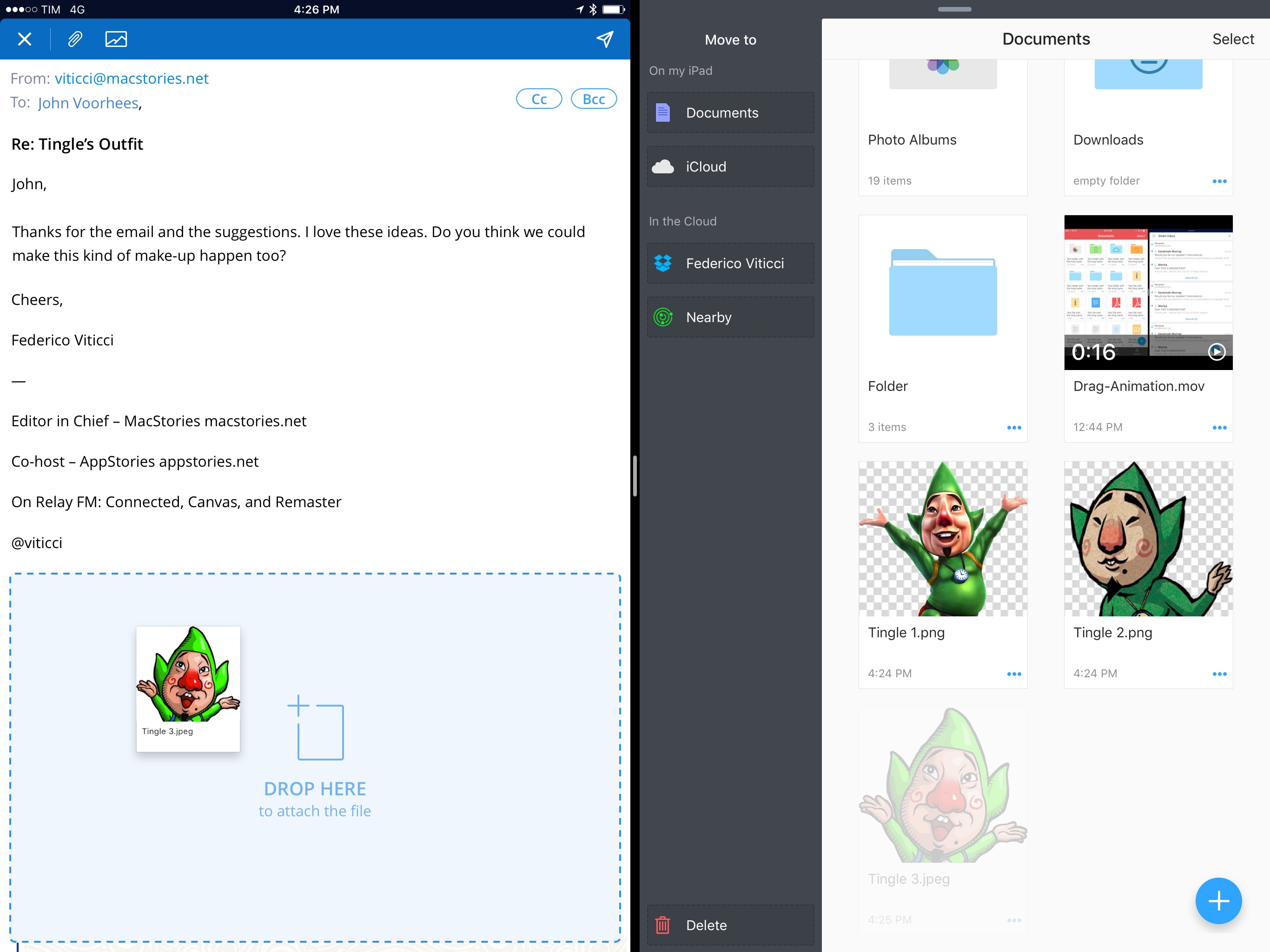 I recently had to send a handful of PDFs to my accountant and, for the first time in years, I didn’t have to collect them in a single .zip archive beforehand; I just put PDF Expert and Spark in Split View and dropped multiple files in the email, which took less than 10 seconds. It was glorious in its obviousness.

Readdle’s drag & drop is even more impressive when you want to save attachments from Spark into PDF Expert or Documents. Not only can you grab an email attachment and drop it in the main UI of the other app – you can release it on top of an existing folder to save it in that location, or you can drop it on another file to create a folder.

There’s even support for spring-loading: while holding a file, you can hover over a location in PDF Expert’s sidebar (such as iCloud or Synced Folders) and wait a second until the destination loads and lets you continue navigation before dropping the file. To navigate back to the root level, you can either spring-load another item in the sidebar or hold the file on top of the ‘Back’ button in the upper left corner.

As you can imagine, I’m a fan of what Readdle has built; it matches the kind of drag & drop system I envisioned for iOS 11, and it fully supports multitouch in that grabbing an item from one app preserves the ability to control the interface in the other. There are other behaviors I would have liked to see and which are not supported right now (dragging a message from Spark to print an email to PDF; dropping a text selection in another app), but, overall, Readdle has replicated (albeit at a smaller scale) the experience we should have in all iPad apps in the future.

Readdle has been quite clever from a technical standpoint, too. Under the hood, two apps in Split View create a local web server that makes them aware of each other. This two-way communication allows them to share documents by simulating drag & drop in the UI and relying on various URL scheme and clipboard-based workarounds. Readdle did an admirable job in making their drag & drop feel like part of iOS, but, if you look closer, the fact that a file can’t float on top of the Split View divider (it just transitions from app to app at the edges of the UI) may break the illusion. For most people using Spark and PDF Expert in Split View, though, the apps’ drag & drop feature will look like a native iOS enhancement. 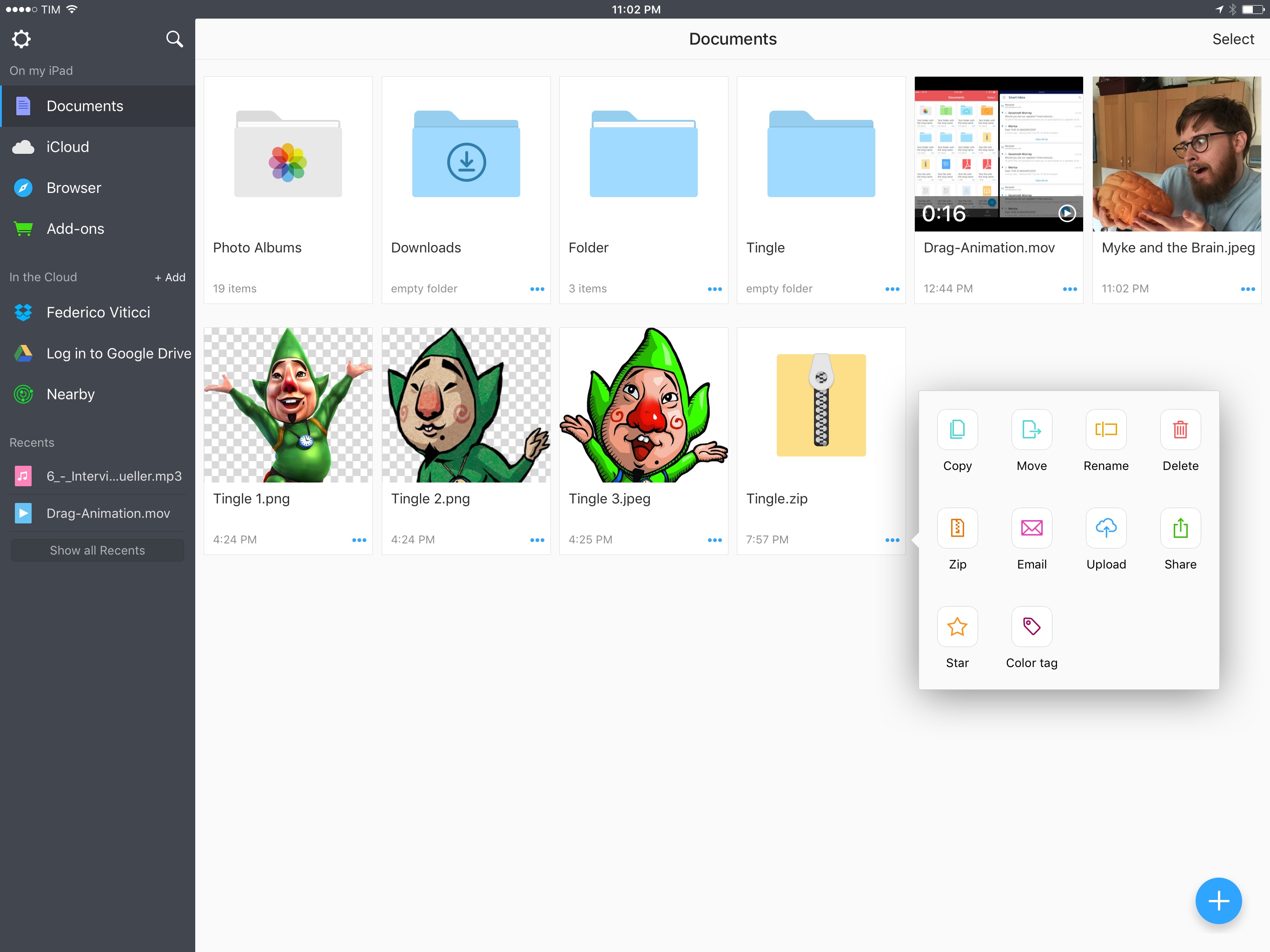 In addition to bringing drag & drop to their iPad apps, Readdle is also releasing version 6.0 of their popular Documents file manager later today (a free update for existing users). I’ve been using Documents as a de-facto lightweight Finder on iOS for years now, and it’s good to see that Readdle is continuing to develop the app as a central hub that can integrate with iCloud Drive and other services.

Documents 6 iterates upon the app’s solid foundation without altering its core structure or functionality. The new version supports drag & drop with Readdle apps, which, like in PDF Expert, lets you drop files into other apps in Split View as well as receive files from apps and save them in specific locations.

Readdle has also adopted a contextual menu for individual files that can be opened by pressing a three-dot ‘More’ button. The combination of long-press for drag & drop and the contextual menu works well, and it simplifies access to options that were perhaps too hidden in the old version of the app.1

Documents 6 brings a redesigned media player for audio files, too. The ‘Now Playing’ screen now lives in a sidebar on the iPad, with a list of audio files queued up on the right; the player can be minimized if you want to continue listening while doing something else in the app. I’ve been using Documents to preview AppStories episodes before release, so I appreciate the more flexible audio player (which also resizes properly in Split View now).

There are other minor changes in Documents 6 but, as you might expect, drag & drop is the marquee addition. Being able to keep a Finder-like app in Split View when processing email or scanning PDFs and having a way to easily move documents back and forth across apps is the kind of workflow every iPad user deserves.

The convenience of drag & drop in Readdle’s apps is predicated on the assumption that most of your work happens inside the Readdle ecosystem. And given the popularity of Readdle’s iPad apps, there’s a good chance that you’re already using Spark and PDF Expert to communicate with others, edit PDFs, and exchange documents. But even if you’re not a Readdle user, I believe this new drag & drop feature can lure you back into their suite of apps and convince you to stay until Apple offers a native, system-wide alternative on iOS.

Out of curiosity (and to properly assess the utility of drag & drop), I switched to Spark, Documents, and PDF Expert full-time for the past week. To my surprise, I noticed that I spend a lot of time dealing with attachments, converting documents to PDF, and saving those PDFs to Dropbox. Drag & drop between these apps has saved me several minutes I would have otherwise wasted dealing with extensions and document providers.

As I argued last week, it just makes more sense on the iPad to grab something and drop it elsewhere on screen. The folks at Readdle understand that inter-app communication on iPad can go beyond the share sheet, and they’ve shipped a polished, intuitive drag & drop functionality that now makes other iPad apps feel one-dimensional and static.

Readdle’s take on drag & drop is the strongest case in favor of an official, Apple-made alternative yet. I just hope that this custom implementation will feel obsolete in two weeks.