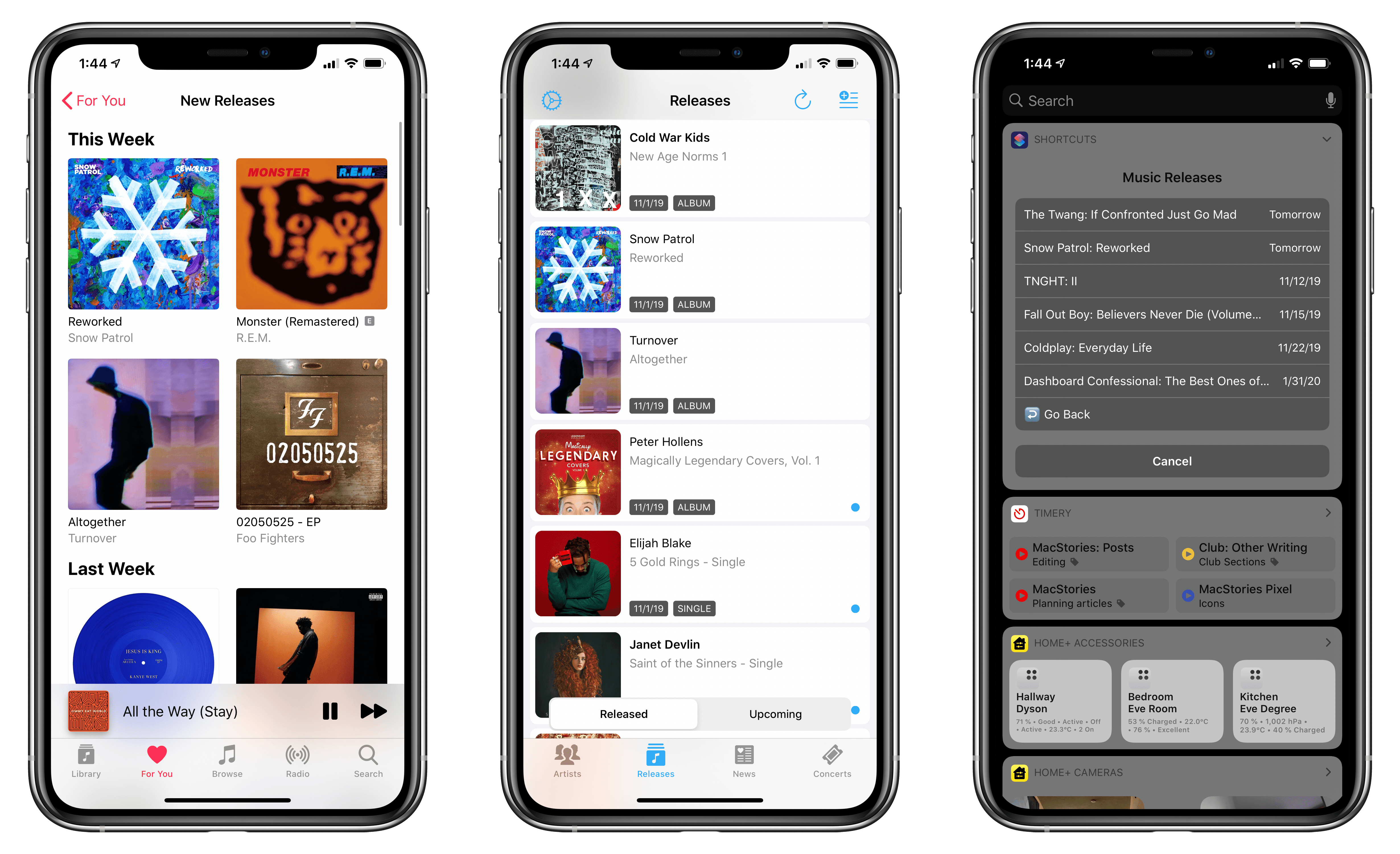 I was reading Jason Tate’s (as always, excellent) Liner Notes column at Chorus over the weekend, and his comments on Apple Music’s approach to highlighting new releases resonated with me:

Every Friday I open up the Music app, go to the For You section, scroll all the way down to the bottom and look at the “New Releases” section. This section looks at your library and shows you new albums from the artists you have in your collection. It’s a quick way to see if I’ve missed anything big that I need to post about or want to listen to, as I prepare for this newsletter. There are a few things about this section that drive me nuts: it’s very hidden and hard to get to, it’s laid out weirdly and often misses artists I have in my collection, and it doesn’t have any way to show me singles from artists I like that were released or songs that are on upcoming albums from artists I like that were released over the past week. This entire section could be designed so much better and be so informative. They have all of the information needed to put together an incredibly useful page of new music that I’ve already signaled I’d like to know about, but don’t. The weekly New Music Playlists are nice, and often do include some things I want to know about, but they also are usually full of stuff I’ve already heard and have played multiple times. This missing feature is the single most frustrating part of Apple Music for me.

As much as I like using Apple Music (especially now that it offers time-synced lyrics), I’ve always been disappointed by its treatment of new music releases. I agree with every single issue mentioned by Tate: the ‘New Releases’ section is tucked at the very end of the For You page and laid out as a horizontal carousel that requires a lot of swiping; you can view the ‘New Releases’ page as a grid, which has sections for different weeks, but, in my experience, it only aggregates highlights for new releases from some of my favorite artists. The ‘New Music Mix’ playlist is not terrible, but it often comes loaded with stale data – songs I’ve already listened to multiple times and which shouldn’t qualify as “new” weeks after their original release date. Furthermore, I’ve found notifications for new releases for artists in my library unreliable at best: I occasionally get notifications for new albums, but never for new singles or EPs.

For people who want to stay on top of every new music release from their favorite artists, the tools available in Apple Music alone aren’t enough. And I understand why Apple doesn’t want to invest in this aspect of the service: not everyone runs a music-focused publication or needs to know about every single release for hundreds of artists every week. Since the unfortunate demise of Record Bird – the app that encapsulated my ideal new music release discovery tool – I’ve been building a new system to stay on top of music releases, and I’d like to explain how.

The primary (and most important) tool in this music discovery system is MusicHarbor. The app, created by indie developer Marcos Antonio Tanaka, was one of several utilities that launched in the wake of Record Bird’s shutdown; unlike similar apps, MusicHarbor has been steadily improved with new features, design enhancements, and premium options that now make it a fantastic companion to Apple Music if you care about seeing every new release for every artist in your library.

Following an initial setup process that lets you import artists from your music library (the app can also import artists from an iCloud backup, but it does not support Spotify), MusicHarbor lets you see a reverse-chronological feed of new music releases in the main ‘Releases’ tab. This single screen is what sets MusicHarbor apart from anything else I’ve tried to date thanks to its combination of system integrations, iOS 13 features, and power-user options. 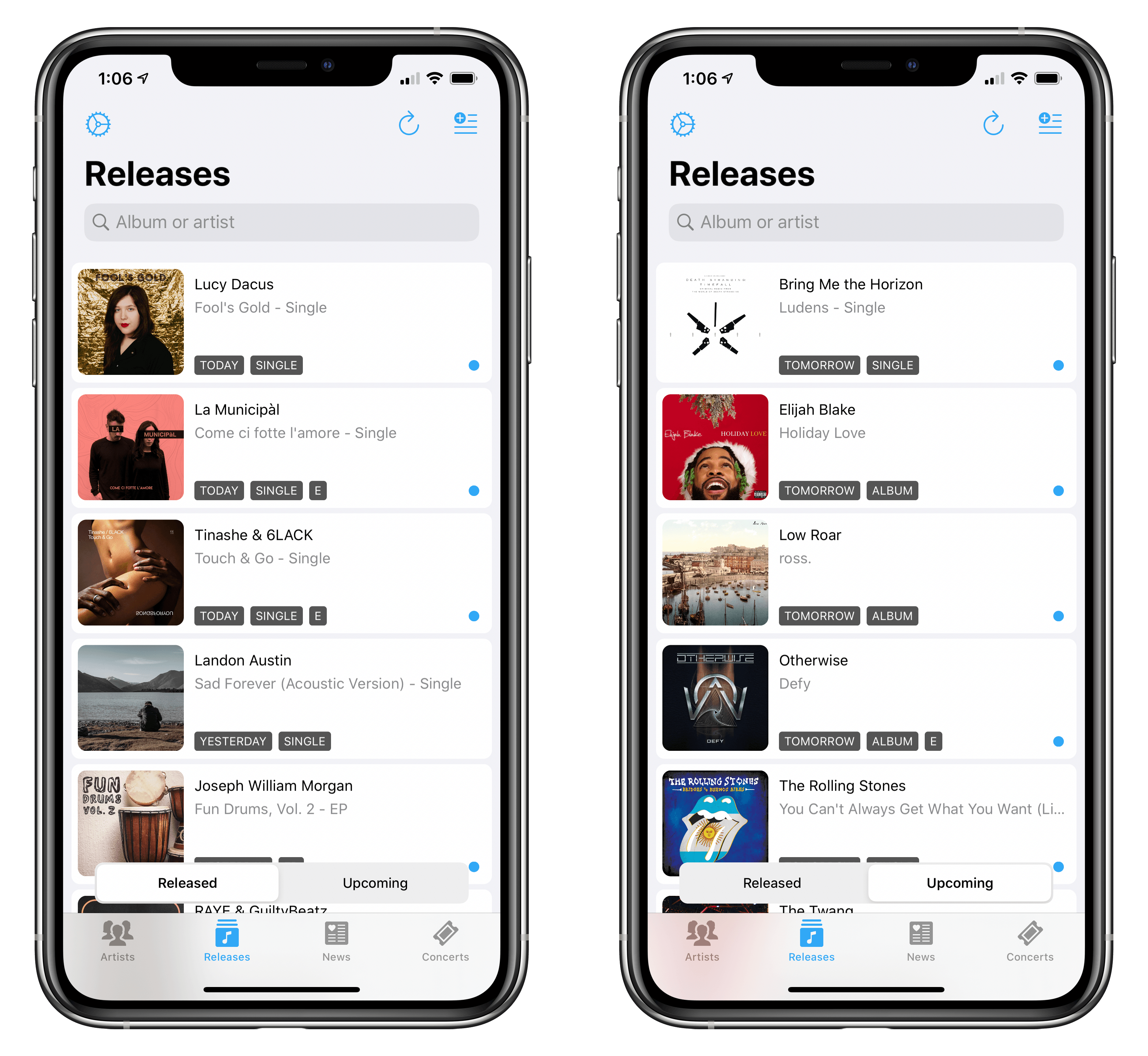 First, a segmented control at the bottom of the screen allows you to switch between released music and upcoming releases. When new music comes out every Friday morning, I open MusicHarbor’s Releases page and, following a quick data refresh, I see dozens of new items waiting for me. Each item is labeled with its release type (album, single, EP, or remix) and can be expanded to reveal a preview screen with buttons to listen on Apple Music (the Music app will open) or add the item to one of your playlists, which you can pick from MusicHarbor without leaving the app. 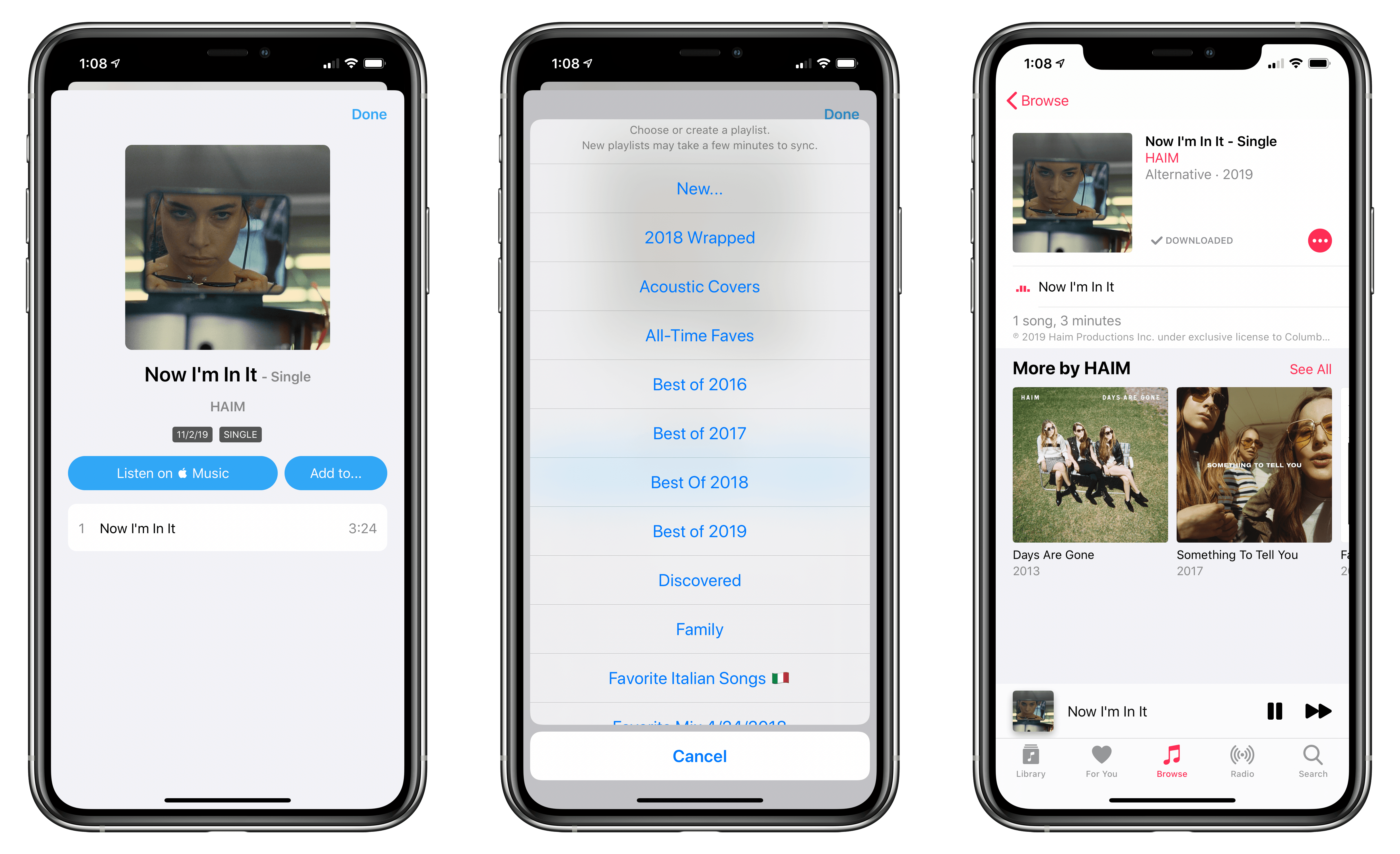 MusicHarbor can open new releases directly in the Music app without going through Safari first.

In my experience, MusicHarbor never failed to surface a new release for an artist already in my library, proving itself considerably more reliable than anything Apple has ever done in the New Releases section of the Music app. But there’s so much more that MusicHarbor gets right in terms of giving you control over how you want to see new music releases and what you want to do with them. As part of the app’s ‘Unlock Everything’ one-time, $5.99 In-App Purchase (MusicHarbor is a free download), you get the ability to filter releases by type and change the display mode of the Releases page. In my case, I’ve hidden remixes (since I don’t usually care about them), switched to compact mode, and opted to see the artist’s name before the new music release’s title. The variety of customization options is well suited for a utility designed for power users, providing a degree of personalization that I’m fairly certain Apple – which has to design software for the masses – will never consider. 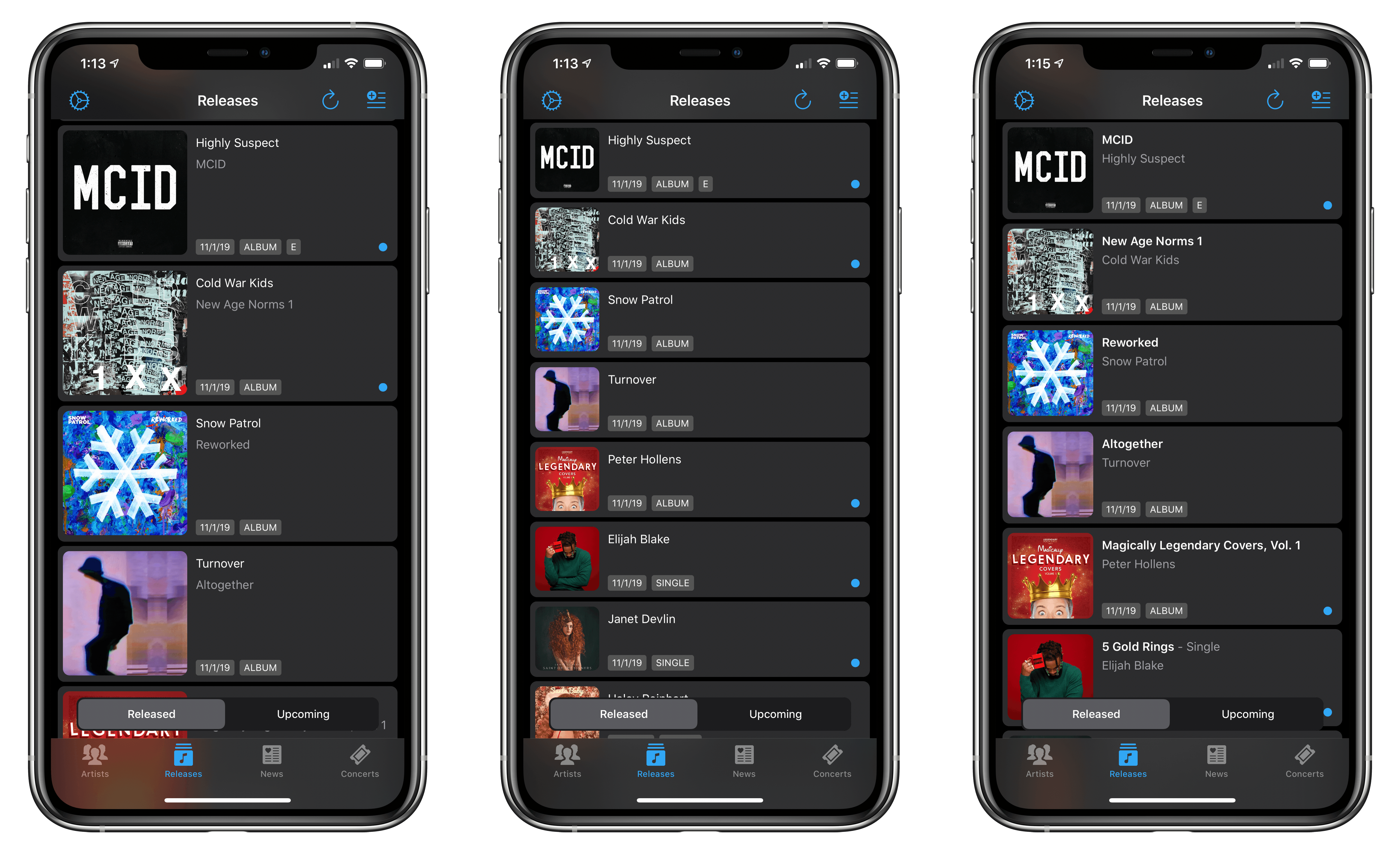 MusicHarbor is also a great iOS 13 app: the system’s dark mode is natively supported by the app, which implements SF Symbols throughout its UI and makes excellent use of context menus. MusicHarbor’s long-press menus are some of the most useful I’ve seen in an iPhone app to date thanks to the sheer amount of functionality they pack: you can long-press an item to show it in Apple Music, add it to a playlist, view the artist’s profile page inside MusicHarbor, share it, or add the item’s release date to your calendar. 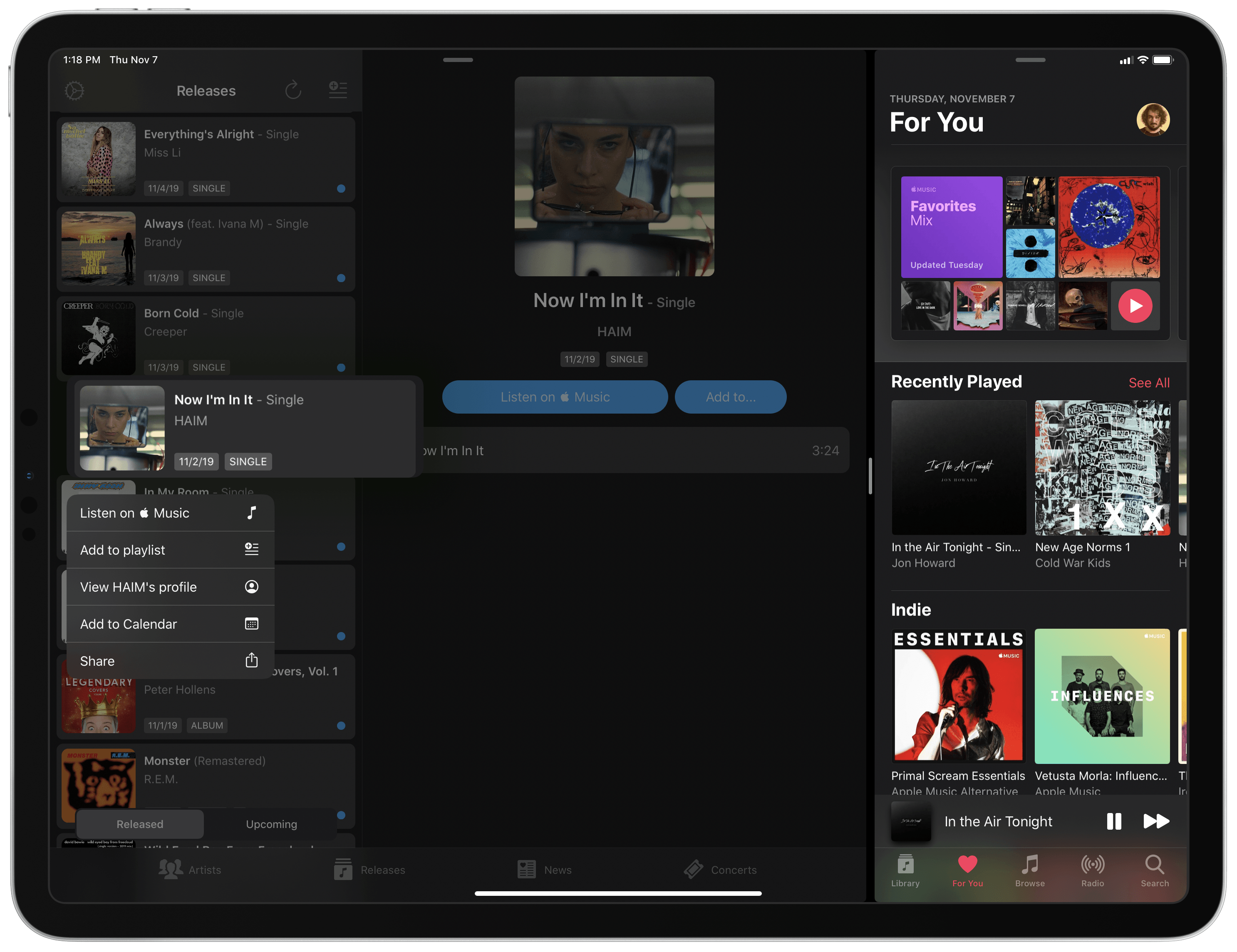 Calendar integration is another reason why MusicHarbor fits perfectly with my approach to managing and staying on top of new music releases. For the past couple years, I’ve been keeping a ‘Music Releases’ calendar in iCloud where I create all-day events for upcoming releases from my favorite artists. The time-sensitive nature of new releases fits well with a calendar-based system, which I can check out via Apple’s Calendar app or, even better, its widget or Shortcuts integration. From MusicHarbor, all you need to do is tap ‘Add to Calendar’ and a native event creation UI will come up, allowing you to add a new event for the selected item. An Apple Music link is included by default in the event; unfortunately, MusicHarbor doesn’t let you select a default calendar for music releases – it uses the system’s default calendar, so if you don’t want to save your events there, you’ll have to pick a different calendar manually every time. It’s not a tragedy, but I wish I had the option of selecting a MusicHarbor-specific calendar in the app’s settings. 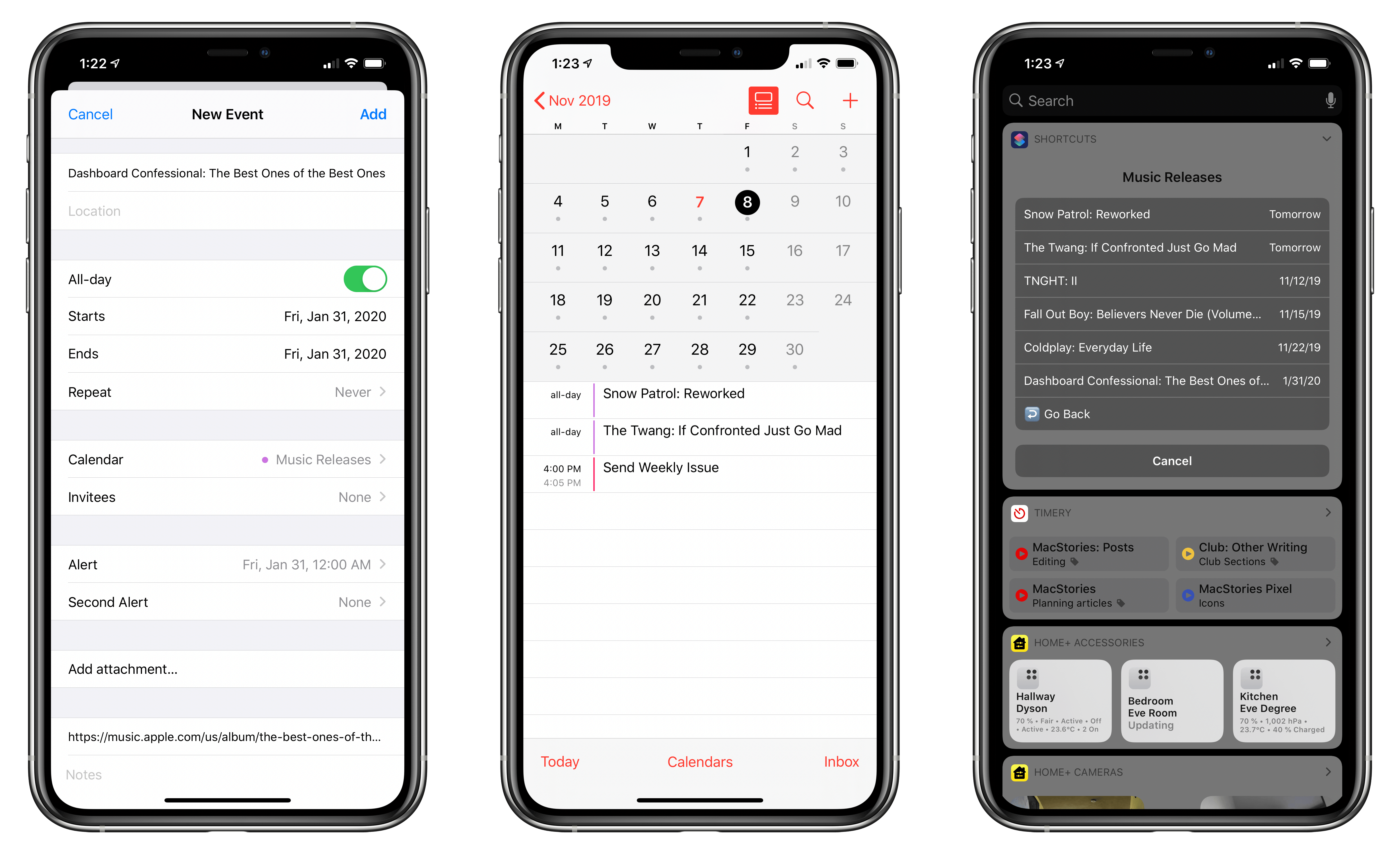 I can see upcoming music releases in the Calendar app as well as custom shortcuts that integrate with the system calendar.

By saving upcoming releases in an iCloud calendar, not only do I get the benefits of system integrations across devices, but the calendar can also be used as a data source for other apps. Case in point: with Countdowns (a countdown app available on every Apple device, including the Mac thanks to Mac Catalyst), I can create a new countdown timer and pre-fill its fields by importing it as a calendar event. It’s a manual process (I wish Countdowns had an “automatically import events from this calendar” feature), but I like how, with minimal effort, I can assemble a list of countdowns for upcoming releases that’s on my iPhone, iPad, Mac, and Apple Watch. 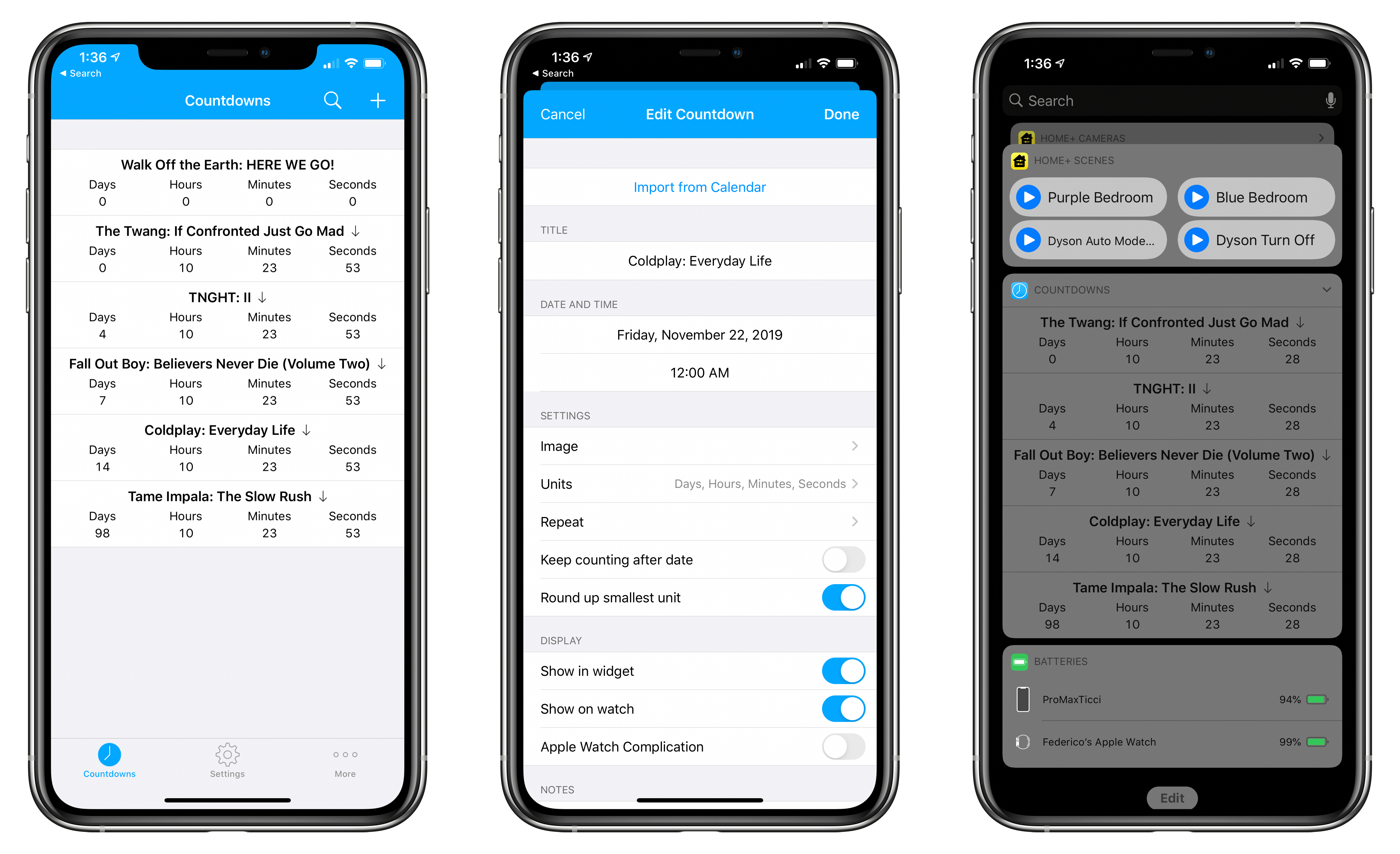 Lastly, I want to mention how music publications and friend recommendations still play an essential role in discovery of new music for me. Jason Tate’s aforementioned Chorus.fm (which used to be known as AbsolutePunk) is one of my weekly must-reads: I’m a proud supporter, and their Release Dates page is a great resource. Alternative Press, Stereogum, and Billboard are also good sources on new music releases if you’re looking for higher-volume feeds. I also enjoy Apple Music’s Friends section: it’s a good way to find out what kind of music people I follow have been into lately; I’ve often discovered some hidden gems thanks to its section in the Music app and dedicated Friends Mix playlist.

The combination of MusicHarbor and Apple Music has allowed me to set up a system that aggregates all kinds of new releases from all my favorite artists. As I noted above, I understand that not everyone needs this kind of control over new music releases, but it works well for me; I particularly appreciate the inclusion of Calendar integration in MusicHarbor, which has helped me stay on top of future releases in addition to songs and albums that have already come out.

For the past few months, I’ve also been working on an advanced Apple Music shortcut that, among other features, lets you create your own database of new music releases from Apple Music. This project started as a simpler series of actions for Apple Music, but it has evolved into a more powerful and versatile app-like experience that spans functionalities such as AirPlay media controls, smart mixes, search, album management, and much more. The shortcut, called MusicBot, has become the primary way I listen to music every day, and I’m excited to publish it on MacStories in the near future. 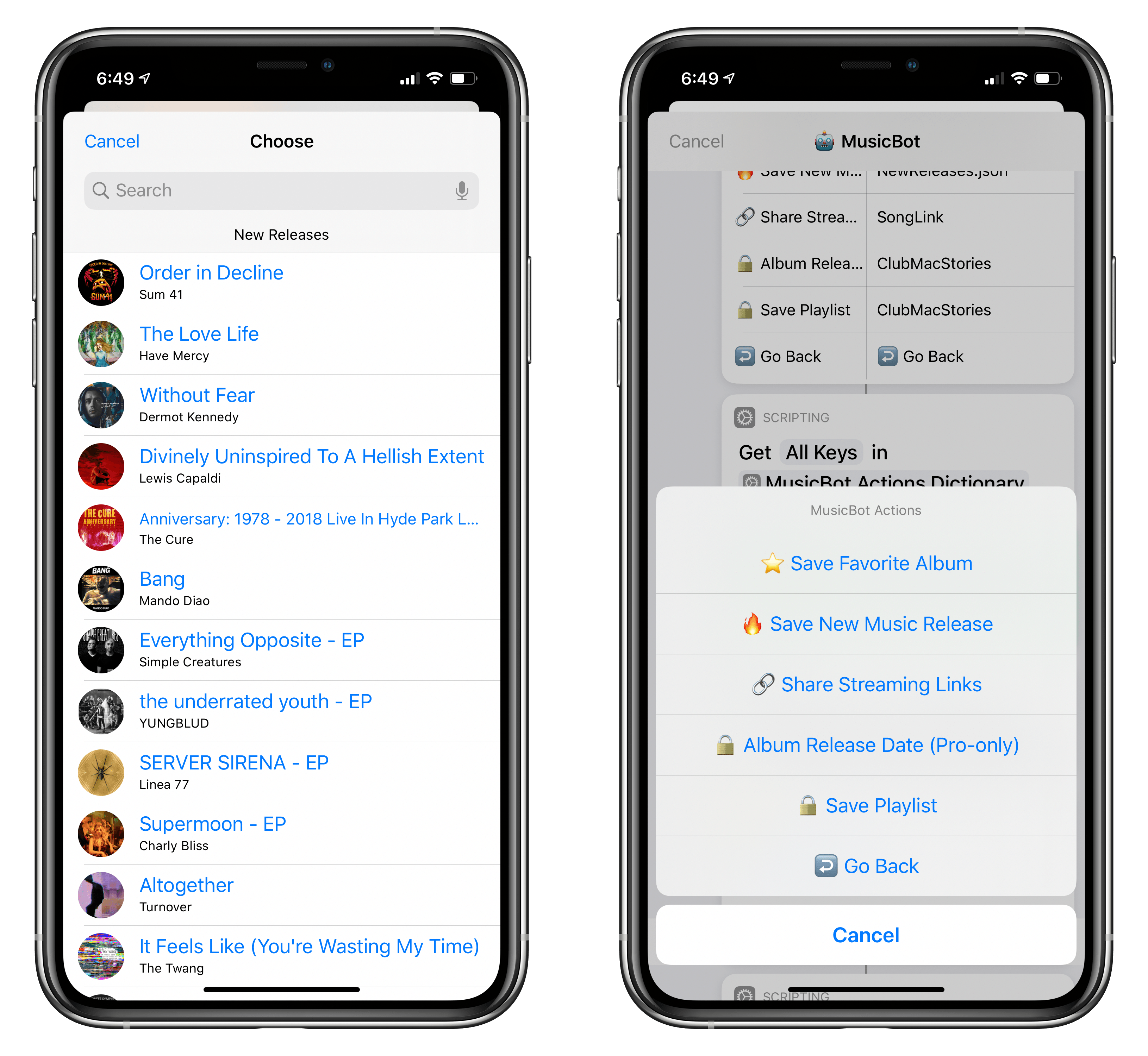 These days, all new music releases I’m interested in are discovered via the methods mentioned above and collected in MusicBot. I’m putting the finishing touches on the shortcut this week, and I look forward to explaining everything it’s capable of soon.