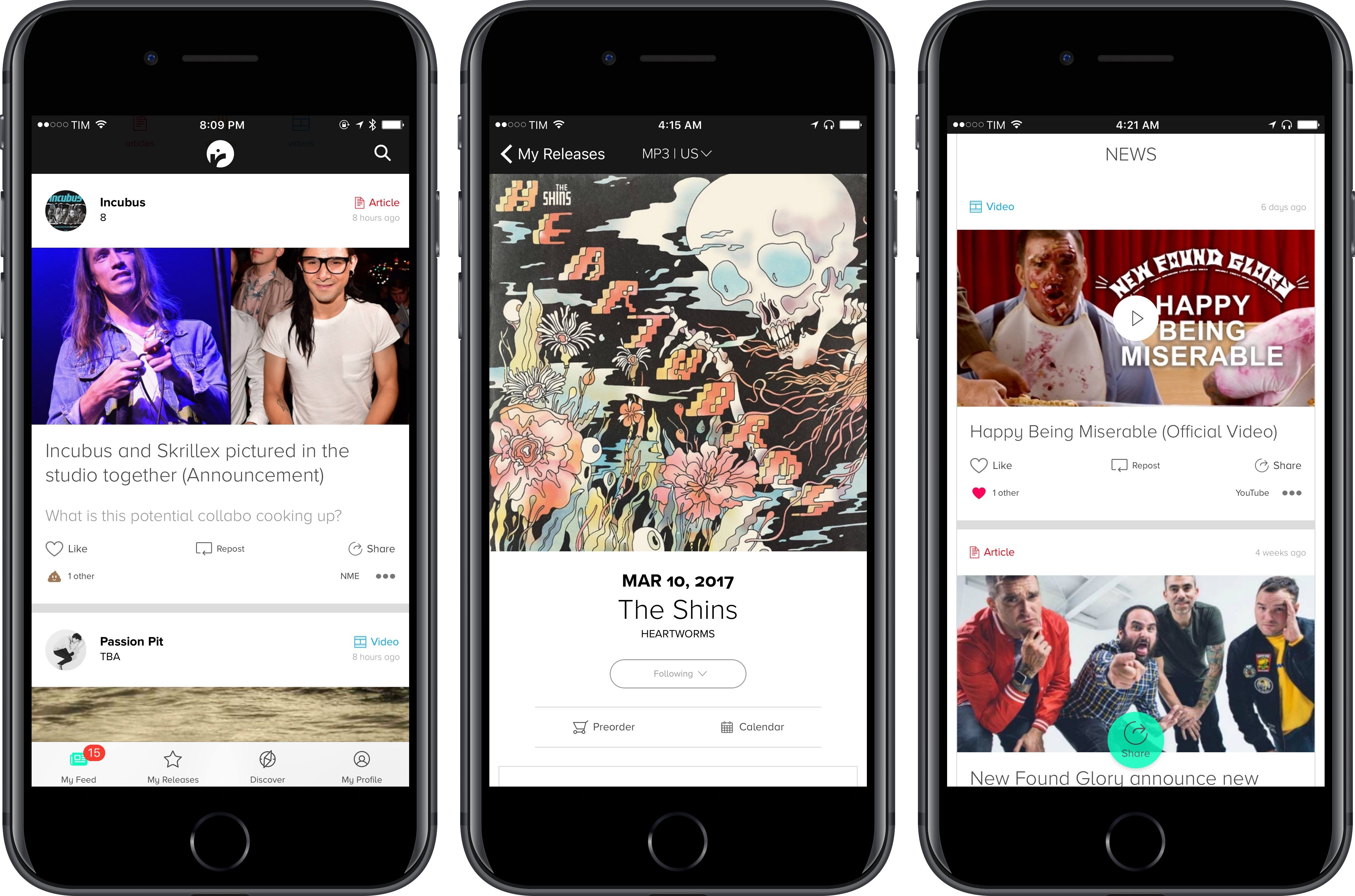 When it comes to keeping track of new music releases from my favorite artists, streaming services have always been a disappointment. After nearly eight years of streaming music every day, I’ve realized that the problem lies on the two ends of the New Releases spectrum: these days, services either prioritize front page curation skewed towards new pop, R&B/hip-hop, or EDM tracks (the most popular and lucrative genres), or they algorithmically suggest new releases for artists I may like, but which I’m not necessarily familiar with.

I’ve tried all of the major streaming services since 2009, and only two of them have gotten close to my ideal implementation of “Here’s everything artists you already know have released or are about to release”.

Rdio (forever in our hearts) had a solid New Releases section featuring a mix of variegate editorial picks culled from a variety of genres, labels, and trends. Unlike the modern equivalents in Spotify and Apple Music, I remember Rdio’s New Releases page1 offered a more balanced, heterogeneous mix of new songs.

Spotify, on the other hand, has invested heavily on algorithmic and serendipitous discovery of songs, but it still hasn’t quite figured out how to display every new release from every artist you care about. Spotify can send emails for new release highlights, but those are only a subset of new releases from your favorite artists – usually, only the most popular ones. Other Spotify features are similarly focused on highlights.

In comparing the treatment of new music releases among different services, I realized that this is largely what Apple had set out to solve with Connect in Apple Music: a way to follow all your favorite artists and view updates for their announcements – whether they were new songs, video clips, tour dates, or photos.

Apple Music Connect, however, has faltered due to Apple’s inability to scale a music-centric network (twice) and because it was predicated on a commitment from artists – both superstars and smaller acts – to post regular updates on their Connect feeds. After an initial spur of song previews and photos published on Connect, Apple Music’s network has mostly turned into a ghost town of sporadic updates, often automatically cross-posted to other networks (without any exclusivity), with hashtags that can’t be tapped and shortened links that open Safari webpages after multiple redirects. It’s not a good user experience. Apple Music Connect is an afterthought; it’s also been regarded as such by Apple itself with the removal of the dedicated page in iOS 10.

Fortunately, there are still people who understand what a music lover with a broad range of preferences wants from a tool designed to discover new music. For the past couple of months, I’ve been using Record Bird, a free iPhone app hailing from Austria, to check on updates from my favorite artists every day, stream songs, watch videos, and even read related stories.

Like other modern music apps, Record Bird assembles a list of your favorite artists by scanning what you’ve saved in your library. This is done with a native scan of your Apple Music library through iOS permissions, or by authenticating with your Spotify account in the settings. After performing an initial scan – a process similar to Songkick – you’ll see every artist the app has matched under your profile. I have 675 so far.

What sets Record Bird apart from any similar tool or streaming service I’ve tried is the My Feed page. Record Bird keeps a reverse chronological feed of every announcement from every artist you’ve saved in your library. Whenever a new single or album from an artist you follow comes out, Record Bird will show you the cover and buttons to buy it or stream it on Apple Music and Spotify.

The main feed in Record Bird.

The design of new releases in the feed is clean and you can tap on individual items and artists to navigate into dedicated pages for additional details. 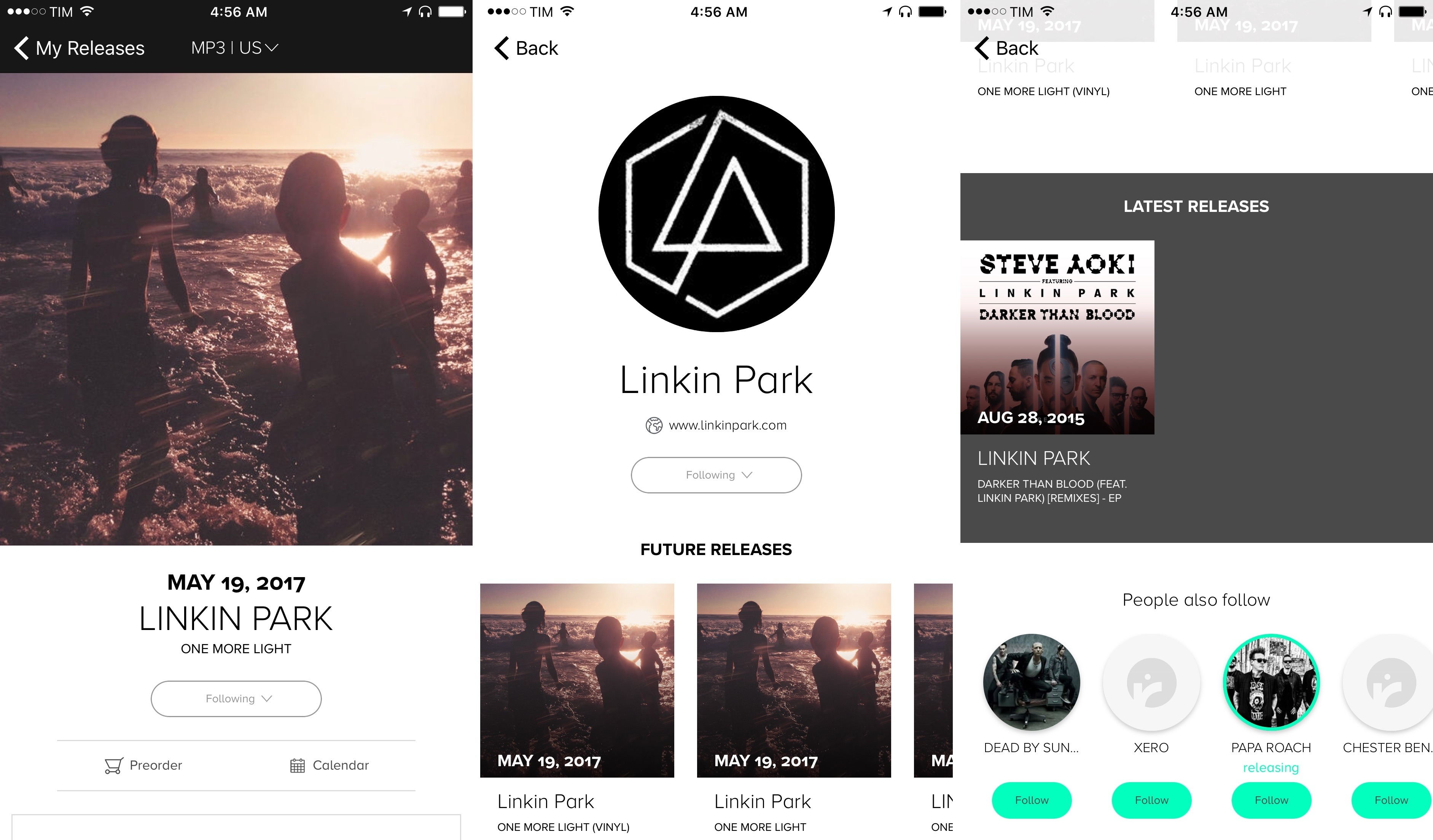 But there’s more. In addition to a complete feed of every new release you care about, Record Bird matches artists and songs with YouTube videos and articles about them from music blogs and magazines; finally, it categorizes releases based on media (such as digital, CD, vinyl, and even DVD), type (single, album, EP), and it contains filters for reissues and karaoke versions (which I disabled).

The result is unified dashboard of everything you would want to know about new music releases that goes beyond letting you stream songs from this week’s most popular artists. Record Bird is the daily feed for music lovers that Connect should have been, and I find myself opening it every day to discover or listen to something new.

Because Record Bird has been built around discovery of new music, it cuts to the chase. If new songs have been released since you last used the app, the next time you launch Record Bird you’ll be presented with a swipeable carousel of cards listing what’s new. You can expand a card to show buttons to buy or stream a song, as well as view related news (in the example below, a YouTube video associated with a newly released song). 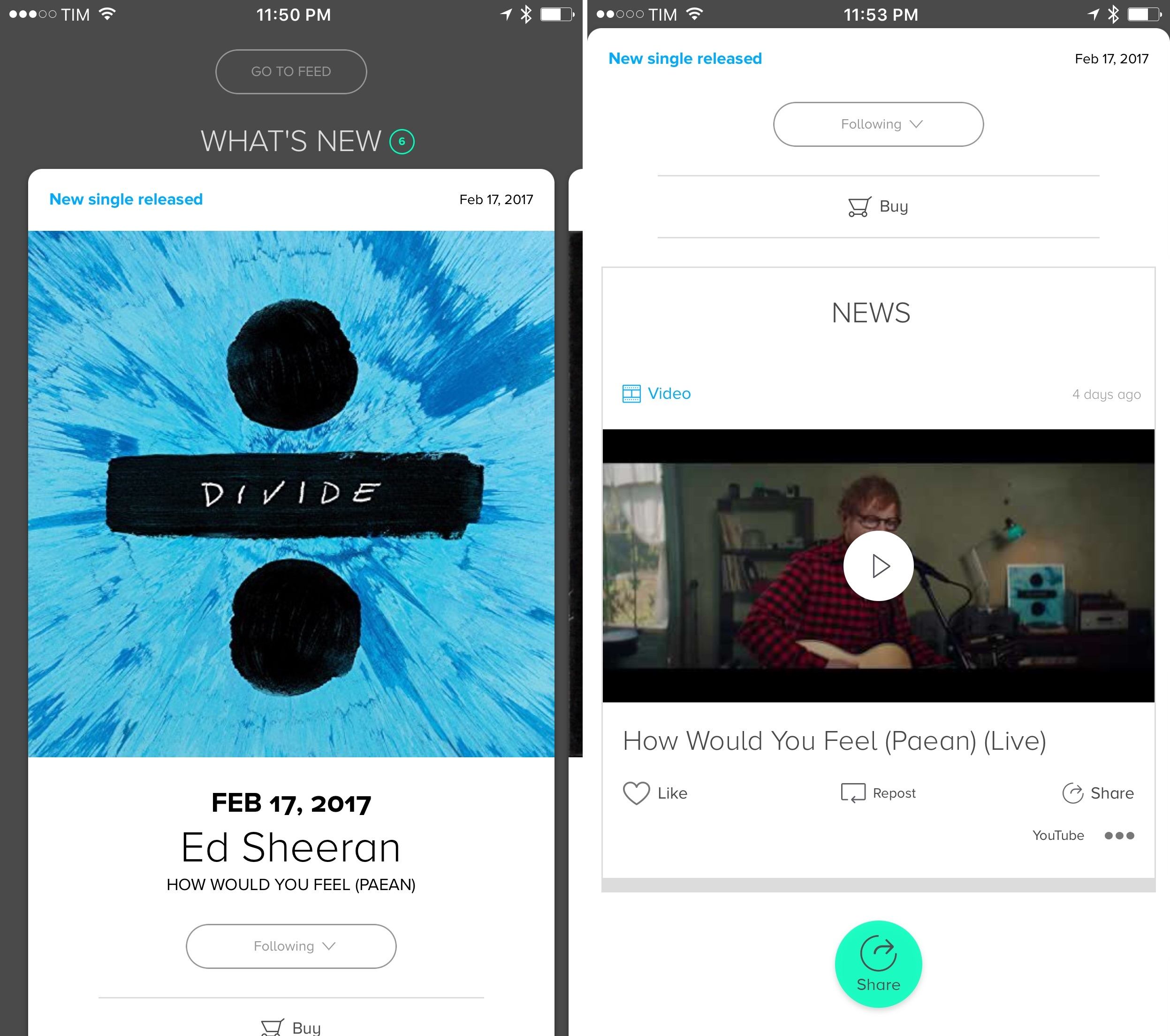 The new releases feed is the main attraction of the app, but I’ve also found the My Releases section to be a worthy complement to Apple Music. In this page, Record Bird shows separate feeds for records that have been released by artists you follow (effectively, a summary of the main feed), but, more importantly, it lets you check what is coming next from artists you have in your music library. 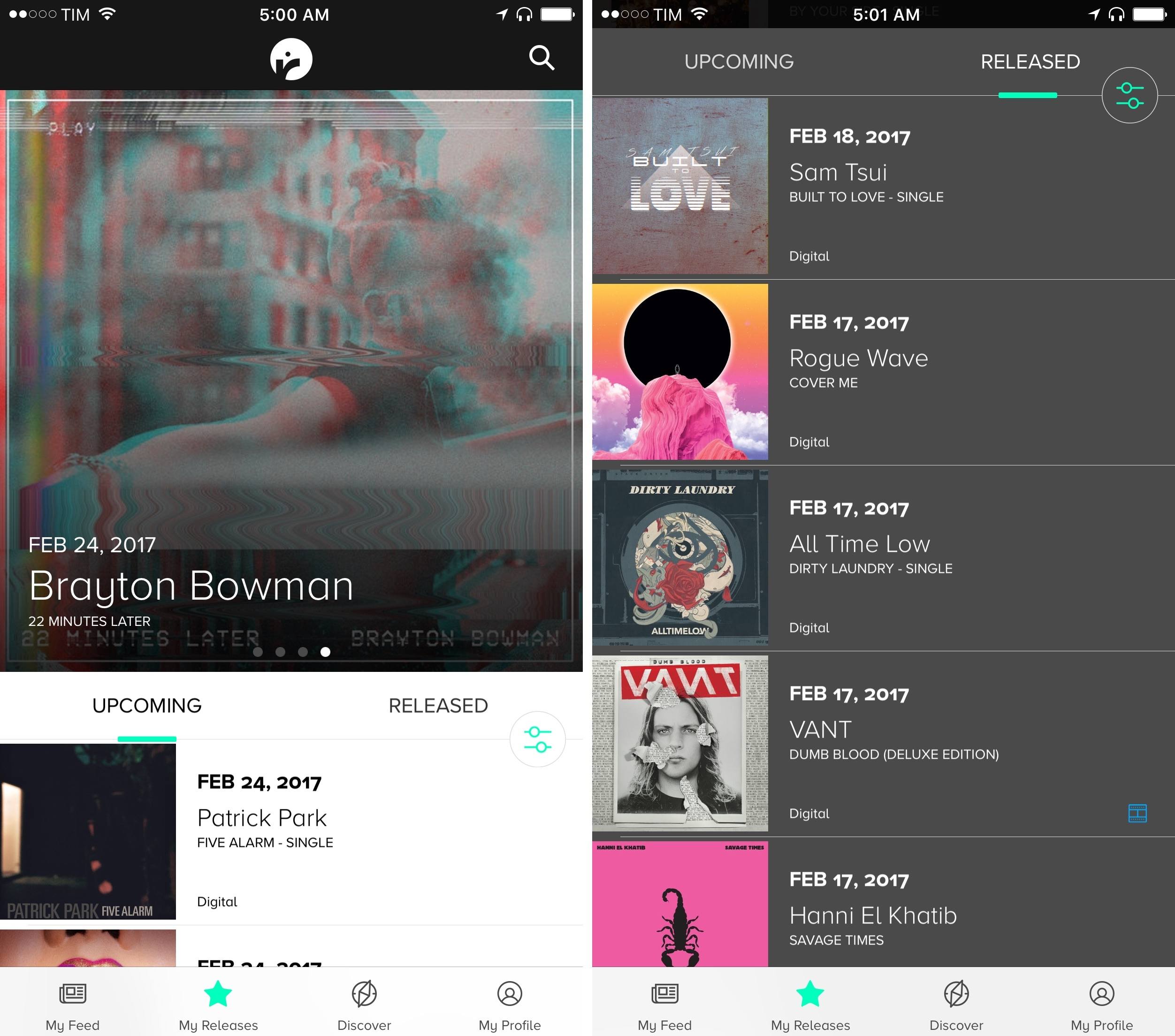 The ability to know when something new from a favorite artist will be released is one of the major shortcomings of Apple Music. While Apple’s service doesn’t show any date on pre-release albums, Record Bird aggregates upcoming releases for all followed artists, sorts them by date, and tells you when, exactly, a new record is coming out. 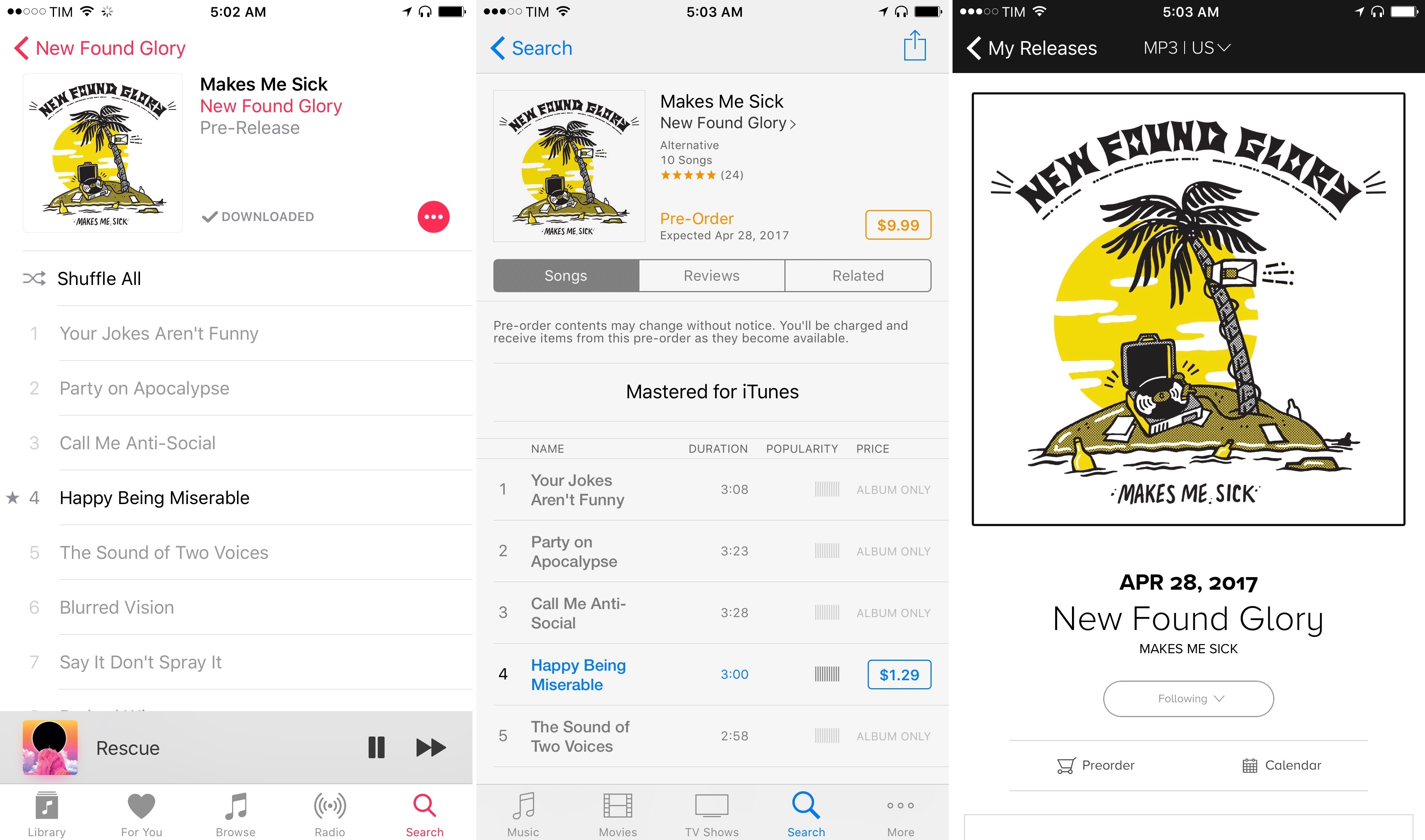 What’s even more confusing is that the iTunes Store does include release dates in the interface to preorder albums, while such detail is perplexingly missing from Apple Music. Record Bird handles everything with a UI that makes sense and that even offers the option to add a release to your iPhone’s Calendar. Once again – a feature built for music lovers that I would have expected Apple to consider.

Record Bird also comes with a Twitter-like social layer to like releases, follow people, and be followed by others, but that aspect isn’t appealing to me (and it wasn’t with Ping either). There’s a Discover page where you can browse a collection of curated lists, “People also like…” recommendations, and other “Best In” playlists, but I don’t believe this section plays to Record Bird’s strengths. I’ve been impressed with search (which can filter by artist or release) and with artist pages, which display shortcuts to recent releases as well as related artists. A nice touch: if an artist is in the process of releasing a new record, the app will put a green “releasing” badge under their name.

In just a couple of months, Record Bird has become the dashboard for music culture that I would have liked Apple Music to be. I open the app multiple times every day to read music-related articles, watch new videos, and mark dates for upcoming releases in my calendar. If I forget to open the app, Record Bird sends me notifications for new releases, too. Unless I’m searching for a specific band or album, these days most of my streaming sessions start from Record Bird because I can easily discover something new from the app’s feed and then stream it.

After years of searching my ideal New Music Releases app, I’ve found what I’ve always wanted in Record Bird. Apple could learn a lot from what this team has built so far. If you love music and love knowing about new music every week, you need Record Bird in your life.

Record Bird is available for free on the App Store.