The ability to open specific sections of the Settings app isn’t new in iOS 13.1: for several years now, Apple has offered a prefs:root URL scheme designed to launch the Settings app at a specific path. For instance, prefs:root=Bluetooth can open Settings’ Bluetooth page, while prefs:root=ControlCenter&path=CUSTOMIZE_CONTROLS can navigate directly into Settings ⇾ Control Center ⇾ Customize Controls. You get the idea.

Historically, Settings URLs have been affected by two main problems: Apple’s tendency to either break them in new versions of iOS or reject apps that implemented them citing usage of private APIs, and the inconsistent text format used in the URLs themselves. The prefs:root URL scheme goes back several years in iOS’ history, and we’ve seen apps (such as the popular Launcher) implement support for them by letting users open the Settings app at a specific path. A quick Google search demonstrates how, over the years, others have tried to put together a list of all (or, at the very least, the most popular) URLs supported by Settings.

Following two big launches on MacStories last month, I needed to work on something different and fun1, so I decided to spend a few days documenting all the Settings URLs – for main pages and sub-sections – that I could reliably open in iOS and iPadOS 13.1.

I used pre-existing work as the foundation for my research: I went through old lists of prefs:root URLs (primarily these two) and re-tested each URL for iOS and iPadOS 13.1; some of them were still working, others required an update. Then, I turned my attention to finding the URLs for new Settings pages Apple added over the past couple of years and – the most time-consuming task of all – I tested every single sub-page too.

There is no automated method for discovering Settings URLs or scraping the Settings app: I had to guess each one by starting with the title of each page (in English), trying different encoding and capitalization formats, and attempting to launch it via Shortcuts. It took a while, but it was exactly the kind of boring, repetitive task I needed to take my mind off the iOS 13 review.

Below, you’ll find a list of the 120+ Settings URLs I was able to test in iOS and iPadOS 13.1, grouped by section and listed in the same order they appear in the Settings app.

Some notes on these URLs: 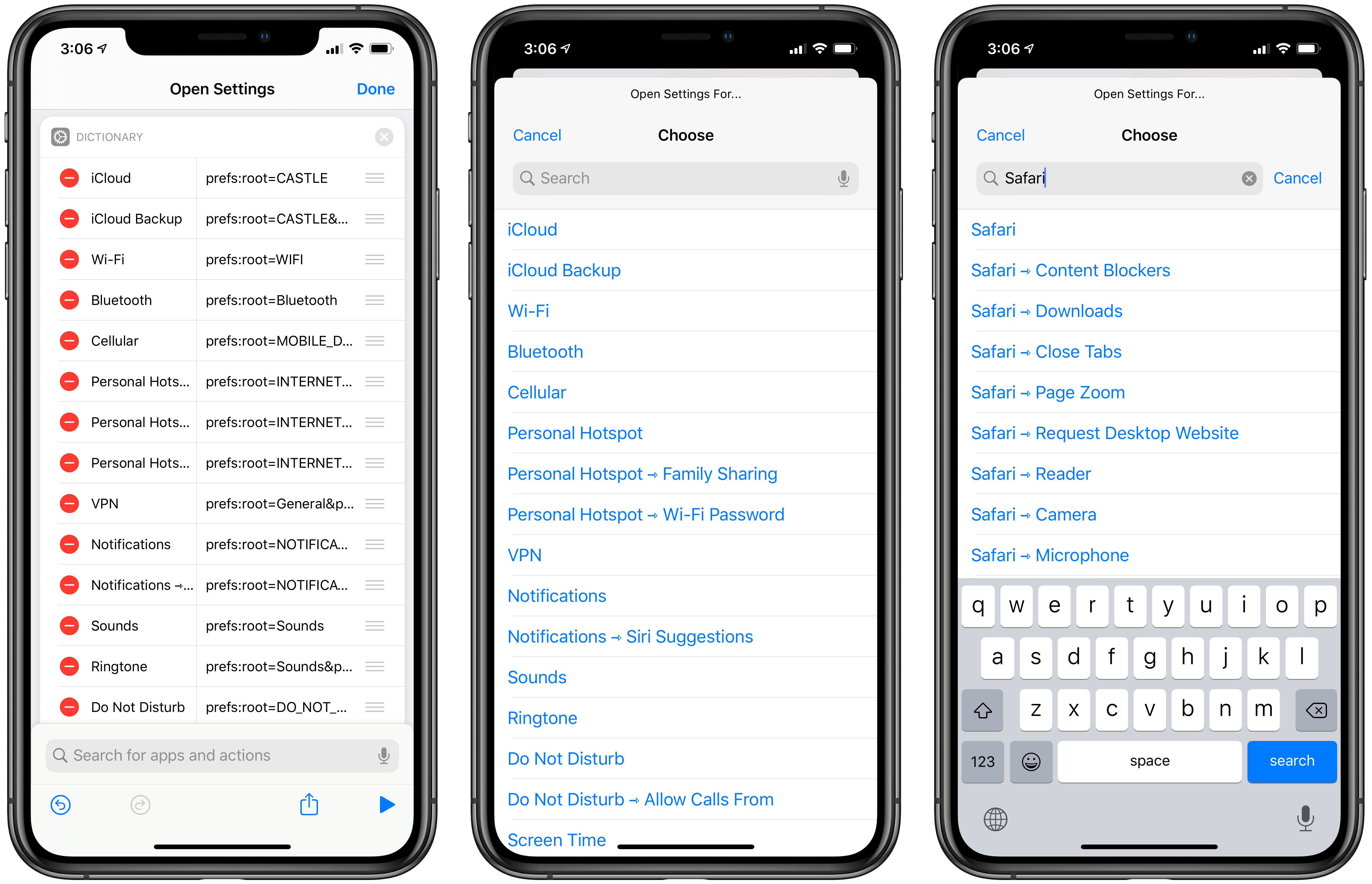 My shortcut to open specific pages of the Settings app. You can take any URL and make a separate shortcut for it. 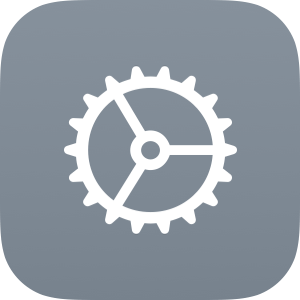 Open a specific page or sub-section of the Settings app. This shortcut contains over 120 Settings URLs, and you can choose which one to open from a list. You can also create standalone shortcuts for each URL.
The shortcut works in the app, widget, and Siri.

I’ve created a shortcut with every URL for reference purposes but, honestly, the best way to launch these URLs is with dedicated shortcuts. Grab the Settings URL you want, create a new shortcut with two actions (‘URL’ and ‘Open URLs’), paste the URL, and you’ll have a custom one-tap launcher to open any section of Settings from anywhere. This is all you need to do to open a Settings URL with Shortcuts.

My favorite way to launch specific pages of Settings is via our own MacStories Shortcuts Icons, which I’ve assigned to different shortcuts on my Home screen. In the screenshot below, you can see a few examples of my Settings launchers for Control Center, Camera settings, and Software Update based on MacStories Shortcuts Icons (including one that will be part of the next free update to the pack).

My Home screen is still in flux (mostly because Silvia made too many icons to choose from, which is a good problem to have), but I like where this is going: 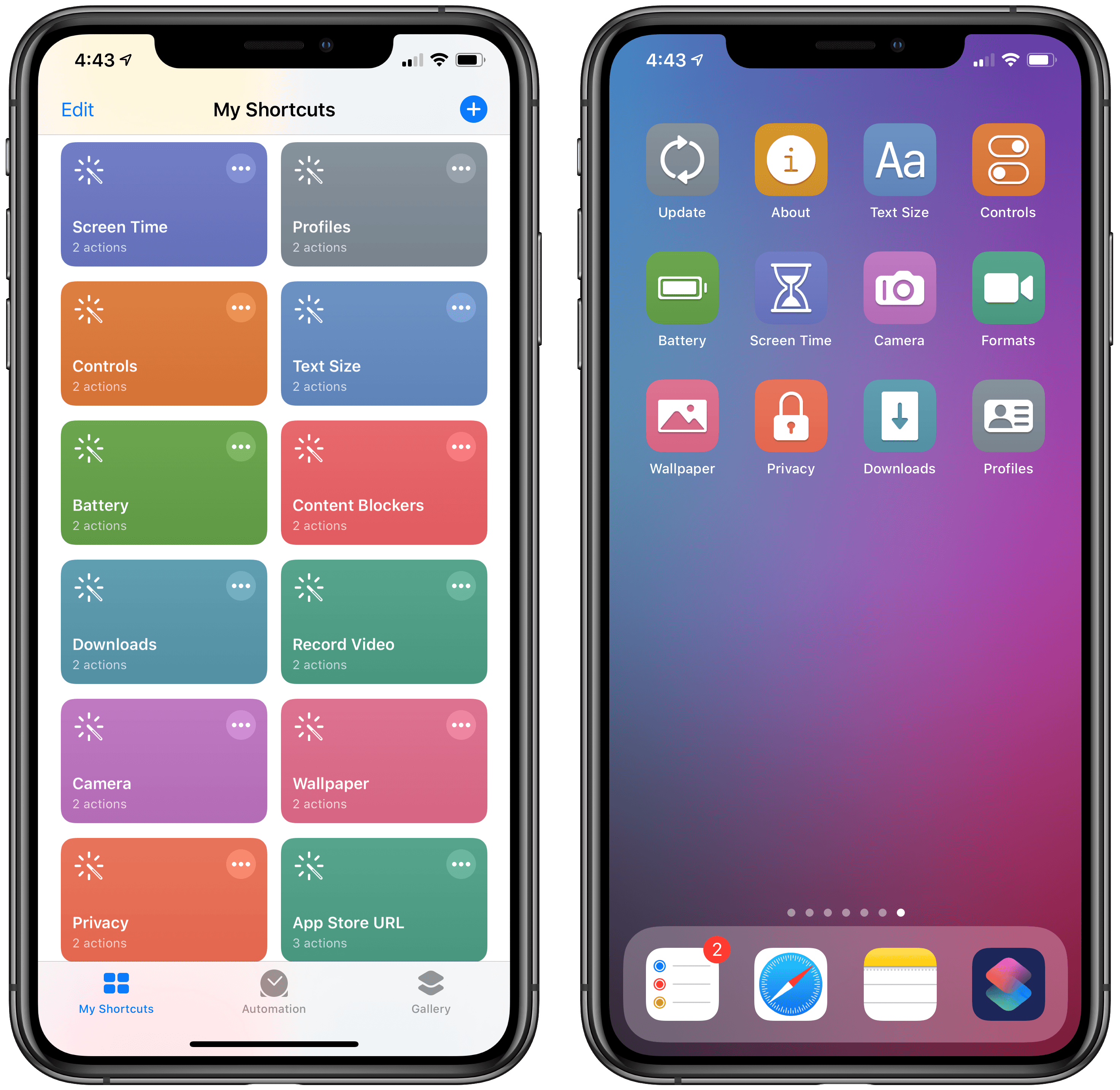 Settings shortcuts on the Home screen (right). The “info” icon will be part of the next free update to MacStories Shortcuts Icons.

You can buy MacStories Shortcuts Icons using the button above, or read more details here.

It is my goal to keep this list of Settings URLs up to date over time, and I hope that Apple won’t remove the ability to launch prefs:root URLs via the Shortcuts app in future iOS or iPadOS updates.