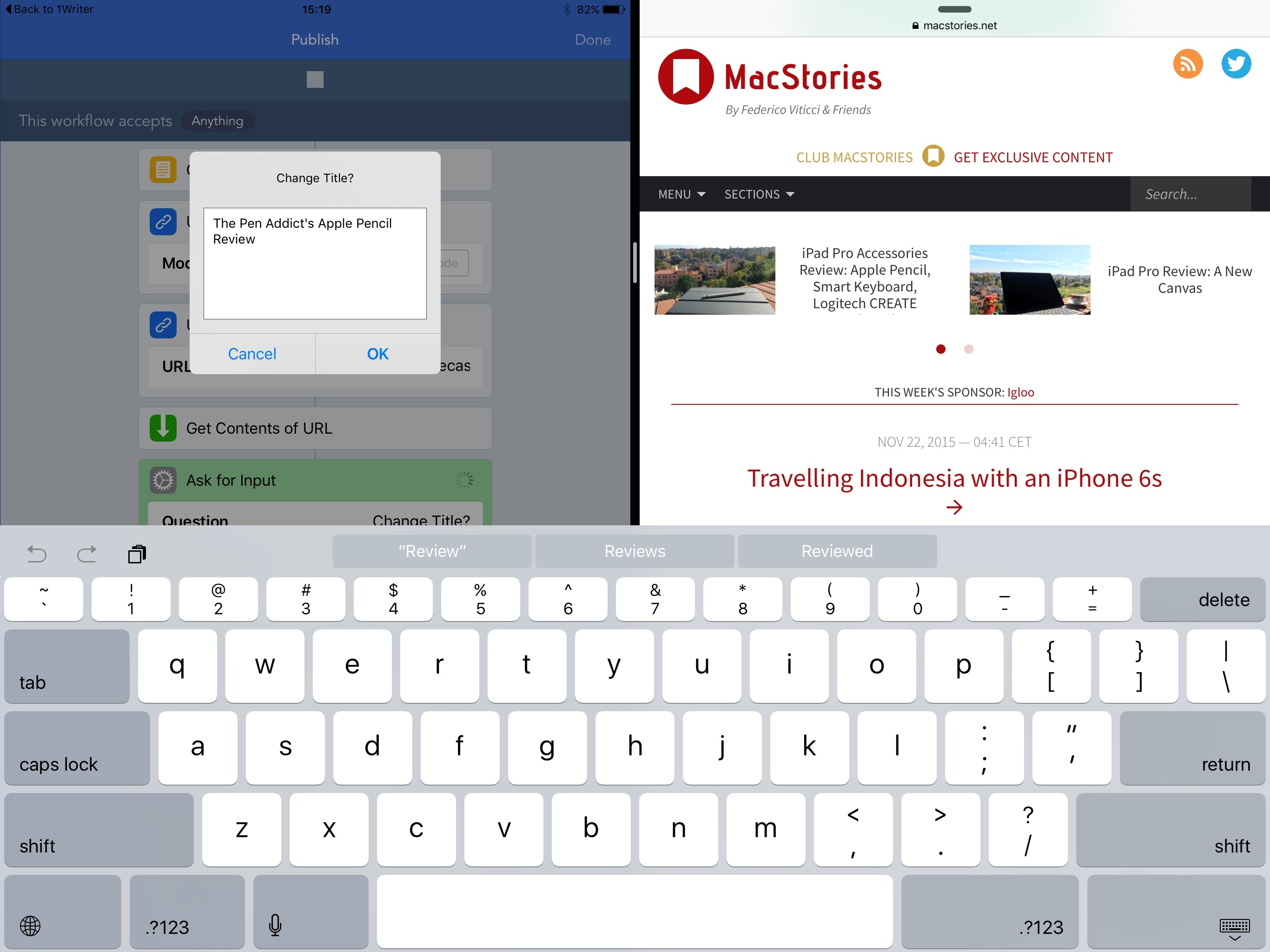 Posting to MacStories with Workflow.

For the past two years, I’ve been publishing articles and linked posts on MacStories via Python. This inelegant solution was my only option to automate the process of publishing directly from Editorial (most recently, 1Writer): when it comes to writing on iOS, I’m too fussy to accept primitive copy & paste into WordPress’ official client. Despite its minimal GUI, crude Python code, and lack of advanced features, my ‘Publish to WordPress’ script served me well for two years.1 99% of my MacStories articles since late 2013 have been published with it.

Still, I knew that something better would come along eventually. When the Workflow team pinged me about a new action they were developing to enable WordPress publishing from the app, I couldn’t believe they were considering it. Workflow, an app that I employ on a daily basis to speed up core parts of my job, combined with the single task that powers my entire business – posting new content. It was almost too good to be true.

Fortunately, great things do happen in the third-party iOS ecosystem. Today’s update to Workflow (version 1.4.2) adds, among more actions, a brand new WordPress action to publish posts and pages to configured WordPress blogs (both wordpress.com and self-hosted ones) and which can be combined with any other existing action or workflow for deeper automaton. After using a beta of this action for the past few weeks, I can say that it’s, by far, the best automated publishing workflow I’ve ever had, and I don’t want to go back to anything else.

END_OF_DOCUMENT_TOKEN_TO_BE_REPLACED 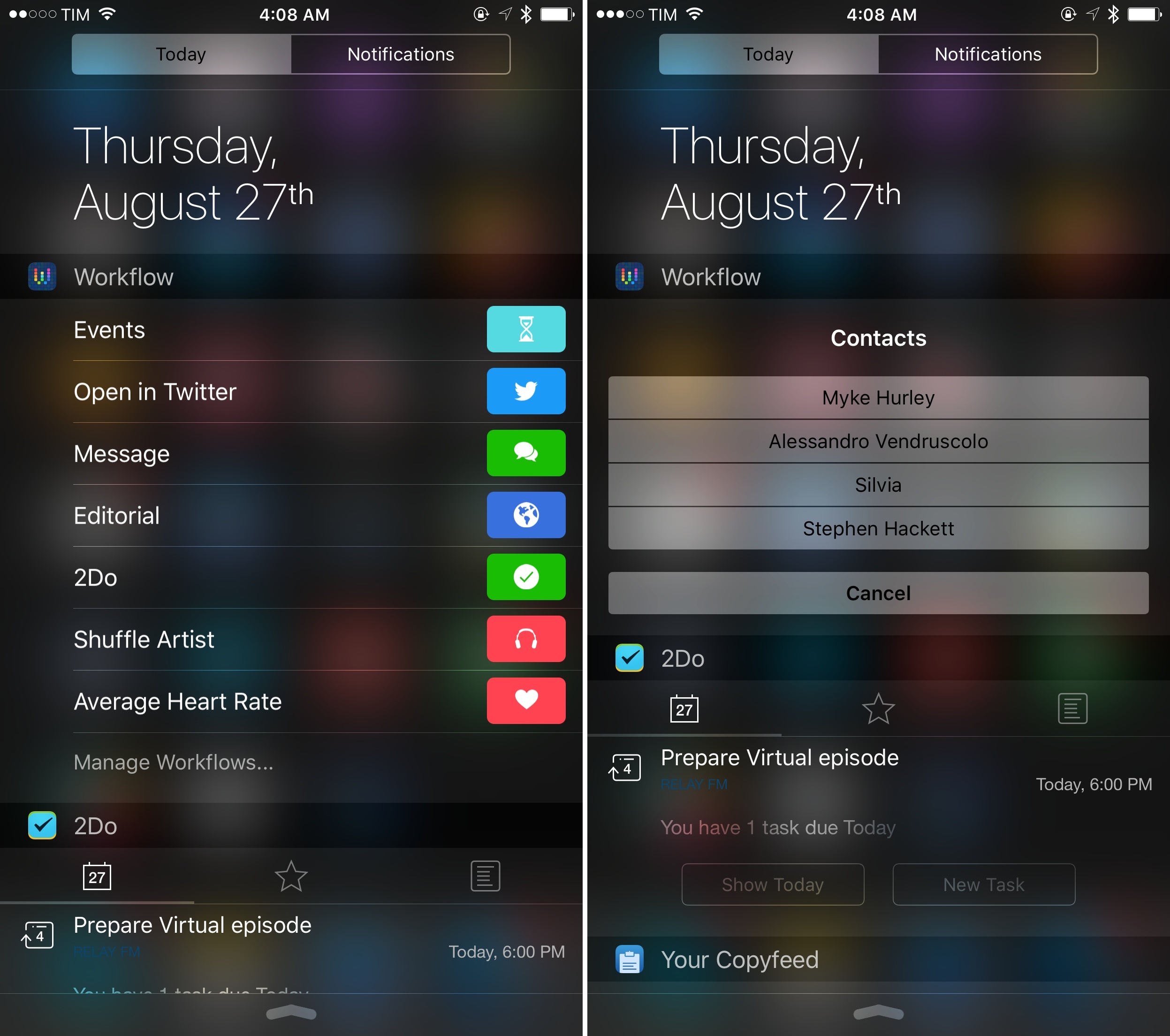 Since its debut on the App Store last year, Workflow has established a new paradigm for automation on iOS.

By deeply integrating with iOS apps, device hardware and sensors, an array of web services, and advanced actions for scripting and control flows, Workflow has shown how automation – for many an area of computing that evokes thoughts of old desktop apps and arcane scripting languages – can be reimagined for the iPhone and iPad while being fun and powerful. Workflow is one of the reasons behind my decision to go all-in with the iPad as my primary computer, and the Apple Design Award it won in June is testament to the amazing work by the app’s young and prolific team.

Workflow 1.3, launching today on the App Store, is another major step forward for the app, bringing a powerful Today widget, sync between devices, new Health actions, and more.

END_OF_DOCUMENT_TOKEN_TO_BE_REPLACED

After reinventing mobile automation by combining an interface reminiscent of Automator with deep integration on iOS, Workflow – one of my favorite apps of 2014 – is coming to Apple Watch. Launching today with version 1.2 of the app, Workflow will allow users to run workflows directly from their wrist, with some new features built to take advantage of communication between the iPhone and Apple Watch.

END_OF_DOCUMENT_TOKEN_TO_BE_REPLACED

I missed this last week, but Drafts has been updated with a useful Workflow integration to easily create actions that can trigger workflows with text. From the Agile Tortoise blog:

Drafts 4.1.2 has added a new “Run Workflow” action step to provide integration with Workflow app from Desk Connect. This step makes it easy to fire an workflow in Workflow app with a single tap. The action step can be configured with the name of a workflow, has a template to construct the text sent to the workflow and optional flag for whether to return to Drafts after execution. Under the hood, Drafts is constructing x-callback-url URLs to trigger the workflow, but this makes it much easier for the novice user than constructing them yourself in Open URL action steps.

Similarly, the latest version of Workflow has added a shortcut to create a Drafts action:

As an added bonus, the latest update of Workflow has added an option, when viewing settings on a workflow, to “Add to Drafts”, which will open Drafts and automatically create an action, setup with a “Run Workflow” action step, ready to go. This feature will be rolling out over the course of the next couple of days, so if you do not see it immediately in Workflow, try again later. For more details, read the Run Workflow action step documentation.

I’m using this to quickly send links copied from Twitter (which still doesn’t support the iOS 8 share sheet) to Workflow via Drafts, and it works well.

Speaking of Drafts, the app is coming to Apple Watch. 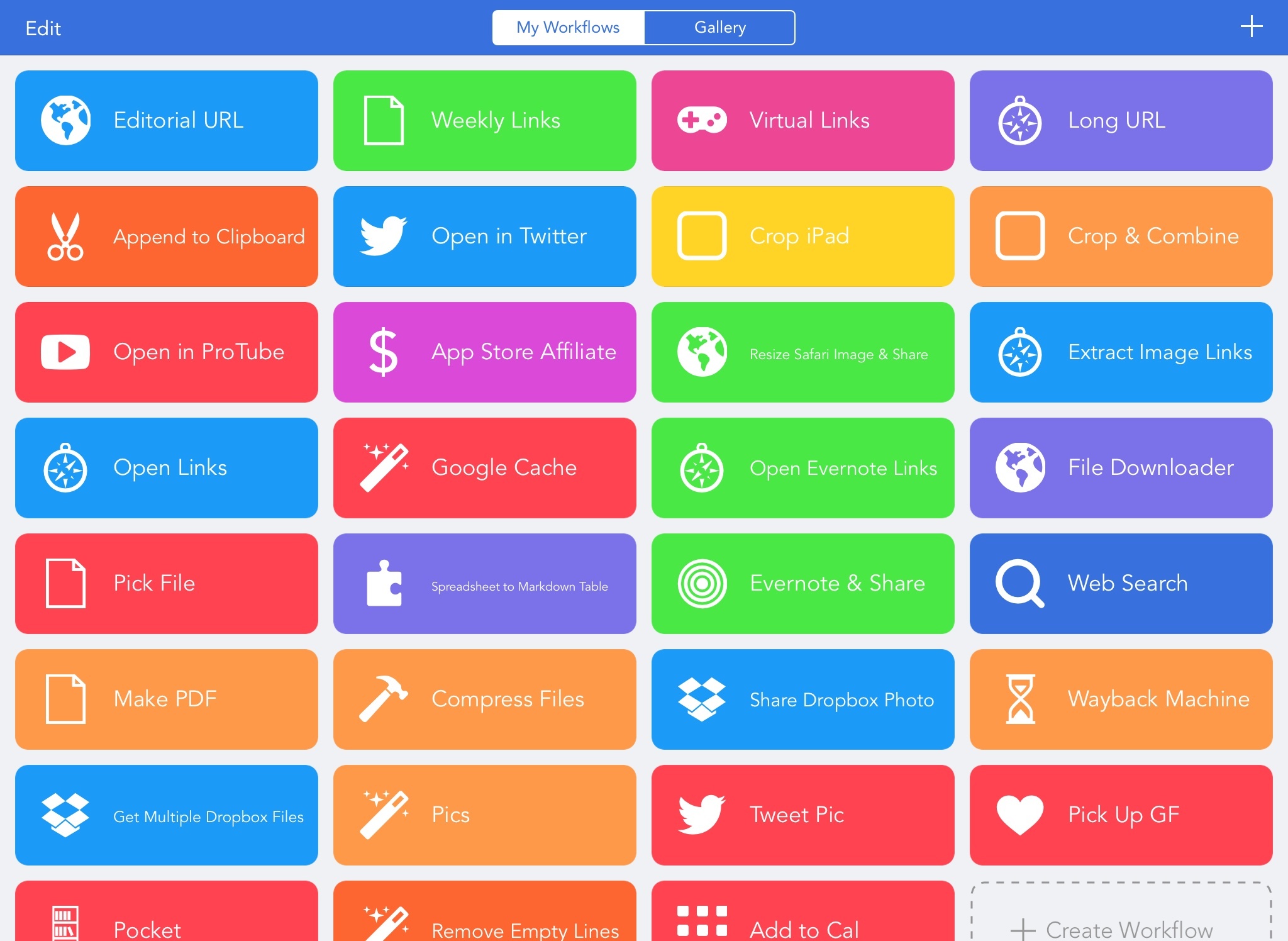 Released by a small team of indies in December 2014, Workflow reinvented iOS automation. Combining an interface reminiscent of Apple’s Automator for OS X with easy access to native iOS features such as Safari, the photo library, and iOS 8 extensions, Workflow promised to make automating tasks on an iPhone and iPad a simple and pleasant affair. The results spoke for themselves: Apple selected Workflow as Editor’s Choice, the app trended for weeks in the App Store’s Top Charts, and thousands of users released interesting and useful workflows in various online communities. MacStories readers may remember that Workflow was my iPad app of the year.

Workflow is one of those few apps that have dramatically changed how I work on my iPad. For me, the point of using Workflow isn’t to put together chains of actions to show off the app’s power – I just want to save time I can spend doing something else. While I have fun experimenting with Workflow and understanding its capabilities, ultimately the app just sits there in the background, waiting for me to call a series of actions I need. I love Workflow the most when it’s summoned for those two seconds and it does something magic that would have normally required minutes of manual interaction. Things like appending links to Evernote, converting spreadsheets to Markdown tables, or adding text to the clipboard.

Workflow fits my routine like a glove. I’ve used it every day to automate aspects of my work that speed up how I write and communicate on my iOS devices. And with Workflow 1.1, released today on the App Store, its developers are further expanding the app’s capabilities with powerful new functionality that includes filtering, better conditionals and image manipulation, URL expansion and deeper calendar access, and even the ability to open multiple links at once in a web browser.

Version 1.1 of Workflow includes over 50 new actions and dozens of fixes, improvements, and changes to existing actions. Core parts of the app have been revised for a faster experience and the foundation laid with the Content Graph has started to pay off with the addition of metadata and filters. Because I’ve been playing around with Workflow 1.1 since the app’s original release two months ago, I’m going to offer some practical examples with a high-level overview of the changes.

END_OF_DOCUMENT_TOKEN_TO_BE_REPLACED 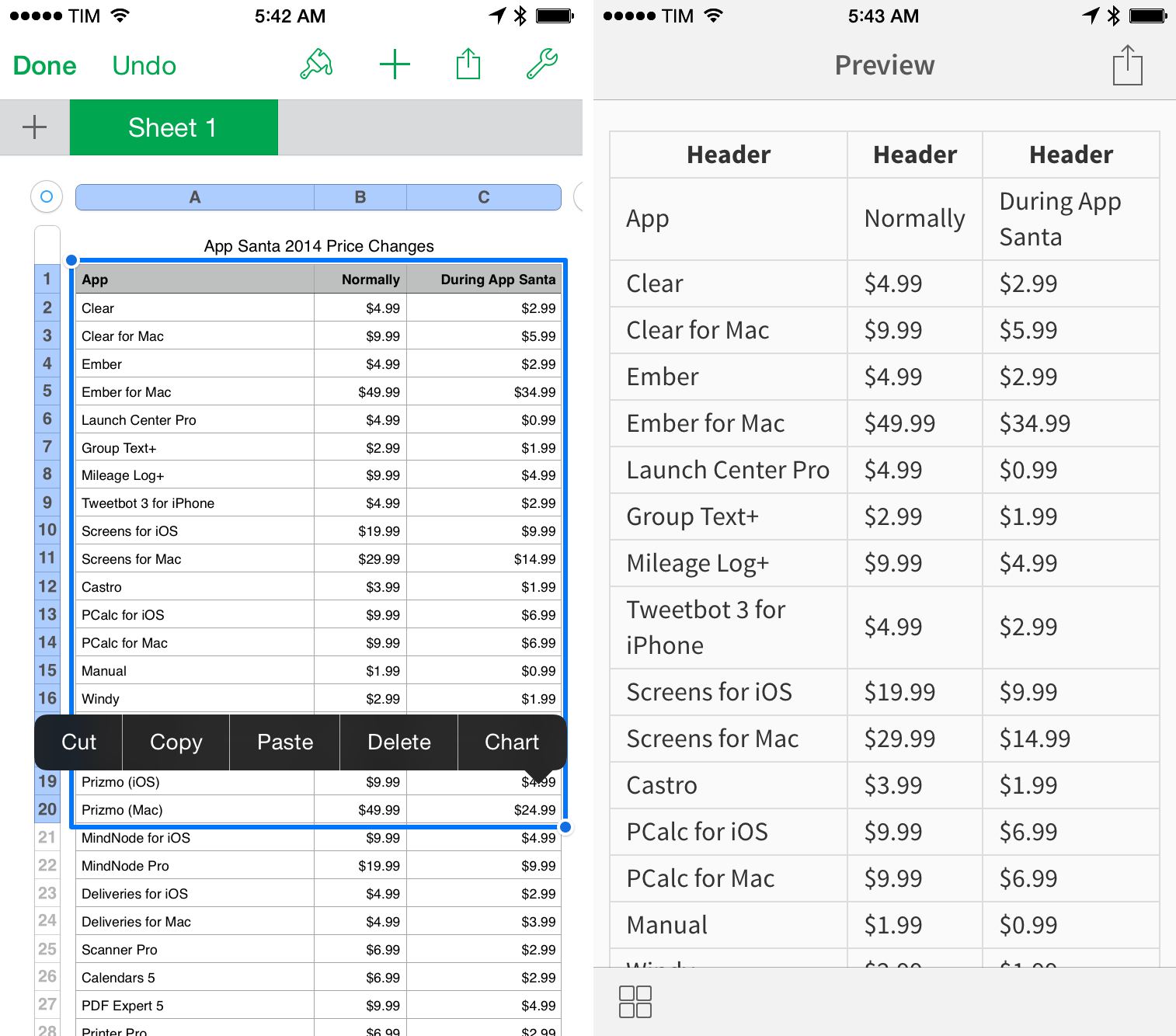 Going from a spreadsheet to a MultiMarkdown table with a workflow on iOS.

This is a proof of concept that I put together out of curiosity today, and it’ll likely break for some documents or Microsoft Excel, but it’s been working well for me, and I thought I’d share it.

I created a workflow that converts colums/rows copied from spreadsheets in Numbers and Google Sheets to a MultiMarkdown table.

END_OF_DOCUMENT_TOKEN_TO_BE_REPLACED 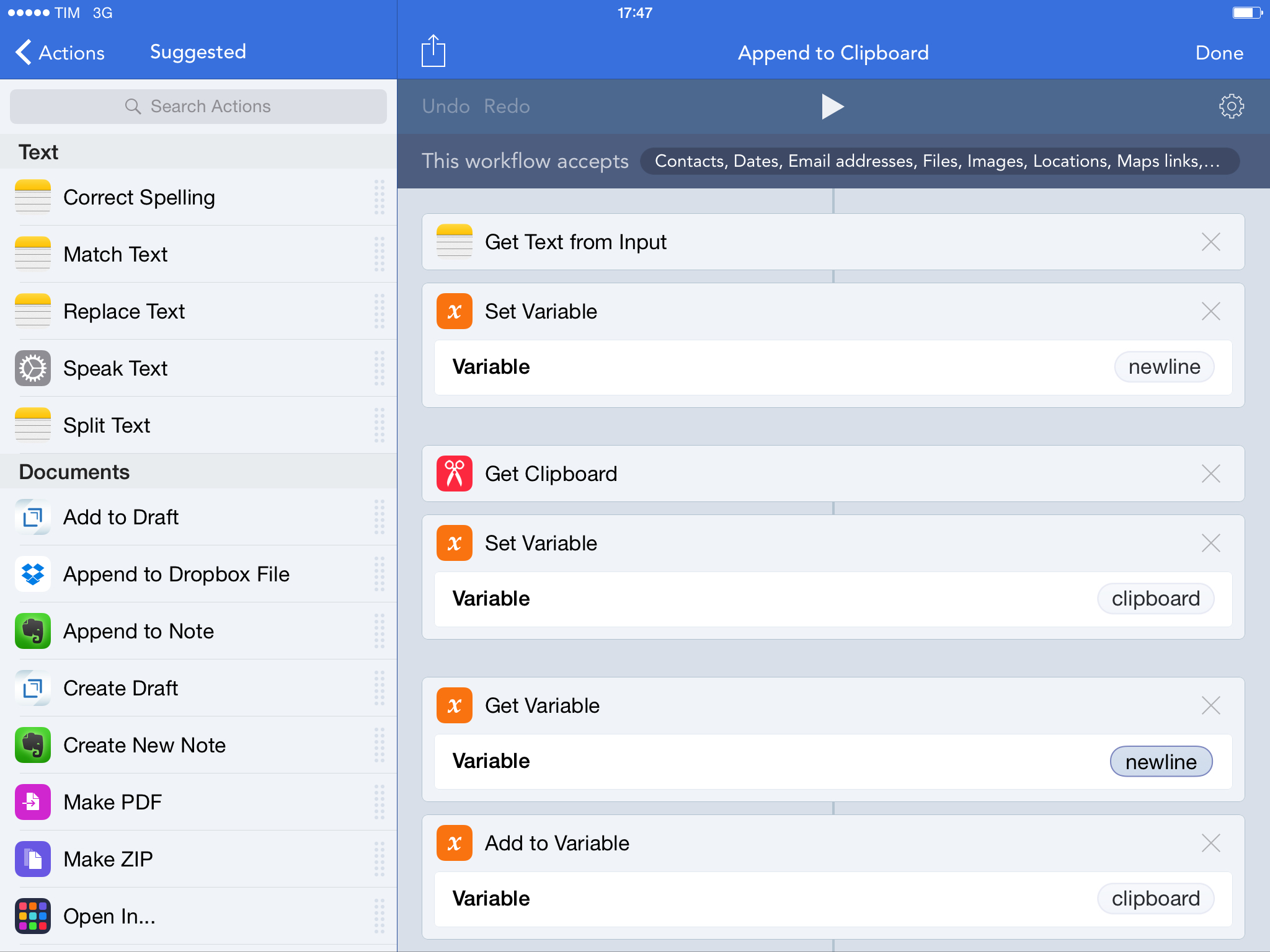 If you do any sort of note-taking or writing on iOS, you probably find yourself wishing you’d be able to copy separate bits of text in the clipboard simultaneously. While that’s still not possible because the iOS clipboard only supports one entry at a time, the process can be sped up with Workflow.

A few weeks ago, I wrote about how I was looking for an extension to append links to an existing note through the system share sheet. I eventually downloaded NoteBox, which has an iOS 8 extension that can quickly capture any string of text and that has a merge feature to collect separate notes into a single one. That wasn’t perfect, but it allowed me to collect dozens of tweets and prepare them for a blog post on MacStories in just a couple of minutes.

With Workflow, I came up with a better system that uses extensions and the ability to append text to the iOS clipboard. This is the workflow I use, which does three simple things:

In practice, this means that, using any app capable of showing the share sheet, you can add some text to your clipboard as a new line without convoluted steps of manual copy & paste. Want to add some tweets to a link you copied? In Twitterrific, run the workflow on those tweets and they will be added to the clipboard. Multiple links in Safari or RSS? Copy the first one as you’d normally do, then add more through the workflow. You won’t have to manually merge the contents of the clipboard as long as you use the Workflow action extension to append text.

I’m using this workflow every day to end up with a clipboard that contains multiple links, email addresses, or generic strings of text, and it’s been a great timesaver. You can download the workflow here. 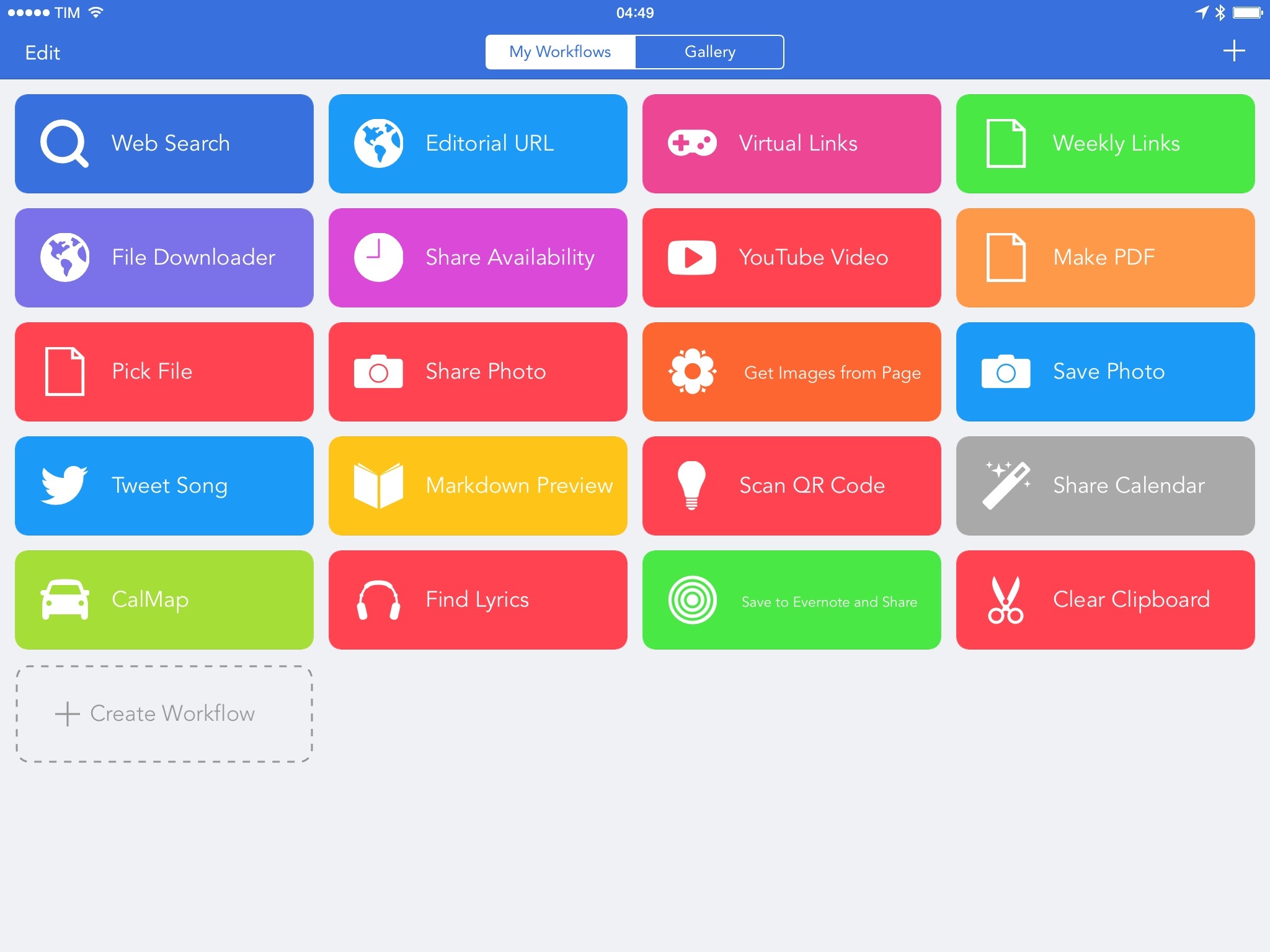 In the years I’ve spent covering iOS automation, I’ve often asked for a mobile version of Automator. Workflow, released today, tries to bring the deep system integration of Apple’s OS X utility to the iPhone and iPad, taking advantage of extensions in iOS 8 to make its automation features ubiquitous and compatible with any app.